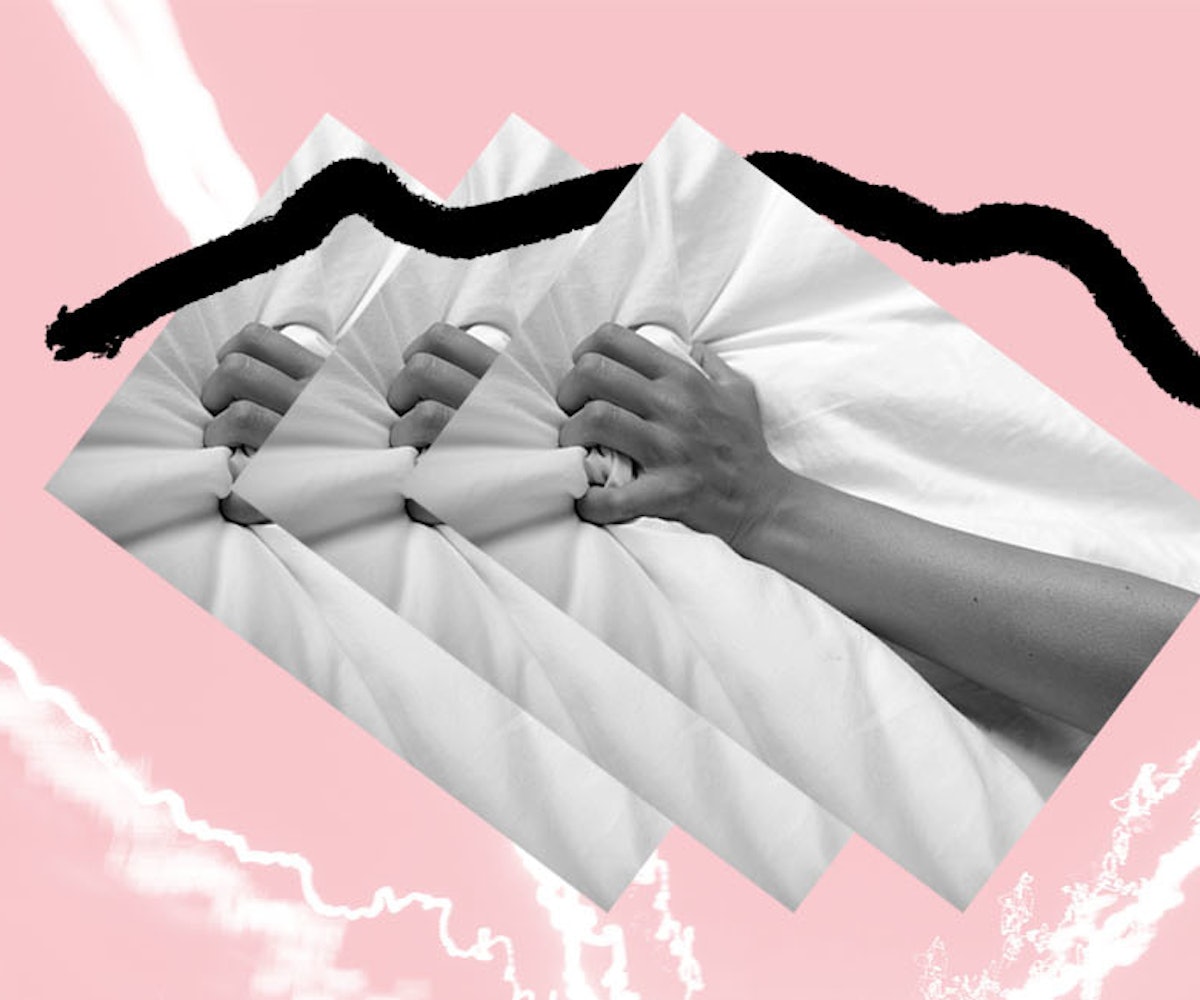 At first, empathic orgasms might sound like they're just 2019's version of simultaneous orgasms—i.e. you and your partner orgasming at the same time. But whereas simultaneous orgasms happen because of shared physical responses between you and your partner that lead to you both coming at exactly the same time, empathic orgasms happen when you're so in sync with your partner that you both come at exactly the same time without either of you even touching each other. Instead, they happen based purely on empathy—that is, feelings.

"Empathic orgasms are the result of our bodies being in such a heightened state of arousal and feeling such intense pleasure from our partner's pleasure that we move through the sexual response cycle with little to no physical stimulation," says sex coach Myisha Battle. "Our whole bodies are sexual. It's hard to separate mental, emotional, and physical arousal because they all feed off of each other and allow us to move through the sexual response cycle." The cycle Battle references involves stimulation, arousal, plateau, and orgasm.

But, even knowing how complex orgasms can be, we do usually associate them with physicality, which is why empathic orgasms can be a surprise—especially if you've never had them before.

"It's shocking to me that I can come without being touched," says Kristen*, a queer woman in Los Angeles who first started to experience empathic orgasms when she first connected with Chris*, her now-girlfriend, a few months ago. "When I know that Chris is coming I can come at the same time—her orgasms get me off. There are times that I am doing things to her body and I can feel the orgasm building inside me when it's building for her."

"I could feel that I was reaching the point of no return and was about to come, knew it was inevitable, but each time it's happened—half a dozen, maybe—I've been shocked because I didn't think that it was a real thing, or possible," Chris says. She compares how empathic orgasms feel as being akin to the feeling of orgasms in dreams. "The orgasms themselves are really satisfying, but closer to a 'wet dream' orgasm [...] I wake up after a really hot sex dream and can feel the contractions of my orgasms, but I didn't have any physical contact to make them occur."

And empathic sexual response isn't limited to orgasms. It can be as simple as getting turned on (or off) just because a partner is turned on (or off). The authors of a 2008 study on empathic sexual response published in the Journal of Sexual and Relationship Therapy say it's a little like fainting when you see someone injured or giving birth; your autonomic nervous system responds to their trauma. With empathic orgasms, your response is to their pleasure, instead. So, even though some conscious thoughts can be involved—similarly to how you can turn yourself on or even orgasm just from fantasy or porn—the empathic response comes from your autonomic nervous system, genitals, and more. But, differently to how that works when you're fantasizing, the person in control in the moment of an empathic orgasm is essentially your partner and their desire. If they're really, really turned on, you'll end up really, really turned on. If they come really intensely, you'll come, too.

If this sounds far out there, it's not. Almost everyone has an empathic sexual response at some point. In the 2008 study, over 95 percent of participants—who were limited to heterosexual women and men—reported experiencing empathic turn on, turn off, or both. But actual empathic orgasms seem more elusive. Battle anecdotally reports hearing about empathic orgasms only rarely, usually from "folks who use sex as an opportunity to become deeply in tune with their partner and the energy exchange that can occur during sex," which often seems to mean women.

First of all, what you actually do together matters less than being engaged in the experience you're sharing.

"All of our senses, what we see, hear, feel, taste, and smell during a sexual experience, give us cues about what our partner may be feeling," Battle says. You don't even necessarily need to be in the same room—empathic orgasms can happen during sexting. "The pleasure that you think your partner is receiving can be enough to stimulate an orgasmic response in your own body," she says.

You can learn to heighten that engagement by getting more in touch with your partner's emotional state. Battle recommends practicing this in non-sexual ways: Pay attention to what your partner might be feeling throughout the day, and check in verbally with them to see if your read is correct. Over time, you'll build recognition that will carry over into sex. "Some people have a hard time communicating verbally during sex, so the more in tune with how your partner is feeling [you are,] the more you can make adjustments to their—and your—enjoyment," she says.

Even when communicating is hard, practice makes perfect and talking during sex—saying what you like, as well as what you don't—is key to a good sexual experience of any description. "Honest communication between partners about what they need to help achieve sexual arousal and orgasm and about their level of arousal during sex will help to optimize sexual satisfaction for both partners," the study's authors write.