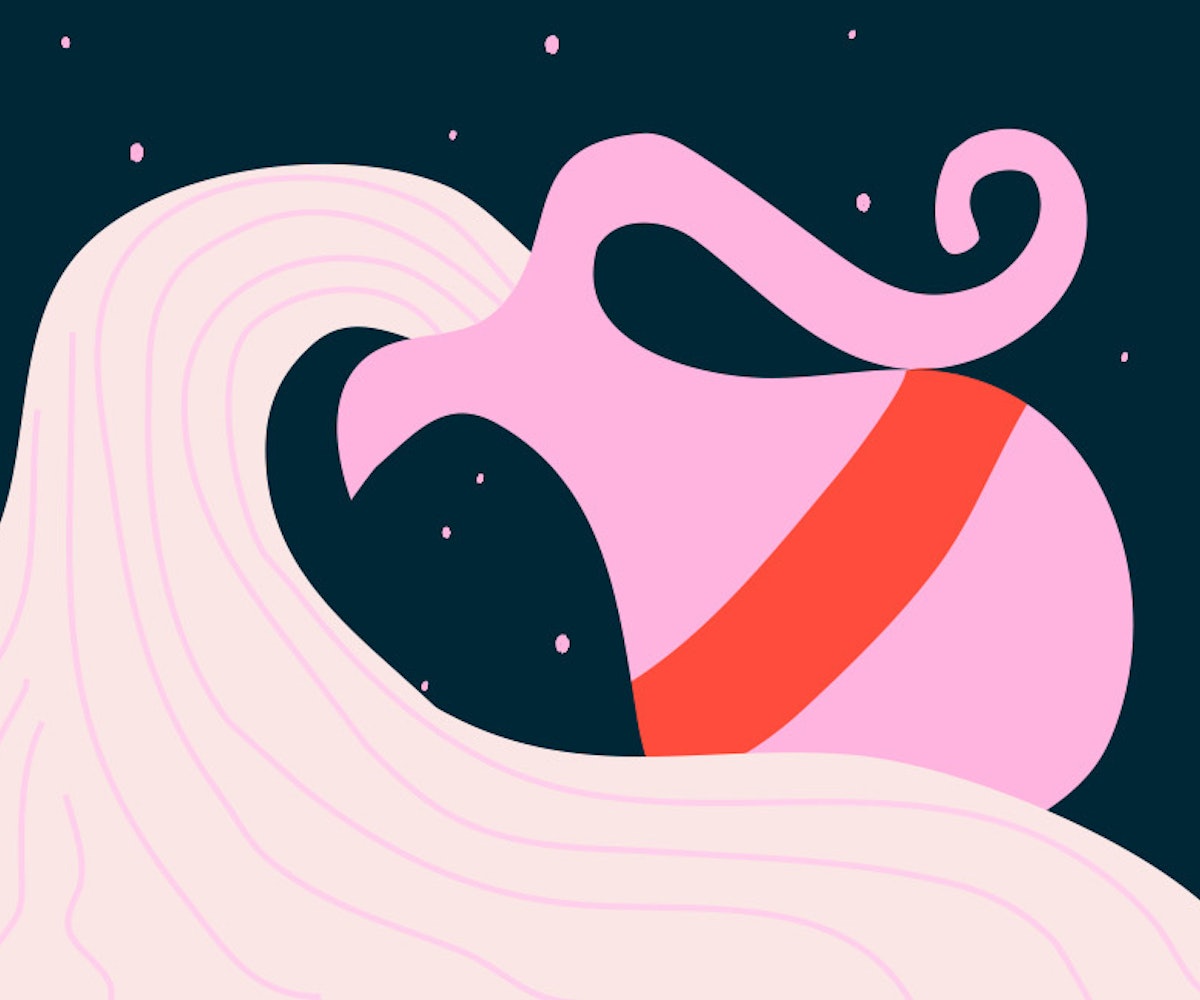 You've maybe heard of them, those Aquarius types. They're, like, supposedly aloof? But, also, they are associated with the 11th house which is the house of friendship—so they're not aloof at all. They're actually friendly? Weird. You've probably heard they're weird. Like, really weird. Alien weird. Yet they get along with most people! And, Aquarian creative types often see a great amount of success, like Michelle Tea or The Weeknd. Speaking of musicians, Sarah McLachlan is an Aquarius, and if Aquarians are so unemotional, then how come those ASPCA commercials featuring her crooning voice traumatized a generation?

To help us understand the elusive Aquarians of the world, I've asked two of my Aquarian friends to illuminate us on what being an Aquarius means to them. Apparently, Aquarians really love to talk about themselves! Read on for Aquarian wisdoms, rituals, music, and on-brand otherworldly delight.

Alina Pleskova, a queer poet of my own heart, part of my Post-Soviet Poetess Coven, and crown jewel of Philadelphia.

What is one part of your morning ritual that feels deeply Aquarian to you?

The part where I allot myself an adequate window to putter, change my outfit several times (I'm also a Libra moon, okay), put on the right tunes, get in the headspace I need to get into, pull my tarot, and make my tea, etc.—then inevitably space out about a thing or 10, start an email to someone, cancel a date, start scanning my bookshelves for whatever poem I woke up with a line from in my head, and end up rushing to get out the door in time for work.

If you could offer the person(s) you love one Aquarian gift that would improve their life, what would it be?

I want to highlight something that I feel doesn't feature in most write-ups about Aquarians. I think Aquarians have a real aptitude for finding and surrounding themselves with a vast, eclectic, and disparate tribe of friends/lovers/collaborators/chosen family. And by "surrounding," I mean having an internal hierarchy (not necessarily visible to others) of these folks, in varying degrees of closeness (because, yes, we need to protect our personhood, etc.).

But really, if you need someone with an oddly specific skill set, or a recommendation of who to hang out with in a particular city, or someone to get you on the guest list somewhere, talk to an Aquarius. If you want to know how to keep trusted people around in ways that aren't rooted in transaction or manipulation, watch an Aquarius.

Everyone seems to think Aquarians have no feelings or don't have feeling anyone else can understand. Can you describe your emotional-processing mechanism for us?

My go-to phrasing about this is, "What part of leave me the hell alone but simultaneously lavish me with affection and attention is so difficult to understand?"

I'm also thinking of this Dale Gribble line in King of the Hill: "Are you attempting to know me?"

I would describe my emotional-processing mechanism/metaphor as knowing my feelings are a vast sea, but trapped under ice, and not being at all absolved or made more self-aware by that knowledge. When you say, "Don't have feelings anyone else can understand," that "anyone" is often inclusive of me.

I feel so comfortable in the realm of ideas and ideals, possibilities and plans. Asking me to pin down, confront, or name a feeling to which I haven't assigned logic or am resolute about or have grasped intellectually (spoiler: most feelings, most of the time)—in other words, an act of exposure—is akin to someone jabbing at the ice patch with a sharp pick. When I feel someone trying to access my interiority in this way, I tend to totally withdraw. I think Aquarians feel deeply, but have trouble identifying and sharing those feelings. Like, often, I'm just buffering while trying to sort this out, but my external reaction is to seem aloof and impenetrable. I can't tell you how many partners have called me out for this behavior, ugh.

Imagine yourself as a kind of Aquarian sage. What is one thing you would advise an Aqua-baby to be careful of?

Don't date a fucking Capricorn. Don't do it.

Which Aquarian creative elders serve as compass and companions for your own work and survival?

Yoko Ono (my birthday twin sage-goddess): "You may think I'm small, but I have a universe in my head."

Audre Lorde (my other birthday twin sage-goddess): "may I never lose / that terror / that keeps me brave"

Virginia Woolf: "I belong to quick, futile moments of intense feeling. Yes, I belong to moments. Not to people."

Jenn McCreary: "distrust everything / but the hours & / the steps that led / you here."

Zsa Zsa Gabor: "I tell you, in this world being a little crazy helps to keep you sane."

WHERE CAN I READ MORE OF YOUR WORK, MY AQUARIAN FRIEND?

Though these poems have since been edited and re-edited, I would be remiss to not link to "Saturn Return," which explicitly mentions my Aquarian tendencies.

What is one part of your morning ritual that feels deeply Aquarian to you?

Not having a consistent morning ritual feels pretty Aquarian to me, given our Uranus rulership. That being said, on leisurely mornings, I will often drink coffee and watch intuitive tarot readings or do some practice natal charts, which also feels relevant.

If you could offer the person(s) you love one Aquarian gift that would improve their life, what would it be?

The power to instantaneously detach physically and emotionally from environments and relationships that are harmful. Though it may take a while to come to our senses, once the decision is made, there's really no going back, and no second-guessing.

Everyone seems to think Aquarians have no feelings or don't have feeling anyone else can understand. Can you describe your emotional-processing mechanism for us?

I have a strong Pisces influence (rising, mercury), so I can't say for sure that my process is authentically Aquarian buuut, let's see. First, there's the feeling and how it's embodied. Is it in my stomach, my throat, upper chest? Is my reaction to be nervous? Angry? Indignant? Then I have to let it steep for a while. As with most things, I need a gestation period where I kind of throw everything into the back room of my brain and wait for an answer to spit out like the Pee-wee Herman word of the day. There is a part of my emotional processing that is highly analytical, replaying and trying to see all the sides of a thing (helloooo, Virgo moon). I find that I feel most in touch with my feelings, and have the best understanding of/ability to communicate them, after I give my subconscious time to work through them and get to a succinct answer.

Imagine yourself as a kind of Aquarian sage. What is one thing you would advise an Aqua-baby to be careful of?

Nobody likes a know-it-all. Also, the rest of the world is gonna take a while to catch up to you. Be patient and gracious—a little bit will go a long way.

Which Aquarian creative elders serve as compass and companions for your own work and survival?

When I was younger, I definitely loved loved Michelle Tea, but I can't say I kept up with the astrology of elders per se. Oh, okay Gertrude Stein if we ignore all the misogyny. And, I guess we've got Ellen, too, but lately she's been a bit of a letdown...

WHERE CAN I HEAR YOUR MUSIC, MY AQUARIAN FRIEND?