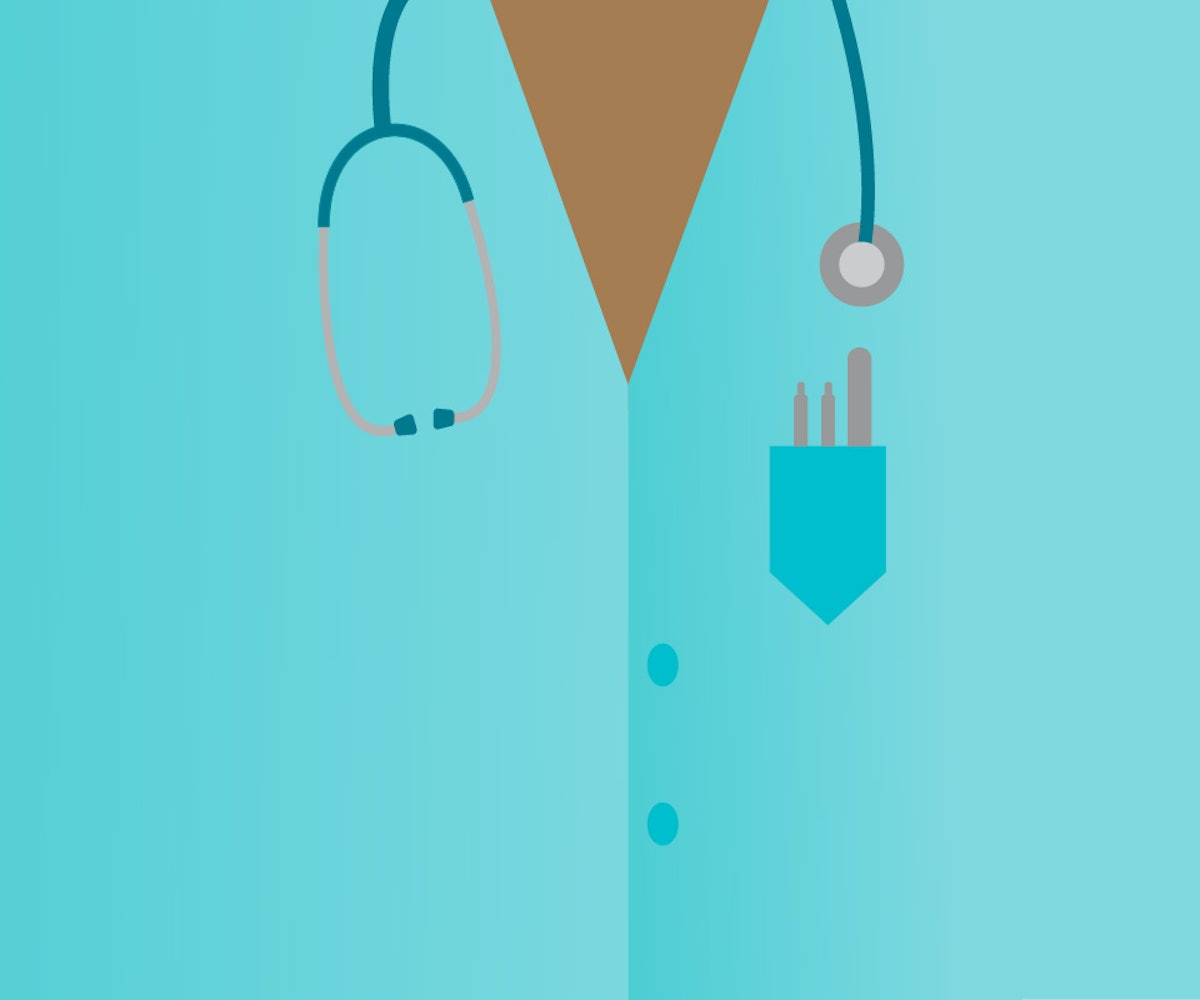 I was 18 the first time I went to the gynecologist; my mother was in the room with me when the doctor asked if I had been having sex. I responded, "no," because it was the truth. The doctor gave me a suspicious look, and, after my mother left the room, asked me again, telling me that I could be honest now that my mother wasn't there. It was clear that the doctor didn't trust me to tell the truth about my sexual history. I felt judged and like I wasn't being taken seriously. It was an experience that has had a lasting effect: I always dread my yearly appointments. And I know I'm not alone.

Negative experiences at the gynecologist vary wildly, but they almost always involve doctors who don't really listen to their patients. Stevie Boebi, a queer sex educator and YouTuber, was told to "stop lying" when she told her gynecologist that she hadn't kissed a boy—she's a lesbian. And Allison Stubblebine, NYLON's editorial assistant, says that she was judged for her sexual activity. She explains that after she asked her gynecologist about getting an IUD, her doctor "responded by asking pointed questions about why I needed birth control in the first place, and told me I was 'too young' to be having so much sex." Since this encounter, Stubblebine hasn't visited a private practice gynecologist, instead opting to frequent Planned Parenthood.

But it isn't only people who are new to visiting a gynecologist who are made to feel uncomfortable. As Lola Pellegrino, a nurse practitioner, tells me, "Many people in health care lie to their health care providers because they just don't want to get into it." She admits that she's left parts of her sexual history out if she felt that it wasn't important to the appointment, and "didn't trust the practitioner to be cool." Though Pellegrino says that she did not withhold information that may be needed for her diagnosis and only things that she didn't feel were important, it's notable that even a health care professional has felt unable to disclose her sexual history to a doctor.

Perhaps one reason for that is that so many doctors are comfortable asking probing questions about a person's sexual history, but not actually ones that demonstrate an understanding about the complexities of sexuality. Almost everyone I spoke to said that the act of sex is not talked about at all, or is spoken about as little as possible. For most of us, little more is asked than our contraceptive methods and how sexually active we are. Important issues like consent and sexual pleasure are not brought up, even though they contribute to the larger picture surrounding a woman's sexual health. Pellegrino notes that, in her own practice, she's changed her language to be more inclusive. She says, "I'll always ask, 'When you have sex with other people, is sex fun and comfortable? Is it ever not fun and comfortable?' And then, 'Are there any other questions about sex that you want to ask me right now?'" When put like that, it's clear that it isn't hard to talk about these things, but most doctors don't seem interested in trying to broaden their approaches to their practices.

This narrow-minded approach extends to many gynecologists' views on sexual orientation. Boebi notes that the topic of sex and contraceptives is very often approached in a heteronormative way, and is not queer inclusive. "My medical records say, 'Form of birth control: LGBT,'" she says. She also notes that gynecologists don't seem to understand queer identity. "They'll ask if I'm sexually active. I'll say, 'Yes.' They'll ask if I use birth control. I'll say, 'No.' They'll ask if there's a chance I'm pregnant. I'll say, 'No,'" she says, imitating the monotony of the questions. "They'll say, 'Then how?' And I'll say, 'GUESS.'" She jokes that she's "a special type of queer person because I love when people are uncomfortable," but, honestly, someone with a medical degree should be able to work out the fact that queer sex is a thing.

Ericka Hart, a queer sex educator, recalls that the first time she went to a gynecologist was because she was concerned that she had HPV, which the cis male doctor told her was impossible since she was having sex with both men and women—which, besides being patently false, feels very biphobic. "It was so dismissive of my concern and my body," she says. "I felt like he was irritated with me for even asking questions." The gynecologist's office is not where women should be scared into silence, but that's often the case.

That silence can also lead to patients being or feeling misinformed. Alison Stevenson, a comedian and actress, says that she received a PCOS diagnosis that was not fully explained to her, which led to her not fully understand her own illness. "Almost every time I'd visit my gyno, I'd be given some new brand of birth control and no other information regarding the illness and what it means for me in the long run," she tells me. "For years, I didn't fully understand what PCOS was, because my doctors never explained it to me. They'd tell me to try and lose weight and stay on birth control, and that was it. As if that's all I needed to know about a chronic illness."

Taylor Bryant, NYLON's senior editor, notes that gynecologists can be too clinical when giving a diagnosis, which can make patients upset. A couple of years ago, she says, she was diagnosed with HPV "in an almost uncomfortably casual way." Bryant says, "It ended up actually being pretty serious, and she didn't do the best job of explaining what, exactly, the disease was... until I started bawling in her office, which then prompted her to basically give me a mini health lesson." This is not how it should've gone down. "I shouldn't have had to get emotional to receive information about what's going on with my own body," she says. "She should've been transparent from the beginning to assure me, as her patient, that she knew what she was doing and that I was in safe hands."

Assurance, and other tactics such as asking your patients for consent before performing a procedure, can go a long way in making the experience of going to the gynecologist better for a patient. Hart tells me that she has visited an LGBTQ health clinic called Callen-Lorde for eight years, which she loves. "When they come into the room, they're asking for consent," Hart says. "They're telling you every step of the way—before they put the speculum in, before they take samples from your cervix, they're walking you through it. So you know exactly what's happening to your body, as you should." It's not only going to make for a more informed patient, but it could ease fears or triggers.

Boebi echoes this proposition. "If there's any doctor that should keep consent, safety, and comfort as the first priority, it's gynecologists," she says. "I wish [they] would ask for consent and tell you exactly what they're doing throughout the entire process... I demand [consent] from them, but I wish I didn't have to." She notes that women are statistically likely to be raped or "experience some kind of contact sexual violence" in their lifetimes, which could make putting ourselves in the situation of having our bodies examined as they are in a gynecology exam triggering, or incredibly uncomfortable.

Stevenson hopes to see doctors get a bit less clinical in their dealing with patients, which could make us feel safer and less judged in a space where we're going to have to divulge our sexual history and open ourselves up on a table. "I prefer my doctors, [and] my gynecologist specifically, to remind me that they're people, too," she says. If our doctors were more down-to-earth, they may not make us feel like we're being judged—a feeling that has no place at any doctor's office.

"Especially in the case of an OB-GYN, when the experience is extremely intimate, women should feel important and like they have autonomy over their bodies, not like they're just another name in an appointment slot," adds Bryant. Women shouldn't need to place blind trust in their doctors, who we are giving intimate access to our bodies. "I think a lot of times doctors think it's our duty, almost, to trust them because they graduated med school and have fancy degrees hanging up in their offices," says Bryant, "but forming a relationship with a patient and making sure they feel comfortable and not condescended is important, also."

It also seems clear that, above everything, gynecologists need a new way of approaching and talking about sex. Every single person that I spoke to for this story had a bad experience with a gynecologist around the topic of sex or sexuality, which, though it doesn't mean that every single person will have a similar story, does make it seem as though they are more common than not. And they shouldn't be. "Gynecologists are dealing with our most intimate selves," says Stevenson. "It's an environment where we need to speak honestly and openly about our sex lives, as well as our genitals and reproductive system. That openness is crucial in order to get the best diagnosis or treatment."

And, as Hart reminds us: "They have to have a lot of care around how they're going to speak to us when we're literally going to be spread eagle on a table."