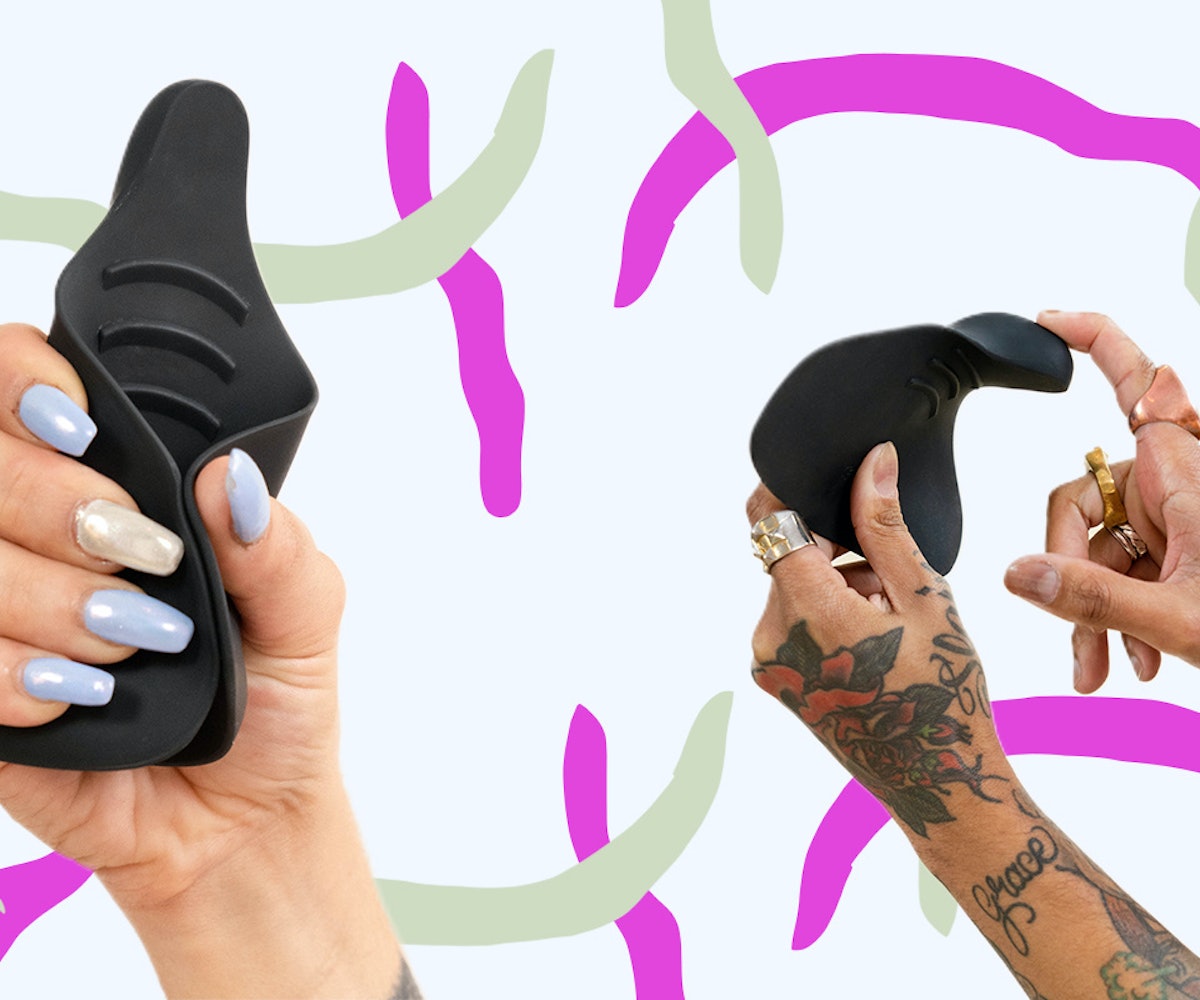 Wild Flower's first toy, the Enby, debuted last month, and as you can see in the photo above, it doesn't look anything like a toy that you've used before. It looks like the seat of a bicycle, or a Hershey's Kiss, or a shark fin, or a stingray—not a penis, or a massaging wand. This is perhaps one of the most intriguing things about the toy, seeing as its functions are not immediately recognizable. This ambiguity opens its users up to a much more exploratory experience, where they can figure out what feels best for them.

While a manual that comes with the toy suggests a few ways to use it, the possibilities are actually endless once the toy is in your hands. "As we've given it to more people, they have explored more ways [to use it]," notes Amy. "When we gave it to one person they just sat on it, and while their partner was on top of them, it stimulated their... prostate from their external side, so that was a way that we didn't really conceptualize, but totally could be used," they explain. "Another way that when you turn it on, turn the motor on, the wings that you can curl around, they actually flutter a little bit, they've actually used that way of stimulating too."

Though there are multitudes of possibilities, the Enby was created with a few uses in mind, which all came from gaps in the market that Amy and Nick saw their customers wanted filled. For one, the Enby can be placed on your bed and humped, which Nick says is "a really popular way for people with vulvas to get off," but which isn't represented in the market, likely "because it's not something you'd typically see represented in pop culture." It can also be slipped inside a harness, which he says are usually only "pleasurable to the person that's being penetrated, but not really comfortable or pleasurable for the wearer"—the Enby, though, makes it pleasurable for both people. And, the flaps of the toy are also bendable and can be wrapped around a penis, which can also be stimulated by the toy's grooves.

This multifunctionality also relieves any toy-related anxiety someone new to sex toys might have. Since there's no wrong way to use the Enby, it's totally fine to do whatever feels good. It can sometimes feel like a power imbalance when you're in bed with someone who knows how to use a toy you've never been introduced to or vice versa, and the Enby takes that potential imbalance away.

Personally, I felt like the Enby was a whole new experience. Since neither my girlfriend nor I knew how to use it when I first brought it home, it took some trial and error for each of us to figure out what worked best for us. It put us on equal footing and fostered an intimate sort of exploration that doesn't happen often with sex toys, and it was wholly refreshing. Amy agrees: "Especially if you've used a bunch of toys or you're in a longer-term relationship, it's something new and exciting that you're like, 'I don't know how to use this.'"

Instead of this type of hyper-management, Amy and Nick find power in giving their customers the final say in their own pleasure. It's the reason why the toy was made genderless. "When you make toys genderless, you give more possibility to who can use it," says Amy. "If you label something for a particular type of person, whether it be by gender or something else you're saying, 'Only you can use it.'" Hopefully, everyone else will take note.