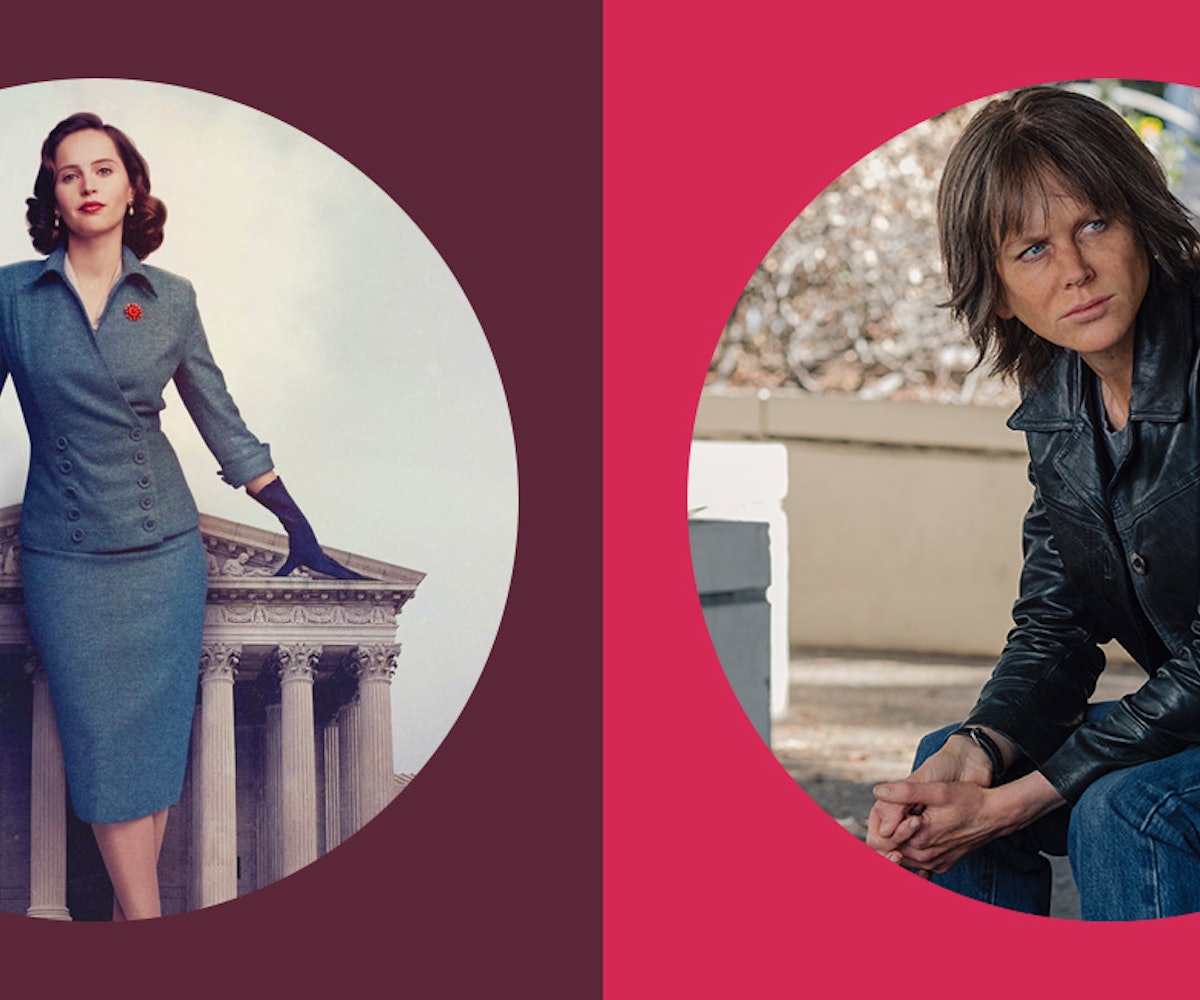 It's standard practice for movie studios to release some high-profile movies in a few cities on Christmas, to position them for year-end critical and/or awards consideration before, perhaps, going wider later in January. In some ways, two of this year's last-minute entries, Destroyer and On the Basis of Sex, resemble typical Oscar bait. But it's still relatively rare to see two such vehicles directed by and starring women, with Karyn Kusama directing Nicole Kidman in Destroyer and Mimi Leder directing Felicity Jones in On the Basis of Sex. The movies are otherwise disparate in pretty revealing ways; they'd make for a fascinatingly incongruous double feature.

On the Basis of Sex is so audience-friendly that it's surprising Focus hasn't opted for a faster wide release, and so Oscar-friendly it may have been packaged by Oscar prognosticators. Recent nominee Jones plays the beloved Ruth Bader Ginsburg in her younger years, tackling a crucial discrimination case in the '70s. The story isn't far off from the recent biopic trend of examining a smaller section of a notable life in order to shake out of tedious cradle-to-grave rhythms. Specifically, On the Basis of Sex resembles Marshall, the recent non-biopic that turned an early Thurgood Marshall case into an enjoyable (if slight) legal potboiler. But the movie can't quite commit to a narrower focus, and so spends an awkward first section providing background on Ginsburg's struggle to be taken seriously at Harvard (she's arbitrarily denied a Harvard law degree because of a transfer she needs to accommodate her husband) and inability to find a job practicing law after she graduates at the top of her class at Columbia.

After a time jump, Ginsburg takes her first major case on behalf of a single male caregiver denied a tax deduction reserved for women, or men caring for their wives. This keeps the movie from descending into all-out hagiography, but it still gilds the lily by imagining Ginsburg as Jones and her husband as Armie Hammer, an impossibly photogenic and glamorous pair. They give the movie a lot of charisma and zip that the filmmakers are a little too cautious to fully exploit. Jones, with a plucky and wavering Brooklyn accent, makes Ginsburg so immediately likable that the movie's frequent invocations of her stubbornness and exacting expectations feel a lot more theoretical than experienced. It's still novel to see someone like Hammer in the supportive spouse role, but hard not to imagine the Jones-Hammer banter a more inventive movie might have ginned up in between the uplift and mild sweetness.

That is not this movie. Leder made her bones as a DreamWorks go-to director, only to wind up in "movie jail" for Pay It Forward (a terrible movie that would hardly have slowed a male director's ascent a few months, never mind the better part of two decades). She's been prolific in TV since then, and On the Basis of Sex feels a bit like Leder picking up right where she left off, making a prestige biopic from 2003 or so. It's the kind of movie that, in the intervening years, has come to feel more like TV, with Leder's slick professionalism producing a highly watchable, thoroughly unsurprising version of respectability.

Destroyer could also have come out 15 years ago. It's a rough, downbeat crime thriller, and has the kind of transformational performance that Oscar voters have loved for ages, with Kidman made up to look positively zombie-like as a burnt-out Los Angeles cop haunted by an undercover mission that went very wrong many years earlier. This is a movie that protects a "difficult" lead character just as fiercely as the Ginsburg movie guards its lead's likability, and is arguably just as self-conscious about its own image, with grim seriousness in place of strenuous nobility.

But director, Kusama—consigned to movie jail for some years herself, almost as if this is a serial thing in Hollywood—knows her way around a genre exercise. She also knows how to complement Kidman's performance with her filmmaking. As Kidman's Erin Bell makes her way around town, tracking down a figure from her past who has resurfaced, the movie resembles a busted-ass private-eye story as much as a cop picture. Though she's technically a member of the police force, Bell works mostly alone, and Kusama often isolates Kidman's face in the frame. Her presence is ghostly, receiving phone messages instead of taking phone calls, emitting a croak of a voice as if possessed, and materializing at suspects' doors with some of the procedural elements intentionally elided.

Kusama manages the neat trick of keeping her storytelling clear enough to understand, but tricky enough to hold off on some crucial information; the real mystery (augmented by flashbacks where Kidman plays convincingly younger and far less ravaged) is what exactly went down to wreck Bell's life, even if you can probably take some broad guesses after 30 or 40 minutes. A lot about Destroyer's story, involving a too-deep undercover assignment and a botched bank job, is familiar material, but Kidman and Kusama work it like pros. Like Steve McQueen's recent Widows, it's a genre movie that finds suspense in smaller, character-based moments as often as the flashier stuff.

Both Destroyer and On the Basis of Sex find an emotional core in mother-daughter relationships, which in turn inform, even defend, the movies' own approaches to their representation. Ginsburg sometimes quarrels with her somewhat more radically minded daughter, both impressed and intimidated by a younger generation's greater access to, and more direct championing of, feminism. The movie seems to feel similarly: aware that more radical, anti-formulaic stories exist, but proud to carry the torch for movies where the heroine strides purposefully with her head held high. In Destroyer, meanwhile, Bell's semi-estranged daughter radiates contempt for her screwed-up mom, but can't quite manage to rebel by riding the straight and narrow. She just seeks out a different sort of self-destruction, unconcerned with breaking the cycle. Like the movie, she's not necessarily after respectability.

Favoring a tougher, unsparing movie like Destroyer over the more genteel, grandparent-friendly likes of On the Basis of Sex can be its own kind of cliché, coding "female empowerment" as women inhabiting dude-approved stories, spilling equal amounts of blood and sweat. To be sure, there's not necessarily something inherently wrong with the more traditional (and classically "likable") femininity of On the Basis of Sex; in this case, it just feels informed by outdated notions of what it takes to win the right kind of accolades. Destroyer has superficial awards trappings—again, that transformation, the likes of which helped Kidman win an Oscar for The Hours—but Kusama directs them with gives-no-fucks attention to craft. Despite an awards-friendly release date, the movie feels unburdened by the expectations of prestige, of serving as the right kind of example. Maybe with a few more years of progress, movies like On the Basis of Sex can enjoy the same luxury.

On the Basis of Sex and Destroyer are out in theaters now.