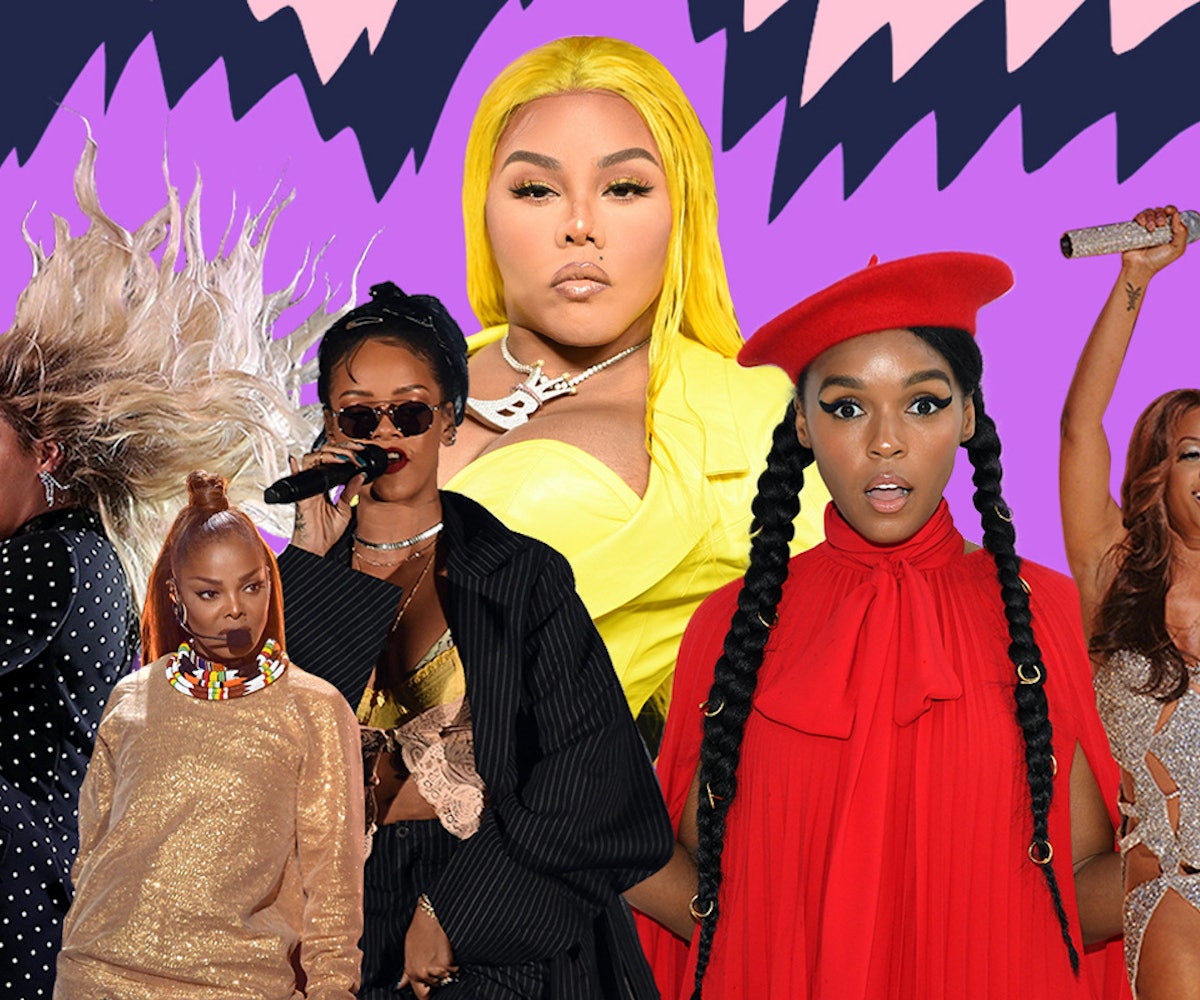 As our March Women and Power Issue comes to a close, I thought I'd send us out with a bang. And by bang, I mean a soundtrack. So, I reached out to a bunch of women and non-binary femmes to find out what empowerment anthems mean the most to them to make the ultimate in celebratory playlists.

These tracks will make you feel like a boss at work, a siren in the bedroom, and at peace with yourself. They cross genres and generations. In the same way that womanhood is not monolithic, neither are the songs that keep us going. These are the 50 bops—in no particular order—that will most help you feel yourself.

This song is the ultimate in giving women permission to unapologetically brag about themselves and their accomplishments.

If I had intro music for every time I walked into a room, this would be it. It's a hip-hop classic with a raunchy "girls can do it too" attitude.

The perfect reminder of how much power there is in female friendship. And while the video, below, is perfect as is, an update would be most welcome.

When girls interrupt traditionally male spaces, it's a total power move, and that's just what Danity Kane did with "Showstopper."

"[I listen to this because] when I'm having a rough season, I'm reminded that I've survived worse." —Nikki Tucker, brand strategist

Never let someone make you feel bad for being free or saying whatever you please.

"This is my ultimate 'time to hit the club' with my girls song." —Sojourner Elleby, radio host

"It may seem a bit cheesy now, but it's major that a Black woman created what's become a definitive queer anthem! This one makes me want to embrace my identity in every way possible." —Raquel Willis, executive editor, OUT Magazine

This is unifying rally cry for women of all races if there ever was one.

"Whitney is the originator of receipts on this one." —Audrey Williams, filmmaker and beauty editor, Bustle

"That 'What you saaaaaaaay?? She ain't no divaaaaaaaa!' is my call to action." —Channing Hargrove, fashion writer, Refinery29

"I was maybe 11 years old the first time I heard it, and it might've been the first time I heard a woman being in charge of her body and her sexuality. I don't think I thought it was possible. All the other hip-hop songs were about men being freaky and 'doing' sex to a woman. All the woman had to do was get swept off her feet and be in love. Or she had to be a hoe, poppin her coochie so that some dude can 'zuma zoom zoom zoom in her poom poom.' Either way, she had to fall in line with what a man wanted. 'Freak Like Me' was the first song demanding that these dudes fall in line because it's all about the dawg in me.'" —Gabby Sidibe, actress, Empire

It feels good to know that you don't need a man. It feels even better to tell him that he actually needs you.

"It always felt so defiant to me, a woman celebrating the fullness of her life with no apologies." —Yetide Badaki, actress, American Gods

"Whenever Janelle Monáe raps in a sickening, well-tailored suit, I feel like my actual pussy is a giving a monologue." —Amber J. Phillips, digital strategist

So many of my friends documented this song as their career woman awakening before they even knew what career they wanted.

I am a fiercely independent Capricorn with a Venus in Aquarius. I don't believe in compromising that for a relationship, and with this song, I have never felt more seen.

"It's about resilience." —Adrien Young, bassist for SASAMI

Before Beyoncé informed us that the "best revenge is your paper," she and the rest of Destiny's Child knew that living your best life was the remedy for haters.

"It reminds me to dream big and grand as hell." —Channing Hargrove, fashion writer, Refinery29

"As a boss, you know your money comes first, and you have no damn time for games." —Nana Agyemang, social media editor, The Cut

"That's such a powerful anthem. I remember my aunts playing it, and I would sing to it and loved it." —Amiyah Scott, actress, Star

This song, formatted as Trina giving an interview about how she became such a bad bitch, could subconsciously be how I ended up in entertainment journalism.

"I don't know if this qualifies as an empowerment anthem, but I always walk away from it with a reminder to know my worth. My eight-year-old self didn't really know what this song was about when it was first released, but the line 'don't be a hard rock when you really are a gem, babygirl' has stuck with me over 20 years later." —Taylor Bryant, senior editor, NYLON

There are very few songs/videos that speak more directly to Black women's existence.

"It demands respect for women who fall outside the traditional 'good woman' trope." —Jessica Robinson, doctoral candidate, University of Illinois

"It's one of the earliest songs I remember hearing as a kid and realizing what it meant to be a woman who didn't play by the rules. I still get a little chill and stand up a little straighter whenever I hear it." —Arianna Davis, editorial director, OprahMag.com

"This song is all about resilience. It's gotten me through a lot." —Ericka Hart, activist and educator

"I'd only heard this song once I had already moved out of the South, but I wish I'd had it when I was feeling the pain of being excluded... Though I never wanted to be a pageant girl and could never fit that mold, 'Pageant Material' is a swift kick-in-the-boots reminder that pageantry as a whole is pretty hollow... and if Musgraves isn't pageant material, I don't want to be." Bailey Calfee, staff writer, NYLON

35. "These Boots Are Made for Walkin'" - Nancy Sinatra

"I literally can't listen to this iconic song without feeling an instant boost to my confidence. The line 'You keep thinking that you'll never get burned/ hah!/ I just got me a brand new box of matches,' perfectly encapsulates the magic and power of an angry woman." —Greta Chiocchetti, editorial intern, NYLON

The word "anthem" can be a bit overused, but there is no other word to describe Kelis' 2006 track.

When you forget that you can do literally anything, listen to this.

"The lyrics are super-empowering for women. She literally says, 'Nobody dress can effeminate me.'" —Sheila Rashid, fashion designer

On most days, adulthood feels like a nonstop cycle of bills and responsibilities. This song reminds me to appreciate the fact that I've achieved the independence I once craved when I was still a kid.

40. "His Eye on The Sparrow" - The Mississippi Children's Choir

"I feel as though I'm born again. My resurrection." —Chastity Hicks, financial advisor

"It's such a confidence booster and really does make you feel like THAT BITCH." —Yung Baby Tate, rapper

You don't even need to hear the rest of the song to know that this is permanent mood.

"This song details the experience of being a trans woman and grappling with a shifting social place. As a young queer woman, this song provided me with solace in my sexuality when I needed it most." —Allison Foster, editorial intern, NYLON

"This song is a BOP. And It makes me feel like I can accomplish anything I put my fucking mind to. The combination of Queen B's luscious voice, the epic lyrics, and swift beat of the drums get me next level hyped."

Not sure about you, but being able to buy expensive things for me and my homegirls is a major financial goal.

Sometimes you have to put folks on notice that you're better than them because you've worked harder, done more, and treat people better.

This song is my only motivation to get dressed for work some days.

Every Black girl should know how to finish this line: "I got 32 flavors of that bootylicious bubblegum…"

He made a beautiful ode to women that reminds me of the love I have for myself, for my best friends, and the women I have in my family.

Listen to the full playlist (minus the two songs Beyoncé didn't put on Spotify), below.