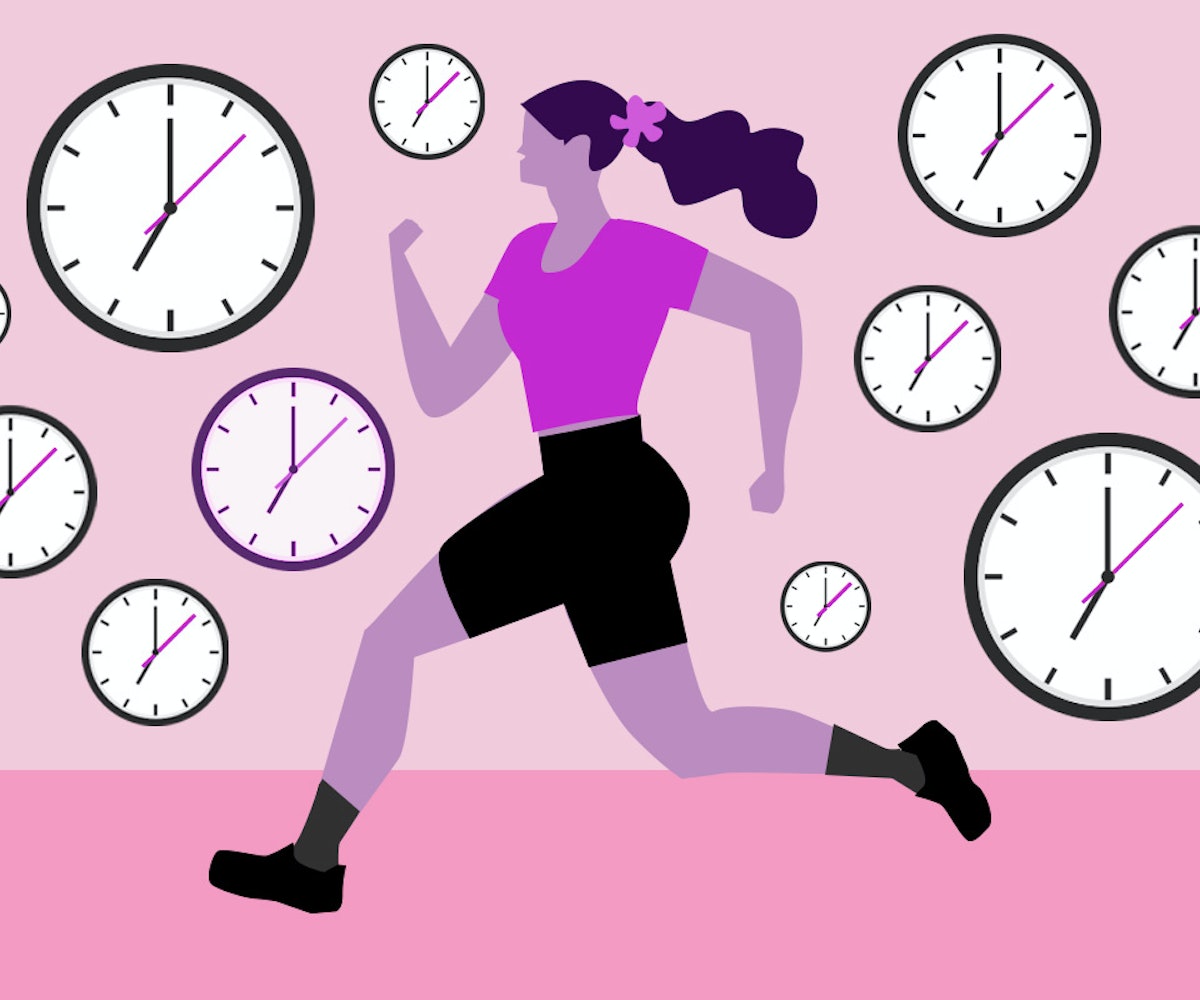 Recently I realized that I was creating pandemonium in my life: looking for problems in my relationships that weren't there, convincing myself that everyone was mad at me, going through cycles of not eating and then overeating and then feeling ill and not eating—really, I have a talent for conjuring disorder. When I talked to my therapist, I told her that I was aware that I was creating these issues on my own—and I was proud of myself for having that level of self-awareness—but still, I couldn't put my finger on why I was doing that. So, why was I experiencing so much discomfort in almost every aspect of my life? Her response was illuminating; she helped me understand that I was letting my chaotic work life leak into and spoil my regular life.

I'm a freelancer. Shocking, I know, that I would then have feelings of instability, because, like, chaos? Freelancing?? In this (gig) economy?! Um, yes. Basically, for those unfamiliar with what this particular set of work stresses entails, because I don't have to go into an office every day at a specific time, every day is different. And I have to admit, when I started freelancing full-time, that was actually part of what made it sound so alluring. But after doing this for a couple years, the instability has started to eat away at me. Some days, I wake up and have to say "yes" to a few projects with immediate deadlines, and work like a dog for 12 hours straight. Other days, I have absolutely nothing to do—and not in an "ahh," relaxing way—in an "oh shit, I'm not going to make rent this month" kind of way.

As a result of the constant uncertainty in my life, I don't have any real schedule—not with work, not with sleeping, not with eating, and not with exercise. I also don't have any boundaries set around my working hours, because if I really need the money, I will work until my mental health has been utterly depleted and I am crying in a fetal position on the floor (seriously, that happens, like, once every two weeks). So, when work creates turmoil in my life, it doesn't feel specific to my work, it just feels like general chaos. It's not fun.

My therapist said that having structure and routine would alleviate some of this. Most working adults naturally have this built into their lives if they don't work from home. However, I know that other adults who do go into an office every day also suffer from these kinds of issues; maybe they get home too late and don't have time for themselves to do things like exercise, or finish watching Season 3 of Stranger Things (please, someone release me from the prison of finishing Season 3 of Stranger Things).

If that sounds familiar, maybe you could also benefit from what my therapist and I determined I should do. We agreed that I should implement a single thing every morning that will make me feel like I have one consistent thing in my life. Apparently, having a consistent thing—something that's just for you, a space and time that nothing and nobody can permeate or take away—makes you feel like you have some control over the frenzy of everyday life.

Since I already run for exercise, my therapist suggested I do that every morning before I do anything else—no dilly-dallying, or picking things up around the house, or feeding the cat, or starting the day's laundry list. I could take Saturdays off but still needed to commit to doing it. "You will hate it," she said. "But you have to go."

So, in an effort to implement structure in my life, I tried running or walking every day for 10 days. Here's what happened for me when I did just that.

Day 1: It took me, like, 30 to 40 minutes to leave the house. I felt practically physically incapable of not dilly-dallying and doing my morning stuff before leaving the house. But, I went for a run. I felt really good after but was ultimately stressed that I was starting my day so late.

Day 4: I woke up and thought, I would gladly jump in front of a train instead of doing this. But I went.

Day 5: I genuinely forgot to go and didn't realize what I'd missed until midday.

Day 6: I went. I felt faint after jogging and so walked into Starbucks for some protein. I sat there for 30 minutes, eating and drinking and recuperating. Then, I was frustrated that I started my day so late after showering, changing, etc.

Day 7: I went for a hike, and I felt really good about myself, and the rest of my day was so productive. However, I'm starting to realize that I am incapable of getting out of the house without doing a million things beforehand. I also have to break down the idea that I can only leave the house if I can justify it by doing other things too. Like, on Day 7, I told myself I could drive to a hike, but only because it meant I could go next door to Trader Joe's for a protein smoothie afterward. On Day 6, I went to Starbucks too, tacking on to my time out of the house.

Day 8: Saturday, but I went for a hike with my girlfriend.

Day 9: I took my break Sunday, because I didn't on Saturday.

Here's what I concluded: If I'm going to do this, then this coming week, I need to actually implement structure, not just the illusion of structure. Like, I need to try waking up at 6:30am, getting out the door by 7am, and be showered, changed, and dilly-dallied by 8:30, because right now, this routine is bleeding into the rest of my day. It was actually more stressful some days because delaying my workday and pushing deadlines didn't make me feel good. I feel like, in this 10-day test run, I made so many bargains with myself, started so late, and complained so much that I actually somehow created more chaos in my daily routine. However, I have a feeling that sticking to an exact time every morning will alleviate all of these issues. So, right now, I feel hopeful—and hopeful-chaotic is better than helpless-chaotic.

NEXT UP
Life
19 Self-Care Gifts For Your Friend Who Needs To Relax
Astrology
11 Beautiful Tarot Decks To Gift Your Metaphysical Friend
Astrology
Your Natal Saturn Placement In Astrology, Explained
Astrology
Your December 2022 Horoscope Fuels The Reboot