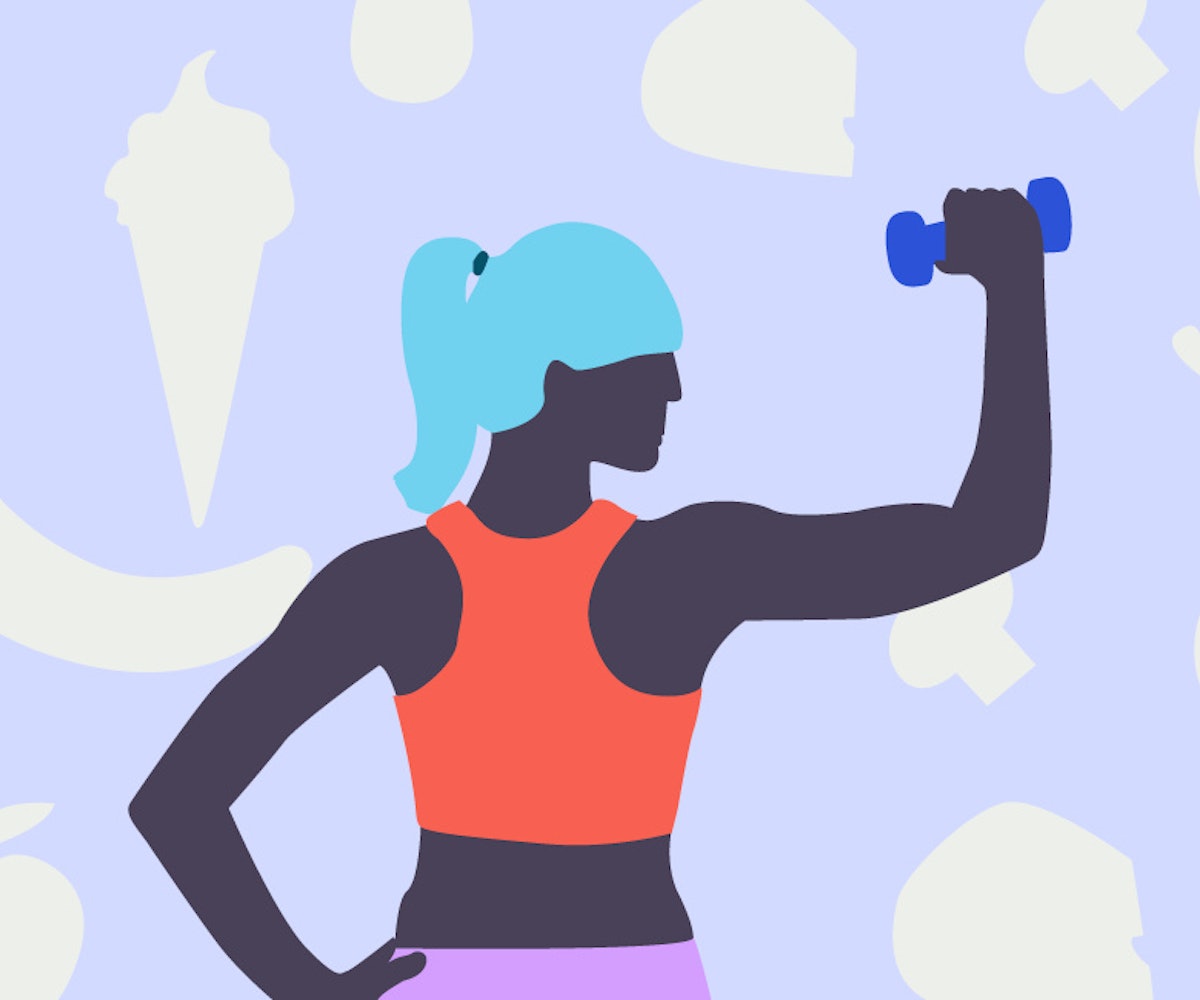 When I was in college and didn't really have much control over anything in my life, I placed an unhealthy amount of attention on my workout routine. I was insecure in my job and confused about my future, so I started working out every day, for hours on end; usually, I felt like I had to reach the three-hour mark to really feel accomplished. If I missed a day, I was even more hyperaware of the calories that I was putting in my body, and felt that I could see every slight fluctuation in my figure. I didn't realize it at the time, but, looking back, it's obvious that I was a compulsive exerciser, and likely dealing with an eating disorder on top of it.

While I've since reevaluated what I should be getting from a workout, and have worked with a therapist to take control of my problematic views of my own body, it's incredibly hard to get into working out in a healthy way when you've had any type of image disorder. This is because people who have dealt with eating disorders and those who suffer from compulsive exercising have dramatically different outlooks on working out than those with a healthy relationship with their bodies. "For people who have not struggled with an eating disorder or body image issue, exercise is something you do to feel good, to lose some weight in a healthy way, to feel strong, to feel confident, and to challenge yourself," notes Dani Tsukerman, the founder of Very Personal Training. But, she adds, for someone who has dealt with one of these disorders, "exercise becomes very tied to their self-worth, and isn't necessarily something that they do to feel good intrinsically."

Adds Dr. Ariela Vasserman, a licensed psychologist, "People who struggle with eating disorders in conjunction with excessive exercise tend to have much anxiety, anger and frustration, fear, and worry when their exercise routine is interrupted." Working out, Tsukerman says, isn't something that is done to feel healthy, but, rather, to "look good externally and to rid themselves of negative feelings, almost like an addict who can't function without drugs or alcohol."

And, in fact, even when people in recovery have regained a stronger sense of control over your eating disorder, it can still be difficult to get back into the workout groove in a positive way. For compulsive exercisers, Tsukerman says, "Your obsessive brain tells you that it's a great idea and that this is finally going to be the way that you feel great about yourself, and you may even outline in your head how it's going to happen, and be motivated and excited about the idea of it happening. It can make you feel euphoric and energized, because you feel 'in control.'" But that sense of control doesn't last forever, she says, and after a while "the sense of control [can backfire] and start controlling you."

Claire Mysko, the CEO of the National Eating Disorders Association, also notes that "the content around working out can be more damaging than the workout itself," pointing out that "far too many accounts share 'thinspiration,' and, more recently, 'fitspiration," which "promote unhealthy behaviors and unrealistic body standards." Tsukerman notes that this type of mindset makes its way into many gyms: "There are so many negative messages that are subliminally being sold, and they do it in a way that you think is 'normal,'" she says, and notes that it's common to hear the phrases "bikini body season," "six-pack abs," or even "strong is the new sexy" being tossed around casually.

For those who struggle with an eating disorder, having a negative view of their bodies can inhibit their ability to get back into working out. The weight of others' opinions added to their own view of their bodies can make working out in front of others near impossible. Says Tsukerman, "They might have feelings of shame or anxiety about working out in front of others, or may feel like they look stupid and that others are judging them or that they don't look as good as others in the gym, so they don't want to be in that kind of environment." All of these potential sources of insecurity, shame, discomfort, or triggering thoughts make the process of finding the right way to begin a healthy workout regimen incredibly rocky. It is possible, though, but takes an incredible amount of self-care.

Everyone I spoke with agrees that it's vital that you begin the process with a trained professional, and continue to use their expertise as a resource while you continue your journey. First off, if you're interested in beginning the process of learning to work out in a healthy way, Mysko says that it's best to discuss it with your therapist to "develop a plan," and then "check in that the exercise you're doing is being incorporated in a way that is helping you further your recovery." Tsukerman urges those able to seek out a trainer who is knowledgable and understanding of eating disorders, compulsive exercising, and body image issues and how they impact one's view of themselves. Someone with this training "will help you set realistic goals, to begin with, and they will help you reframe how you think about exercise in a positive way." Vasserman echoes these claims, noting that, "with the help of trained professionals, individuals may start slowly and gradually begin to develop a healthier relationship with exercise."

There are many things to avoid when stepping into the gym when you're dealing with a disorder. "A major thing to avoid is the scale and body measurements," says Tsukerman. "Because so many people base their self-worth or their success on the scale, it can be extremely triggering." Self-awareness is extremely necessary, as well; she says, "Know your triggers and patterns, and devise a plan for when you're faced with those triggers." Vasserman says that understanding how you can use exercise as a way of "challenging some of the dysfunctional associations and preoccupations with weight loss and body image" can make your mindset toward your workout more positive, overall.

And, too, keep in mind what is motivating you to work out and make sure that you're doing it for the right reasons. Says Tsukerman, "If you are doing it because you feel guilty for something you ate last night, or because you know you'll feel guilty if you don't work out, then challenge that and don't work out right then. Sit with those feelings and let them pass and you'll see that you survived and nothing bad happened." This will be hard, and it won't immediately change your outlook, but, "with more and more practice, you will find a balance."

"It is important to have an individualized exercise reintegration program for those who suffer from excessive exercising and other eating disordered behaviors," says Vasserman, but, for those who do not have access to mental health professionals, there are options. When it comes to the type of exercises that serve you best, Tsukerman says the best are those that "bring awareness to your body and require you to be slow and methodical or intentional" with your movements. "With each movement make sure you are tapping into each body part as it moves, and take note of how it feels," she says. "It's okay to take this slow." Vasserman also suggests "lower intensity, anaerobic exercises in conjunction with mindfulness practices" for those just starting to get into working out again.

Tsukerman notes that those who have struggled with disorders likely have an obsessive outlook on exercising, and says that you need to try to actively work against that. "Try not to count the number of repetitions and allow yourself to stop an exercise when you feel you need to," she says. Tsukerman also gets that it's typical to "find yourself wanting to quicken the pace or get your heart pounding," but it's vital that you come to understand that exercising is about "waking up your body and mind" more so than it is about burning calories. And don't get too in-your-head about it: "Keeping exercising fun and enjoyable is important when reintegrating exercise in a healthier way," says Vasserman.

Everyone agrees that the most important things to focus on are that you're not becoming triggered by your workout and that you're continuing to work out for the right reasons. Working out should allow you to feel better about yourself, not worse.

NEXT UP
Astrology
February 2023’s Full Snow Moon in Leo Embraces The Real You
Astrology
How to Use Astrology to Access Past Lives
Astrology
Your February 2023 Horoscope Is A Breath Of Fresh Air
Culture
An Ode To Stripperweb, The Beloved Sex Worker Forum
Style + Culture, delivered straight to your inbox.