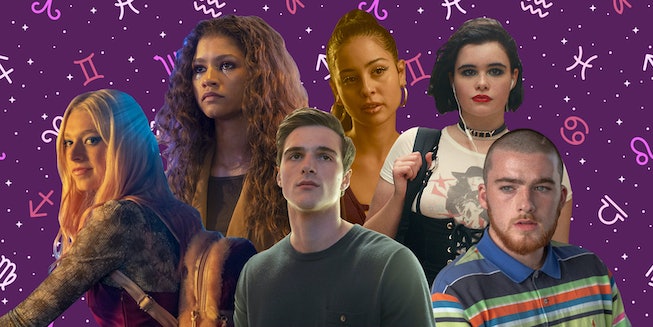 When thinking about the astrological signs of the characters of Euphoria, I ran into a conundrum. I wanted, as most of us astrology writers do, to give my readers each at least one character to empathize with via a shared star sign, to understand the character with their sign as they would understand themselves—even if it meant not their best selves.

Astrology can serve us as a tool of compassion, and so, it appears, can storytelling. That is why, when a story is good, when the characters are fleshed-out and well-considered (if not out-loud, then at least in the process of their making), we aren't able to cast stones at the characters we despise. In fact, the best stories are the ones where the villain glimmers with the possibility of grace or something like redemption.

In Euphoria, the villains are mostly men. Or, the men are at most villainous and at least ethically compromised. Consequently, the men of the show exemplify some of the worst behaviors of the signs they are matched with. The girls and women that make up Euphoria's landscape are not angels, but they are each other's witnesses and protectors, and caregivers. The signs they are matched with reflect the way they respond to their environments and how they embody their emotional turbulence in the context they are given.

Cal, like his son Nate, is a fire sign, but Cal, unlike Nate, is in a private downward spiral no one else can see. While leonine Nate lashes out, Cal shuts down. But, as we all know, shutting down for an Aries does not mean turning down the flame. In fact, Cal seems incapable of putting out fires or keeping a secret. Private but impulsive, Cal makes bad choice after bad choice because his sexual shame compels him. He is, like most Aries, bad at following rules and a servant to his desires, even if it means burning down his whole life. To break the pattern of pain, he would have to come clean, but coming clean means coming out, not just about who he is but who he's harmed. See how long it takes an Aries to admit they've done wrong.

Lexi, like all Taurus youths, just wants her friends to get their shit together. She appears to have a very keen sense of right and wrong and is ready to scold you about your bad life choices. The fact that she spends most of her time with people who appear to have a lot more trouble making good choices is also true Taurean behavior. A Taurus relishes the chance to come off strong and reliable. Lexi's judgment and disapproval don't mean she's willing to ever give up on you, which is why Rue knows she can always reach out to Lexi for help. Self-possessed, Lexi doesn't appear to give a shit what her peers think about her and will dress up as Bob Ross for Halloween because she's more interested in amusing herself than being sexy for you.

Cassie is tricky to define. She shapeshifts gently from episode to episode, and that's what makes her our Gemini. Cassie comes off superficial at first, and perhaps she is. All initial interaction begins on the surface, and no one knows that better than a Gemini. Geminis recognize the power of fashion and are easily charmed by what they perceive to be intelligence and wit. Cassie is incredibly proud of her niche Alabama Worley costume, crestfallen when McKay doesn't admire it, and tempted by the young man who recognizes her creative attempt. She is, all things considered, a pretty good communicator, but more sensitive than she lets on. She confronts McKay directly about most conflicts, even if she processes her feelings on her own. Plus, Cassie, like all Geminis, has secret talents—and isn't ice skating the most air sign, competitive thing you can imagine?

Rue's mom fits the bill for a Cancer mom who is too overwhelmed to take on the work of showing up for her daughters. Cancers are known for being the moms of the Zodiac, but Cancers in trouble tend to shut up shop and go inward, something that can be very understandable when one has suffered a great loss like that of a husband, and something that a mother of two can hardly afford to do. Leslie, like many Cancers, tries to evoke emotional understanding in Rue, she reaches out through sentiment and memory. Leslie wants to believe in the healing power of her love, and she gives her daughters a great deal of space in the hopes that her trust will inspire their honesty.

Magnetic, Nate stars in the world rather than lives in it. His Leo pride is his weakness and, when bruised, it turns into self-aggrandized violence. His pride suffers most in relation to his family, the reputation of which he seeks to protect at all costs—another very Leo concern. There is a yearning for love (Leo's big heart) and a possessiveness inside him, which he knows how to weaponize against the women who are drawn to it. Remember the scene when he compliments Rue about her appearance while simultaneously pushing the exact right button to make her doubt her self-worth and relationships? Yep.

McKay, at his Virgo best, is driven and gentle. His perfectionism is not only personal, it's an inheritance that is both familial and cultural. This show does a great job of underscoring the kind of pressure put on a young Black man to stand out and rise above his peers, the adage of "working twice as hard" is certainly applied. But, McKay's Virgo perfectionism is also his hyper-criticism. And, while it serves him well up to a certain point, it ultimately results in a young man who is dissatisfied with where he is and who he is. This hypercriticism leaks out toward Cassie often, about her appearance and about her past. Rather than relate to her, he tries to fix her and her reputation. Rather than reach out to her when he is harmed, he uses her to fix himself.

Maddy knows that all stories have two sides, she knows that there's something called justice, and it doesn't always look the way people want it to. It would be easy to look at a character like Maddy and assume she has the wrong idea about love and how it's supposed to feel. But Maddy, our Libra, knows that Real Love is a story everyone buys and if she's buying it, then she's all in—even if "all in" means in over her head. When she's mad, she'll fight but just to prove a point, but she'll compromise and go Nate's way if Nate just admits she's right. In true Libra fashion, Maddy has a contingency plan that involves information, lots of it, because Maddy has a folder of information she's saving for a rainy day. And, in true Libra fashion, Maddy can't help but let a little bit of gossip slip from time to time.

Fez, like all Scorpios, knows too much and cares more than he lets on. And, like most Scorpios, Fez carries a moral compass few could truly understand. As the town's primary drug distributor and general illegal activity consult, Fez is privy to everyone's best-kept secrets, from Rue's relapses to Kat's bitcoin stream. He is also his grandmother's primary caregiver, a fact that adds a layer of devotion and sacrifice all Scorpios need to exist. This layer is thickened when we witness him refuse to sell to Rue and when we watch him take on Nate at his own risk. Even the scene when he robs a man and is forced to react violently when the man doesn't comply. A Scorpio, Fez, would rather use psychological violence to get what he needs.

Rue could be a lot of things. Perhaps that's why a Sagittarius is her most likely correlation. Sagittarians are ruled by Jupiter and, according to some, Neptune. The god of expansion, of luck and gambling, and the god of dreams, escapism, and altered states of consciousness. Rue exemplifies these Sagittarian aspects. Aesthetically, like most Sags, Rue can make even schlubby attire look cute because of her rascally charm. She moves through her world like she's got one foot out of it, because she's not sure she belongs there—though, she's not sure where she belongs at all. She is a secret romantic like all Sagittarians are, holding out for the one true thing which arrives in the form of Jules. Rue gambles with her own life, and she's lucky enough to live through it time and time again. At her most fired up, she is full of Sagittarian facts, quips, and philosophical considerations. At her most troubled, she is full of emotions she doesn't know how to express and a deep drive to go where none of those emotions can follow her.

In true Capricorn fashion, Kat is the one character on the show that has somehow managed to make bank off the very thing that has caused her emotional turmoil: her body. Like all good Capricorns, Kat recognizes that there's money to be made from any circumstance, whether that circumstance is her reliance on the internet for social validation or her propensity to notice men's weaknesses. Kat's come up is a revelation on this show, and her erotic empowerment is thrilling when it's not troubled by her fear of vulnerability and, well, being herself. In true Cap fashion, Kat uses biting sarcasm and high standards to keep those who like her at a distance. Her Capricorn arc is very much about trusting herself to access her desires and admit that while her internet self is powerful, her private self deserves softness and care.

Perhaps Jules being an Aquarius might be too on the nose. After all, the idea of a stranger, a girl from a different world, placed into a town where she doesn't belong reads like a YA novel called "Teen Aquarius." Well, maybe Jules is living in a YA novel called "Teen Aquarius" while simultaneously living in this story. In this story, she is a radiant being made partially of glitter and partially of pastel gauze. In this story, like wind carrying water, Jules carries the emotional turbulence of the other characters. From a distance, it can appear as if they are also a part of her story, Nate's anger, Cal's shame and violence, Rue's love. In a way, they are because they impact and affect her. Jules is not, after all, without her humanity, despite often being oblivious about the emotions of others (Rue). It's just that her story is much wider than the story of this one town. In true Aquarian form, Jules innately belongs to no one and regularly disappears to a place where those who love her most can't follow.

Gia, Rue's sister, shows all signs of being a Pisces. She's the only one in the family that seems to "understand" Rue, but understanding Rue doesn't mean making better choices. In fact, Gia's understanding might have a lot to do with her own propensity for escapism (since Pisces is ruled by Neptune/ Jupiter as well). Like a true Pisces who's just beginning to reckon with her own emotional difficulties, Gia is often tempted to scrape Rue up off the floor and then lie down on it herself. We don't spend a lot of screen time with Gia, and while Gia isn't exactly hitting the hard stuff yet, Rue does spend an awful lot of episodes tracking her seemingly innocent sister down and scaring bad suitors off.