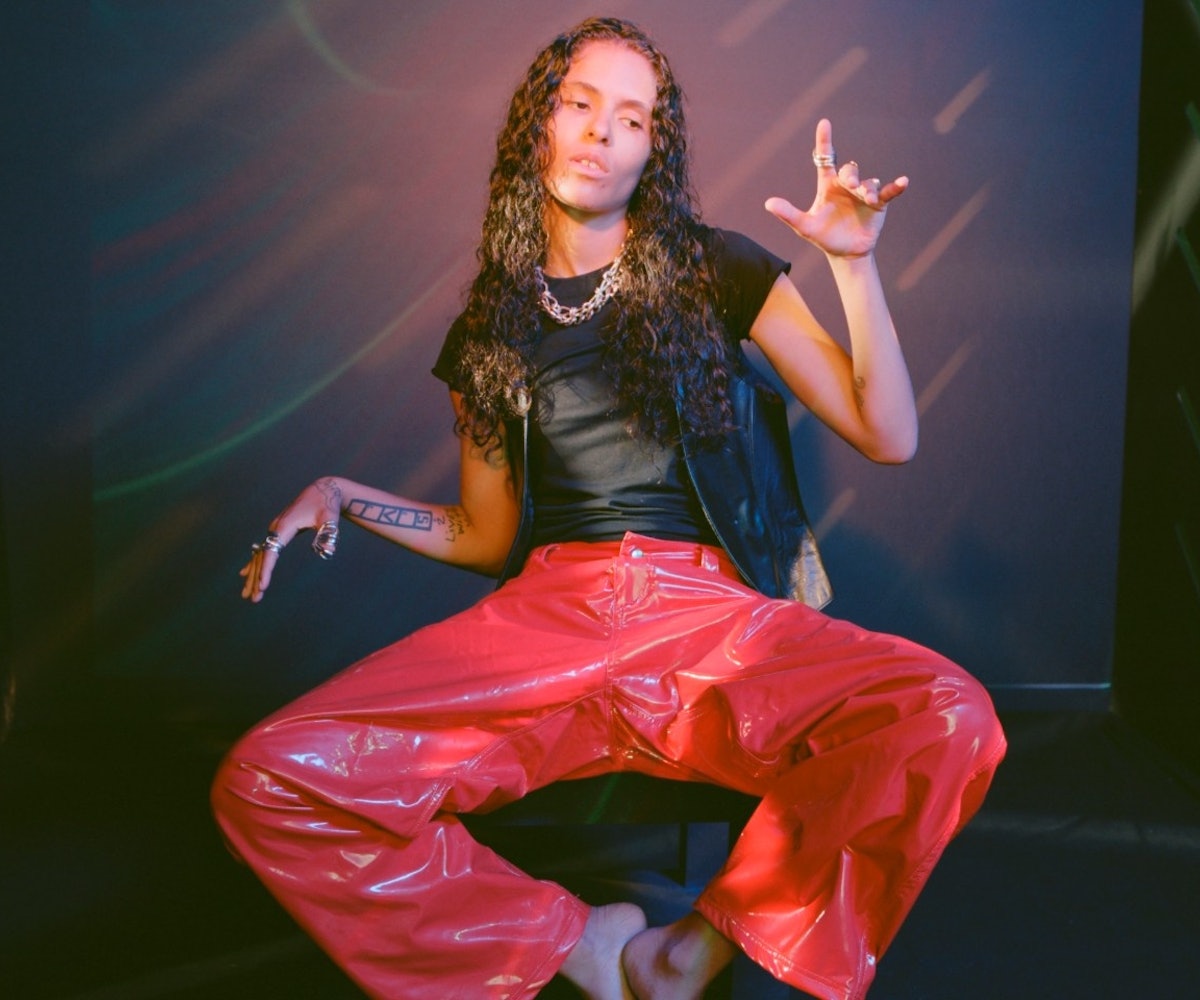 The golden era of the Soundcloud rapper has passed, but 070 Shake will not be lost with it. The New Jersey-bred hip-hop artist Danielle Balbuena — who initially sparked buzz with her early solo experimental trap-hop tracks and collaborations with her namesake 070 collective — was introduced to the masses when she nabbed back-to-back features on Kanye West's ye and Pusha-T's Daytona in 2018 with a steady, synthesized alto and well-harnessed poeticism that made people lean in with curiosity.

Now, five years later, Shake arrives with her debut solo album, Modus Vivendi, a genre-defying yet cohesive project that serves as a compelling introduction to the young artist's expansive range of influence. Over its 44 minutes and 14 tracks, she samples Debussy and Ben E. King and effortlessly weaves references to Pink Floyd and Shaggy with tribal drums and orchestral arrangements. On "Guilty Conscience" she's a radio-ready mumblecore star as Myles William's retro-tinged production sends Shake pleading in an '80s pop ballad. Mid-album cuts, "Rocketship" to "The Pines," find Shake forging a cyberpunk soundscape, ricocheting between dizzying, twisted string arrangements and distorted walls of sound. She's apt to score a brooding indie film, and over a January phone call, Shake, in fact, admits that that's something she'd really like to do.

The title, which she pulled from Matthew Leatherwood's book Raising the Curtain, means "way of life" in Latin. "It's an agreement allowing conflicting parties to coexist… a peace treaty," Shake says. "It's something that I definitely live by; allowing people to be themselves and not conflicting with it, but appreciating everyone's perspective, 'cause we're all storytellers."

Shake says the record, which was first announced back in June 2019, ultimately came together "at once" when Shake and co. locked themselves inside No Name Studios in North Hollywood around this time last year and got to work. Her creative relationship with producer Dave Hamelin tremendously bolstered her genre exploration; "He's not afraid to get weird," Shake says. "He will really show me the weirdest shit ever in my life, and either I like it or I don't. But he's not afraid to go there." Unable to resist from tinkering with the songs, Shake finally had to stop when, she says, "my manager said we can't add no more songs… I'm usually such a perfectionist, but now I'm becoming less of that and allowing myself to f*ck up."

Modus Vivendi's visceral sonic exploration suggests a greater potential waiting to be tapped. During our conversation, Shake details the sounds on this project she's excited to continue pursuing and dissecting. As she reveals below, some of the best elements of the project — namely, the sparkling, intergalactic ambiance on the front-half of the record, as well as her happenstance meeting with the "Guilty Conscience" producer — came unintentionally. And there's no telling what musical path Shake could embark on next.

070 Shake: "I really like movies, so [when] I make music I'm always visualizing something. It's more like I see the music, not just listen to it or make it. It's like I'm scoring my own movie that I've directed in my mind. [The album's intergalactic sound] wasn't intentional at all. We were just on acid [laughs]. But, I'm universal, I don't just stay on Earth when I make music. I try to go outside of where I am. It allows me to tap into different things. My music is really about where I am in the moment in my mind. It creates itself by the mode I'm in. For me, it's more authentic to allow myself to create naturally instead of picking a topic and tackling that.

I love the sound of a slide guitar. That was a big part of the album for me. Honestly [Pink Floyd's] The Dark Side of the Moon had a big impact on this album. I had heard it for the first time while I was making this album. One thing that really stuck out to me was the slide guitar in the intro, and so if you listen to the intro on Modus it starts with a slide guitar.

I met that producer for "Guilty Conscience" through my neighborhood drug dealer. I went to go get some weed and he lives right in front of the producer. He was like, Yo, you gotta meet this guy. He has Grammys on his wall; he's a producer. Imma walk you to his house, he lives right in front of me. I knocked on [Myles Wiliams'] door and we got in the studio, and that was the first song we made. We sat down and I wanted to write a story. The first thing I thought of when I was making that song was Shaggy's "It Wasn't Me." I kind of tried to make my own version of that.

I like doing things that seem like they mean something but they really don't, just to allow people to create their own ideas of what it does mean. [For "Flight 319"] I picked those numbers because I do like the numbers 3 and 9. 3-3-3 is nine; it's the numerology of it. Nine is my life path number so I like the idea of ending the album with the number nine."