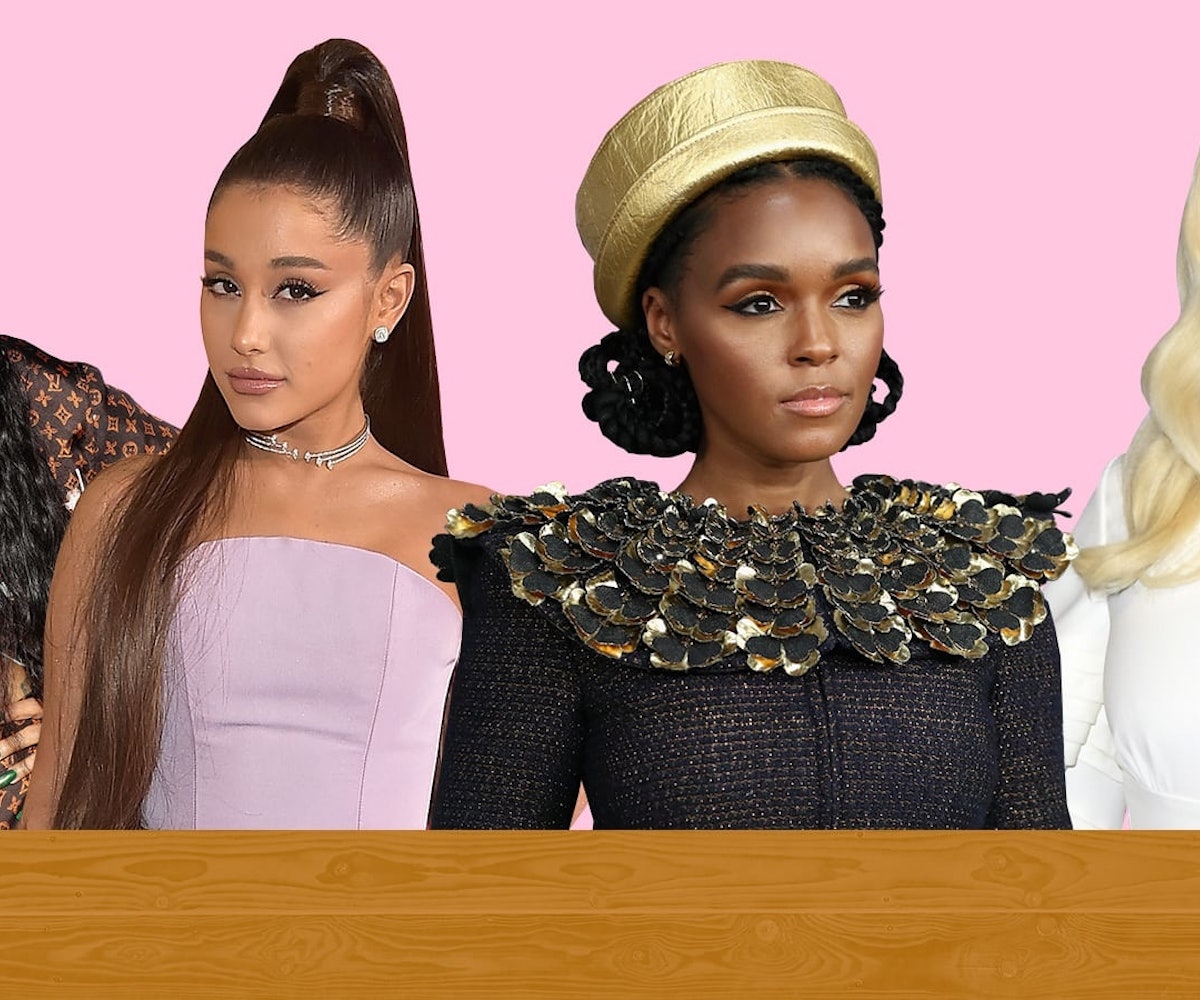 Music journalists are already off to the races, trying to give the most spot-on predictions about who will take home Grammy Awards at this Sunday's event. Critics are paying particularly close attention to the nominated women, making sure that they are being fairly recognized for their work. I, too, am interested in all of the above. However, what really has my attention is where these female musicians will sit.

Just like a high school cafeteria, there is a hierarchy to where certain butts are allowed to take refuge. Instead of trying to accurately name the winners and losers, I'd rather try to solve the more complex riddle of where, approximately, some of the biggest female nominees at this year's event might be seated. I'm taking a very (not at all) scientific look at this year's female nominees in the four general categories (plus a few honorable mentions), where they've sat before at the awards, and their general station in the pop culture Zeitgeist to make my predictions.

My general breakdown of the Grammy seat real estate market goes like this: The first row is obviously reserved for upper echelon entertainers and recipients of special awards and tributes. Sometimes this exclusivity is also extended to the aisle seats on the second row, which give viewers the same amount of visual access. There is a lot of star power in the second and third rows as well, but not as much respect. The fourth and fifth rows are shows of good faith for all the artists placed there. We see you. We know that one day you'll be second- and third-row material, but not yet. The exception to this rule are the aisle seats. Aisle seats are always coveted spots because they are more easily accessed by cameras and offer an easy route to the stage should a nominee win. Anything beyond row five is a toss-up.

Now that you're armed with information, get into our all-girl Grammy seating chart outlook.

Where she last sat: At last year's event, Cardi sat in the fourth row. It was her first-ever Grammy Awards, "Bodak Yellow" got her two nominations, and she gave an explosive performance of "Finesse" with Bruno Mars. Next to her were the Migos, including Offset.

Where she'll probably sit: With five nominations, a scheduled performance, and conflicting reports about her and Offset's relationship status, I think we'll likely see Cardi move on up. I think she's earned a spot in the front row, but an aisle seat in the second row would suffice.

Nominations:Record Of The Year - "Shallow"

Song of the Year - "Shallow"

Best Pop Solo Performance - "Joanne (Where Do You Think You're Goin'?)"

Where she last sat: Lady Gaga attended her first Grammy Awards in 2008 when "Just Dance" was nominated for Best Dance Performance. Since then she has raked in 23 more nominations, six wins, and six performances at the show. Let's just say she ain't new to this, she true to this. Last year she sat front row… next to Elton fucking John.

Where she'll probably sit: This year she's hoping to reap the benefits of her amazing vocal delivery in A Star Is Born, and I'm sure she'll be right in the front, where she belongs.

Where she last sat: In the front row, serving snacks to Blue Ivy.

Where she'll probably sit: The Grammys will be lucky if they ever see Beyoncé again. I highly doubt she'll even show up. But if she does, it's pretty obvious where she'll be.

Where she last sat: Front row. Kanye wasn't there.

Where she'll probably sit: Without nominations in any of the general categories, I wouldn't count on Swift's attendance. But she'll still be in the front, or in one of those cozy aisle seats in the second row if she does.

Where she last sat: Last year she sat in the second row next to John Legend and Chrissy Teigen (and delivered an amazing speech about Time's Up, just saying.)

Where she'll probably sit: Monáe has a total of eight Grammy nominations and a history with them that began in 2008, she deserves some respect on her name. I think she'll be back in the second row.

Where she last sat: Third row on the aisle at last year's event which was before her very public engagement, but after "God Is a Woman."

Where she'll probably sit: Nowhere, probably, because it's rumored she won't be attending at all.

Where she last sat: During 2016's 58th annual event, she looked to be at least a handful of rows back being nominated for Best Country Album.

Where she'll probably sit: Musgraves is positioned to be a huge crossover success, so I think we can expect to see her in row three, probably close to an aisle, this year.

Where she last sat: Despite this being her first year as a nominee, Rexha joined Kesha, Cyndi Lauper, Andra Day, Camila Cabello, and Julia Michaels on stage last year for a performance of Kesha's "Praying."

Where she last sat: No clue. She was mysteriously incognito in the audience at the 2018 ceremony, even though she was part of the "Praying" group performance.

Where she'll probably sit: Cabello didn't get a general category acknowledgment, much to the surprise of fans. But that doesn't mean they won't stan less hard for her, and the Grammys know that. She's definitely a third-row contender.

Record Of The Year - "All The Stars"

Song Of The Year - "All The Stars"

Best Song Written For Visual Media - "All The Stars"

Where she last sat: SZA appeared in the fifth row at last year's event despite snagging five nominations, including Best New Artist, at her first show. This was likely to stay close to her wheelchair-bound guest of honor: her grandmother.

Where she'll probably sit: This year she's featured on the soundtrack for one of the biggest movies of 2018, Black Panther. While the movie itself was a big deal, that isn't a category that gets much love. I think we could still only catch her in rows four or five.

Record Of The Year - "The Middle"

Where she last sat: I'm not sure where she sat at last year's event, and that's probably because she performed twice during the evening.

Where she'll probably sit: Similar to Musgraves' crossover appeal, I think Morris' five nominations this year will also have her in the first four rows.

Where she'll probably sit: In row five, where we won't be able to see what I'm sure will be a stunning outfit.

Where she'll probably sit: Despite her nods in two coveted big four categories, H.E.R. is still a rookie; I'm willing to bet she'll be in the fifth row.

Where she'll probably sit: Unfortunately, an inescapable viral song is not the key to a good seat at the Grammys, even if it does get you a Song of the Year nod. She'll be lucky if she ends up in the fifth row.

Where they last sat: N/A

Where they'll probably sit: If we can't count on the Grammys to put some respect on Beyoncé's gift to the world (Lemonade), I don't anticipate them giving her protegées prime seating real estate. I think they'll be beyond row five. I'm not happy about it.

Record Of The Year - "The Joke"

Best Americana Album - By The Way, I Forgive You

Where she last sat: No clue, Americana isn't one of the more popular genres and, as such, these nominees are often shoved in rows further back without much camera time. But I know she was in attendance at the 2015 event when her album, The Firewatcher's Daughter, was nominated for Best Americana Album, a category they don't even broadcast.

Where she'll probably sit: Probably an aisle seat in a row beyond five.

NEXT UP
Entertainment
Relive ‘00s New York With Yeah Yeah Yeahs, The Strokes In ‘Meet Me In The Bathroom’ Trailer
Entertainment
TSHA On 'Capricorn Sun' & Searching For Euphoria
Entertainment
Seulgi Finds Her Own Lane With '28 Reasons'
Entertainment
Aya Nakamura On Preparing Her Fortnite Soundwave Series Performance