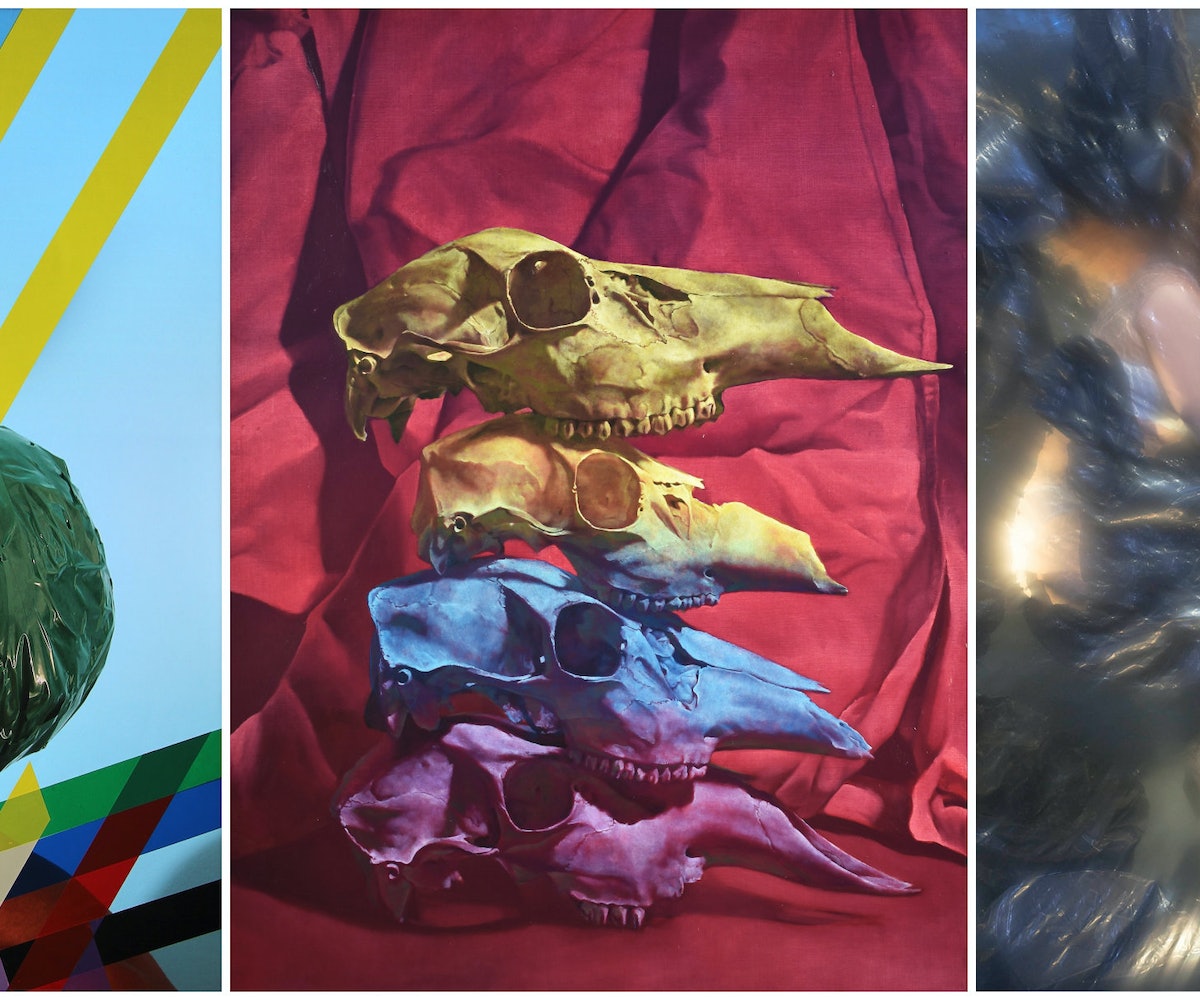 I love art, but I don't have the money to adorn my (tiny) apartment's walls with the kind of work that I love and that I feel represents me. Usually, when I go to galleries or fairs, I don't even think about the fact that the pieces are for sale—because to me—someone who doesn't have enough disposable income to drop tens of thousands on a piece of art—they're really not for sale. And, when it comes to artists and work exhibited, I often don't feel adequately represented on gallery walls; queer artists, female artists, and artists of color aren't traditionally given enough opportunities to show their perspectives through art.

Ahead of their showcase in Miami, I spoke on the phone with the founders of Superfine! The Fair, Alex Mitow and James Miille, who saw similar problems within the industry. A curator and a photographer, the couple, who are business and romantic partners, saw the issues both on a personal level, like me, feeling underrepresented by the work they were seeing; and on a professional level, as people trying to make it in what they felt to be an unwelcome space. They noticed gaps, not only in what was available to consumers but in the options that were given to aspiring artists. "We saw a collector base that wasn't really welcome in the art world," Mitow says, "and also artists and galleries who weren't able to make sales."

From those observations spawned the idea of a more universally accessible fair. "Our overall goal is to create an art fair that's more accessible for a larger base of people," James tells me. They show a diverse group of artists at every fair—queer artists, artists of color, and female artists are shown on a much higher level than straight cisgender white male artists. Which, bless. And not only that, but the work is also given a fair and accessible price point, with prices starting at $100 and capping off at $15,000 (although most pieces are priced between $600 and $5,000). While it's still a pretty sizable investment to purchase art at the higher end of that scale, it's still much more affordable than other fairs and galleries, and the lower end of the scale can be reached by most.

The fair selects artists to show based on merit, meaning there are no under-the-table deals between artists and directors. They were quick to tell me that something less honest happens in many galleries and fairs, and this can be pointed to when trying to understand why so many shows are overrun with white male artists. This cycle is perpetuated by the people who are in control of who is shown at galleries (read: straight white men) giving artists with similar backgrounds (read: more straight white men) the ability to show. Queer, female, and black and brown voices get left out.

By not showcasing different viewpoints and by not giving minorities the platforms to share their art with a larger audience, we are in effect saying that our society doesn't want or need to hear those voices, or that people like them won't show up and support the art. A straight, white, male gaze is then established as the norm in the art world, when this is the exact platform to try to understand others' ways of seeing.

Mitow says that this falls on gallery owners as well as art collectors to fix. "I think, assuming that one person or one group of people's not gonna react is really a bad decision, because you're not giving them the opportunity to support something," he says. "We're able to invite everybody to the table and present these narratives and then ultimately the goal is for these artists and these galleries to meet people who want to support them by purchasing the art."

And what people buy is also important. What you see every day informs how you see the world, so having a piece of art in your home that offers something unique can enhance your ability to see the world in a multitude of ways. "As a collector," Mitow continues, "I think it's your responsibility to not just buy what looks pretty above the couch but to think, What other person's perspective can I have in my home, so that it can inform my own inner monologue?"

He notes that he doesn't see the word "collector" as a distinct class of people, telling me that "I think anybody can be a collector." But, in the same vein, he thinks that anyone can be an artist. Allowing multitudes of different people to tell their stories ensures that there's diversity, not just in the artists being given a platform but in the different viewpoints incorporated into the conversation. Art is more than just art, it's a visual retelling of an experience. "It's not just decoration," Mitow says. "It's not just the same kind of ideas over and over and over again [at Superfine!], it's always new, and it's always interesting."

Miille notes the huge problem with gatekeeping when only putting one perspective on view. "Let's say you're a person of color and you're not seeing any artwork by people of color, then you are going to assume that art is not for you, and so then you're not even going to consider collecting art," he says. "Same for people in the queer community; if you're not seeing queer artists and queer art out there, you're thinking that, Oh, I'm othered, this is not for me. And you're not going to support it."

He understands that people in the position of choosing what art to feature are working to make money, but by blocking off an entire demographic in favor of showcasing art or artists that have been bought in the past. If white men have historically purchased art, appealing to them and only them makes the case that no one else can or wants to collect. "You're not even giving anyone else a chance to collect art," Miille says, "so you kind of have to break that barrier, and then see the results. And, I mean, the result that we've seen is that everyone collects art."

Setting forth a diverse collection of art and artists is actually advantageous for Superfine! Of the choice to show a multitude of voices, Miille says, "It's a very practical thing." It (unsurprisingly) makes for a better show if more than one perspective is offered: "If we have too much of one type of art in the fair, we're not really doing our exhibitors service."

Without adequate representation, people are not given the opportunity to be heard or understood by people who don't look like them or think like them. And, further, you can't challenge your existing worldview, if you look the same as every other person presenting: "When you only have one perspective, you aren't having a perspective on the world," Miille says. "You're having a uniform perspective, so you can't really expand or decide what view is correct, because there's only one option." This is why he thinks it's vital to open the ability to collect to a larger demographic and to allow them to purchase work that offers a perspective other than their own. "I want them to find a lot of different perspectives that they can take home and kind of incorporate into their own lives."

Hopefully, the Superfine! approach to artist representation is indicative of a larger move toward better representation. "I think, right now, people do want to hear the voices of underrepresented artists—not just visual art but film, music, poetry, everything," Mitow says. "So I think that now is a great time to be featuring these artists." But, like every shift towards better representation, the mindset needs to stay: "Any trend needs to become more than a trend."