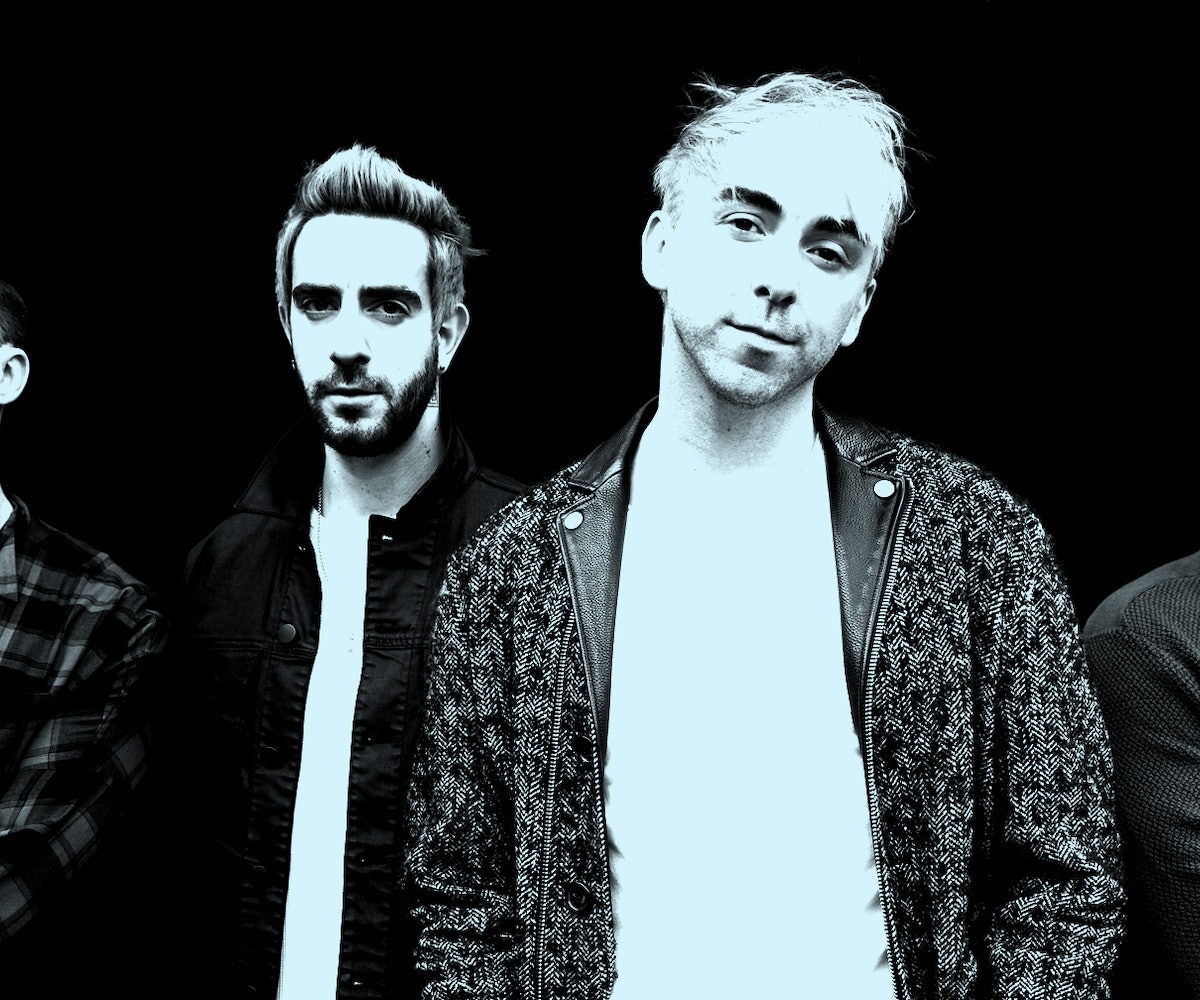 2020 is shaping up to be the year of the emo revival. In the past three months alone, we've gotten news of reunions and anniversary tours from the likes of Bright Eyes, My Chemical Romance, The Used, Motion City Soundtrack, and plenty more rockers that will bring you back to the early aughts heyday of swooped bangs and eyeliner. But not all of the bands synonymous with that early scene have gone the same route — some have stuck around this whole time. Enter All Time Low, who on Friday will release their eighth studio album, "Wake Up, Sunshine."

The album comes 15 years after the band's 2005 debut "The Party Scene," an impressive stretch of time over which the band has been consistently touring and putting out music. Despite the years that have passed, the excitement of a new record is still very much there. "I'm so pumped about this one," said singer Alex Garskath. "It's a fun record, we spent pretty much our whole summer picking it up and living in a house together, the vibe's great." Of course, the album release comes at an uncertain time, with most of the world self-quarantining due to COVID-19, but for Garskath, speaking from his home in Baltimore, that makes the release of a feel-good album that much more poignant — and necessary. Here, the singer opens up about the recording process, connecting with fans on Twitter, and why they didn't delay the album release.

Let's start with the album name, "Wake Up, Sunshine." At what point in the recording process did you land on that?

"Wake Up, Sunshine" was a song title that I had kicking around for a long time, before we even started working on the album. I didn't really expect it to become an album title, but as we wrote the record and as the songs came together, that song felt like a defining one on the record. The title in general felt like it spoke to the bigger picture of what we were doing with the music. It stuck.

What is this bigger picture of this album? What would its thesis statement be?

That the future's bright. That there's always a better future for you, if you make it. It sort of came together as we wrote more and more for the record. At first, you don't necessarily know when you go into it, you just write songs and see what feels good. But the further and further we got down the line, the clearer the picture became. We realized we were making this record about rising from the ashes, so to speak.

How has the writing process changed for you guys over the years? Is it a fine-tuned machine at this point?

Well, it's interesting because we did this one back to basics. In previous years with the last few records, I was trying to craft the songs, and the guys would come in and review what I've done and make tweaks here and there. For the most part, the bulk of the writing was always done [at that point]. Whereas with this record, we sort of went back to the way we used to do it on our old records, like "Nothing Personal," where we were all under one roof, and everybody was present from the inception of the song to the completion of it. I think that sort of lended a very unique energy to the process where we were all feeding off each other. We all like hanging out, so at the end of the day, a huge part of the process was just the fact that at any moment in time during the creative process, we were having fun with each other. I think that kind of shines through.

It's a great message to hear, considering what's going on in the world. Many other artists are pushing back their release dates — did you guys consider that at all?

We wrestled with this one quite a bit. I can't personally speak to the reasons other artists are doing it. When we talked about delaying — and we did discuss pushing back — the two main reasons were maybe people won't get their physicals in time because of shipping, and it's like, 'Well, most people are going to stream this thing anyway. They're going to get it eventually. Maybe it's more important to give them the music right now.' The other thing we sort of looked at was, 'Okay, maybe our first week numbers are going to take a hit, and we're not going to have the big mind-blowing, 'Oh, you sold this amount of records, and it's top five, whatever.' It felt like a really selfish reason to not put the music out when we promised it. At this point in time, with everything going on, it feels bigger than having a good first week.

Again, I'm not trying to throw shade at any other artists who are pushing back — that's their own journey. They can do it for their own reasons. For us personally, I couldn't find another reason to not just want to put the music out and let people escape in it. The process of making the record was an escape for us. It was healing, and it was vindicating. It brought us that much closer as a band. I just hope that sentiment shines through when everyone gets the record.

How has it been, then, using social media as the main tool to get this record out, especially in the past few weeks?

So much of what we do centers around being face to face with our fans. It's kind of been our bread and butter for our entire careers. We always facilitated that through our social media presence, but at the same time, nothing beats us getting in front of people, whether it's for a signing or an acoustic performance or playing a concert. It's unusual for us to only be on the social media aspect. But, we're adaptable; we've always rolled with the punches no matter what. I like doing the live-streams. I'm obsessed with that app Zoom everyone uses. It started as the conference call for companies, but now I've been joining random peoples. It's an interesting way to interact with people, and something I never expected to do.

There are some really impressive things that are happening online with other artists. They are fully set up in their beautiful recording studios from home, performing their song in ways that have never been performed before. If there's one sort of positive take-away from what's going on right now, it's allowing people to think creatively and think outside of the box in terms of how they reach out and connect with people.

What live streams have you been watching?

The Death Cab one was really cool. He's been crushing it. The dudes from Coldplay have that hashtag [#TogetherAtHome], that was pretty cool. What's cool about it is that for me, a fan of the music, it's very disarming to see people who you only really see on stage, and kind of have this preconceived notion of, now it's cool to see all of these people on an equal playing field doing their thing. It's refreshing.

To that effect, you guys had this kind of nice moment right before all this went down with your dive bar mini tour. How was that, getting to connect with fans in venues you haven't toured in a long time?

It was really special. We try to make a point to every now and then do a handful of really small club shows because it kind of reminds us of where we came from and how this all started. Once again, that was more of an experience for the fans who get to see a show that is a little bit more bare bones and raw. I think that's fun, especially in rock and roll.

Have you noticed a change in your fans over the years?

At this point, we're spanning generations which is kinda crazy. We've been doing this for fifteen years and it's wild to me that we have fans that have been along for most of the ride. There are people that I still see pop up in my Twitter feed saying, "Hey I was at one of your first shows when you were touring on your EP 'Put Up or Shut Up.' It's cool to see the music you're putting out now, can't wait to come out to Sad Summer Fest.'" For someone to follow us like that, they were probably in their teens when they found out about us and now they're in their 20s and 30s. That's incredible. On the other side of that coin, there are people who discovered us on our last record and are just getting into this kind of music and are in their teens now, and hopefully we'll do this for another 15 years. It's wild. I don't think any of us ever expected to have this kind of lasting staying power. We're just really honored that people care.

When it comes to the bands who were coming up around the same time as All Time Low, very few have consistently put out records like you guys have over the past fifteen years. Was there ever a time that you thought about taking a hiatus?

Not really, to be honest. I feel like a lot of hiatuses come about when either there's a big life change, like kids, and none of us have reached that point yet. But a lot of the times, it comes from people being sick of each other and sick of the band and needing time away. We've been lucky, because that's really never happened to us. We remain really close and not at each other's throats through any of this. We've just been happy to continue putting out music and touring. It's our entire existence.