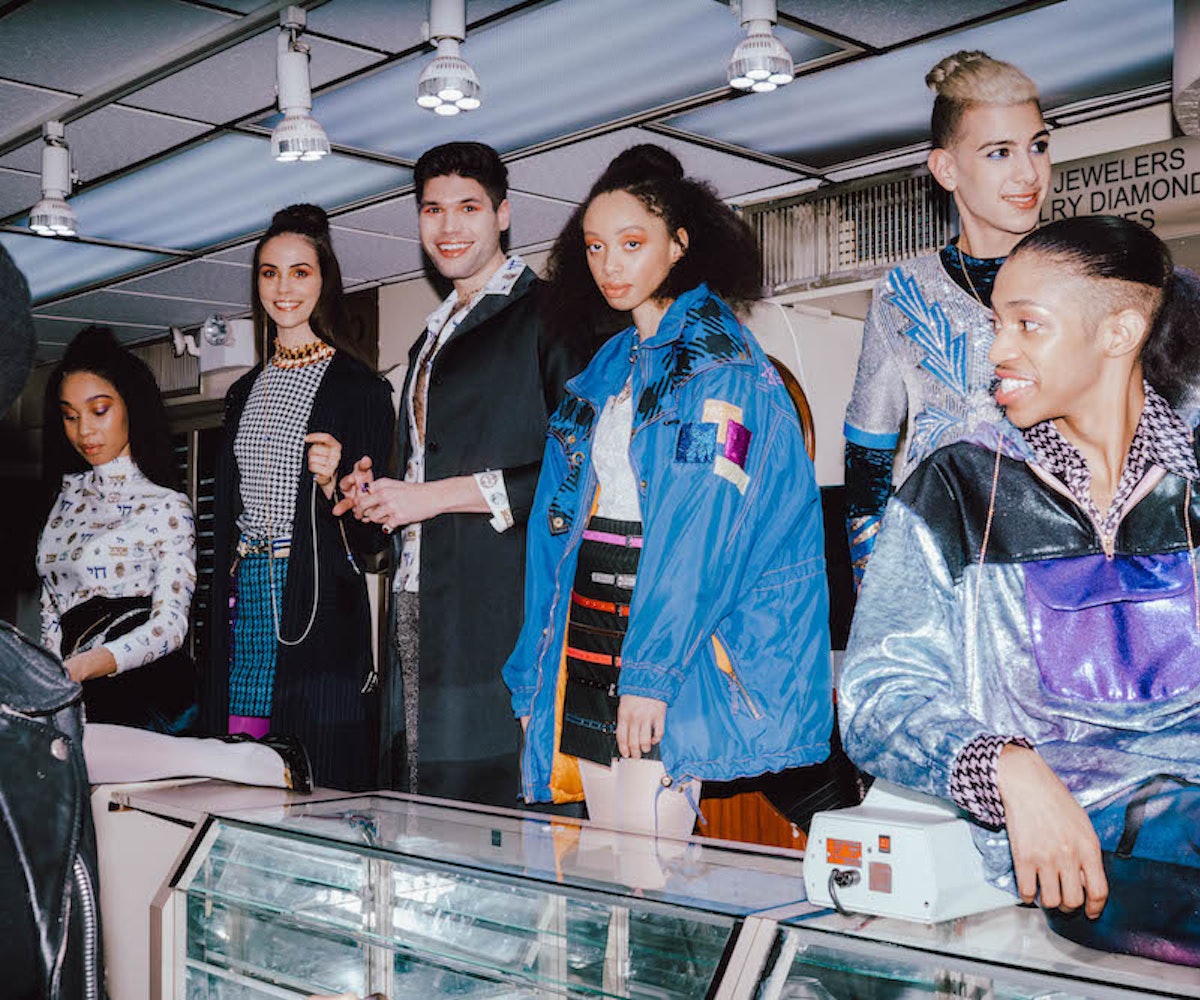 In September 2019, New York Fashion Week showgoers gathered in a sweaty apartment to witness artist-turned-fashion designer Amanda Mehl's Spring 2020 collection for her brand Amehl. Titled "How to Keep Your Husband," physical invitations had been delivered via tupperware while Mehl had shared ads for the show on Instagram featuring bowls of spaghetti with costume jewelry, a martini glass, and a cake with the brand's name on it, along with a picture of a Mehl wearing sponges in her bra.

Inside the apartment, models were dressed in sparkly and kitschy outfits — some had scrunchies in their hair, others rocked skirts made from tablecloths — and glided along dinner tables decorated with fake flowers, candlesticks, jelly cakes, and donuts. One model jumped up on the table, throwing some food into his mouth. Another wore an oven mitt covered in silver paint, and a third had a spatula attached to their belt. The show was unlike any other on the official NYFW calendar, and that was exactly the point. Amehl isn't like other brands and that's what makes the designer's creations so exciting.

Growing up, Mehl watched closely as her mother Beverly ran her own fashion label, often joining her on trips to factories in the Garment District. Originally born in Argentina, she and her family moved to Long Island, New York. "Because I was an immigrant and kind of shy, I grew up very, very removed," Mehl tells NYLON. But she also was wildly independent and very artistic with a big imagination, which gave her an outlet for self-expression when she felt like an outsider. Since Mehl didn't have cable or access to youth-friendly television programs like Nickelodeon, she often played with her mother's materials. For Purim, a Jewish holiday in which people dress in costume, Mehl once decided to drape some fabric on her body and adhere it with a stapler — what resulted was an amazing mermaid, goddess-like dress.

Throughout high school, Mehl's creativity informed her personal sense of style: vintage leather ankle-length coats from London; a cowboy-inspired shirt covered in beading and embroidery, most likely sourced from her many visits to flea markets and the Salvation Army. When college came around, Mehl decided to study visual arts in Tel Aviv, Israel. Much of her artwork then touched on her identity as a Jew, referencing traditional symbols and patterns that she eventually turned to again in her most recent fashion collection.

It was in 2016 that Mehl decided to launch her own label, Amehl, rather impulsively. "I was shopping online for a black patent leather backpack and the only ones I found were Chanel but I couldn't afford them," she recalls. "I decided to just make one and that night I came up with a whole collection in my head, which were all things I just wanted to own. Things that were comfortable and wearable and would stand out." She designed the collection in a day, describing the pieces as an "upgraded uniform."

Since its launch, Amehl boasts nine seasonal collections, all of which have been shown in interesting spaces, including a flower shop, a school bus (that was parked outside an Oscar de la Renta and Monse show), and a hardware store. For New York Fashion Week in February, Mehl decided to host her show, titled "The Exchange," in New York's famous Diamond District as a love letter to the old New York. It took Mehl months to find a store owner willing to work with her, but finally she found a space that would host a presentation with models sitting on the glass jewelry cases.

Mehl's Fall 2020 collection is made up of upcycled vintage pieces and deadstock fabrics, as well as reflective Lycra, artistic embroidery, and appliqués resembling abstract constellations. Flashy graphic T-shirts feature Jewish symbols, a response to the heightened anti-semitism happening globally, while velvet pouches, which traditionally hold Jewish prayer shawls, are transformed into bags embroidered with the brand's name on it. Mehl's fashion is also starting to look a lot like her earlier artwork, which is especially true with her latest collection. "I used to make sculptures that incorporated jewelry and chains and now we're making belts that have charms that say 'Chai', which is a Jewish symbol for life," she says.

With the coronavirus pandemic and a growing uncertainty currently affecting fashion businesses, Mehl feels big change is ahead — much like a reset button for the industry. Now, she's working on building out her e-commerce site, and while she still plans to do two collections a year, she wants to experiment with releasing product (a hoodie, for example) with content (a short film). "I'm not interested in just making a commodity," says Mehl. "It has to have a story and I think that's the future of fashion. It's not just an article of clothing, it's a culture."