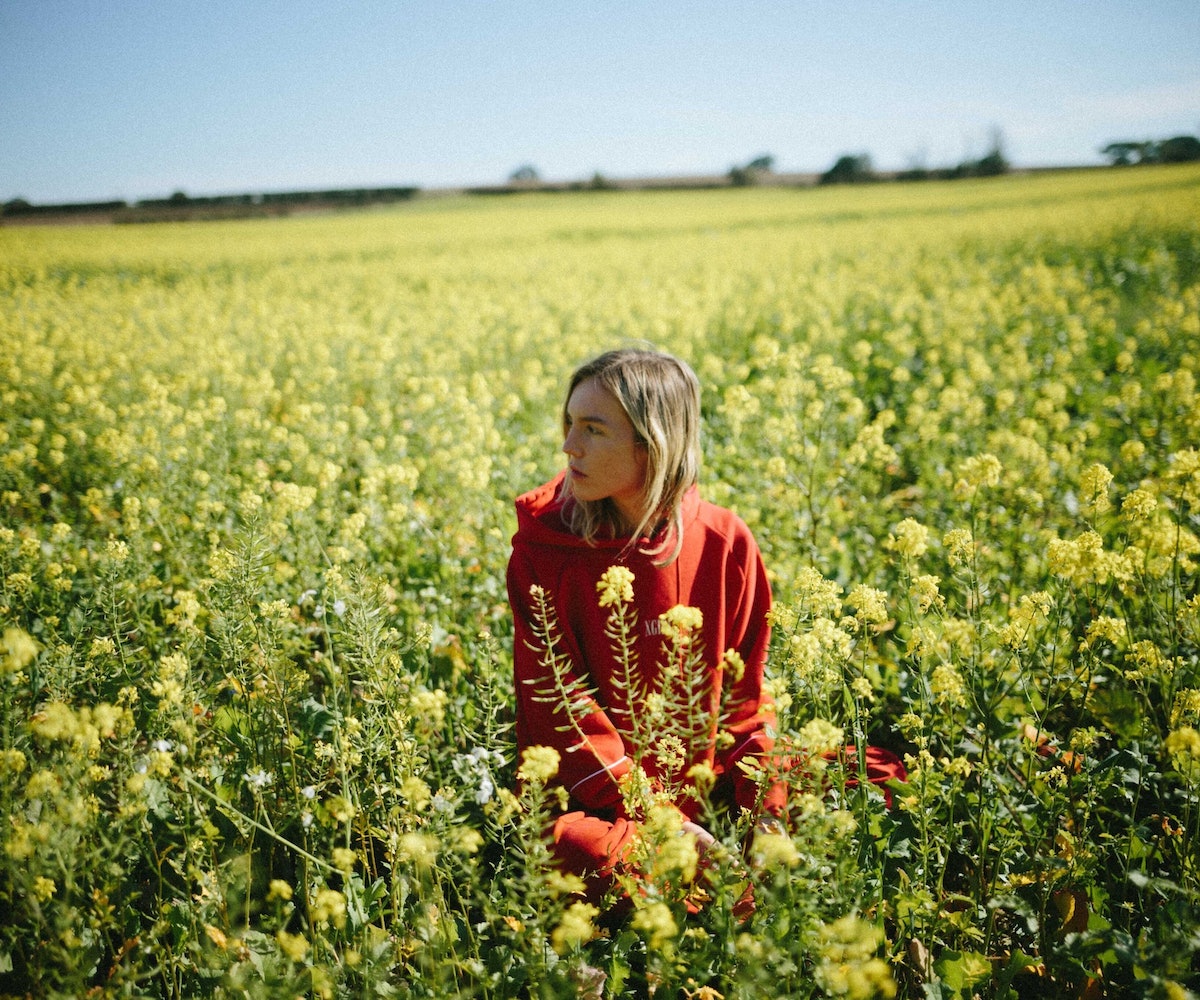 When the British indie pop singer Amber Bain first went on tour to support her solo project, The Japanese House, in late 2015, she couldn't move onstage. It was a problem of her own making, really—to play maestro to her own lush electro-tinged arrangements, she fenced herself in with accessories. If she moved suddenly, to reach her vocal pedal or simply to sway to the music, her guitar would whack her mic stand; her keyboard would come crashing to the floor.

"I was kind of boxed in," Bain, 23, says, "in this invisible box that no one else could see." We're sitting on a velvet-upholstered couch in a dressing room at Brooklyn's Music Hall of Williamsburg before her sold-out headline show in December. She wears black pants, a high-neck black tee with a white long-sleeve shirt underneath, and silver rings on her thin, pale fingers. She clutches a can of Pepsi—she's been sober throughout this run—and when she looks down, her middle-parted ash-blonde hair falls, slightly, around her face. "Everyone probably thought I was like this shy little..." she trails off before settling on a word: "loser. Which I was, for a lot of it." She laughs. "But then, by the end, by the time I actually wanted to move around, I physically couldn't."

Bain's career thus far has been a similar shedding of layers. When she got her first game-changing shout-out in 2015—the radio host Zane Lowe tapped her song "Still" from her debut EP, Pools to Bathe In, as his last-ever Hottest Record before departing BBC Radio 1 for Beats 1—she'd never toured or done major interviews; there were few photos of her online at all. (Her moniker, too, is based on a slow reveal. As a kid, Bain and her family vacationed in Cornwall, England, in a Japanese teahouse-style cottage formerly owned by the actress Kate Winslet. On the trip, a neighborhood girl developed a crush on Bain, who pretended to be a boy named Danny to simplify their interactions. The two exchanged love letters until Bain, who is gay, revealed her identity at the end of the trip.)

Although Bain has released four EPs as The Japanese House, her debut album, Good at Falling (out today, via Dirty Hit), feels like a proper introduction to who she is as herself. Sonically, she dials back the Auto-Tune and vocal effects that were near-constant on her EPs; here, her natural voice, which is low and richly textured, shines through. Her trademark dreamy, sometimes glitchy electronic production is there, but so too are acoustic guitars, piano, and violin. She's also the sole writer of all 13 tracks; her lyrics are clever but also newly direct.

The album's lead single, "Lilo"—which Bain wrote about her relationship with her ex-girlfriend, the British singer-songwriter Marika Hackman, who is also signed to Dirty Hit—sets this tone of frankness. "I needed someone to depend upon," she begins in the song. "I was alone, I was emotional." Later, Bain points to the singularity, for better and for worse, of the relationship: "Nobody else could take me from myself," she sings, floating up into her unexpectedly delicate head voice. "I wasn't searching for it anymore—the feeling I'd been waiting for."

Bain enlisted Hackman herself to star in the song's music video; at the time of filming, the two had been broken up for only a few months. In the clip, they act out various scenarios, both lived-through and symbolic. They brush their teeth, goofily, in a bathroom mirror. They lie back-to-back in bed, awake, a white sheet sliver of space between them. They hug, Bain's head nestled on Hackman's shoulder, in front of a burning Volvo car. Together, they float in dark blue water atop a blow-up mattress that deflates as the video progresses; by the end, Bain is there alone. "I've only watched the video two or three times," she says. "I'd rather be sick. It's painful because [the experience of filming it] was so emotionally positive. It was like having my heart broken again, basically." (Today, Bain and Hackman remain close friends.)

In some ways, Good at Falling is a record is about heartbreak and the specific brutality of it happening gradually. According to Bain, the upbeat single "We Talk All the Time," is about sex—or, rather, lack thereof—in a relationship as two people grow distant emotionally. In the first chorus, she admits: "We don't touch anymore, but we talk all the time, so it's fine." By the second chorus, though, she's sick of tip-toeing around the issue: "We don't fuck anymore," she almost spits out over a bright, urgent bass line, then adds, "but we talk all the time, so it's fine. Can somebody tell me what I want? 'Cause I keep changing my mind."

Originally, Bain balked at the bluntness of that last lyric—so much so that she almost didn't include it: "There's a fine line between coming across as painfully truthful or fucking dumb," she says. "I'm a very harsh critic on myself, so I obviously originally sway towards 'that sounds fucking dumb.' Simplicity is always a difficult thing. I love simple shit, but I'm also terrified to actually create it. But when you get simplicity right, that's the sweet spot."

Bain gets it right in a number of other places on the record. On "Wild," she sings about feeling like an imposter: "I'm a silver child, a first-class prize/ I know you're blind, but I'm in disguise." On "Worms," she describes her own unease in a relationship: "She's my lullaby/ And I can't sleep right." On "Everybody Hates Me," she describes the period of "about two or three years" in which she drank very heavily each day: "I've over-extended/ Replaced all of my friends with/ A linen sheet, a takeaway box/ And an incomplete crossword block."

It was this period of heavy drinking that inspired her to do something she'd never done: play a tour sober. "[Being sober has] allowed me to take a step back and actually be a human being with confidence and gumption," she says, "rather than hiding behind just being drunk and not being able to remember what I'm doing or saying. It was challenging at first. It's kind of just like being naked, but you just get used to it."

Bain also explored new territory on Good at Falling by recording in new places. For the first time, she did sessions at April Base, a studio just outside of Eau Claire, Wisconsin, that is owned by Bon Iver frontman Justin Vernon. But she also kept some collaborators from her EPs—most notably her labelmates and friends, the British pop-rock outfit The 1975. Along with Bain herself, the band's drummer, George Daniel, is credited with production across the album; its lead singer, Matty Healy, contributes backing vocals on the track "f a r a w a y." Of Healy, Bain says: "We both say things that the other finds really moving that maybe no one else really gets. We're both very stubborn and have a lot of big ideas."

The 1975 guys also helped Bain through her split with Hackman. "I just barged in [to their studio] after my breakup," she says. "I was a wreck—I felt like they were like mother hens looking after me."

Now single, Bain, as we're talking, gets a notification from Raya, a dating app for celebrities—or, as it's otherwise been called, Illuminati Tinder. "I've never met up with anyone off it," Bain says. "I've spoken to about two people very briefly. Love swiping through. Very limited lesbian community. There's literally no one on it—it sucks! Although I do know a few couples that have [met on it]—which is actually kind of insane, because every single gay person is in a relationship." She shakes her head. "Or, every gay girl is in a relationship!"

When asked if she believes in astrology—including how it relates to her potential compatibility with someone—she says, "I'm a classic Cancerian. I feel a lot of emotion, but I'm also kind of closed off at times. I'm kind of bullshitting my way through this star sign," she says, "but I love it—I love it—when people know loads about it. Like, [they say,] 'that's because you're a fucking la la la, and your moon is in Taurus.' I'm like, 'I am so attracted to you right now.'"

Bain's willingness to poke fun, including at herself, is apparent. But as she prepares to change into her stage clothes—tonight, an oversized blazer and a white tee—she becomes somber when asked what song on the album means the most to her: the acoustic version of "Saw You in a Dream." The track, she says, is about the first girl she fell in love with as a teenager, who drowned approximately four years ago. "[The song] makes me feel most emotional when I play it still," Bain says. "I hadn't really written about that [situation] … and then I saw her in a dream, and it just sort of came to me really quickly. I didn't want to be frank about that when I was in interviews at first—I didn't want to make it seem like I was taking ownership over the loss of someone. But now, I'm just like, I'm not taking any ownership at all—that's just my experience of it. And also," she says, summing it up, "knowing that makes the song so much more meaningful."