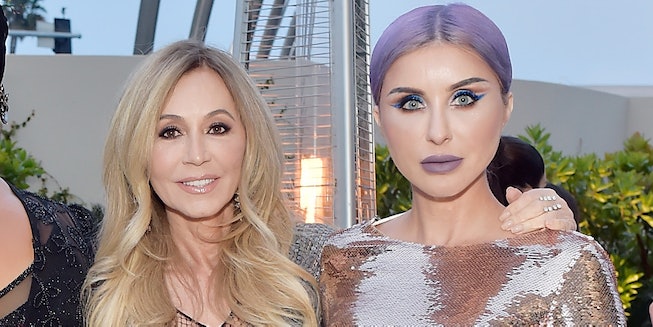 Following intense social media scrutiny, Anastasia Beverly Hills will no longer collaborate with Rodan + Fields. After announcing a "Galentine's Day" brow kit, which included six of ABH's most popular brow products, and would have been exclusive to Rodan + Fields, the reported test offering will be the last partnerships between the brands, Buzzfeed reported.

Fans of Anastasia Beverly Hills called the initial news of a collaboration disturbing, tweeting, "I will continue being a loyal ABH customer if this Rodan & Fields non-sense ends! They are an MLM and should not be associated with the great company you've built!" Others said they were "disappointed" in ABH, writing, "ABH partnering with MLMs like Rodan and Fields is so gross." Some questioned why ABH chose to initially work with a "predatory" company, writing "Honestly the ABH brow collab with R&F really disappoints me. Direct sales can be so predatory and lead to debt while promising a better life. I expected more."

Social media users continued to voice their concerns at Claudia "Norvina" Soare, president of ABH and daughter of ABH founder, Anastasia Soare, and on Feb. 5, she responded, tweeting, "I don't take consumer feedback lightly. Although this is not my the official announcement since I'm sure they haven't seen our emails yet, consider that we hear you loud and clear and this partnership is NOT happening!"

ABH then released an official statement later on Feb. 5, saying the collaboration was intended as a "short-term test" of a "limited supply of product." The statement continued, with the company writing, "We have not previously participated in MLM marketing. We do not have any plans to do so in the future." As Buzzfeed points out, the statement does not make clear whether any kits remain unsold and whether they would still be available for purchase through a Rodan + Fields consultant. When reached for comment by NYLON, the company directed us to its Twitter statement.

A spokesperson for Rodan + Fields responded to the concluded test in a statement to Buzzfeed, writing, "It's unfortunate that misconceptions about our business model have led to negative sentiment surrounding a pilot designed to celebrate women." Buzzfeed later posted an alleged screenshot of an email sent to Rodan + Fields consultants, and in the letter, it was confirmed that due to "negative sentiment surrounding misconceptions on the business model, Rodan + Fields has officially decided to end the offer today (Feb. 7) at 5 p.m. PST."

In an emailed statement to NYLON, Rodan + Fields wrote, "Core to our entrepreneurial roots, Rodan + Fields is always looking to find a way to provide new opportunities for our Consultants and Consumers. Rodan + Fields collaborated with the Founder and CEO of Anastasia Beverly Hills, Anastasia Soare, a fellow female entrepreneur, to create a limited-time pilot. It's unfortunate that misconceptions about our business model have led to negative sentiment surrounding a pilot designed to celebrate women. Rodan + Fields is proud to deliver dermatology-inspired products through our powerful Consultant community."