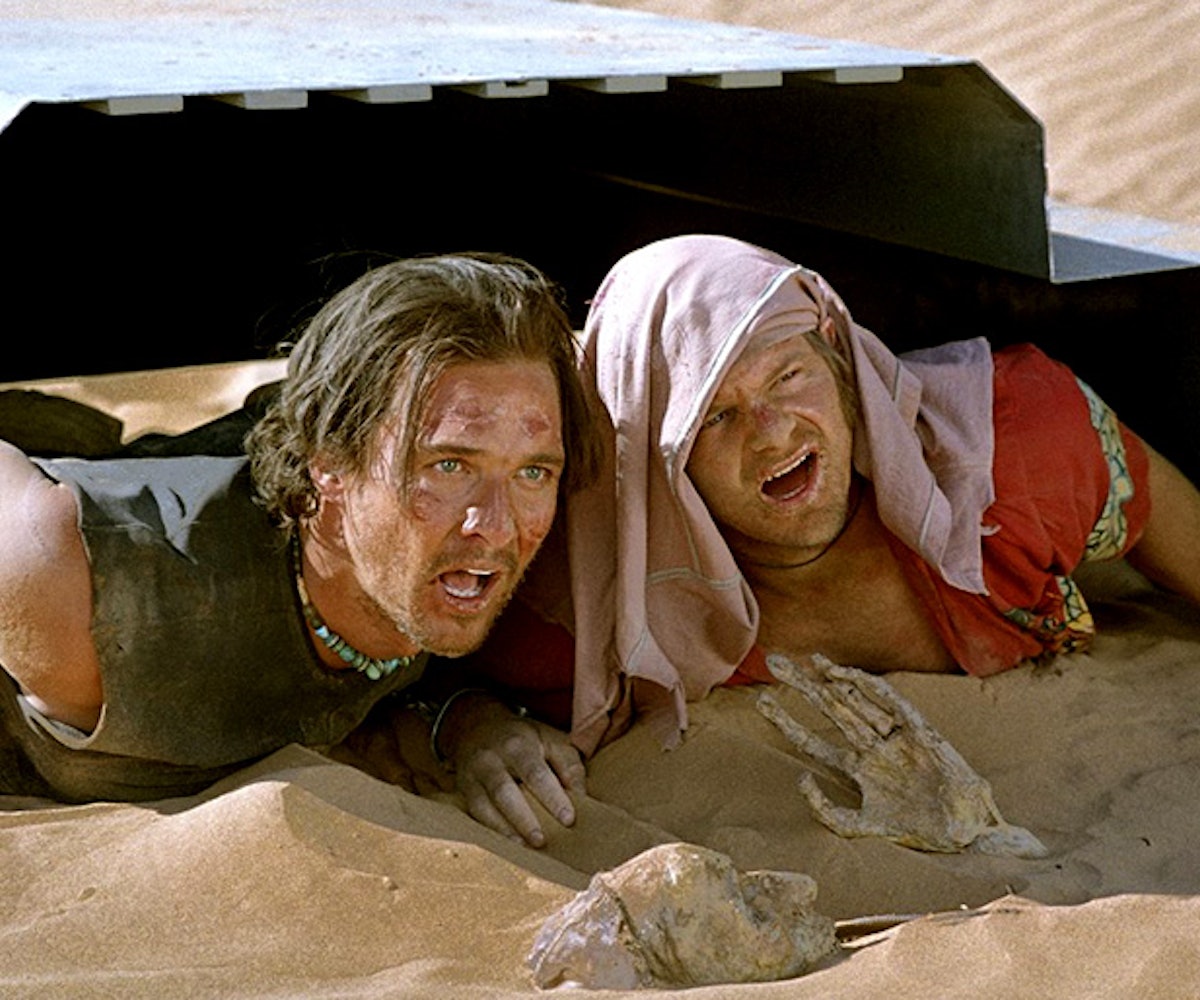 Now that the summer movie season is nearly over, we're beginning to get a picture of which blockbusters will live in infamy as major box-office disappointments (we're looking at you, Tomorrowland). To be considered a flop of epic proportions, a movie needs to be the perfect cocktail of high expectations, a bloated studio budget, and a prime release date. The following 10 films had all of those things and have nothing to show for it except for a spot on this list.

Cowboys & AliensOn paper, the title alone of this 2011 misfire should have sold this Western redux to hordes of adolescent boys who grew up thinking the wild, wild West was the coolest place on earth. The only problem is that in the age of Grand Theft Auto and Halo, sheriffs and outlaws just aren’t that badass, not even when they’re played by Daniel Craig and Harrison Ford. Cowboys & Aliens still grossed $174 million dollars at the box- office, barely making back its budget, but was still considered a major financial disappointment, thanks to astronomical expectations. Director John Favreau was coming off his mega-successful Iron Man movies, and the executive producer was some dude named Steven Spielberg.

John CarterThe biggest bomb of the decade. It’s hard to understate the magnitude of Disney’s miscalculation here, spending an apocalyptic $350 million to make and market this story based on a semi-obscure series of early-20th century novels by Edgar Rice Burroughs, starring an unproven leading man. John Carter, the first in a now-scrapped planned franchise, grossed $284 million worldwide—it needed $600 million just to break even—and the fallout was significant. Taylor Kitsch was no longer Hollywood’s next great box-office star. Director Andrew Stanton, who made his live-action debut after the unparalleled twin successes of Finding Nemo and WALL-E, was no longer Disney’s golden boy, after pitching the movie to them as “Indiana Jones on Mars.” As for the Mouse House itself? They learned their lesson, bought Lucasfilm from George Lucas. Now the only space operas they make have the words “star” and “wars” in the title.

BattleshipBelieve it or not, Battleship came out just a few months after John Carter, taking Taylor Kitsch’s year from bad to catastrophic. The Peter Berg-directed movie was doomed from the start, relying more so on special effects and its loose affiliation with the popular board game, and less on things like good dialogue and character development. Audiences rejected the movie almost immediately, banishing it to a devastating $25 million opening weekend—it cost more than $200 million to make—and spoiling Rihanna’s movie debut.

WaterworldWhen you look up box office disaster in the dictionary, this movie’s poster is what you see. Give those involved credit for having the ambition to craft an entirely original story about a post-apocalyptic civilization where the polar ice caps melted and there’s water everywhere. But not even a star turn from Kevin Costner—who was at the peak of his box-office powers—could save the bloated epic from its fate. Known back in 1995 as the most expensive movie ever made up until that point, Waterworld was always destined to sink.

The Lone RangerYou can forgive Johnny Depp and Gore Verbinski for feeling invincible. Their first three collaborations were all about pirates and were set in the caribbean, so they had to figure that all they had to do was make a historical epic that featured Johnny Depp playing one of his patented weirdos opposite the heroic straight man, throw in a few nifty set pieces, and voila: printing money. Oops. The Lone Ranger bombed at the box office, grossing $260 million worldwide, which is less than the total cost of its production and marketing budgets. But despite its poor performance, the movie is even more infamous for a casting controversy that erupted thanks to Depp’s portrayal as Tonto, a Native American.

The Adventures of Pluto NashOf the many daggers in Eddie Murphy’s film career, this one may have been the sharpest. A combination of non-jokes, corny special effects, and a ridiculous plot, Pluto Nash has the honor of being one of the worst-reviewed movies of the last twenty years. It boasts a grim 5% on Rotten Tomatoes and was number 79 on that site’s Worst Films of the 2000s list. Nash was so bad that it took no less a disaster than Gigli to beat it out for Worst Picture at that year’s Razzies. The worst part? The Adventures of Pluto Nash cost $100 million to make. Yikes.

Green Lantern It couldn’t have been a good sign that it took ten years for this comic adaptation to get made, and it turns out it wasn’t. Coming in the early days of Hollywood’s superhero craze (relative to today, anyway), everyone had high hopes for this story of a fighter pilot who finds a magical ring and uses its powers to become a defender of the universe—probably because star Ryan Reynolds seemed born to don tights and save the world while cracking wise. But a cheesy screenplay, over-reliance on special effects, and unlikeable characters meant Green Lantern was destined for a very terrestrial $220 million gross, and plans for sequels were scrapped. The movie did however introduce Reynolds to his future wife, Blake Lively, so it was all worth it in the end.

R.I.P.D.Oh hey, Ryan Reynolds! Fancy seeing you again! If you’re wondering why the Canadian actor is currently in career rehab, Green Lantern and this weird sci-fi action comedy are two massive reasons why. Reynolds and Bridges play two dead cops who spend their afterlives ridding the world of ghosts. Think Men in Black meets Ghostbusters, with none of the charm, and even less of the money. R.I.P.D’s box-office gross didn’t even crack $100 million, although at $130 million, its budget sure could.

SaharaBelieve it or not, there was a time not long ago when neither Hollywood nor Matthew McConaughey knew what to do with Matthew McConaughey. That’s how he ended up in this generic action thriller that tried to recast the actor as a modern-day Indiana Jones. And while Sahara did manage to make over $100 million at the domestic box-office, it still represented a massive financial loss for the studio, and the movie became one of the poster children for inflated Hollywood budgets—so much so that the Los Angeles Times dissected what made the modestly successful movie such a gigantic flop.

Speed RacerComing off the final two installments of the Matrix trilogy, audiences had every right to be skeptical of the Wachowski siblings' ability to tell a coherent story that prized substance over style. The trailers proved that this adapation of the Japanese anime cartoon was going to be visually dazzling, but what about the rest of it? Nnnnope. Speed Racer zoomed into theaters and exited almost as quickly, grossing a paltry $93 million that was well under its $120 million budget. Emile Hirsch's best shot at above-the-marquee movie stardom was dashed, and the Wachowski's were well on their way to become one of Hollywood's most prominent examples of squandered talent. The movie has since become somewhat of a cult classic, but that hasn't helped Warner Bros. make its money back.