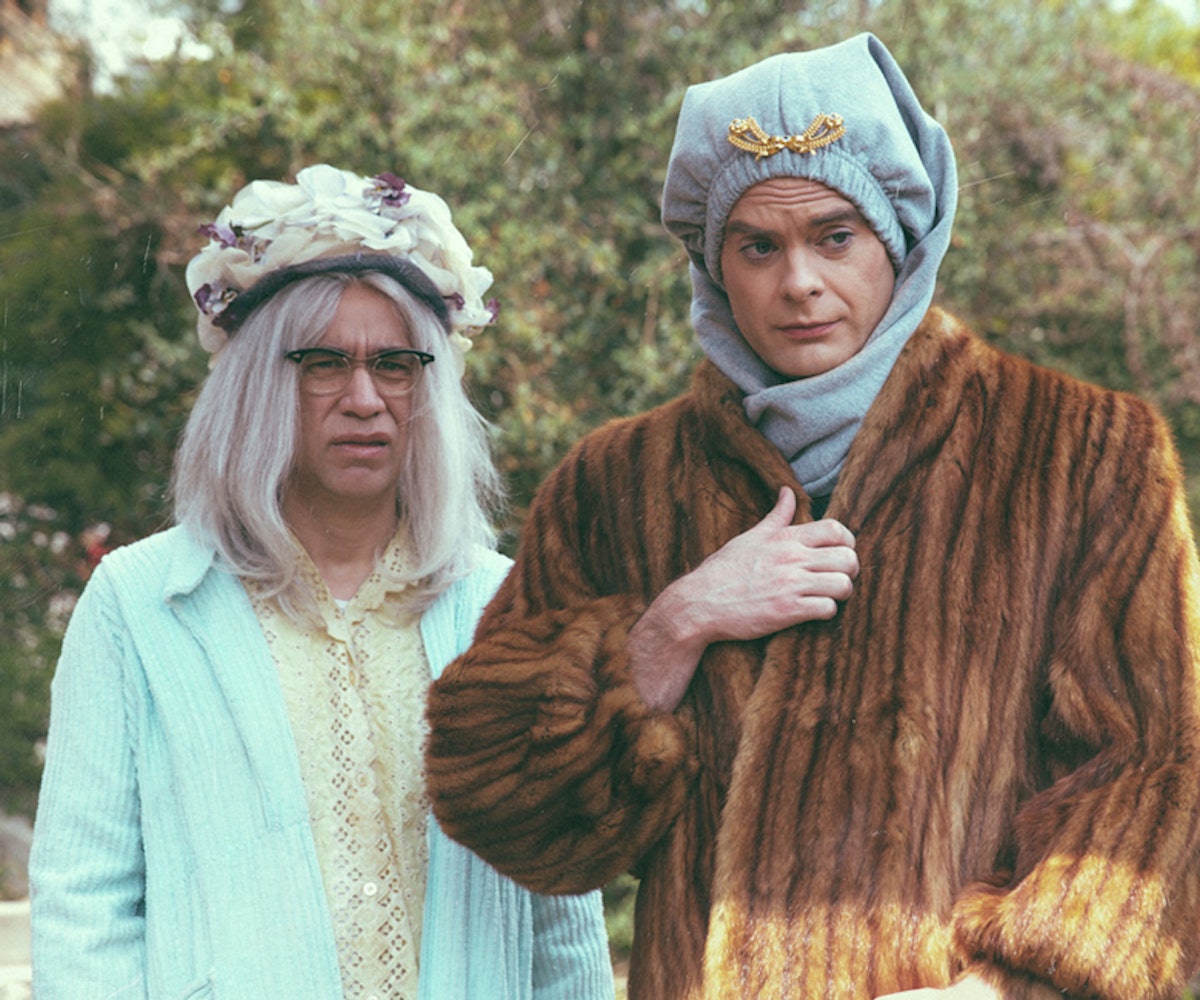 We know, we know. There's already too much TV and too little time. How can you keep up with the avalanche of episodes that networks keep burying us with? Well, the good news is that beginning this fall, no new TV shows will ever be made again. The bad news is, that was a joke. There are so many new TV shows premiering in the next few months that we can barely keep track, and luckily, you don't have to. Here are 14 of the most promising.

Somehow, between starring in movies, hosting talk shows, and writing, producing, and starring in Portland-centric sketch-comedy shows, former SNL bros Bill Hader, Fred Armisen, and Seth Meyers have found the time to create this six-part series that lampoons iconic documentaries. The first episode premieres tonight, and it's a send-up of Grey Gardens, the legendary movie about a reclusive, mother-daughter duo. As you can see from the photo above, it's going to be hilarious. Also, stay tuned for an upcoming episode where the comedians satirize everyone's favorite target, Vice. (August 20)

How do you take a beloved property and update it for a new generation? Well, if you're ABC, you add shaky handheld cameras, talking head-style interviews, and yelling action. That's the premise behind this ingenious-looking reboot of the beloved Jim Henson characters, who in this new primetime comedy are getting a Modern Family-style sitcom that takes a look at their personal lives. The show will follow the Muppets as they work behind the scenes for Up Late with Miss Piggy, a fictional talk show that follows Jimmy Kimmel Live! Expect celebrity cameos galore. (September 22)

Thanks to the success of shows like American Horror Story and True Detective, anthology series have become all the rage, and this latest one tracks two Bonnie and Clyde-style serial killers as they terrorize the Sunset Strip circa 1982. It marks the return of Ed Westwick's smolder to TV, and also features Erika Christensen, who proved she can play a psycho with the best of them in 2002's Swimfan. (October 27)

Named after the FBI training facility in Quantico, Virginia, this thriller follows a group of young recruits who join the FBI for very specific reasons that will be revealed in flashbacks. But in a very intriguing twist, a flash-forward will reveal that one of the recruits will eventually become responsible for masterminding the biggest terrorist attack on American soil since 9/11. Also intriguing is that the show's lead is Priyanka Chopra, winner of the 2000 Miss World pageant, one of the highest-paid actresses in Bollywood, and despite being completely unknown in the U.S., one of the most famous women in the world. (September 27)

Originally concieved of as a half-hour comedy for Showtime, the CW stepped in and saved it after the premium cable network eventually passed. Now re-worked as an hour-long sitcom, Crazy Ex-Girlfriend stars writer and comedian Rachel Bloom as a slightly off and very successful woman who drops everything to move to a small town to try and win the affections of an ex-boyfriend. Bloom has long been one of the brightest voices in comedy, and this show—which features regular musical numbers—is the perfect vehicle to showcase that. (October 12)

The newest, shiniest product in the hyper-efficient Netflix assembly line, Narcos is the latest retelling of the Pablo Escobar mythos, this time shifting between the life of the most notorious drug kingpin in history, and the DEA agents tracking him down. And that's where this becomes must-stream TV. Those agents are played by total babe and rising star Boyd Holbrook, and an actor named Pedro Pascal, who you might know better as one Oberyn Martell, a.k.a., The Red Viper. (August 28)

Nobody asked the Peacock network to reboot their ill-fated hit about seemingly regular people who discover they have superpowers, but here we are. This new version is being touted as a 13-episode miniseries, which is just NBC covering their asses in case it flops. If the show is a hit, expect more. The new story, which features mostly new characters, takes place after a terrorist attack leaves a small Texas town devastated and people with extraordinary abilities are blamed for it. They go into hiding and presumably team up to find the real culprit. Our hopes here are that series creator, Tim Kring, took all the elements of what made the first season of Heroes so successful, and stuck to them. (September 24)

Jaimie Alexander has spent years kicking Norse-god ass in the Thor movies, so it's about time she got her own starring vehicle. In Blindspot, she plays a woman who wakes up in Times Square with no memory and covered in tattoos. The FBI believes that these tattoos are clues to a murder they haven't solved yet, which means that this is basically Memento for network television. Nothing wrong with that. (September 21)

Kurt Sutter's long-running biker drama Sons of Anarchy wasn't for everyone, but for a while there—with its balls-out violence and hardboiled attitude—it was one of the most original dramas on TV. Expect much of the same with Sutter's followup, set in the 14th Century with a plot so out there we'll let Wikipedia explain it for you: "Set in the early 14th Century, a knight in King Edward I’s army is broken by the horrors of war and vows to lay down his weapon. But when violence finds him again, he is forced to pick up the bloodiest sword of all: an executioner's sword." Okay, so that sounds crazy—and crazy good. (September 15)

The Walking Dead has been such a juggernaut for AMC that they just couldn't help themselves with this spin-off. They just had to do it. But how could they tell the same story while mixing it up? Simple: Move the setting from Georgia to Los Angeles, and shift the time period to the very beginning of the outbreak that is eventually going to wipe out most of humanity. Works for us! (August 23)

Master of None (Netflix)

There no doubts that as soon as Parks and Recreation ended, the Aziz Ansari sweepstakes came in fast and furiously. Well, congratulations to Netflix, who nabbed the comedy superstar and gave him his own series about a 30-year-old New Yorker who "has trouble deciding what he wants to eat, much less the pathway for the rest of life." The show, which Ansari says is based partly on himself, sounds like fairly standard stuff, but in his deftly comedic hands, expect something wholly original and entirely Ansarian. (November 6)

Replacing David Letterman is no easy feat. In fact, the man CBS tapped to be his successor, Stephen Colbert, has claimed that it is impossible. That is why the former Comedy Central star won't even try. Instead, he'll attempt to make The Late Show his own, abandoning the hawkish personality that made him a star on The Colbert Report, in favor of well, himself. Colbert is not a stand-up by trade, so don't expect him to make his mark in the opening monologue. His background is in sketch comedy and he's a gifted song and dance man, so expect him to play characters and put on a show. Whatever happens, it will be fascinating to watch. (September 8)