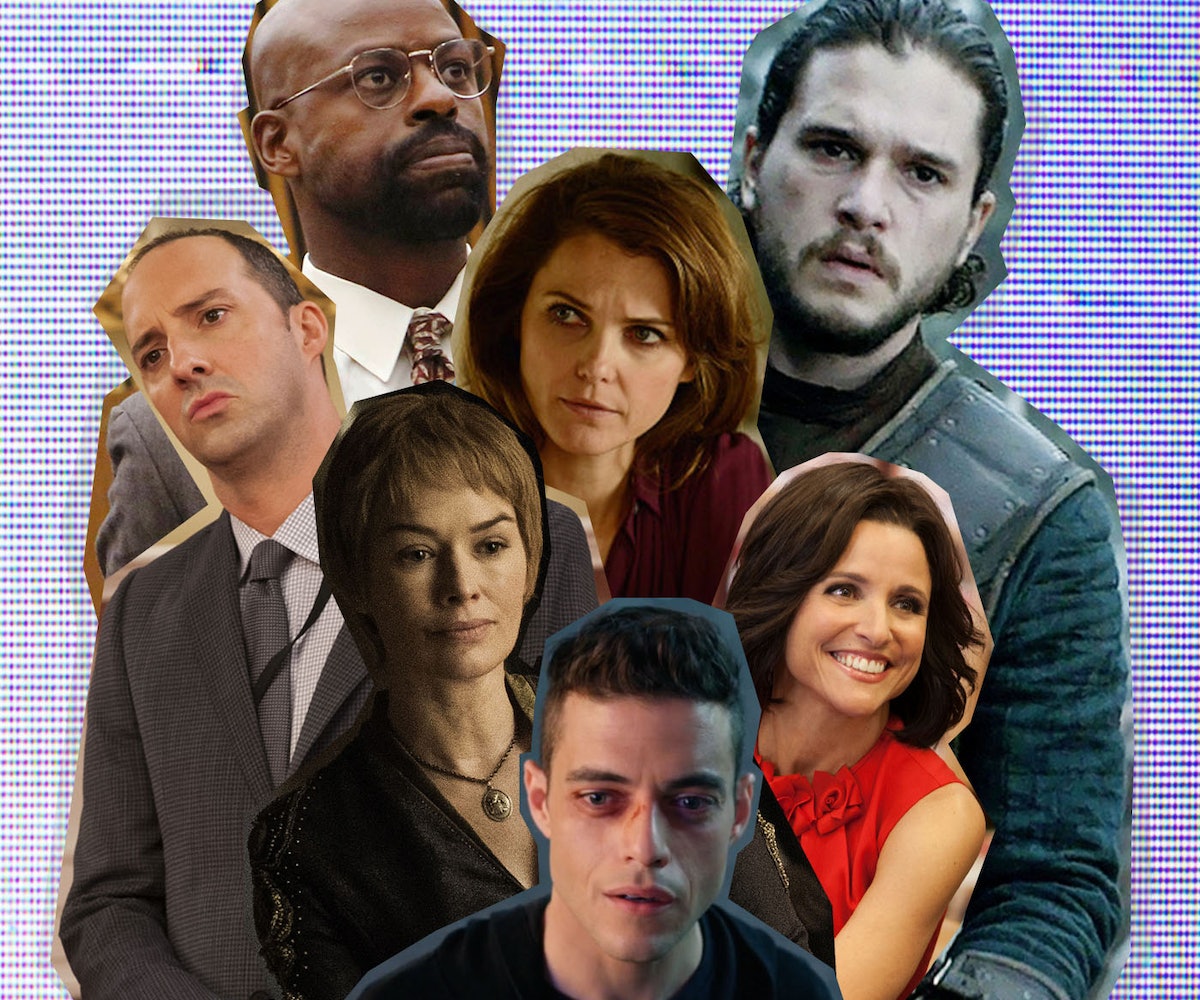 It’s become cliché to call this time the Golden Age of Television, but take one look at the nominees for this Sunday’s 68th Primetime Emmy Awards, and you’ll see that it’s true. From Game of Thrones (23 nominations) to Master of None (four nominations), the TV landscape is packed with highwire storytelling, risk-taking performances, and premium production values, making this a great time to be a couch potato. But the quality of programming means that it wasn’t easy predicting Sunday night’s big winners, but because we love you, we gave it our best shot.

It’s only common sense that the show with the most nominations will win the top prize. It’s pretty much a given, then, that Game of Thrones, which leads all shows with 23 nominations and is coming off its most popular and arguably strongest season, is a lock for this category. Homeland, House of Cards, Better Call Saul, The Americans, and Mr. Robot are all binge-worthy in their own right, but frankly, none of them come close to the 360-degree achievement that was Game of Thrones’ sixth season.

Fans of FX’s The Americans rejoiced when, after four heart-stopping seasons, Matthew Rhys finally got nominated for his dazzling work on the spy drama. And while totally deserving of the prize—many have him as a dark horse favorite—it’s Rami Malek’s to lose. His schizo, star-making turn was unlike anything we’ve ever seen in a leading role on television, and with category stalwarts Jon Hamm (last year’s winner) and Bryan Cranston long gone into the sunset, expect Malek to accept the first of what could be many Emmys in the years to come.

Outstanding Lead Actress in a Drama: Keri Russell, The Americans

Much like her costar (and real-life partner) Matthew Rhys, Keri Russell’s entry into this category is long overdue. Her performance as a Russian spy posing as an American mother and travel agent is consistently mesmerizing in its deliberate opaqueness—you can never quite tell what exactly is going on behind those eyes. But Russell faces stiff competition from last year’s winner Viola Davis, whose performance in How to Get Away with Murder elevates that show to the top of the network drama class. This one is practically too close to call, but in a year where The Americans finally stormed the major categories, we’re giving the edge to Russell.

We can’t remember the last time the fate of a television character was debated as much as Jon Snow’s in the period between Game of Thrones’ fifth and sixth seasons. So, when the show finally returned, all eyes were on Kit Harington to see how he’d portray a newly resurrected Snow. Would there be a deadness behind those dark brown eyes? Would he be without a soul? Quite the opposite. Harington turned in a deeply soulful and moving performance as his character wrestled with his new status as a demi-god. Harington's Snow was easily the heart of GoT season six, overshadowing last year’s winner in this category, Peter Dinklage. His performance in the season’s climactic episode, “The Battle of the Bastards,” is worth the prize alone.

Props to NYLON fave Constance Zimmer for her nomination in this very tough category. Her quippy, whip-smart performance on UnREAL is one of the best on television, but unfortunately, while that show’s audience is devoted, it pales in comparison to that of Game of Thrones. And when thinking about that show’s monstrous sixth season, it’s hard not think about Lena Headey’s Cersei Lannister, gazing out a window in barely contained ecstasy as a big part of her city—as well as many of her enemies—burns to the ground. For that alone, we’re giving it to her.

This might be the toughest category of the entire night, if only because it’s nearly impossible to imagine Transparent not winning it. But that is a testament to the unimpeachable genius of Veep, which ended Modern Family’s run last year, and which, after five seasons, is at the very top of its game. (For the record, Transparent, one of the greatest shows of the last decade, is equally deserving of this prize.)

If Transparent doesn’t nab the prize for Outstanding Comedy, Amazon’s flagship show will have its moment when Jeffrey Tambor inevitably accepts this award for the second year in a row. His performance as Maura Pfefferman can waver between heartbreaking and exhilarating in the same scene, and is the show’s emotional anchor, which, considering we’re talking about Transparent, is saying something.

Fact: JLD has won this award every single year she’s been eligible, so despite Ellie Kemper’s sun-splashed performance on The Unbreakable Kimmy Schmidt and Tracee Ellis Ross’ important work on Black-ish, this award is one of the surest things of the night. She's that good.

When a race is as tight as this one, the best bet is to go with last year’s winner. (The Emmys love a repeat triumph.) That’s why we’re choosing Hale, whose anxious, eternally loyal Gary is one of the most adorably sympathetic characters on TV. Having said that, we could just as easily give this to Tituss Burgess (last year’s favorite) for his scenery-chewing performance on The Unbreakable Kimmy Schmidt, or even to Hale’s co-star, Matt Walsh, who had a breakthrough season thanks to a surprisingly moving adoption storyline. Our sentimental pick, however, goes to Louis Anderson for his gender-bending performance on Baskets, the biggest—and best—oddity on TV.

Don’t be deceived by Mom’s pedigree. Yes, it’s a CBS sitcom from the creator of Two and a Half Men, but because it centers around a mother-daughter duo battling addiction, the show grapples with some pretty serious issues. That might explain why Janney, who won the award last year, is favored to repeat this year. If it was up to us, Judith Light or Gaby Hoffman would win, because Transparent, but Janney is one of Hollywood’s most consistent MVPs and deserves whatever statues come her way. (Shout-out to Kate McKinnon, who in 2016 became a must-watch performer in whatever medium she’s in.)

Besides Game of Thrones, this was easily the most Zeitgeist-like television event of the year, so it makes sense, then, that the rookie season of this FX anthology series nabbed the second-most nominations of the night. With 22 in total—just one behind HBO’s juggernaut—The People Vs. OJ Simpson’s victory is an open and shut case.

This Emmy was won the second Courtney B. Vance’s fire-breathing Johnny Cochran stormed onto the screen in episode three of FX’s breakout hit. His Cochran was loud, charismatic, and impossible to take your eyes off of—just like the real thing. That his competition—heavyweights like Tom Hiddleston, Idris Elba, and Benedict Cumberbatch—don’t stand a chance, only speaks to the brilliance of Vance’s performance.

Paulson’s tour de force depiction of Marcia Clarke was arguably the greatest performance on TV this year, so she’s essentially a lock to win her first Emmy, despite being nominated every year since 2012. (Paulson has another nomination this year for her work on Ryan Murphy’s other show, American Horror Story.) Both Kirsten Dunst and Kerry Washington turned in worthy performances in Fargo and Confirmation respectively, but Paulson, who managed to flip public perception of Clark by giving viewers a heart-wrenching glimpse into her inner life, is practically unbeatable.

As good as Paulson was, it’s impossible to imagine her without Sterling K. Brown’s Christopher Darden by her side. The fact that Brown is a dead ringer for his real-life counterpart, doesn’t hurt, but his performance—soft, vulnerable, and laser-focused—was one of the highlights in a show full of them.

Fargo’s casting director deserves their own Emmy for envisioning the veteran actress Jean Smart, a typically warm and comforting screen presence, as the cold and ruthless matriarch of a Midwestern crime family. Sarah Paulson probably won’t win her second Emmy of the night, and both Kathy Bates and Melissa Leo have had luck at award shows in the past, but this feels like Smart’s year.