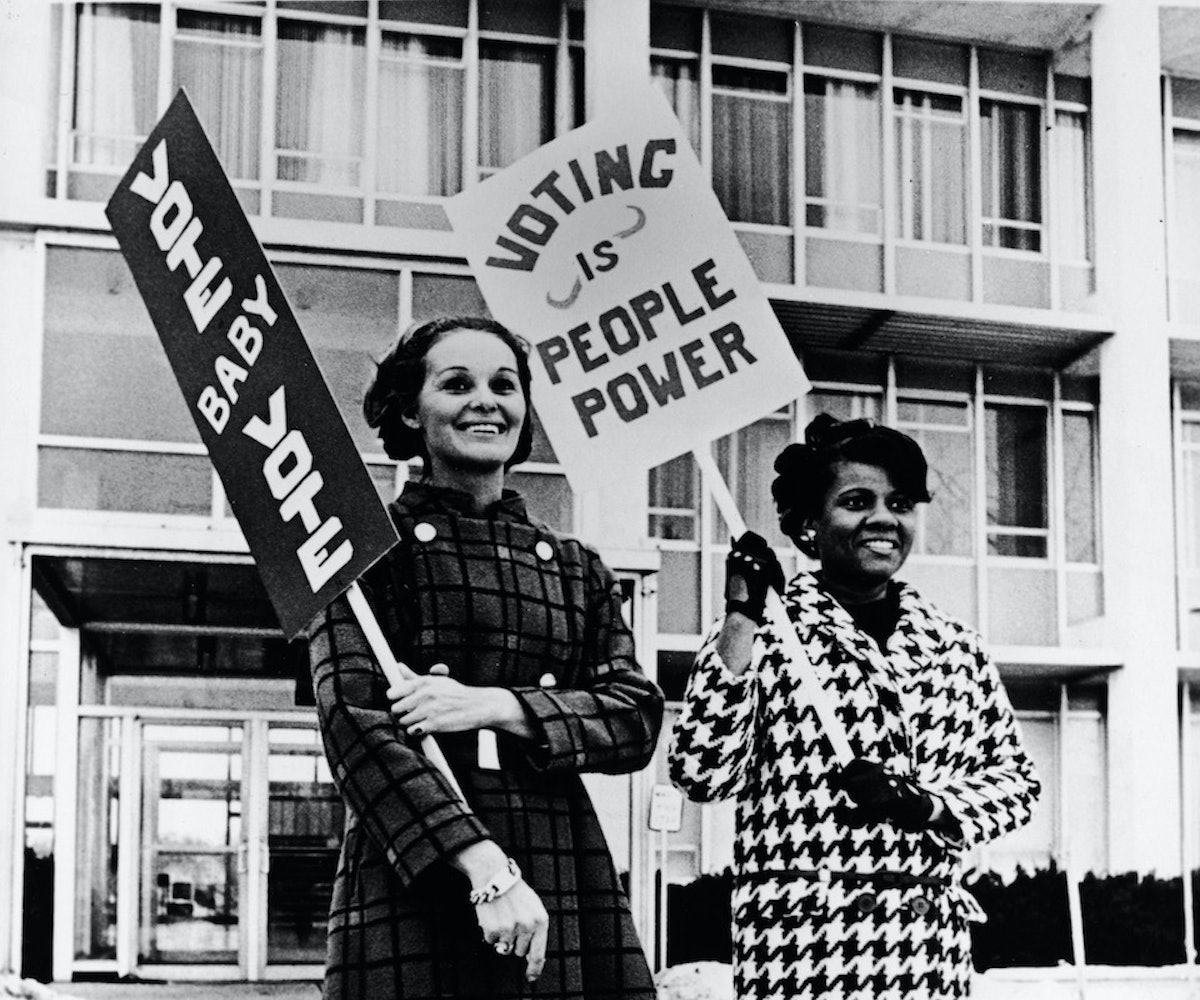 More than 40 years since the passage of Roe v. Wade, United States politics are still fraught with arguments over the sovereignty of women’s bodies and decisions that make the upkeep of women’s reproductive health all the more expensive and difficult. The year is 2016, and although it may be hard to face reality, there lies a lamentable truth: The accessibility of women’s healthcare is not a priority for many of the country’s lawmakers.

While Planned Parenthood has held its ground in the harsh spotlight, for the past few years in particular, as various bills have attempted (and some succeeded) to defund the healthcare nonprofit, many proposed laws are affecting women’s health in other ways. The tampon tax remains a topic of debate as states individually decide whether or not feminine hygiene products can be considered “luxury items” (hint: they are not luxury items) while birth control safety and accessibility is also called into question. While the sum total of legislative decisions regarding women’s health cannot be considered wholly good or bad, it’s clear that the country is in a state of change, and by voting for officials who have your needs in mind, it’s possible to shape the future state of women’s health in the United States.

These 10 decisions, debates, and movements, have defined the political atmosphere of women’s health thus far in 2016. Now it’s time to get to the voting booth to make sure we continue to move forward.

One of the most important Supreme Court cases regarding women’s health since Roe v. Wade, Whole Woman’s Health v. Cole is calling into question the legality of a Texas bill that has come to be known as HB2. The bill, passed in 2013 by the Texas legislature, requires that abortion providers have admitting privileges at hospitals within 30 miles of the clinic in order to perform an abortion, bans abortion at 20 weeks of pregnancy, places restrictions on the abortion pill, and requires that all abortion clinics meet the standards of ambulatory surgical centers—a combination of restrictions and requirements which, overall, greatly increases the cost to abortion providers, requiring many to shut down, and makes abortion significantly more inaccessible to women who need them. Now that the case has reached the Supreme Court, it has elicited calls to #StopTheSham. Before Texas Governor Rick Perry signed the bill into law, the state had 40 abortion clinics, and if the Supreme Court upholds the law, then it could be down to just 10. This law most affects low-income women, who would end up having to shell out more money to obtain abortions due to travel costs and work leave. The public will not hear of the Court’s decision until June, but now it seems that the decision could rest on swing-voter Justice Anthony Kennedy. However, a recent Supreme Court decision to overturn a similar Louisiana bill shows promise that this major decision could result in a pro-abortion rights vote.

Ohio governor John Kasich has signed every piece of anti-abortion legislation that has passed his way, but his latest move has completely defunded Planned Parenthood in the state. The bill signed prohibits organizations that provide “non-therapeutic abortions”—any abortion that is not due to rape, incest, or the risk of a mother’s life—from receiving state and federal funding. This strips Ohio Planned Parenthood from $1.3 million in funding, even though Planned Parenthood cannot use federal funding for abortions in the first place because of the Hyde Amendment, passed in 1976. Kasich’s decision also affects Ohio Planned Parenthood’s Healthy Moms, Healthy Babies neighborhood outreach program, which provides pregnancy education and support for low-income African American women in Mahoning County. Although the state’s Planned Parenthood will still receive federally protected funding through Medicaid, this decision still cuts 7 percent of its funding.

A class action lawsuit led by stage actress Margo Seibert is working to end the 4 percent tax on feminine hygiene products, like pads and tampons, stating that the tax is in violation of the Equal Protection clauses of the U.S. and New York State Constitutions. "Tampons and sanitary pads are far more necessary to the preservation of health than Rogaine, dandruff shampoo, or many other products the department considers medically exempt," the five plaintiffs stated. "The department's double standard for men and women finds no support in the tax law and serves no purpose other than to discriminate." If the plaintiffs win, then women who have purchases pads or tampons in New York in the past two years could receive a full tax refund.

Similar to the Texan HB2 bill up for Supreme Court debate and Louisiana’s struck-down law, a new bill in Florida could prevent abortion providers from receiving federal funding. The bill, called HB 1411, was passed by the Florida Senate and will now go to anti-abortion Governor Rick Scott for final approval. The bill increases requirements for abortion providers to be inspected and to work with hospitals, which could result in the closure of clinics, as well as the increasing difficulty for women to safely and affordably obtain abortions. Florida House Minority Leader Mark Pafford fought against the bill since abortion providers cannot use federal funding for abortions in the first place, so funding cuts would hurt other services like preventative screenings and reproductive healthcare. "This bill is a vicious attack on women in this state," he said.

In Missouri, 32 women have sued pharma giant Bayer AG over serious injuries caused by its permanent birth control implant Essure, which is made up of two metal coils that are implanted into the fallopian tubes. The FDA has asked Essure to look into its safety and effectiveness, but still, over 750,000 women have had the birth control device implanted in a non-surgical process. Bayer has released a statement saying that plaintiff’s complaints of injury—including “extreme fatigue, depression, weight gain, allergy and hypersensitivity reactions”—are unfounded. Still, regulators have received more than 5,000 complaints about the device since 2013, and although it remains to be seen if the women suing the company will receive any type of consolation, the FDA is working with the pharma company to continue looking into the device’s safety.

Thanks to a judge in California, the filming and release of Planned Parenthood sting videos—filmed in secret and edited to stretch the truth of the organization’s operation—will now be illegal. The National Abortion Federation, a nonprofit protecting abortion providers, accused anti-abortion group Center for Medical Progress and its founder David Daleiden of illegally filming its meetings and editing footage in deceptive ways. San Francisco Federal Judge William Orrick determined that nothing illegal was happening during the filming of the footage and placed an injunction on continued distribution.

In good news, 25 public schools in the Bronx and Queens will now provide tampons free of charge to students. By the time the pilot program is fully implemented, by the end of the month, roughly 11,600 students will have access to tampons via bathroom dispenser. “Girls in these districts face the greatest financial hardships. I want to ensure none of them lose class time, face illness or feel humiliated because their family cannot afford pads,” said City Councilwoman Julissa Ferreras-Copeland.

In a movement that’s likely to be mirrored by New York, the Chicago City Council has voted to remove its 1.25% tampon tax. While the state of Illinois maintains its tax on feminine hygiene products, it could end that tax by early 2017. Minnesota, New Jersey, Pennsylvania, Massachusetts, and Maryland have already abolished the tampon tax, but this movement could hopefully spread across the country. In California, a new bill could also abolish the tax in the Golden State.

While headlines point toward the potential for more unwanted pregnancies due to the nationwide attack on abortion providers, many states are helping women to take control of their own reproductive lives by making birth control easier to obtain. In Vermont, proposed bill H.620 is working to make sure citizens can still affordably obtain birth control, should the Affordable Care Act ever get overturned once President Obama leaves office. In Tennessee, a new bill approved by the Senate will allow women to get birth control prescriptions from pharmacists instead of getting it prescribed by physicians, saving women money by not requiring them to get a doctor’s appointment in order to obtain birth control. And in Delaware, the state has announced a $10 million partnership that will train providers to prescribe more types of birth control in order to tackle both the state’s high teen pregnancy rate and high unexpected pregnancy rate.