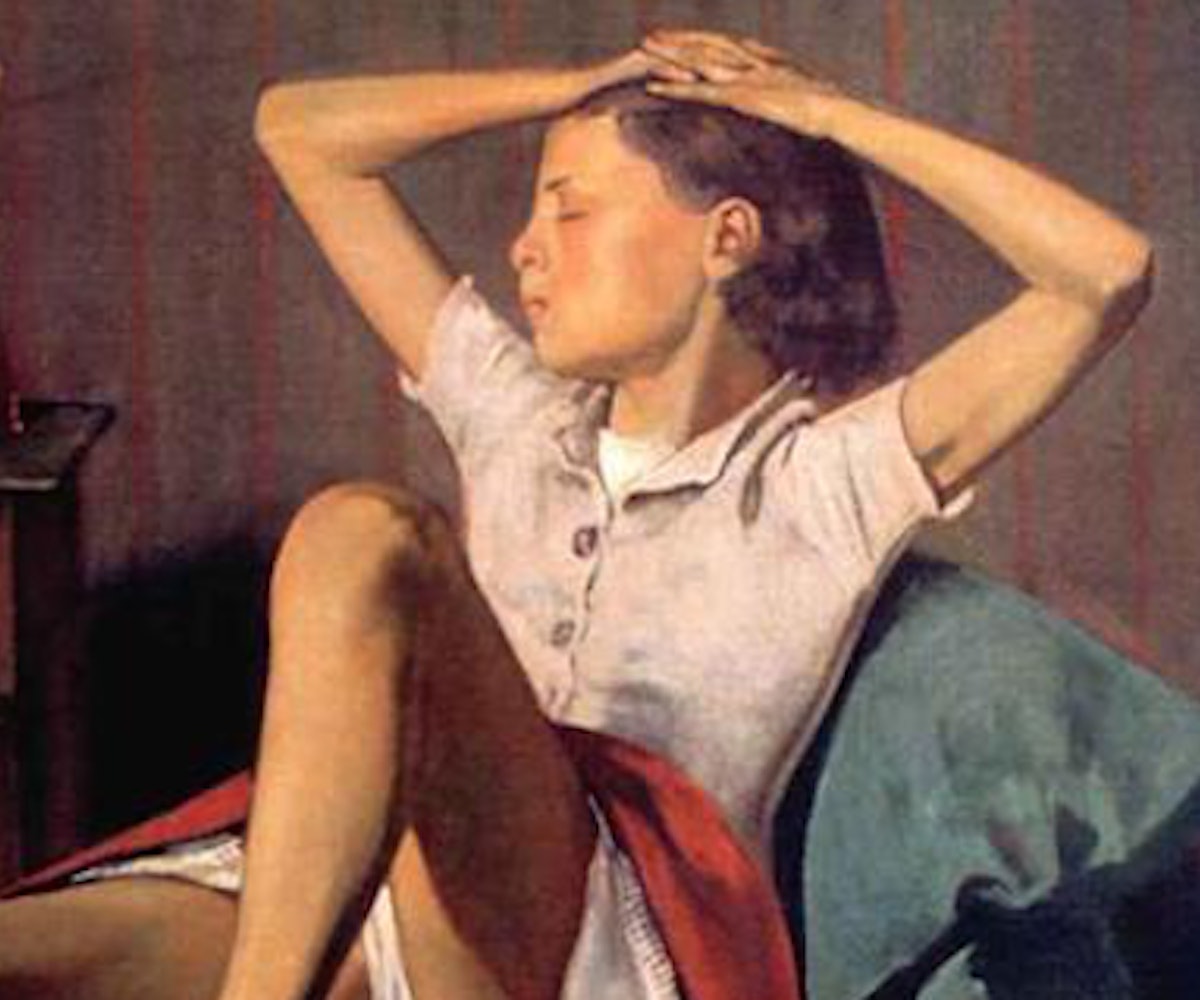 + Over 11,000 people have signed a petition to remove the Balthus painting, "Thérèse Dreaming," from the Metropolitan Museum of Art. The painting contains a sexually suggestive and voyeuristic look at a young woman while she's daydreaming alongside a cat who is suggestively lapping milk from a saucer. The petition states: "Given the current climate around sexual assault and allegations that become more public each day, in showcasing this work for the masses, The Met is romanticizing voyeurism and the objectification of children." It also suggests that the painting be removed and replaced by a work by a female artist from the same time period. And while Balthus and many other male artists have depicted women in problematic ways (to put it charitably), is removing work which makes us uncomfortable just a way to bury conversations we're too uncomfortable to face? Certainly seems like it could be!

+ Justin Trudeau, world hero, has settled a long-running debate that has been tearing at the fabric of our nation for far too long: Die Hard is a Christmas movie. End. Of. Story.

+ Ever wonder what it would be like to sing after just having eaten a ghost chili pepper? YouTuber Chili Klaus previously experimented with orchestra members eating the famously spicy fiend. Now, he's gone back to his hometown and asked the lads from Denmark's Herning Boys Choir to sing the Christmas classic "O Come, All Ye Faithful" before and after downing a ghost chili. The results were... well, the boys put up a quite a fight, and we admire that they kept up such brave, stoic faces throughout the whole piece. It was almost recognizable, even! Let's hope each and every one of them was treated to all-you-can-eat ice cream afterward.

+ Mark Hamill couldn't tell anyone about that big plot twist at the end of The Empire Strikes Back—you know, the one about him and Darth Vader? Look, we won't say it just in case you've been living under a rock for the past 37 years. But as it turns out, Harrison Ford was more than a little peeved that his co-star didn't let him in on the big secret. Hamill says that when the scene played during the film's premiere, Ford turned to him and exclaimed: "Hey, kid, you didn’t fucking tell me that." We deeply appreciate that Hamill takes #nospoilers so seriously.

+ Flying Qantas this holiday season? If you're hoping to snag a seat in the airline's business lounge, you'd better make sure you comply with their dress code. That is to say: no UGGs allowed. Several people are reporting that they were turned away from the lounge for wearing their favorite pair of fuzzy hot dog buns, even when they spotted sloppily dressed people who had been let in. The problem is that the airline considers UGGs to be "sleepwear," and no sleepwear shall darken the doorstep of Qantas Business Lounge. And, while UGGs might not be our cup of tea, keeping comfy while flying is essential, and the boots are nothing if not comfortable. Qantas has defended their dress code in response to criticism on Twitter. Other things that are not allowed: thong sandals and head-to-toe gym wear, all for the sake of "[creating] an environment that everyone can enjoy." Because everything else about flying would be an enjoyable experience if it weren't for all of the UGGs and sweatpants.

+ Winter is in full swing now, which means it's the perfect time to be planning a tropical getaway. But what to wear? Head on over to Everything But Water's sale section, where you'll get an additional 25 percent off its selection of swimwear, sandals, coverups, and more. We're partial to this Stella McCartney striped one-piece, but really can imagine ourselves in just about any of these suits, lounging poolside, drink in hand.

"Resentment is like drinking poison and waiting for the other person to die." - Carrie Fisher