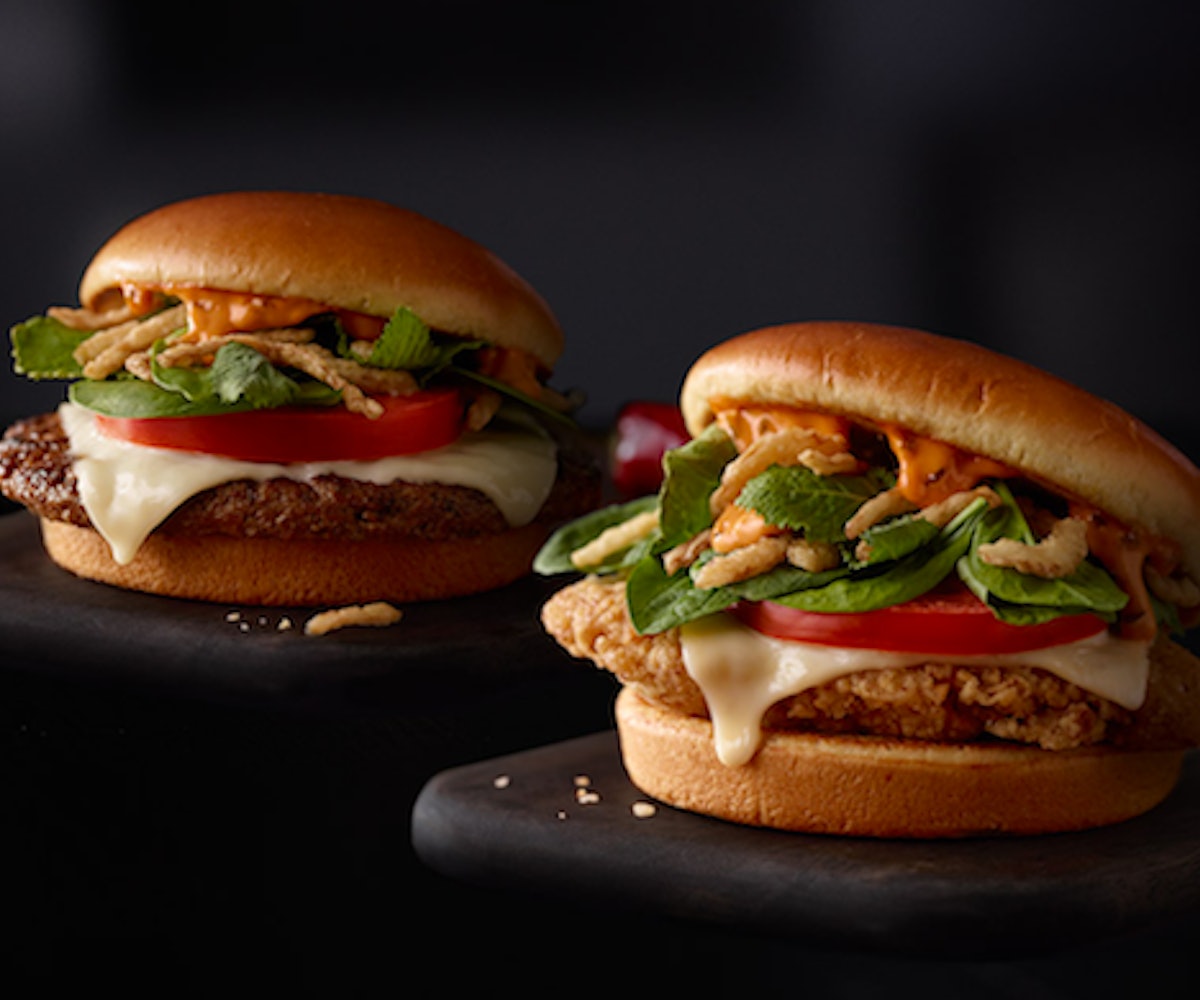 + After long last, McDonald's has finally launched its Signature Sriracha burger. And, because you can't get too many trendy foods at once, this spicy new sandwich will come topped with kale and baby spinach, because why not? According to the brand's website, the burger will also have crispy onions and tomato, and you can get it with a quarter-pound beef patty, buttermilk crispy chicken, or grilled chicken. More of a chicken nuggets person? Never fear, the Sriracha Mac sauce is also available as a dipping sauce, so your fries and nuggets can get in on the action, too. Are you lovin' it?

+ Walt Disney Studios just released a "motion poster" for the new Mary Poppins Returns movie. What's a motion poster? Basically just a short gif. In this case, Emily Blunt stars as the famous nanny slowly lifting up her umbrella to reveal a coy smile and an ensemble that reads a little "Carmen Sandiego," but we digress. No doubt this will also look cool on digital ad screens and certainly makes us more pumped for the film, which drops December 2018. At D23, Blunt said of the character, "The idea of this magical, mysterious person whisking into their lives and making everything right again, was really comforting. Children respond to the lack of sentimentality that he has. She's rude, and eccentric and odd." Note to Disney: Please give us a Lin Manuel Miranda-as-Lamplighter Jack motion poster soon?

+ Sorry, Hulk fans: Mark Ruffalo just went on record saying that there will never be a standalone movie for everyone's favorite mean, green superhero. In a red carpet interview with Variety that followed the D23 debut trailer for Avengers: Infinity War, the actor said in no uncertain terms, "I want to just make one thing perfectly clear today: A standalone Hulk movie will never happen. Universal has the rights, and for some reason, they don’t know how to play well with Marvel. And they don’t want to make money." The actor said he's been in talks about it but just "doesn't see it in the cards." Ruffalo also says he has "two or three more years left before I'm too old to play The Hulk," which also doesn't necessarily bode well, either. Hulk sad.

+ Senate Majority Leader Mitch McConnell has decided to postpone a vote on the new health care bill until after John McCain recovers from emergency surgery. The 80-year-old senator announced on Saturday night that he'd be undergoing surgery to remove a blood clot from above his left eye, and will be in Arizona recovering through next week. McConnell hoped to have a vote on the embattled bill on Tuesday but is already facing enough opposition within his own party to severely jeopardize not only its passing but also its ability to even get to the floor. Senators Susan Collins (R-ME) and Rand Paul (R-KY) have already said that they would block the bill, and without McCain the bill is dead on arrival. Several other Republican senators are also wavering over consenting to a motion to proceed, further showing that the health care bill is on life support—and just barely.

+ This isn't just fantasy: A Queen biopic is finally happening, with "Mr. Robot" star Rami Malek set to play Freddy Mercury. The news comes straight from the band's website, and the excitement is palpable. The film has been in the making for nearly a decade now, with actor Sacha Baron Cohen originally floated to play the famous singer and showman. Queen bandmates (and the film's executive music producers) Roger Taylor and Brian May say of Malek, "Rami has great presence and he’s utterly dedicated to the project. He’s completely  living and breathing Freddie already, which is wonderful.” The biopic is set to begin pre-production as early as next week, with principal photography starting in London as early as mid-September.

If your summer sunnies are looking a little worse for wear, or if you just want a new pair to add to the collection, Rebecca Taylor has some cute new frames for you. The brand teamed up with designer sunglass brand Sunday Somewhere to create four super-cute frames in a range of pink hues, plus a stately tortoiseshell pair. The sunnies were just released this weekend, so snatch them up in stores and online before they're gone.

If all men were suddenly okay with crying, 70 percent of our problems would disappear. – Kumail Nanjiani