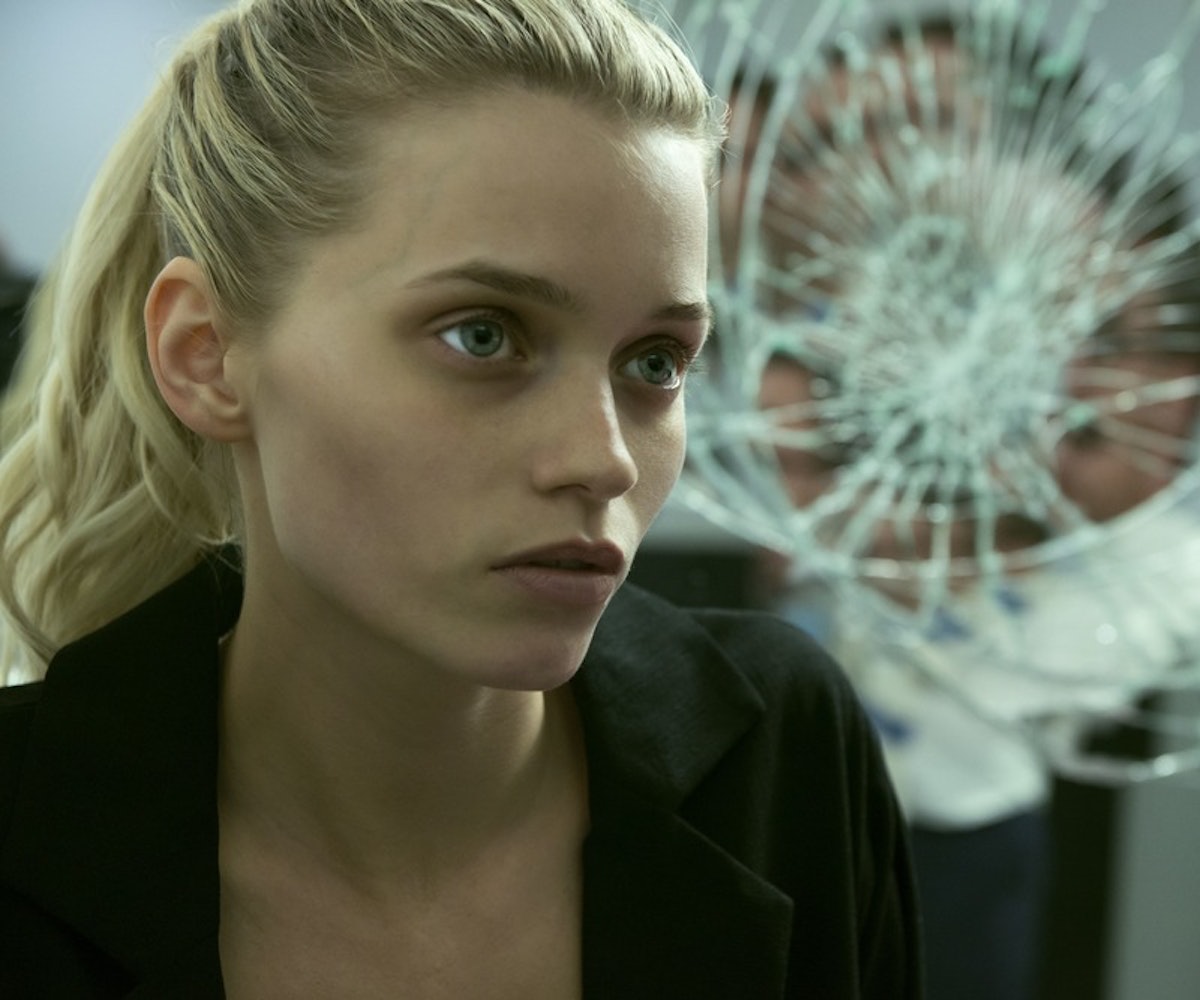 It's not abnormal for a model—especially one that has earned the "super" precursor—to make the transition to film. While it certainly helps to have a big name and a pretty face on the silver screen, it doesn't always accelerate the nature of storytelling and the acting could eventually fall flat. Abbey Lee is certainly not one of those run-of-the-mill model-turned-actresses.

Today, her new project, Nicolas Winding Refn's neo-noir psychological thriller The Neon Demon, hits theaters. In it, Lee plays Sarah, a self-loathing, washed-up model obsessed with reclaiming the fame she once held. It's her that helps the film fully realize the warped nature of beauty and the desperate attempts that people will go to achieve it.

Ahead, we speak to Lee about the film's intention and the menacing nature of humankind's obsession with beauty.

There are so many elements at work in The Neon Demon. What was it that drew you to the film?

It had a lot to do with the fact that it was Nic Refn. It also had to do with my character, Sarah. When I read the script, I was thinking, "Do any of the characters ring interesting or true, or seem like who I want to go for?" I was offered to have a look at both Gigi and Sarah, and I said, "Sarah’s the only one I want." I’m trying to change industries and have people take me seriously as an actress rather than look at me as a model who’s trying to act, and to consider a role where I play a model could have been career suicide. It was quite a big risk.

Did being near Hollywood factor into how you took on the role?

I’ve been around that since I was sixteen. It wouldn’t have made a difference if we’d shot it in Africa; I would have understood what it was about. It definitely supported the energy on set. The film, the story, and the character was already in me; I didn’t have to worry about where we were.

What kind of a person is Sarah?

Sarah is a very volatile human being who is vulnerable. There's also a slight violence to her. It’s sad; she has a difficult time with self-love. She's come to a place in her life where she’s been so blinded. A lot of the original script and the backstory is that Sarah was once in Jesse's position, but she made some bad choices and ended up washed up. She’s jaded, desperate, lonely, and confused. She’s a bit of a mess.

After she consumes Jesse, do you think she finds some temporary form of self-love?

What happens with Sarah at the end is the essence of the film’s message: Beauty has power, and beauty reigns. She eats the eyeball, and all of a sudden she becomes the sun. She reaches the eternal place where Jesse was, and where she wants to be. Yes, Sarah gets what she wants in the end.

What do you think it is about Sarah that makes her able to be okay with her decision in the end, whereas Gigi is unable to handle it?

Sarah’s desire for Jesse's "thing" is embedded in what she feels she needs to be happy. Gigi is much more surface level; Gigi’s the one with the plastic surgery, and she wants to attain Jesse's "thing" to look a certain way. Sarah wants it because she believes it will make her feel better. That’s why she’s willing to go extra lengths to get it.

What do you think the movie signifies in the digital age?

The lengths people go to, to attain beauty, is getting atrociously out of control, but I think it’s always existed. What it symbolizes, in relation to what’s happening now, is that it’s getting crazy. It’s not necessarily how these girls are trying to get beauty, but it resonates true to the lengths people are going to. I wouldn’t be surprised if, in 20 years, people start trying to eat [other] people.

What makes beauty so dangerous to people?

It’s subjective—that's what's dangerous. It’s a thing people put so much focus on, but it’s not the thing that matters in the end. It's kind of like when you’re trying to decide what to wear to a party. I remember being young and stressing over it so much, and now that I’m older, I’m like, "No one’s going to fucking remember what I wore last night." When you die, does it really matter how beautiful you were, how skinny you were, how tan you were, how big your boobs were? Or does it matter how you affected people? What you gave, who you loved—those things matter a lot more.

Do you think that this movie and its themes are relevant to people who aren’t trying to achieve some kind of fame?

Yeah. Regardless of what people want in their lives, I think that everyone at some point feels the pressure of beauty and perfection. There are some incredibly self-assured people who don’t focus on that, but I know the majority of people hold onto it in their life.

The movie was shot in chronological order, which is atypical in the film industry. As the movie progressed, were there any realizations you came to?

The more we shot, the sadder Sarah got. She was supposed to be bitchy, nasty, violent, hardcore, and intense—really rough and tough. But she’s really vulnerable, too, and I don’t think I realized that until we started shooting. Other revelations happened every day on that set because Nic changed the movie every day. You had no idea what you were gonna get when you wrapped on set. You were finding who your character was and who she wasn’t every minute.

How has exploring your creativity help you discover your identity?

When I walk down the street and see a cute boy or girl, all of a sudden, I get this romantic love story in my head of how me and that person fall in love. Then, I’ll pass a truck, and all of a sudden in my head, it hits a pedestrian—all of this crazy shit. I’m daydreaming constantly. I always did that as a kid. I wasn’t someone who had Barbie dolls; I was always in a tree, talking to things that weren’t there, and digging holes to try and get to China. Acting fully makes me realize that the person in my head is who I am as a creative person. When I act, that’s the tool I need to use in my brain. All the creating I’ve done has made me realize that the kid being with the fairies—that’s who I am.

What do you hope viewers take away from this film?

I hope it penetrates them on an emotional level, and that they can familiarize themselves with something in the film. I hope that they can feel understood. A lot of people think the fashion industry is filled with beautiful girls who are confident, but they have even worse self-esteems. It takes the idea of wanting to be perfect and beautiful to a level that’s sickening. I think that’s what’s happening, so I hope people think about that for a minute and can see the comparison.