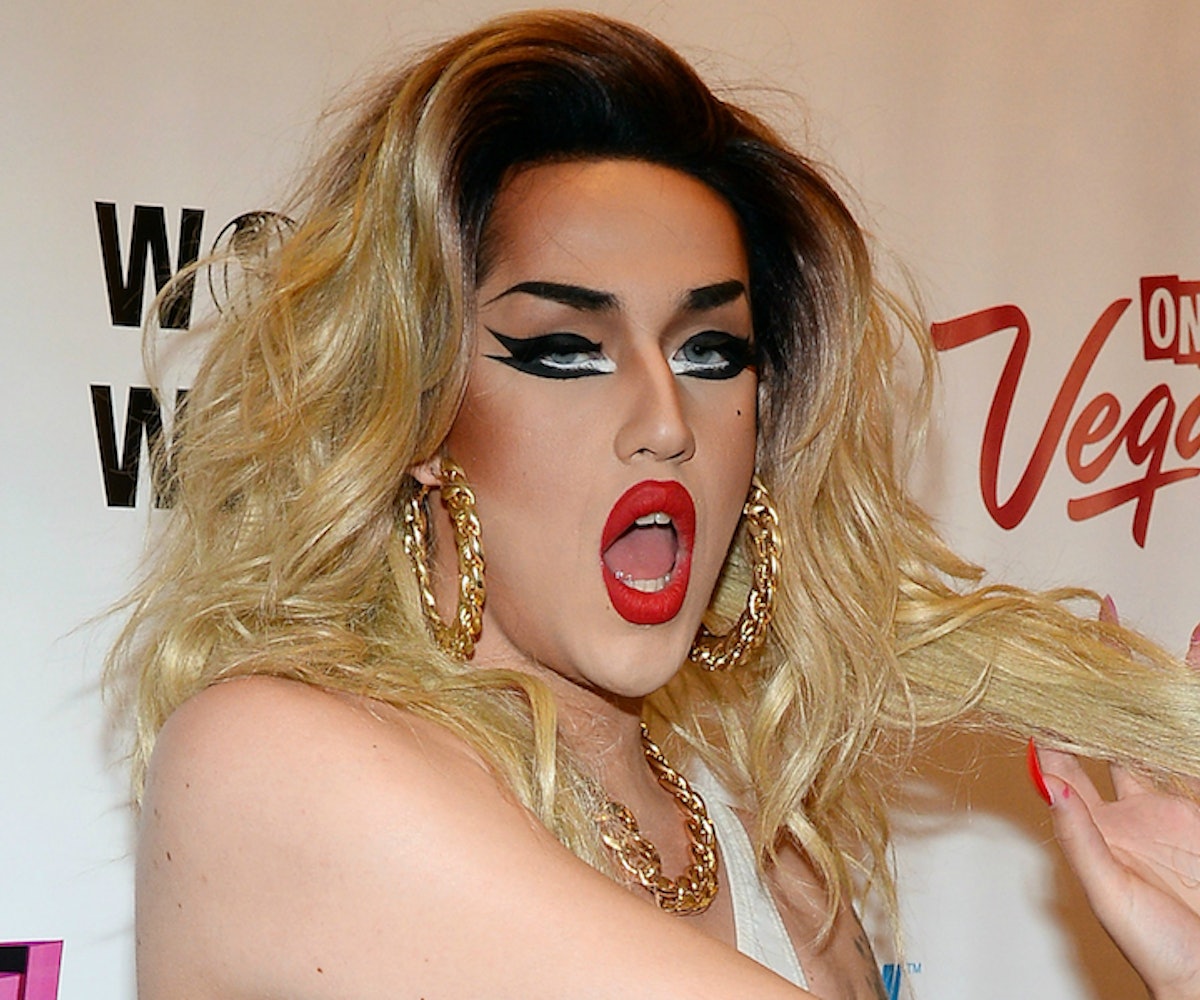 You might remember Danny Noriega from Season 7 of American Idol—*cue Randy’s “Yo, dawg,” Paula's clapping, and Simon’s occasional blank staring. But that was a decade ago, and Noriega more recently headlined as RuPaul’s Drag Race’s self-declared “Wild Child” Adore Delano and is currently, can we say, slaying? Or winning?

Delano scored a top three spot on Season 6 of the "Olympics of Drag." And riding off that hype, they left the drama of reality TV and entered into their own pop-punk dimension, releasing three albums in the past four years and touring across the U.K. and Australia, to name just a few feats. Added to a social following of 1.6 million on Instagram, one might conclude that, yes, Adore Delano is definitely slaying. Winning. Whatever you want to call it.

Check out our interview with Delano, below.

I was on your YouTube and saw that somebody commented on your video for "27 Club," saying something like, "Nirvana" or "Kurt Cobain vibes," basically asserting you kind of invented drag rock. What are your thoughts about that?

Drag rock's been happening since before the '60s. Now, it's just like the gay community's picking up on it. I mean, look at David Bowie, look at Manson, look at Cher—they're all drag queens. But in the sense of the genre, then yeah, I'm probably one of the only girls that are doing that fully head-on.

So, American Idol versus Drag Race—how different do you think it would've been for you if Idol worked out for you? Why do you think this is the time your music is really gaining the audience it deserves?

We're in different times. You have to remember that that was like 10 years ago when that was on TV. It was led by FOX, so, I mean, on top of that, if it would've worked out, that would've been horrible for me. Because the time that I would come out, I would've been super-depressed and just kind of told what to do. [And], Drag Race is fucking revolutionary, man. It's making kids think, it's putting us in people's living rooms and opening people's brains.

Your third album, Whatever, is much more rock- than pop-centered, different from your first two albums. Is that where your music is headed?

Yeah. At the time, essentially, I was very angry at everyone. I was finding out so much information that I wasn't aware of, due to the lack of perspective and exhaustion. So I just put all of that gritty teenage angst that I tapped into from when I was younger, and I just threw it out there. I was in a super-inspired environment, as well. It was definitely a product of that—I was in Seattle for that whole year, so I was really living my Kurt [Cobain] fantasy. Yeah, it's just time and place, and just matter and energy. It was super, super authentic—we recorded the entire album in a garage in Arizona in the summer. It just came authentically and it flowed.

It's always different. Sometimes I wake up and bust a Lady Gaga one out, and do the whole... Like, if I feel melodies coming to mind, I'll record it on my phone. I mean, I can be anywhere and come up with something. Like, last night, I wrote an entire song on an airplane on my phone. Like, listening to different sounds and old songs from Manson and P!NK, and just tapping into my younger self. I wrote an entire song in literally an hour. Like, super-cute.

I know you love Amy Winehouse. Is she one of your inspirations?

Yeah, I think anybody that loves soul and smooth music in or around my age appreciates Amy for what she was. We weren't deserving of her talent, we weren't deserving of her era. She was born in a different time, I think, and it was apparent when people just weren't getting where she was coming from. There are a few artists that come like that, like every 20 years. And she was definitely one of those gems, I think alongside Lady Gaga.

She's not from this world.

She understands what it is to be a pop star and how to reinvent yourself, and she knows when to do it exactly just enough. She's like, "Okay, now I'm a movie star." And, she's gonna win a fucking Oscar for A Star Is Born, watch.

What was the transition process from Drag Race to a music career like? You've released three albums in four years!

It's nuts! I mean, American Idol was way different, because it just happened really quick and ended really quick. With Drag Race, it just keeps getting bigger and bigger. It's becoming this phenomenon in pop culture now with the kids. It's just that because it's more of a cult following, so you kind of have a lasting career if you're nice to people. But, yeah, don't be a dick, you know?

How does it feel to have an audience of fans that are so captivated by your work?

I think if it's genuine, the audience will receive it for what it is. I'm super-honest with a lot of my supporters, I tell them a lot about my life, and I think they appreciate the realness, and they appreciate when people listen back, and when discussions are discussed. Like, I don't judge in my social media communities because it's like, we're all here to learn online, that's why you have knowledge at your fingertips. It's up to you to shut up and listen when it's your time. But I think they love that whole community vibe.

What do you think the drag music scene is right now? So many queens have released singles and albums. It's really becoming more common.

I think it's awesome. I think it's a bit saturated. I use Laganja [Estranja] and Gia [Gunn] as an example of like... you don't always have to be a musician. You can also find your strength and nourish that. Laganja is the perfect example. She's on So You Think You Can Dance, she has her dance studio and her dance classes. It works so gorgeous for her. But, yeah, bitches like Aja and Shea and Blair, all have really good music. But, not everybody's a singer, you know what I mean?

What's your advice for someone who would want to do drag and music together? Seeing people like you, or Ada Vox from this past American Idol season, what would you say to someone who was like, "Oh my god, this is me."

Just grab all your inspirations and apply them to yourself. Because uniqueness stands out and it's like, jeepers creepers, you can smell fear. Like, the bitches can see that on stage. Be yourself!

Was there ever any predominant struggle after Drag Race, making that first step into music?

Yeah, I mean, I'm a beast in the studio. My first record, I finished recording in like two days. The second was three days. I go HAM, but I think that third record I did in one day. I love writing, I love being in the studio. I'm super-anal about my vocals, though, but it's fun for me. It was a bit of a struggle to get recognition, and it still is, with the mainstream target. Like I said, I think we're doing really good in the music industry right now, but no one in our community is the next Dua Lipa right now. The only thing that's closest to it is, like, Pabllo [Vittar], who I fucking adore.

Where do you draw inspiration from?

I really think you can hear it, especially in my last record. I have many musical influencers who have influenced me in my writing technique, as well. I like to pay attention to certain ways that they're an artist, how they do their punch lines differently and how their melodies kind of intertwine with that. I definitely draw inspiration from Manson and Nirvana... or The Beatles, there's little things that I try to pick up on.

What has traveling and experiencing life all around the globe contributed to you as an artist?

The people in the U.K. appreciate the music more, for sure. It's opened my eyes. You get to see different cultures, and even if it's a similar culture to yours, it's still a culture shock because they do things differently. They appreciate things different from us, so it's definitely opened my brain. And, kind of opened conversation [with] my family about certain things that we're ignorant of here. I think I tapped into their attention now that I am knowledgeable in it. It just helps me see beauty in a more broad spectrum, and that alone is rich to an artist.

On Drag Race, you were someone who really stuck to who you were, kind of not giving a shit what people thought. Was that important to you then, and now?

For sure. I knew what I was getting myself into on the show. Like, glamour, certain silhouettes, you gotta be a "glamazon" with the hair, and I did that as much as I could. Like I said, toward the end, I felt all glamoured out. I was like, "You know what, I'm just gonna do what I used to do from the beginning and see if it works." And, it has. The audience has been super-receptive toward it. I can't be more blessed than that. I guess I tried to follow the rules on the show but still try to maintain who I was.

With your music, is there any message you try to convey?

With this last album, I touched a lot on gender identity because a lot of my supporters and my meet-and-greets are trans youth. I wanted to kinda touch on that, let them know that they're valid and everything that they've grown up thinking about gender is a lie. I think it would be neat if I was their age and I had somebody singing about that in lashes.

For your future plans, regarding music or anything, is there a type of vibe you're going for, or are you just letting everything happen?

I think right now, where the wind is blowing me, I feel like I'm going to be blending both the [pop and rock genres] together, and just seeing how that merges. The way my writing's going is super in that direction, which I'm excited about. I do like making pop music, as well.

Where do you see yourself, as this punk-pop/rock/drag queen, in years to come?

I see myself, ultimately, as an entrepreneur artist that is still making songs. Not necessarily albums, I'm not sure what my next album is gonna be. But, I'm gonna be dropping some bombs—like, I can't not do that. I really wanna come out with my own shit.