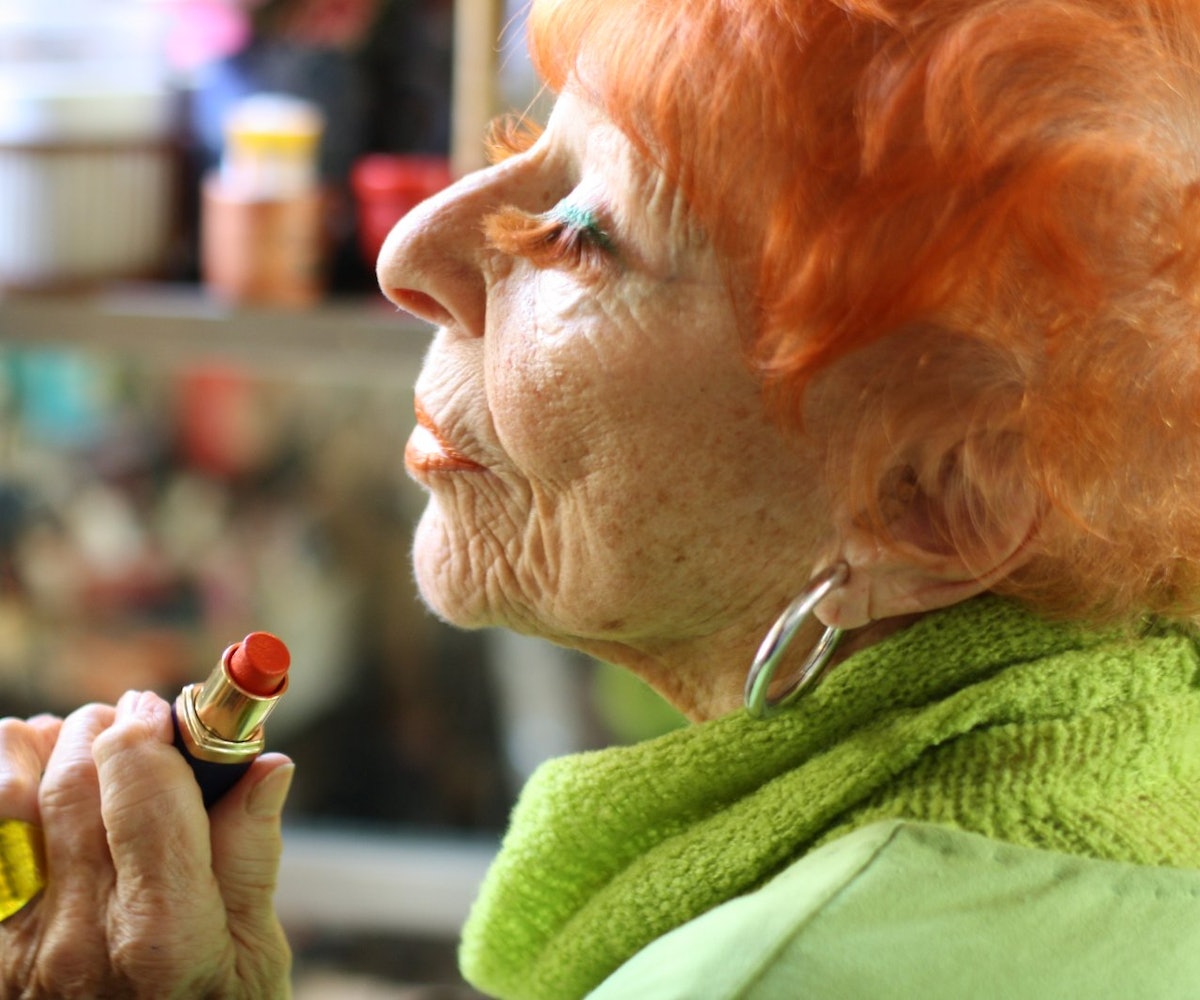 If you find yourself susceptible to inconsolable birthday panic attacks and "40 is the new 30" or "30 is the new 13" articles, you clearly have never heard of or seen Advanced Style.

In what started as a blog portraiting New York's stylish (excuse us) older women, Advanced Style has become a movement of sorts, with a book and YouTube mini series. With each snap and clip, the blog's founder, Ari Seth Cohen, has altered the misconceptions of aging, showing that much like wrinkles, an awesome personality and a kickass sense of style never fades.

Now, Cohen and filmmaker, longtime collaborator, and NYLON alumn Lina Plioplyte are bringing Advanced Style to the silver screen. The documentary follows seven amazing Advanced Style fixtures—Zelda Kaplan, Ilona Royce Smithkin, Lynn Dell, Tziporah Salamon. Debra Rapoport, Joyce Carpati and Jacquie Tajah Murdock—over the course of two years. You'll gain some worthwhile wisdom, sentimental observations, and, of course, some styling tips along the way. (I don't say this often, but this movie is definitely a must watch.) Here, I interview the two to find out more about Advanced Style.

I loved the movie! It is so well done, and I thought that the women’s personalities came through really well. I was just wondering how you guys positioned it -- What tactics did you use to make sure that each woman really came across as themselves?

Ari: That was Lina. That was a huge challenge. There are so many women on the blog and there are 14 women who we filmed. I’ll let Lina take this one, but it was very important for her to have people see them how she sees them.

Lina: The older generation is not so used to cameras and iPhones and filming one another as we are. I think it’s much more organic these days, and so lots of them would perform in front of the camera and I wanted that intimate feel, so it’s just me and them telling their real life stories. Not like "hey, ho!" So it took a moment to gain their trust and that’s where we were, with boom mics and it was me saying, “How are we doing with sound?” We had to just be like flies on the wall, and have them do their thing. It was important because otherwise we wouldn’t have the portraits like we do have, as they really are. Just getting real life — which is always not always the most pretty. There is pain and there is competition sometimes and there is bitchiness when it needs to happen. They’re real people. They’re not like, “Oh, age is just fantastic!” So it was really important to spend that time with them, in their homes for long periods of time to get the reality on camera.

Ari: But also through the editing process of looking at them, we chose these seven in particular because they each had a unique perspective, and we wanted to tell a different story. What Lina didn’t mention is she wanted people to take away the same feeling that she had hanging out with these women. I think that was very successful in the film because you do see them and you want to aspire to be like them or you want to be their friends or whatever it is, and that was done through finding the moments that really allowed the women to be themselves and so it’s a balancing act. It’s a process of editing and deciding.

How long was the filming process?

Lina: Two years. It took us about two years.

Ari: We started working together, right when I started my blog, or the year after, making vignettes of the women. And we used some of that footage in the film but the actual filming was like, “Oh now we’re making a film because these YouTube videos are getting some interest. We know we have something here.”

Ari: We had a Kickstarter. And that’s a problem with making a film — we got the minimal amount of money that you need to make a film, as far as the music budget and the timing budget. It went from YouTube to Nowness taking it seriously, to Kickstarter, to dadadadada.

Lina: To where we are now!

So when the film opens up, it starts with you [Ari] roaming the streets, looking for subjects, kind of checking out what different women are wearing. So what exactly is it that propels you to stop?

Ari: I mean, it’s kind of whatever happens in the moment. Sometimes people pass me by who I thought I should have stopped and then I regret it later. And then there are some people who I know that I just have to ask if I can take their photo and I think it’s anything from the way they might be walking or the way they’re standing or there’s some kind of energy they’re exuding to the world, so that can be through their style and eccentricity or elegance or glamour.

Lina: I’ve seen him just turn around, like just going and walking and he turns around and there is a beautiful leopard bow and grey hair.

Ari: Yeah, so it’s just something that I find interesting or beautiful, but I know also will make a good photograph and will inspire the readers of my blog. I was just in Washington in Port Townsend at this film festival near Seattle, and there was a woman with grey dreadlocks, and that’s what struck me then. It’s just always something different.

So there’s also that hilarious moment in the beginning where you stop a woman and you compliment her and she kind of just ignores you to talk to her friend. Are there a lot of awkward moments when you’re approaching people?

Ari: Not always awkward, but it’s always something different from people telling me no. I still remember those women who told me no who I know would have been perfect pages on the book. Not necessarily awkward, but in that situation I really thought the woman would have made a great photo, and so she was polite and I thought that I could potentially wait it out. And Joyce, who’s in the film actually, when I met her I saw her from afar and she went into a store. And I stood outside the store for like five minutes just checking the store to see if she was still there. Even if this sounds kind of stalker-y. (Laughs) And then she came out. So there are certain people I know are worth the wait, even if it’s kind of awkward.

Lina: But there’s nothing stalkerish about your approach and admiration. Maybe if it was just this straight guy with different power and a different approach, but you’re approaching them in just a different style of admiration.

How did your relationship with these women in the film progress from just stopping them on the street to the end?

Ari: It started with Deborah. Basically, from Day 1, the whole idea was that I wanted to approach New York through…my grandmother kind of guided this whole project. She passed away, but I know that it’s because of her that I started doing this. I started taking pictures of these women because they were women who I admired from afar or whatever it was, so I always wanted it to be about more than just fashion. One of the women in the film, Deborah — I was working at the New Museum downtown and she was there. I asked if I could take her photograph, but I only had an iPhone and she said, “Well, come over to my house. I’ll dress, I’ll undress, and I’ll make you lunch.” Anyways, I was intimidated because I thought, “I can’t go to this woman’s house. How am I going to take photos? How’s this going to work?” But I trusted her and I went over to her house and we really developed a friendship and from there it gave me the courage to start becoming better friends with other women who I had photographed. Then I introduced them to Lina. That’s part of the process of the film, that she got to know them, and then we got deeper into making the film. But really if I were to just make a film, it would have been biased because I would have just painted these beautiful portraits of fabulous women.

Lina: Well you know Deborah, when her boyfriend calls her a clown, he was calling her a clown. There are people who think, “Jesus fucking Christ, Halloween was like two months ago. So these opinions that were not necessarily in favor of these women or showed a different side, are very important for me to show. And at the end of the day they’re moving in together now. Happy ending.

How do you guys hope that this film will resonate with younger audiences?

Lina: I think that younger doesn’t mean a different kind of audience. This film was never an old people’s movie because it’s about our perspective watching these fantastic women running around the city as it is today — not looking at their youth, but them being here, listening to Lady Gaga in the taxi while on the way to some textile exhibition. This is today. So I’m not surprised that young people respond to it really as much as older generations respond to it, which is fun and inspiring and if it make you look at age a tiny bit differently, then it’s a fantastic job done.

Ari: Hopefully the really emotional response would be that younger people pay more attention to older people, whether it’s their grandmothers or their great aunts or just a woman on the street who inspires them. And also Lina and I and all my young friends who are younger than me, like I was at this film festival and this girl said, “You know, it’s not only older people who love these women.” Because I think they see the freedom and the boldness. I guess that we should all take away the fact that we should live each moment, we should do the best we can to enjoy life, but also that there’s a full life ahead of us. We are going to get old, and at 80-years-old we can still have new things to look forward to.

Ari: Until the old lady sings.

Lina: That’s not how it goes.

Advanced Style opens today. Find it at a theater near you.