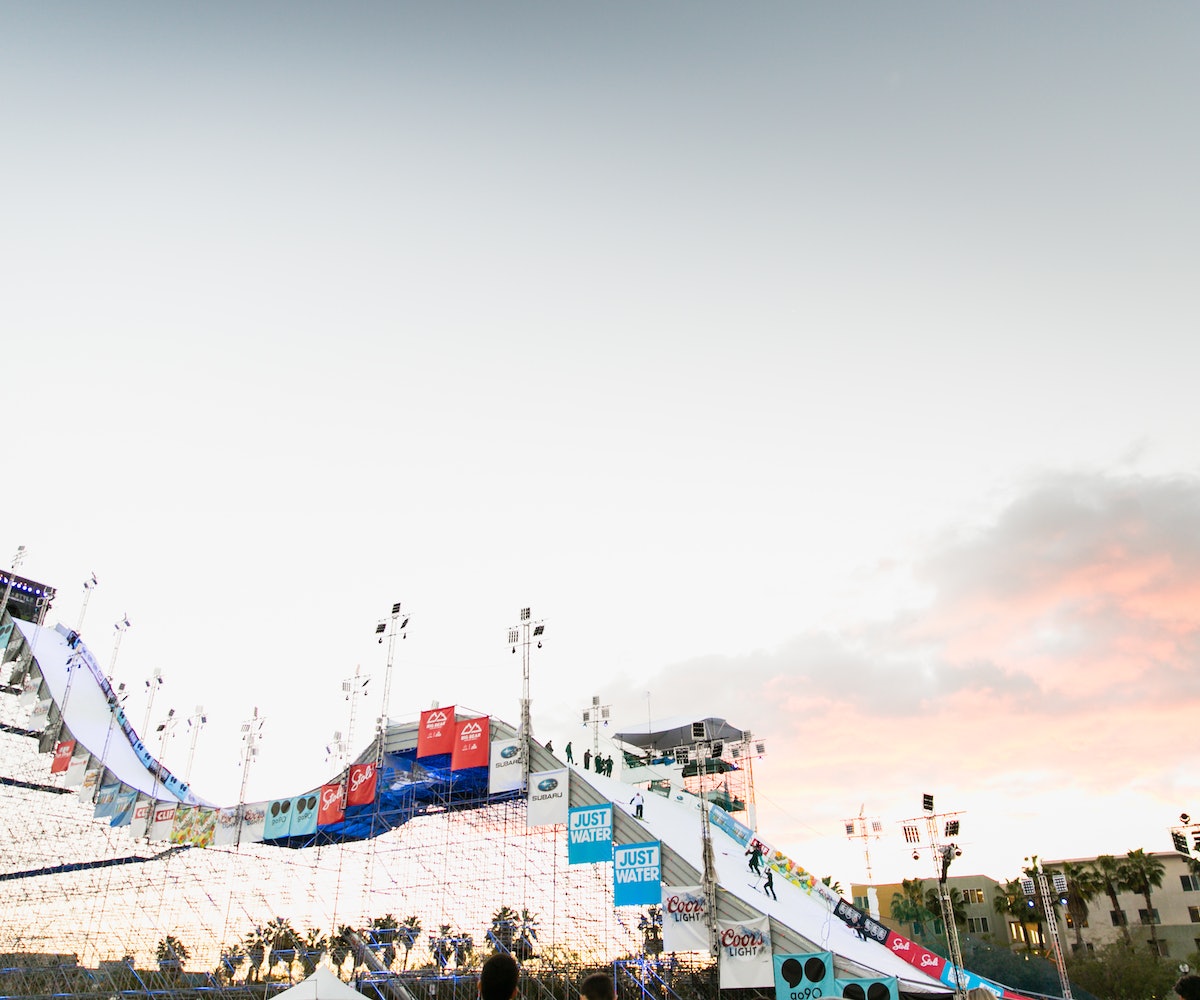 Music festivals are one gigantic party. Their magic lies in their ephemerality: They pop up for a weekend only to disappear, leaving behind memories and a hankering for the next round. (After some much-needed rest, of course.)

When you think of festivals, you think of the music, the art, the food, the street style, and the other attendees. What you don't necessarily consider is the mass of people and minds that go into executing the whole darn thing. You shouldn't, really, because like good design, a festival's BTS crew goes unnoticed. The escapism a festival provides is paramount and ensuring it all goes off without a hitch or commotion is key. All of that requires brilliant, agile minds. And the minds behind Los Angeles' Air + Style festival are some of the most brilliant and agile because setting up a 16-story snowboard jump complete with snow in the middle of downtown Los Angeles is a feat in and of itself. To make it seem totally normal alongside acts like Major Lazer and POWERS is astonishing. Yet, Air + Style's team, which is led by a sizable number of women, did it.

Oh, you thought it was men running things, huh? Well, that is so not the case. As it turns out, women are making festivals happen all the time, with more opportunities opening up all the time. Sound like something you'd like to be a part of? I spoke with a handful of the minds that made Air + Style L.A. the success it is to get their stories and, hopefully, inspire more girls to join the fun. Who run the world, right?

At the age of 15, Emily Ockenden entered the music industry. From the production side, she worked her way up from being an intern in her home country of Australia to starting her own freelance company in 2015 in Los Angeles. "I asked around until I found myself a nighttime job in the music industry and went from there," she says of her past balancing a full-time athletic career with a passion for music. "You have to be willing to hear the word no and not get upset when you do hear it," she says. "Expect to be shut down multiple times before you get the yes you’re looking for." For her, it's all about perseverance. "Just do it," she says. "It’s not a man’s world like you think it is—especially in America. Be prepared to start from the bottom and be prepared to get dirty and keep asking. That’s what I did until someone said yes."

After a stint as the public relations director for ESPN X Games, Moses-Swope started her own PR company. "I started right out of college and it was a dream job and comfortable and I went to work every day loving it," she says. After years working that, she decided to hone in on her favorite aspects of the job: athlete relations. "That was my passion," she says, "so I made a niche for myself and took the leap." Moses-Swope balances the role of mother and career woman like a bona fide pro, finding validation in her career move within the athlete stories she hears firsthand. Even though her college degree is in Communications & Media, Moses-Swope worked her way up through hospitality to get to where she is today. "Be okay with working for free for awhile," she advises. "I did a lot of volunteering, a lot of interning, and a lot of grunt work." Her motto is: If you want something, go for it.

Teevan is a testament to the benefits of extracurricular activities. During her time at University of Southern California, Teevan helped produce everything from student orientation to an Elton John concert. Her theater background informed her decision to get more involved behind the scenes. "I get more from bringing music to people," she says. "I have such a respect for artists, so maybe in another life I'd be the music artist." For now, Teevan is killing it as one of Air + Style's most outspoken team members. "Sometimes, especially in entertainment, there’s a historical mentality of having to work your way up in order to speak up," she explains. "You never know what’s going to resonate with someone, so say something." That's easier said than done, but Teevan will be the first to tell you how rewarding it is. "The challenge is believing that you’re capable and you are enough to do this." For her, every experience is worth [the] time. "Walk in ready to work and ready to learn. People will notice you and elevate you to someplace where you’re happy.

Chiong fell into her career. "My first job was at Coachella, checking people in for the VIP Safari Tent," she says. "I was very lucky, as many are in this industry, where my cousin was tattooing one of the Coachella founders and told him I was interested in doing music industry stuff." The rest, as many would say, is history. But Chiong's personality is truly captivating; almost immediately upon meeting her, you know she means business and will get whatever job thrown her way done. "I’ve always loved music (singing, writing, playing, dance acts)," she says. "The industry wasn’t a goal until it happened and I realized that this is where I belong." For her, one day is a week and a week is a month, which is really to say, the community of BTS crews she's met jive so well together, time feels both infinite and standstill. "If people see you're determined and eager to do what you're doing," she says, "they'll call you back."

Meg Dieter, owner of Black Widow Group, the company that helped put the festival together

"I don't know how to describe my role here," Dieter says. "I've been doing production since I was in my early twenties. I've done everything from being a production assistant to being a runner to being an admin person." You could say Dieter has done it all. This career wasn't her dream career back in the day, during the time of Woodstock '99, though, which she considers to be a turning point in her life. "I saw the festival happen and I said, 'This is what I want to do.' So I didn't give up from that point on." For Dieter, the satisfaction of standing on stage and seeing the crowd completely lose themselves is among her driving forces. "It's the end product in getting our guests to be happy that makes me happy." Her best piece of advice is to maintain a sense of curiosity. "There is always someone who wants to take your job," she says. "So, keep asking questions. Keep getting better and never give up."

Krystal Bee is killing the game. She took her radio skills to Air + Style to play host for the festival's athlete interviews and other video content. "I've been on social since the damn near MySpace days when I wasn't supposed to be on MySpace," she says of her humble beginnings. She went to college for radio and immediately began interning at her college's radio station. "I'm the only female and I've always been the only female," she says of her radio gig, "so being in a room full of all boys when I'm the only girl can get very one sided. But it's fun! I've learned how to hold my own in that room." When asked what she would tell a girl looking to be her one day, Bee stresses the importance of not giving up. "It's going to be competitive and people might not think that you can do it and you might not think that you can do it but you can, even if you have to be an intern for over a year, never get paid." Her motto? "Put in the work." Basically, just do it.

For the first time in Air + Style L.A.'s history, the production crew brought on student workers to expose them to what really goes on behind the scenes of this giant celebratory event. Five young women, from all walks of life, were chosen to participate in the program after submitting essays, letters of recommendation, and a general application. "It’s been such an empowering process to see young kids who really have a passion for the various parts of the festival production," Fred Ealey, who helped organize the program, says. "We wanted to show them the opportunities that are available to them.

Indeed, it's that kind of exposure that thrills the group of student workers. "This basically allowed me to see the bigger picture and take what I do on a small scale and how I can apply it to the professional world," Minerva Joseph says. Getting exclusive backstage access is not an experience to take for granted. Sydney Lawler, a psych major, says she's found a new perspective and goal in life because of the program. "This isn’t exactly where I thought my path would take me, but I see an opportunity here that I didn’t before." Suddenly, the ephemeral quality of life seems to make more sense. "You can mess up a tiny thing," Joseph says," but there's more to life than that."