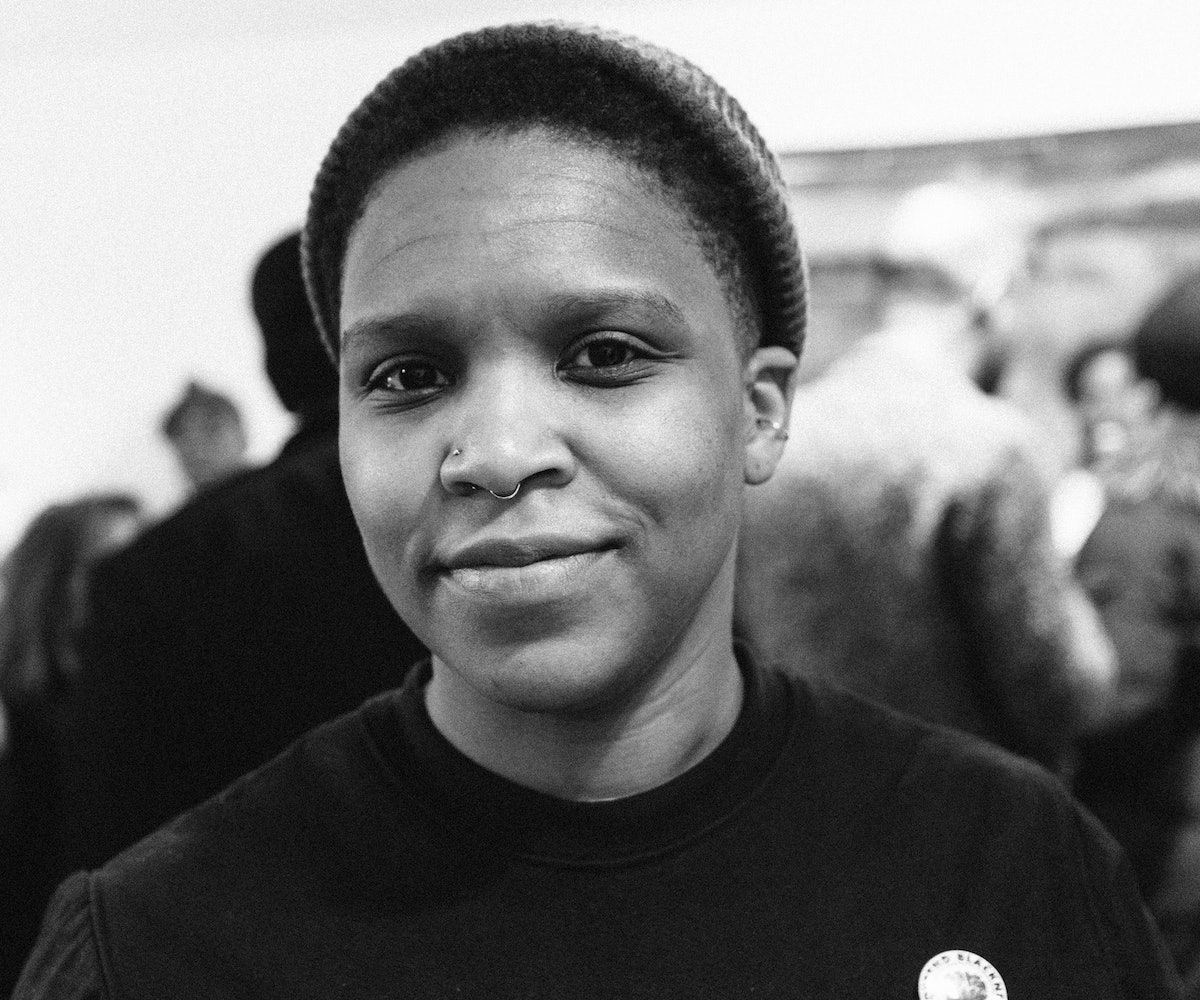 Photo by Darryl Richardson, courtesy of We Buy Gold.
by Taylor Bryant
April 6, 2017

There are a lot of eyes on the media right now. With Trump’s "fake news" agenda and vitriol toward outlets like the New York Times and the Washington Post, and pretty much anyone with something negative to say about his family or administration, a war on the press has been waged.

But it isn't only Trump and his ilk who are battling the press. Artist and journalism school graduate Alexandra Bell is starting a different kind of fight, one in which she's holding up a mirror to the media in the hopes of encouraging a more perfect fourth estate.

Bell graduated from Columbia’s esteemed journalism school in 2013. There, she was required to read multiple newspapers a day to get a feel of how different outlets approached different stories. It was in J-School that she started looking at the news through a microscope. “I started taking notes within the margins, and that's how I kept track of my views,” she tells us. “Sometimes, I’d write down things I didn't understand, sometimes I objected to approaches in reporting, and other times I didn't have many objections, but I was aware of the history of print media, and I could catch errors.”

One of the things she objected to was implicit racial bias. You know, like when protestors of color are referred to as a “thugs” or “criminals," but a white man accused of shooting and killing police officers is described as a “troubled loner”? It’s like what Malcolm X said in a 1964 speech: “This is the press, an irresponsible press. It will make the criminal look like he’s the victim and make the victim look like he’s the criminal. If you aren’t careful, the newspapers will have you hating the people who are being oppressed and loving the people who are doing the oppressing.”

“It's people following the rules, but still making the mistakes that I think perpetuate anti-blackness, xenophobia, and sexism,” Bell says. So, this past December, she decided to address the problem.

If you’ve traveled to the neighborhoods of Crown Heights or Bedford-Stuyvesant in Brooklyn, New York, you might have come across her first piece. If not, it’s worth seeking out. It shows what appear to be two New York Times articles placed side by side. On the left is a copy of an original story that ran on the front page of the newspaper, in which teenager Michael Brown, who was unarmed when he was shot more than six times by police officer Darren Wilson, was described as being “no angel." The story ran the day of Brown’s funeral, alongside a profile of Wilson. It is these two stories that have been almost completely crossed out by Bell. What remains reads: “Officer Darren Wilson fatally shot an unarmed black teenager named Michael Brown.”

But, it's the headline on Brown's revamped article on the right side that stands out. What once read, “A Teenager Grappling With Problems and Promise,” now says, “A Teenager With Promise,” with a picture of Brown in a cap and gown displayed underneath.

“I wanted to rework the framework, take the information that was put before me and find ways to restructure it to point those issues out,” Bell says of her work. “I wanted it to be very bare bones. We have an armed cop and an unarmed kid... let's really consider what you're saying when you put a black kid on the front page with a police officer. You give them equal billing. The cop article comes first. What are you saying? What are you saying about black kids? What kind of issues are you perpetuating?”

When discussing how the piece came about, she explains: “What's taking place when I work through any of the articles is that there's a process of arguing back with the content. Questioning why something was written a certain way, and then redoing it in a way that acknowledges those concerns.”

With a background in journalism, Bell could’ve easily written a story voicing her frustrations. But she found street art to be the best medium for her message. “I didn't think it would work as a paper, in a long-form essay. It felt, to me, like a visual project and it grew from something that I would put in a gallery to something I wanted to be a bit more confrontational. I'm really interested in moving some things offline. I'm not too trusting of the internet space for certain kinds of information.”

For now, you can only find the artwork in Brooklyn. Bell says she’s thought about posting it in more gentrified areas, but an incident that happened just the other day is causing pause. On one of the pieces placed in the Nostrand Avenue subway, someone crossed out “Teenager” and wrote “Thug” in its place. Underneath that, they wrote in “BS Drug Dealer.” Bell says she isn’t surprised by the defacing.

“I've been in New York 12 years. I'm from Chicago, a more historically segregated city,” she says. “I think some of the mixing in New York is superficial. People have to ride the trains together, they don’t have a choice in most cases.” A good samaritan has since erased the graffiti from the piece. Bell continues:

These areas are shifting, but it's the Northern racism. So it's this funny thing that, when we look at Trump, we see this bombastic, loud racist. But I think you can look at some papers and some media outlets that are probably more left as kind of Northern racism. They don't know better, they are racist as well. The way they frame stories sometimes, you have to ask yourself, Do you feel that way as well?

Despite how it might come across, Bell doesn’t have a vendetta against the outlets she's calling out. She’s merely holding them accountable. “People keep saying to me, ‘Oh, so fuck the media, huh?’ And, actually, no, I'm calling out readers, too. I think recent studies show that 60 percent of people admit to only reading headlines,” she says. “So, we have some work to do, too. It's not just 'F the media,' but I am making them more responsible.”

As they—well, we—should be. Yes, a lot of attention and pressure is being placed on the press right now, but issues with the press have existed as long as the press has been around. Even the stories Bell is choosing to call out are dated pre-Trump. "We're now in this age where people are oddly worried about fake news and things that have historically gone on for centuries. A lot of lynchings were the result of false news, so this isn't a new thing," she says. "I'm really interested in how those patterns are repeating in several ways… Yes, there’s a lot of attention, but do people know what to look for?”

Bell has at least two more pieces in the works. One addresses the Ryan Lochte controversy during the Olympics (see above), and the other tackles a hate crime in which a white man killed his Lebanese neighbor. She doesn’t intend for all of her work to focus on race, but that’s where her personal interest lies at the moment. Overall, she wants her art to force people to question everything and question it often.

“Some of the work that I'm doing is kind of saying, 'When you read this, think about this. When you look at this, think about this,'” she says. Sometimes, discrimination is present in between the lines. “I think we're all out here waiting for someone to say fag or waiting for someone to say the N-word, but without that being present, can you see it? When people are looking for racism, I feel like they're looking for shit like that. They're looking for something that's really caustic, and what I'm saying is sexism, xenophobia, it also includes everything you decide to give color to. I hope I can get people to slow down enough to recognize that.”