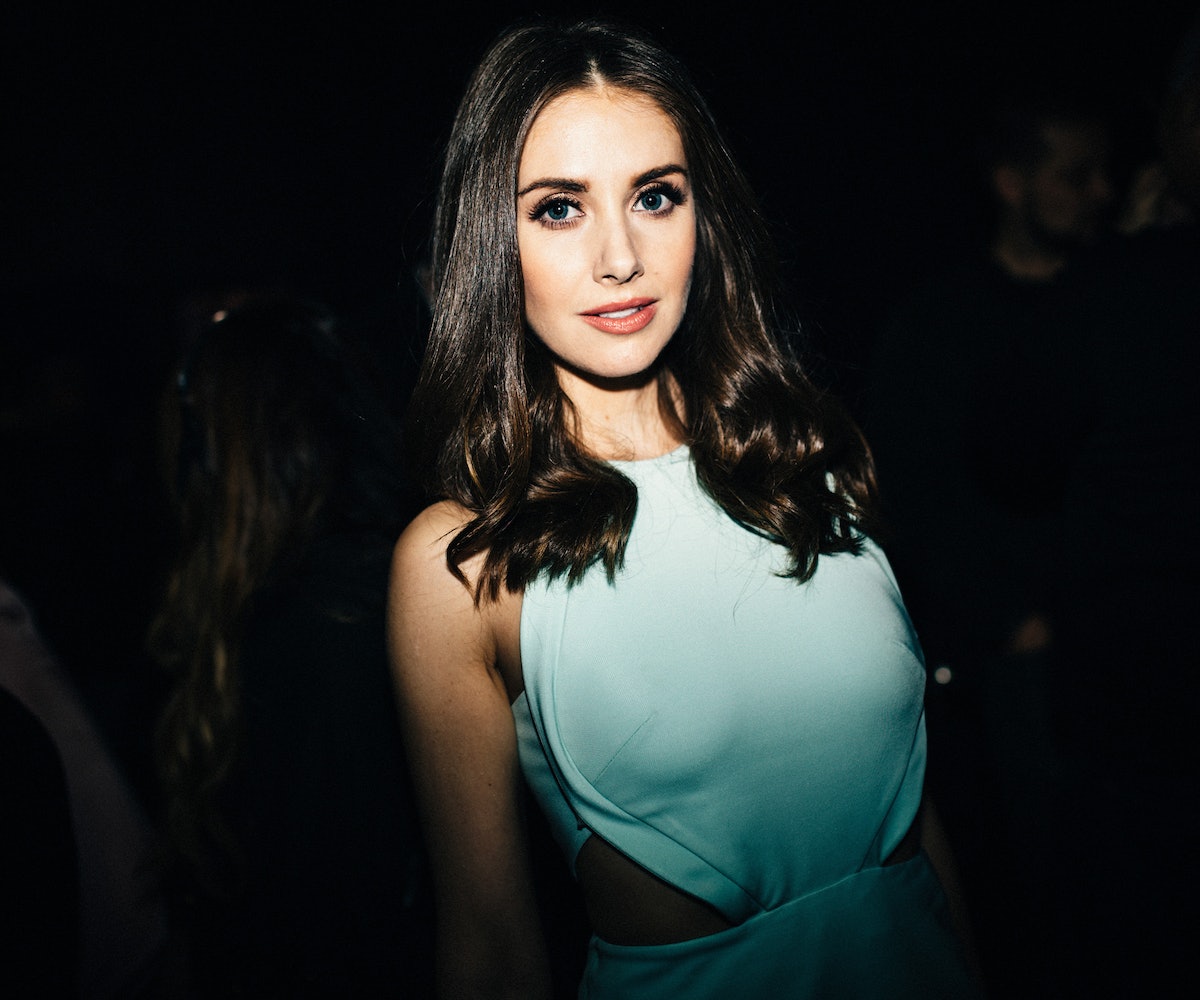 The new year looks to be a pivotal one for Alison Brie. Like everyone else, she was sorry to say goodbye to Community and Mad Men last year, but it freed her up to do movies, like Sleeping with Other People opposite Jason Sudeikis, and a slew of movies in 2016, including How to be Single, Get a Job, and The Disaster Artist. That last one is directed by brother-in-law to be, James Franco, produced by Seth Rogen and Evan Goldberg, and her co-star is fiancé, Dave Franco (#relationshipgoals).

When she’s not doing all that, she relaxes by producing her pet project Teachers, starring comedy ensemble the Katydids, and premiering January 13th on TV Land. After a successful run on the web, the all-girl improv troupe (all coincidentally nicknamed Kate, Cait or Cate) is taking their madness to cable with the new series focusing on the faculty of a suburban elementary school. Here, Katydids co-captain, Cate Freedman, joins Brie to talk about the new show, women in comedy, and sweatin’ to the oldies with your third-grade teacher.

Was Bad Teacher with Cameron Diaz an inspiration?

Alison Brie: We steer away from that comparison. Those kids are a little older. We were talking about what an advantage it is working with younger children.

Cate Freedman: The kids add so much to our show, specifically at the elementary school level and age. Those are the kids we wanted because they’re still sweet, they’re still really honest.

AB: It’s sort of a better juxtaposition against the raunchiness of the teachers. The innocence of the kids is highlighted against that.

CF: We have to figure something out about craft service because between scenes they would go there and get so jacked on candy and chips. They’re just bouncing off the walls. It’s a scientific fact that after crafties, they’ll jam out real hard ,then they’ll crash and be cranky and look into the camera.

What about inappropriate teachers you’ve had?

AB: There’s a teacher a family member of mine worked with. She was a preschool age teacher but she worked a phone sex line in her spare time at home. It’s sort of what we’re talking about with this show. The perspective of your teachers when you’re a kid, they’re an authoritative figure and maybe you sense they’re weird or not. But now as an adult you realize that they’re just 20-year-olds with real lives, just trying to make it through.

CF: I had a wide array of different teachers, and at the time I was like, 'This is pretty normal.' Then meeting people and becoming an adult, you talk about their experiences and you realize, holy shit, I had some weird-ass teachers that were really out there.

CF: My favorite teacher that still sticks with me—and I feel like I used her for inspiration—was Loretta Lee. She was my third grade teacher and she would do bizarre things. She really wanted us to be fit, so she would bring her Richard Simmons workout tape, put it in there, roll the TV to the front of the class and say, ‘Let’s do it, guys!’ She would flip her earrings, banging back and forth, sweating to the oldies with us.

AB: You forget how little teachers are monitored by administration in the school systems where they’re kind of just left to their own devices.

Is it a good time to get an all-woman show like this made?

AB: There’s definitely not a feminist bent behind this show. But it also just happens that most teachers are women. I think the draw for the show was the content, which I think is awesome. But I think it’s great that people are acknowledging that there is more of a demand for women in comedy. It’s a mark that they can make money and people want more.

AB: Men in comedy have become more receptive to women being equal in comedy. You think of the original cast of SNL and you heard stories of a lot of sexism that went on there. So I think we’re seeing a lot less than that. I’ve never experienced it in the comedies I’ve worked on. So I think this is a good time. I hope it just continues to change in that way.