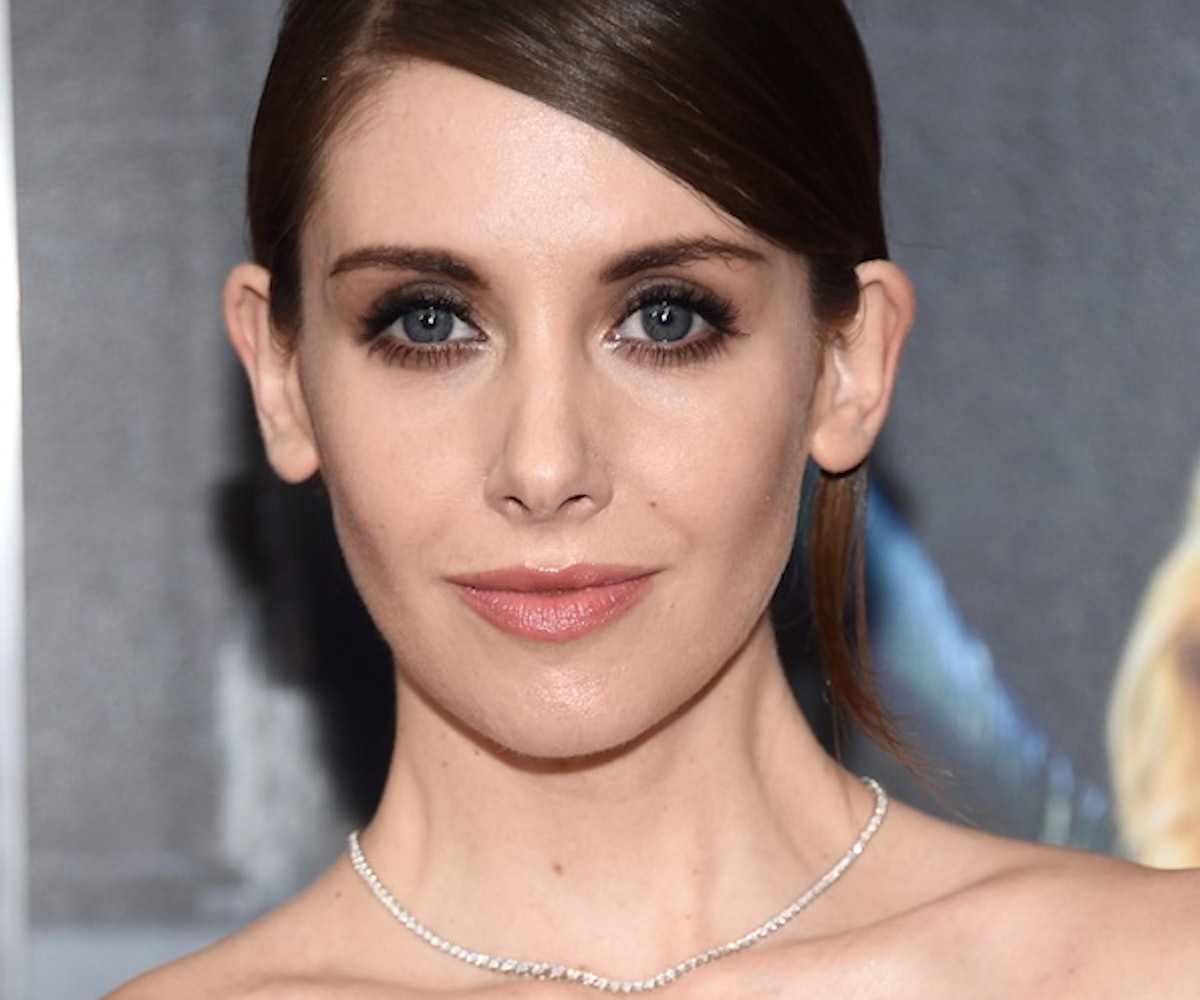 This summer, I had an epiphany that being truly single is about privileging the primacy of one’s perception. Said in a less obnoxious way, it’s about being the writer, director, and star of your own movie. Before this epiphany, when coupled and while breaking up, I’d view my life as a split-screen: half-him, half-me. Even when I wasn’t with my one love, I’d imagine us and life after him; reminisce, future project. In doing this, I stopped being present to myself. It’s stupid and I guess pop cultural, because Hollywood’s Valentine’s Day offering, How to Be Single, riffs on it. Rebel Wilson’s character Robin calls the phenomenon “dicksand.” Dakota Johnson’s “Alice” keeps falling into it, only to find herself suffocated by it. The gag is funny and cathartic, one of the highlights of an otherwise just-okay rom-com.

I really liked Bachelorette. I think that’s why I thought I’d like How to be Single (the Rebel connect). How to Be Single is no Bachelorette though. The characters echo subtly twisted stereotypes, the soundtrack grates, and the jokes feel culled from Internet memes. In contrast to this is the perfectly culled cast. Alison Brie in particular is a highlight: sweet as strawberry rhubarb pie as Lucy—the Charlotte of the ensemble—a type-A princess looking for Mr. Right via every available dating app. Lucy has even designed an algorithm to optimize her chances of meeting The One. Predictably, this isn’t working out.

Two weeks ago, I met with Brie at a hotel in Hollywood to discuss the film, rom-coms as a genre, love in Los Angeles, and elitism. We talked for fifteen minutes, then she was whisked away to Jimmy Kimmel.

What kind of research did you do for your role in this movie?

I talked to my sister a lot. She met her husband online and when I told her about the character she was like, “Oh, you can just base it on me! Sounds a lot like the mode I was in when I decided to get married.” Of course, it’s not really her, I play extreme version. I also inevitably ended up talking to my single friends about their online dating. A lot of Tindering, a lot of Raya…

Raya is a new dating app that’s kind of like the Soho House of dating apps.

You have to have two people recommend you in order to get in, and then they go and look and see how many Instagram followers you have. It’s an elitist dating site. [Laughs]

Woah. I suspected that must exist but I didn’t know.

I think celebrities end up using it. It’s hard as a recognizable person to do online dating. You put yourself in a very vulnerable position when you’re putting your likes and dislikes out there and things about you. Even the photos you choose to post is a very vulnerable thing.

If you made a profile, what would your likes and dislikes be?

You grew up in Los Angeles, right?

I’m new to Los Angeles, by way of New York, and in coming here, I’ve had bunch of people do this “welcome to L.A.” bit. It’s this cynical thing. I’ll recount something bad or sad that’s happened, and I’ll hear, “welcome to L.A.”

Yeah, a lot of it has to do with thinking L.A. is a loveless town, which is not my experience thus far. I was wondering if maybe you could describe what love is like in L.A.?

Wow! A loveless town. That sounds so terrible! I think it can be difficult to find love in L.A. because people are very isolated in their cars and apartments, but at the same time, there’s a really relaxed, easy vibe in a lot of parts. There’s a lot of coffee shop hanging just like there is in New York. People always kind of want to chat and tell you their story. If you’re paying attention, I think you could find love anywhere.

Yeah, that’s true. Do you have favorite L.A. dating spots?

There was a restaurant in Larchmont called Girasole that was my favorite, favorite go-to spot. It was a teeny tiny Italian restaurant. Now they’ve turned it into a very corporate-looking larger restaurant. That was a bummer. My fiancé [Dave Franco] and I, we love parks. I think a great daytime date is to go to the park and just lay with each other and read to each other and hang out.

What do you read?

Just whatever! It’s been awhile since we’ve done that. Usually we end up reading some Roald Dahl book or short stories.

Your ring is very beautiful by the way. I’m distracted by it.

Thank you! I love it so much. Irene Neuwirth designed it, she’s incredible.

Was it a special design for you?

The movie had me thinking a lot about money and worth and jobs and how they influence our love lives. Part of Alice, the main protagonist’s happy ending is that she finds out [spoiler alert!] that her best friend is rich. It’s a classic romantic-comedy happy ending, falling into a cushion of prosperity. I was wondering what you thought about that, how you saw that working in the film?

Well, I mean that didn’t strike me as part of Alice’s happy ending, that her life is going to be great now that her friend is rich. I don’t think that money has a lot to do with how we’re portraying happiness in the movie. But I do think work has a lot to do with it. Look at Leslie [Mann]’s character. She’s been completely focused on her job, and has put other things, not just love, but having a baby, on hold because of it. I think similarly, with my character Lucy, we don’t really talk about it, but you know, she’s a teacher, she went through school, she’s really intelligent. There’s sort of an interesting a statement about women fulfilling themselves with their jobs and then realizing that maybe they want something more, and can they have both? They can.

I think so. [Laughs]

I want to talk more about the portrayal of happiness in the film; it’s a big theme.

I think a big scene for me is Lucy’s full-on mental breakdown, where she is very unhappy and is feeling very overwhelmed, and then the physical manifestation of that is she wants out of her skin, out of the fake hair attached to her head, the Spanx, the heels, all the conventions that it feels like women are expected to do to get men. It’s then, in that moment, when she’s super vulnerable and being very true to herself, that she becomes open and receptive to finding love.

Yeah, it’s very limiting. I think Lucy’s downfall is her own intellect and standards. This box that she’s created to fit the perfect man in, it’s limiting to who she is, who she could be, and the type of life she could experience.

What are some of your favorite romantic comedies?

I love so many of them! I love When Harry Met Sally, that’s like, the king of rom-coms. I love The American President, it’s one of my all-time favorite movies.

Is that the movie with Annette Bening?

It’s Annette Bening and Michael Douglas, and he’s the president.

Yes! I remember the VHS cover.

Oh my god. It’s the two of them and they’re dancing and her amazing shoulders and her blue strapless dress. I love that movie. Four Weddings and a Funeral is great. I love Hitch. I LOVE Hitch.

Hitch is with Will Smith and Eva Mendes, both at the top of their game. I love My Best Friend’s Wedding with Julia Roberts. I mean, Pretty Woman. These are movies that I watch all the time. Anytime they’re on. If I’m not feeling well or if I’m depressed about something, rom-coms are my favorite thing to cuddle up in bed with.

Yeah, they can be really comforting. Would you say that when you watch a romantic comedy, you’re watching for the women? The love interests are often so blank; I have a hard time recalling male characters from rom-coms.

Oh yeah, definitely! Yeah, I think all of these movies really hinge on the female characters. Absolutely. I think that people so often belittle or look down on the genre, but actually there’s really amazing work being done with the female characters. They have to be accessible, beautiful, and have depth. They have to cry and laugh believably. To want to watch someone fall in love, I think they have to have a lot of appeal. It’s a bigger challenge than I think people give credit to.