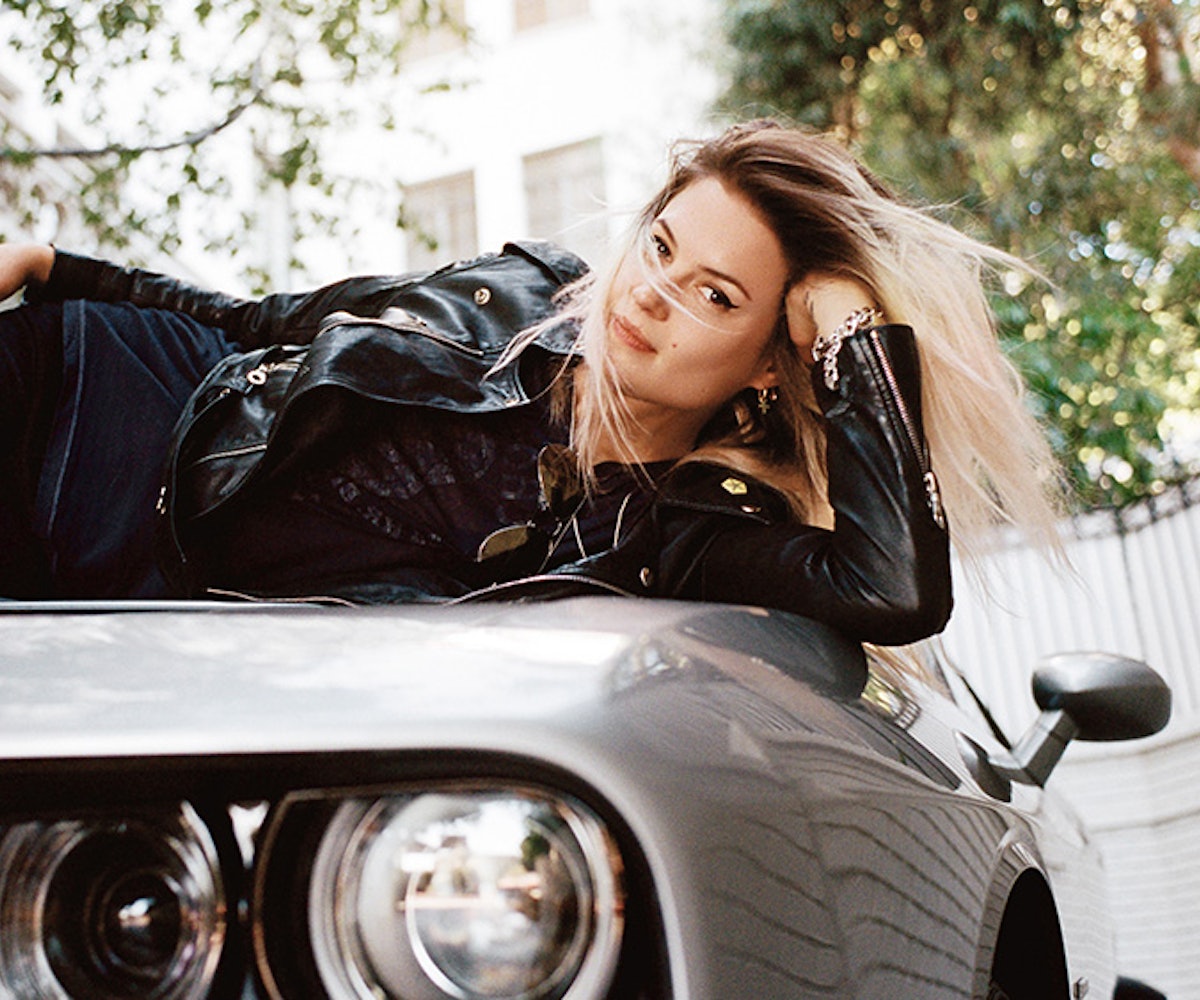 Jack White is the first person I see when I step into the elegantly lowkey lobby of West Hollywood's fabled Chateau Marmont. Even if he weren't one of today's most recognizable musicians, his pale face would still stand out among this sun-kissed Los Angeles crowd. He's compulsively smoothing his perfectly black, middle-parted hair while nursing a beer at a table with two guys I quickly ID as Raconteurs bassist Jack Lawrence and Queens of the Stone Age keyboardist/guitarist Dean Fertita. Together, White, Lawrence, and Fertita make up three-fourths of The Dead Weather, a Nashville-based supergroup fronted by one of music's most badass babes, The Kills' Alison Mosshart. This glimpse is the last I'll see of White; when I sit down to chat with Lawrence, or "LJ" (Lil' Jack) as his bandmates call him, and Fertita later on, the Third Man Records founder, former White Stripe, and Dead Weather drummer will not join us. Perhaps he just doesn't feel like doing press. Or maybe that's intentional—Mosshart seems to be the star of this show.

"Good morning!" she says cheerfully, opening the door of her third floor suite, surrounded by sunlight and cigarette smoke. She's a rock 'n' roll dream, tall and lanky in black boots, black jeans, and a perfectly distressed chambray button-down. Her bleached hair is in a ponytail, showing off her dark roots and faded pink tips; her cat-eye liner is flawless.

It's two in the afternoon, but the Florida native is a bit of a night owl, she says, especially when it comes to making music: "I can't be howling at 10 o'clock in the morning—that's painful." Mosshart's holler is one of The Dead Weather's defining characteristics. Alongside deafening drums, swampy guitars, and the dark electric charge that underscores every track, her visceral vocals are what make the band's latest album, Dodge and Burn, an addictive, all-out assault on your ears. "It accidentally worked when we did it the first time," says Mosshart of the original jam session between friends that evolved into their debut album, 2009's Horehound. So they did it again (2010's Sea of Cowards), and now a third time, fitting in writing and recording sessions whenever they're all in the same place. "This feels like a crazy high school band where we're just like, 'Cool, man, let's play after school,' and somebody's hitting record and it just happens to be awesome," says Mosshart. "If you find that musical match with anybody in your life, it's a gift."

It's a gift Mosshart obviously finds precious, because with The Kills finishing up their fifth album and her burgeoning career as a painter (she had her first solo exhibit in New York this past June), it's not like she doesn't have plenty else to do. In fact, all the members of Dead Weather are so busy they won't be touring for Dodge and Burn, which is a crying shame since the album sounds exponentially better the louder it's played, and Mosshart is a born performer, strutting and slinking on stage like a woman possessed. "A great show is one I don't remember at all. I walk off and I know I went somewhere," she says, the silver glitter of her nail polish glinting as she draws another cigarette from her pack of American Spirits. "Music is to blame; it's leading me."

Music leads her songwriting as well: "We're all in the same room. Jack's on drums, LJ's got his bass, Dean's got his guitar, and I've got a mic, a notebook, and a pen," she explains of The Dead Weather's process. "They start to play music and then I feel a certain mood, almost a character. That directs the story in my head."

It's these stories that lead Lawrence to call Mosshart "the champion of this record." I'm now back in the lobby with him and Fertita, whose friendship is made obvious by the way they finish each other's sentences. It's like a verbal version of the creative process Mosshart just described, and which Fertita boils down to "fucking around." "[Alison's] got the hard job. She has to come in and make something out of jams," continues Lawrence. "Her lyrics are incredible," adds Fertita. "'Like bubble gum in your hair,'" quotes Lawrence from "Open Up (That's Enough)" off of Dodge and Burn. "It's not fair," chimes in Fertita. "'But it smells good,'" Lawrence finishes, with an appreciative laugh. "Forget about it! That's great."