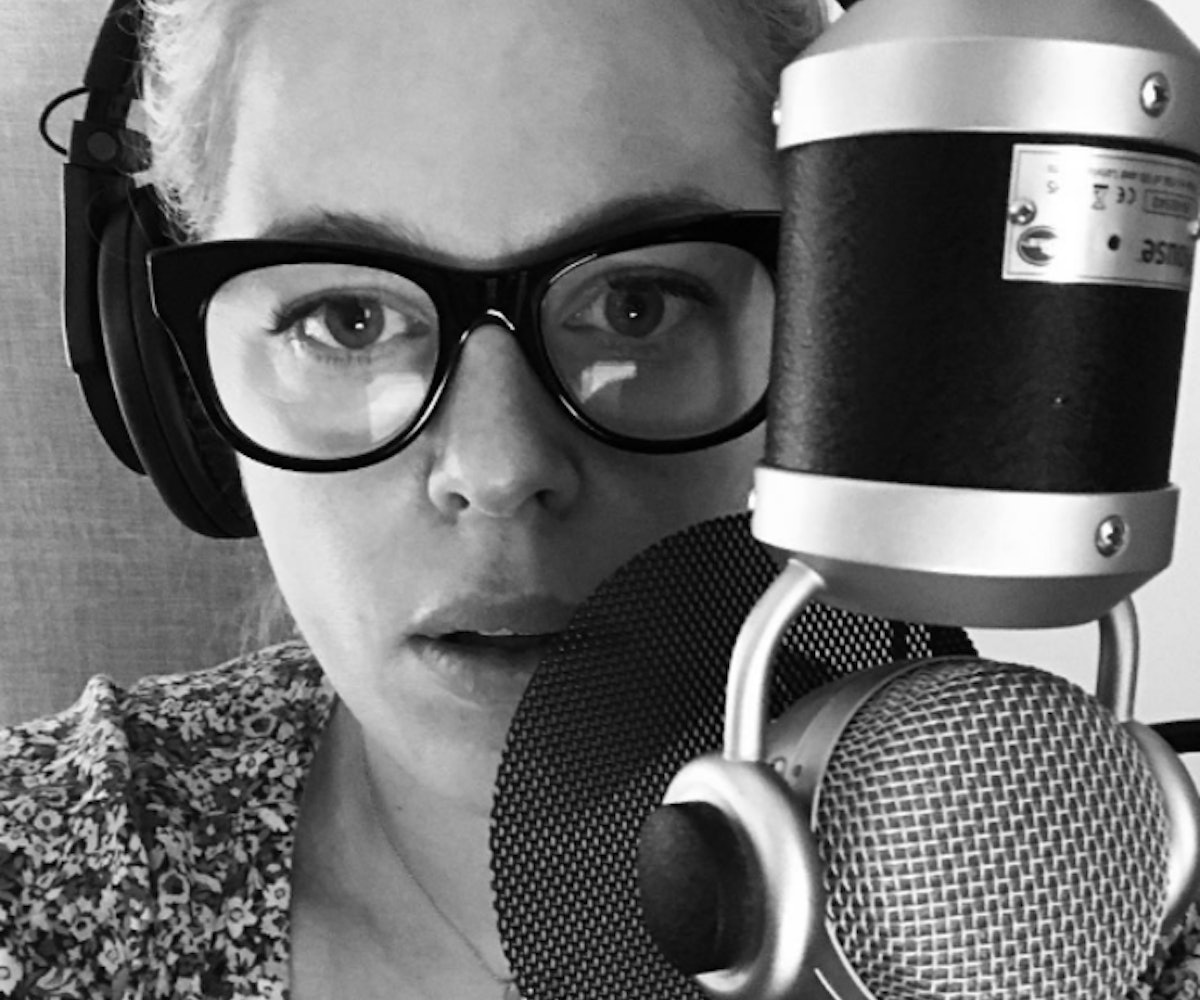 If there's one thing to know about Amanda de Cadenet, it's that she wants her work to serve a purpose. Or, as she put it to me on a recent phone call, "I don't want to make more stuff just for the sake of it!"

And, in fact, that's been a defining feature of de Cadenet's work for the last several decades, making her one of the most innovative multihyphenates in the creative sphere. De Cadenet first made a name for herself as a teenager, when she hosted not one, but two, ultra-popular U.K. television shows. From there, she rose to success as a fashion and portrait photographer, and then returned to television several years ago as a producer and host for her show The Conversation, which is known for its frank tone and willingness to unflinchingly talk about the sort of issues that make many people uncomfortable—you know, exactly the kind of things more people need to discuss.

And now, de Cadenet has written a book, It's Messy: Essays on Boys, Boobs, and Badass Women, which carries over the ultra-honest vibe that she's known for and addresses the specific things that have happened in de Cadenet's life—unplanned pregnancy, abusive relationships, sexual assault—and turns them into universally relatable things. De Cadenet is never prescriptive in this book; if anything, she, more than most people, knows that there's no one way to achieve a goal. Rather, she offers up her life experiences as an important example of the glorious messiness that comes with being a woman, and as proof that every life comes with its own complications.

Below, I chat with de Cadenet about what inspired her to write the book, what it's like to be a famous creative, and why writing is really hard.

Right now seems to be a really important time to embrace the idea of being a messy woman. Why do you think that is?

I think we are living in a very messy time. What happened when we got [Donald] Trump is that the covers came off. Everyone was like, "Who the hell are all these people that voted this guy in?" Then alarmingly, it became clear that it was actually 53 percent of [white] women. So, people are searching now for what has meaning—what means something to them, what they give a shit about, what feels authentic and real. There’s been so much confusion and upset, generally speaking. Everyone I know is like, "We need some truth in the world and in our lives."

It's a very personal book, and it grapples with difficult topics, though never not with humor. Which parts did you find were the most difficult to write?

I’m someone who uses media and uses the content that I create—whether photos or The Conversation, my book, or social—and address and challenge the idea of the perfection of women. I want to change the perception and form a more realistic view of women, and I do this by addressing areas in which women have historically been shamed—one is motherhood. It’s like, if you do have children, then you’re not doing it right—you didn’t have the right birthing method, you’re breastfeeding incorrectly, you should have done a C-section versus vaginal. There’s constant judgment in being a mother or in choosing not to be one.

Motherhood and sexuality have a lot of shame surrounding them; women are publicly and privately shamed if they don’t fit into the stereotypical norm. I was extremely shamed as a teenager, and so, knowing that horrible feeling, I work hard to advocate for removing shame in women’s lives because it’s damaging. So when writing, it was interesting to notice or feel the areas where I felt shamed, [and how that was difficult]. You don’t really know your own relationship to something until you expose it.

When I was writing about having had an abortion, a couple of people told me to take it out of the book. I was first told to take it out of the proposal because a publisher wouldn’t buy it with that in it, but I said, you know what, then they’re the wrong publisher for me. It was almost as if, me having chosen to have an abortion, a choice that I made, was supposed to be a secret. But for that reason, I needed to keep it in there, simply knowing so many other women have also felt that shame. My goal with this book is to bring these issues and challenges that so many women are faced with out of the dark and into the light. I was faced with it on my own, and here’s how I dealt with it. I'm hoping it’ll help someone else. When writing, I had to keep coming back to my goal, to use my life stories as a way to remove stigma, to create empathy, and to hopefully normalize aspects of a woman’s life that all of us are going to go through at some point.

Although I think a lot of women will learn a lot from reading this book, it doesn't really give advice, which I think is good.

I am just a woman who is looking for answers. I never want to tell people what to do, because I’m continuing to learn and be a student of life myself. I have always wanted to be like, "I’m in this with the rest of you." We’re all trying to work shit out. The more we can help, the better we can support each other through the process. It just feels so vulnerable to express things that can be misinterpreted in your story, but I choose vulnerability even though it’s obviously, at times, uncomfortable.

How was the actual process of writing the book in comparison to other things that you work on?

Writing the book was the hardest creative process I’ve ever been a part of. It was actually excruciating. So many times I was like, Why did I think this was a good idea? My writer friends said it’d be like childbirth, you’ll forget you did it. But I don’t think I ever will. It was a hard, lonely process.

I usually have other people on set with me to bounce stuff off of, but I didn’t have it here. So it was disconcerting to doubt yourself and question everything constantly. Also, I have a full-time job, three children, and a company, so I wrote this book literally whenever I could—I would be waiting for my daughter or son after sports practice and would be in the car writing. I took my laptop everywhere. I wrote this on my iPhone or in Whole Foods. I kept a draft on my iPhone, so I could do it in bits and pieces.

How did you decide what topics to cover?

My social media audience gave me the subjects they wanted—they asked me to write the book. Eventually, I was like, "What do you want me to write about?" And they told me, and that’s the content of the book. They gave me the assignment, and I did it.

You've been in the public eye your entire adult life. What do you say to all the people who look up to you, and think that fame is the number one career goal a person should have?

Fame is a very intoxicating drug. I really do look at it like that—it is very powerful. I have a few friends who have 50 million Instagram followers, and I think, it is so crazy—visualize 50 million people. Everything you put out, by one touch on your phone, you can reach those people. How do you process that? How do you understand and uphold your responsibility in that situation?

I had to make sense of fame because I didn’t understand what it was. I think that there are wonderful things about it; it’s ultimately attention. It’s people seeing you, and being seen is a wonderful thing. People feel so unseen and so unheard generally in the world, it can seem like getting the validation and attention of so many people is the answer. Temporarily, it is. But when you’re reliant upon anything else to feel good about yourself, you’re at the mercy of something outside of you. That’s dangerous.

What are the positive things you see in the next generation of young women?

I have experience with working with Gen Z, between my kids and my community in #GirlGaze, and I think Gen Z is incredible. They’re my kind of people. They’ve grown up, swiping before they could read, they’re so tech-savvy, they can tell what is BS and what isn’t because they have a radar. They’re transparent, authentic, and used to having a voice due to growing up on social. I love the generation because of their authenticity—they are who they are. They also give a shit. If you talk to my kids and others, they have opinions. They have a dialogue and frame of reference for gender fluidity, sexism, racism—really significant cultural issues. They’re so clued in in ways generations have never been.

It's Messy: Essays on Boys, Boobs, and Badass Women is available for purchase on September 19