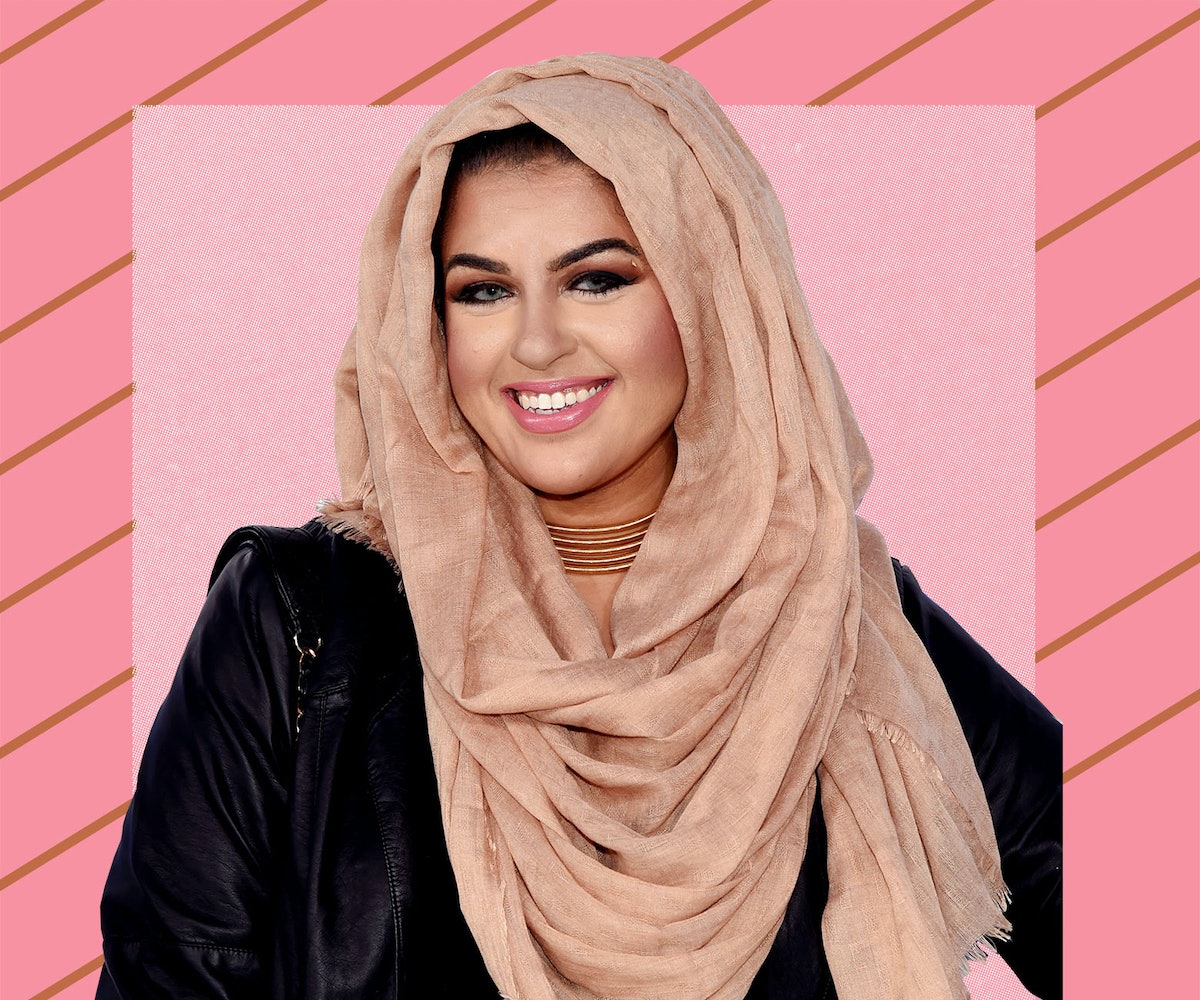 that’s circulated amongst basically all black people who work in an office. It shows multiple scenes from

of Celie and her sister Nettie holding hands, playing games, and being carefree. The text reads: “When u work with 500 white ppl and u finally see the new black person they hired in the hallway.”

We make light of it, but it's a sad reality. So many workplaces have such limited diversity that, when you see someone who doesn’t read white, you automatically form a kinship with them—even if you’ve never seen that person before, they don’t work in your department, or you haven’t even caught their first name yet. You befriend them, you cheer for them from the sidelines, you urge them to win because you know how important their presence is.

Despite not working with her, this is the type of kinship I felt when I first encountered Amani Al-Khatahtbeh. I’d interacted with her via Instagram, witnessed her talk on a panel once, and was vaguely familiar with her site, but I still found myself rooting for her when she announced her upcoming book

Muslim Girl: A Coming Of Age

, and other notable publications, Al-Khatahtbeh has become a force in media over the past couple of years. The 24-year-old is the founder of

, the leading online magazine for Muslim women, and a boisterous voice for a group of people too often silenced and ignored.

We caught up with Al-Khatahtbeh in between her trips to Dubai and Florida to chat about her new intimate memoir, which centers on what it was like growing up as a Muslim-American in a post-9/11 world. Read our conversation below.

The book is very personal. I imagine it had to have been difficult to rehash these memories, insecurities, and experiences, both good and bad. Did it take an emotional toll on you?

It was actually the opposite. I didn't realize how therapeutic it would be to write this book. By the end of it, I felt like a weight had been lifted off my chest that I wasn't even aware I was carrying. I just felt lighter; I felt like I unloaded something onto the world. By the end of it, I was an even happier person and able to reflect on how everything really comes to fruition and comes full circle.

Was there a certain part that took you longer to write about?

The part that took me the longest to write was probably about the things that my family had to endure right after 9/11. I went back to my parents, and I had conversations with them over dinner and asked them to recall the memories that they had right after it happened and what they had to experience. For me, since I was a child, I forgot so much of it that had taken place. It brought back so many memories. Now, a lot of things are put into perspective that I just didn't realize how much my parents had to go through during that time.

I remember there always being conflicts in the flea market where my dad works. One of the vendors created a petition to take out all of the Muslim vendors from the building. It's one of those memories where you're like, "Oh my god that did happen." It's crazy because you're able to see more clearly how this type of rhetoric so easily falls into violence and more intolerance and hate crimes, etc. For me, it just made it easier to see how the circle is perpetuating itself now and why we have to put a stop to it.

I also feel like it's typical of parents to shield their children from that hate when they're younger.

That's actually one thing I discovered, too, when I was writing this book. One of the experiences that had the greatest impact on me in my life was my trip to Jordan when I was 13. I assumed my dad's decision to move our entire family to the Middle East was for the sake of education and meeting our family and stuff like that, but talking to them, it was revealed to me that the primary reason was because they were really scared of us being the victims of hate crimes here. They got scared that someone was going to harm their family. People make jokes all of the time like, "If this person is elected I'm going to move to Canada," and I didn't realize that's exactly what my parents had to do.

What do you hope your book adds to the conversation that MuslimGirl hasn't already managed to do?

Perspective in where we're at right now. We are all links in this chain, in this long line of a movement of women of color to reclaim their narrative and have that empowerment, even against the status quo. It's really important to recognize our role in that journey. We all stand on the soldiers of giants, but we are also trying to push for a new chapter for all of the people to come after us. At MuslimGirl, we know exactly where we are in that; we're very self-aware of the tokenization that we're susceptible to, of the many different issues that come into play when it comes to being on the frontline of media representation in this way. And I hope that the book really puts that perspective into it.

More than anything, for our non-Muslim readers, what I hope it does is make the experience of a Muslim woman in a post-9/11 society accessible. That's really the goal here, to show people what life is really like. When we produced the

, the immediate reaction was people saying, "Oh my god, is it really that bad?" And all the book trailer showed was this shot of time, from getting ready in front of my bathroom mirror in the morning, to going on the subway platform, to having people ask if I’m a part of ISIS, and all of the things that go into a Muslim woman's head as she's trying to just commute to her job in this hyper-Islamophobic culture that we've cultivated. The trailer includes things that I’ve gone through; it’s a lived experience.

There’s a part in the book where you explore this trend of Muslim women being propped up on pedestals in the media now, the tokenization you touch on. It’s also something that happens with black and plus-size and transgender individuals, what do you think it’s going to take for society to start seamlessly integrating these minorities into narratives, rather than calling them out?

One of the coolest moments I've experienced this year is when I was on a panel with Shonda Rhimes for the United State of Women Summit. I got to listen to her speak about media representation, something that she's obviously paid such a tremendous part in. She told this room of people that she hates the word diversity. She doesn't like talking about it, and she said the reason why is that all she tries to do is make her shows reflect the world around us—that's all. And it shouldn't have to be called out; that's just something that's incumbent upon us.

When I visit different media companies, the first thing I do is see if the newsroom looks like the world around us. Who are the people writing these stories and discussing these issues? That's what we can hope to see, that our newsrooms, our fashion lines, our brands look like the many people that make it up. That's honestly what we hope to do. My ideal representation is when identity—things like religion that might be used to separate us or might be used to tokenize in these different spaces—isn’t the primary focus. I'd love to see a great character take on a main role and the fact that they're Muslim isn't actually a part of the narrative. I think that level of representation is what will make it finally fully integrated.

You did become the first veiled Muslim woman to be recognized in the media category, what does it feel like to bear that weight of representation?

There's a lot of pressure. I know all of the responsibility that comes with being in a position like the one that I've been growing into these days, but it's a challenge that I really hope to rise to. Beyond that, I just see the milestones that we're accomplishing at MuslimGirl to be one of many to come. I'm hoping that, if I'm going to be the first veiled Muslim woman in the media category, that it's just to make it that much easier for others to come after me; I think that that's really where the success is. It's not if we get the first person there, the first token headline, the success is if we're able to repeat that over and over again and get more and more people into those spaces. In terms of tokenization, it's the same thing that I think happens with many minority communities. People that are on the frontlines, the first to enter these spaces, they get tokenized no matter what. And then you see them more and more from that community or respective minority, the more they enter those spaces, the less possible it even becomes to tokenize their presence anymore because they've achieved such a level of emergence at that point. I think that that's really what we're trying to do, building it and making it a collective movement.

Obviously, you're very young and your story will keep going. This is a coming-of-age novel, do you hope to write an of-age novel one day?

] Before I even started MuslimGirl, my earliest dream as a child was to write a book. That's something I've always wanted to do, and I've always been a writer first and foremost, that's always been my passion. This book really means a lot to me, it resulted as an opportunity to push back against hate, and I think that's really symbolic. From here, I definitely hope that it's the first of many books that I'm able to introduce and help change the feminist lexicon as we know it.

What motivates you every day?

I always think back to this one moment that happened this summer. As soon as I walked into this United State of Women Summit, a Muslim mother came up to me with her four-year-old daughter and asked if she could take a picture of us together because she wanted to show her daughter that she could be anything. That moment defines everything that we're doing; we're doing it for that little girl. I think that's what keeps me motivated every day.

You mentioned briefly the common joke that if Donald Trump gets elected, people are going to flee the country. If that were to happen, what would you do?

We're not going anywhere. This is our country and, regardless of who may become elected to lead, and what they choose to say, it's a country of the people, for the people.

Muslim Girl: A Coming Of Age

comes out today, and you can order here.