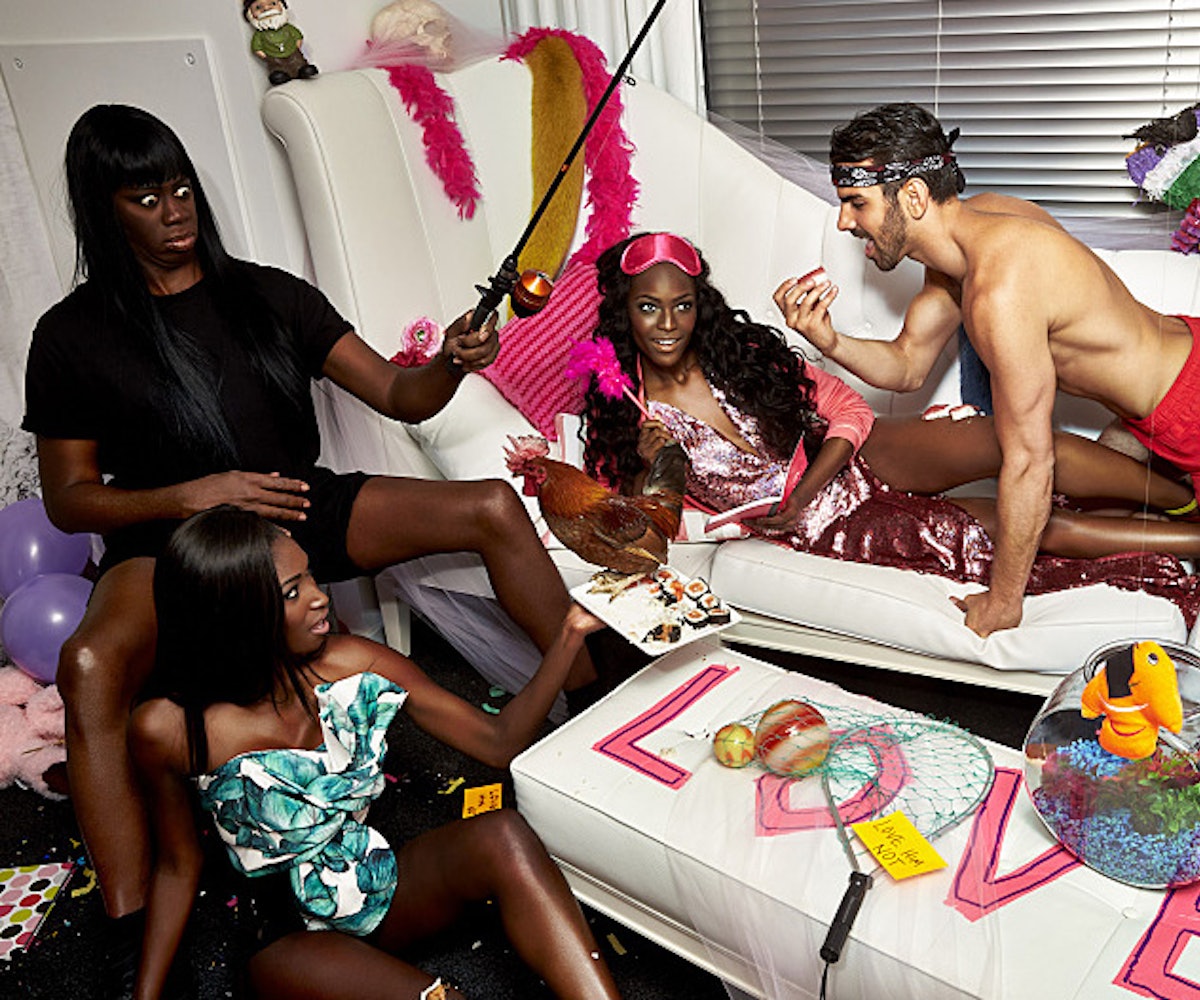 Looks like some of the models are thriving off the golden saying, “What happens in Vegas, stays in Vegas.” As Mikey took the reigns of the Tyra suit, his “sex senses” were tingling. Now that Ashley is out of the competition, things between he and Hadassah started to heat up. Devin wasn’t having it. The treasured “DMA” squad looks like it’s losing its glue.

Now, I must say: Jealousy is truly unattractive. Hadassah expressed her frustration about her place in the bottom two the previous week. She confronted me saying I didn’t deserve my spot. Devin chipped in and said there was favoritism going on. Oh jeez…How catty can models be? I feel as if the models should be worried about their own performance and things they need to improve. But hey, if I can serve as a distraction, be my guest.

This week, we headed on over to Zappos. The headquarters is located in Las Vegas, so we had ourselves a little adventure. Each section of the office was a different theme designed to deliver happiness and make you feel like a child again. (Definitely one of the best working environments I have ever stepped foot in.) We met Melissa Costa, the Head of Brand Marketing at Zappos Couture, and learned what Zappos is all about from Tony Hsieh, the CEO and founder of Zappos.

As for the challenge, we were faced with a “Chic Boutique Runway Challenge" and a salon style runway. Salon style, which is said to be the evolution of fashion, is smaller in scale and has a lot of audience interaction. Zappos representatives selected outfits for us to wear from its Couture collection. From there, we had to tweak the outfit quickly to please the customer. The prize was an outfit from Zappos Couture, delivered straight to our doorstep.

Backstage, Hadassah confronted Kelly Cutrone about her feelings about being in the bottom two the previous week. She claimed she didn’t know what more she can do, and decided to point fingers toward me and said, “I didn't feel like I was supposed to be in the bottom two. I was actually thinking it was going to be Lacey. Like, do you guys think she’s perfect? What does she need to work on?” Kelly responded by saying she shouldn't even be worrying about me or any other model; rather, she should be focused on herself. Analyzing someone else's performance won’t enhance yours. Sorry sister.

Mame glided across the room and made her presence known which won her her fifth challenge prize. Hadassah and I end up at the bottom of the challenge score board with a seven. Rat snacks.

But we still had a photoshoot to attend to! And what’s on the table? Fierce-A-Gram: this is all about creative cropping. We are given a hashtag and instructed to act sweet and innocent in the close up shot, but the wide shot would reveal all the chaotic things Vegas throws at you. Miss J and our fellow models were also in the shots. Each set was filled with energy, but also super messy. Sorry SLS Hotel, we may or may not have tried our best to clean up.

Of course, all models deserve a night out in the city after a long day of shooting. So, we got to ride down the Las Vegas strip in a limo with complementary drinks. As my fellow models indulge in their “good-good,” I am passed a bottle of water because I’m only 18 years-old…WOO. We are slapped with Skull Mail in the middle of our limo ride, informing us only five models will continue after panel. Yikes.

Back in Los Angeles, we had an appointment with the panel. We got to see every Fierce-A-Gram, which probably takes the cake of “Funniest Top Model Pictures.” Although Mikey had a breathtaking photo, Mame took best performance because her challenge score was higher. Hadassah and I were left in the bottom two. Sadly, Hadassah ended up going home because the judges couldn't see the pageant girl letting go of her conservative ways.

As the numbers dwindle down, stress levels rise as does the difficulty. Only five models and three episodes left until the show’s very last episode of America’s Next Top Model. See you next time!