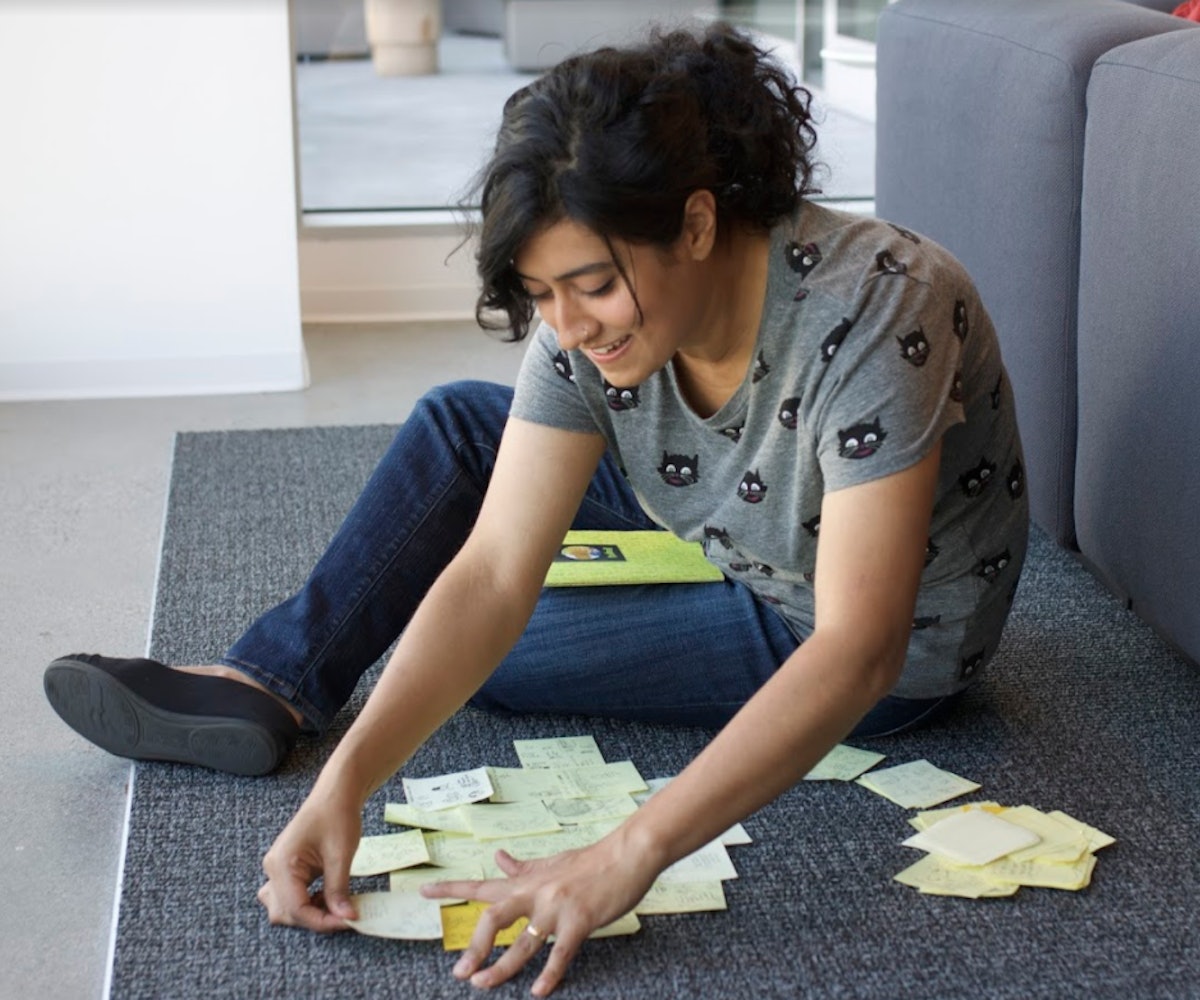 "It is apparently a thing that the Y chromosome is disappearing, and it's shortening, so men actually could go extinct within something crazy like 4,000 years," Aminder Dhaliwal tells me over the phone, recently, at the end of our conversation about her new graphic novel Woman World, in which men have all died out, and women live in a post-man society that resembles a utopia a lot more than it does a dystopia. In Woman World, there are whole new generations of girls who have never even met a man, and whose entire idea of masculinity is predicated on what they can glean from the cover of the Paul Blart: Mall Cop DVD. What's fascinating about Dhaliwal's execution of this extreme premise is that it mostly concerns itself with the quotidian realities of life for these women, they still have the same petty concerns post-men that they did pre-men, only now they can live more freely. It's one big Bechdel Test-obliterating look at the potential for a reality in which women don't have to apologize for being themselves, since that's all there is to be.

Below, Dhaliwal and I talk about her book, the power of women-only spaces, and why men are kind of like dinosaurs.

What—besides, I guess, the obvious reasons—made you want to imagine a world with no men? There's an image at the end of Woman World of a text conversation between you and two friends which suggests you kind of thought of this idea on a whim and weren't sure if it would work.

In 2016, I was going through a creative dry spell, and I was unsure about what my voice was, and I was figuring out if I was funny. I had trouble expressing myself sometimes at work [Dhaliwal was working on an animated series]. And I decided I should just do more of my own personal work, to figure out my voice. So after the 2016 election, I attended the 2017 Women's March with the friends who I texted with in the book; we went that day, to the L.A. march, and I was surrounded by all these "The Future Is Female" signs and all these amazing women, and it was such an amazing day. And that seed of "The Future Is Female" got planted in my head, and I thought it would be a funny and interesting way to explore feminism. I thought it would be kind of funny to take the most extremist, feminist view, the one that a lot of misogynists think feminists are all about—that we want to live in a world without men—and actually show that reality in a very day-to-day, kind of approachable way, on a much smaller relatable level. That text message exchange... I needed that validation, to know that this was a thing I should do. So I'm glad that they were like, "Yeah, go for it."

You took a pretty radical situation, in which all men disappeared from the face from the earth, and a future that anyone would think is this crazy thing, and what your book asks is, actually, what if... it isn't? What if it's actually normal? You have so many normal things going on in this book; the women all have insecurities and anxieties and crushes and jealousies and all this stuff, but they also have no shame. Is that just something you realized didn't have a place in women's realities when there were no men around?

I could lie and say that that was planned out, but in all honesty, no. All the characters are different aspects of me, and those are all the emotions I go through on a daily basis. So, depending on the week, I would just hook into my anxiety levels and decide, Okay, I'm going to do a comic about that, and next was my insecurity. So they're all facets of me, and each of the characters represents a different mental state I go through. That's why some are dinky one-liners, and some are a little deeper than that. Shame, though... maybe that's an aspect of myself that I didn't latch onto that much. This comic did come from a place of putting all my vulnerabilities out there. It started from a place where there was no shame, I wasn't about to apologize for my sense of humor. So I guess it was never in-built.

There was a refreshing lack of apologizing, because, you know, the trope of women constantly saying sorry for being ourselves, even to other women, is so pervasive in our culture, but it wasn't in your book.

Yeah, and I'm Canadian on top of that. [laughs]... I was at the time, and still am, in this amazing group of women in animation, like "support groups" that [comprise] different women talking to each other. We all work in animation, but we work in different jobs, and it's really, really open, and we all talk about our insecurities. It's really nice, and I've always felt that this was the truest way that all these women would interact; it's like a constant support group, you have all your best female friends around you, and you're just so open with them.

There's been a rise recently of women-only workspaces and groups and communities, and... what I'm about to say is really anecdotal, but what's interesting that I've heard, is how deep of an impact these groups have on the women who participate in these spaces. Being around only women is something you might not realize you need until you get it.

Yeah, I would never have known I would have needed that. I actually think that being alone is one of the hardest things. When I was going through a creative dry spell, it was after working on a project that was only me for so long. I couldn't figure out my voice, because I couldn't have a clear conversation in my own head with myself.

I do think for a lot of people, particularly women, but also just lots of people who are marginalized, they do end up isolating, because we can't handle all the noise. But we're social creatures, so it's important to have positive, shared social spaces. So... how do we do this? How do we get to a Woman World? How do we get rid of all the men? [laughs]

[Laughs] I really never wanted to make it seem like it was man-hating, so whenever I bring up men [in the book], it's from a place of missing them or putting them on some sort of a pedestal...

Or a motorized scooter?

Yeah! [laughs] That was one of the things I thought some online troll, who thinks this is a comic by some feminazi, is thinking, like, Oh, they're all going to be dancing around and celebrating that men are gone. I wanted to make clear right away that, tonally, that was not the idea. And obviously that would not happen, we wouldn't all be celebrating.

Right, not that much.

Our relationship with men would be kind of like our relationship with dinosaurs, where we have this strange love of them, and we forget the dark side. Like how if Jurassic Park were to be real, and we were to bring them back, we're just obsessed with the more fun side.

If what you're saying is we should have an island theme park where we keep all the men, I'm not saying that that's a bad idea. We'd have to relearn our lesson every time we go there; something would go wrong, and we get reminded, right, we never should have brought men back.

Or we could only bring back Jeff Goldblum.