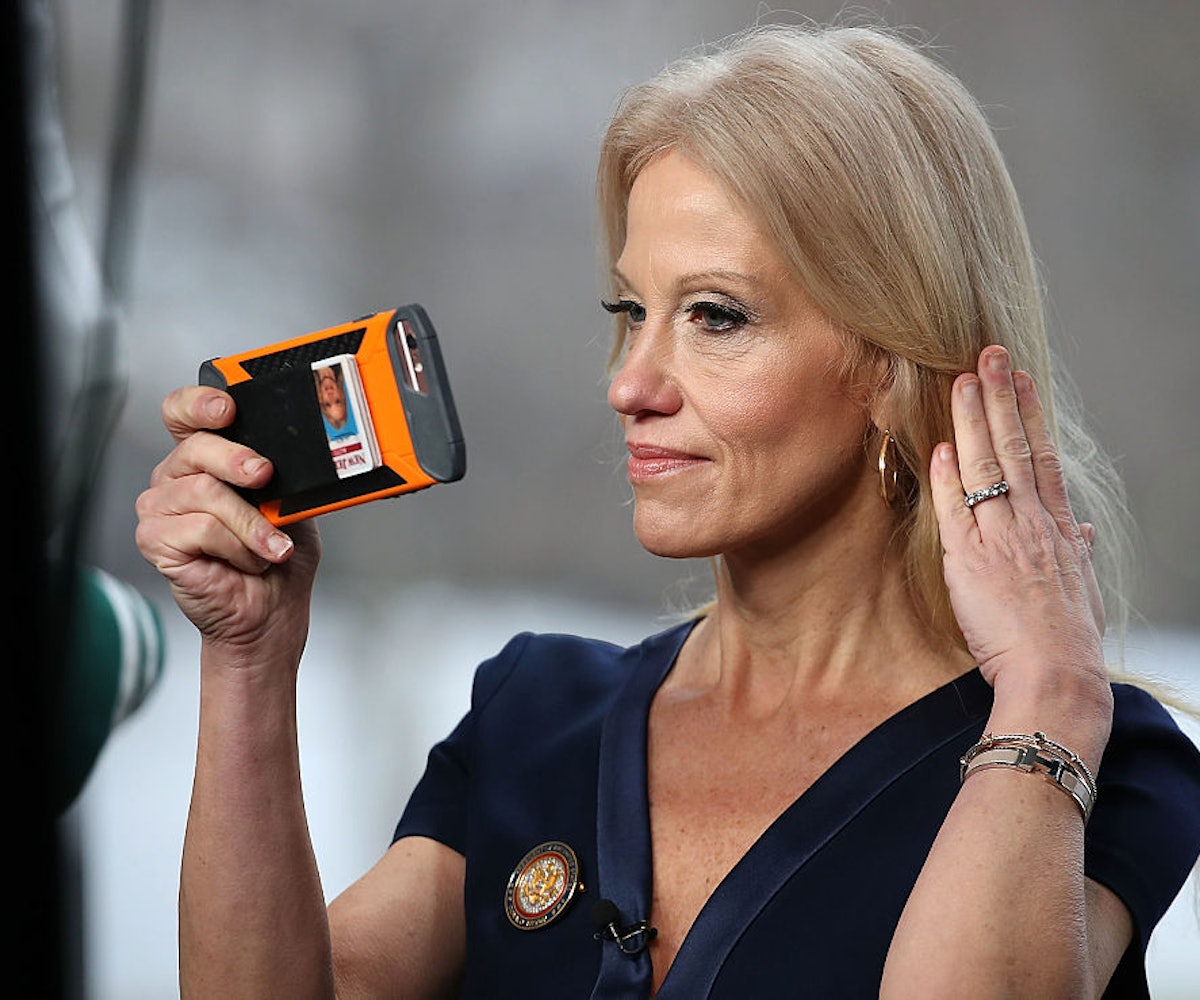 Following a blessedly long absence from the public eye, Kellyanne Conway returned to the airwaves this past Tuesday to defend Donald Trump's abrupt dismissal of FBI director James Comey. (Comey, lest you forget, was leading and expanding upon an investigation into the Trump administration's ties to Russia.)

Many speculated that Conway had disappeared because she was becoming more of a liability than an asset to the White House, what with her highly unethical promotion of Ivanka Trump's clothing brand and her outrageous spinning of the truth into what she termed "alternative facts." And this might be true! Who cares, really, why we got a few blissful Conway-less weeks. We got them. And now they're over. (Not that we could really enjoy them because of every other insane and terrible thing that happened as the result of the Trump administration.)

But so, Conway popped up in order to talk with Anderson Cooper on CNN about Comey's firing, and while she replied to a question of Cooper's, he could be seen rolling his eyes. This took place when Conway started rambling on about Trump's decisive victory in Michigan over Hillary Clinton (man, the Trump team really wishes that being president actually just consisted of one long campaign, doesn't it?), and it's pretty clear that Cooper rolled his eyes because Conway was deflecting his pertinent question of why Trump praised Comey's handling of Hillary Clinton's emails in the past but was now using those  same emails as the reasoning for firing him. Personally, I don't really see how Cooper's eyes haven't permanently lodged in the back of his head based off all the times he has had to interact with Conway, but no matter. He rolled his eyes at a person who was being evasive in her responses to his direct questions, and that was that. Right?

Wrong. Because, today, Conway appeared on Fox & Friends and said that the reason Cooper rolled his eyes was "sexism." Before complaining about how often she is a victim of sexism, Conway made a point of deriding Clinton's supposition that sexism played a role in her electoral defeat, saying, "Hillary Clinton is in search of sexism as a lame excuse for why her disastrous candidacy and campaign lost six months ago. I face sexism a lot of times when I show up for interviews. Could you imagine rolling your eyes, having a male anchor on a network roll eyes at Hillary Clinton or a female spokesperson for President Obama or President Bill Clinton? I think not.”

Hmm... maybe not, but I can pretty easily imagine massive crowds of people being riled up by members of the Trump administration—including Trump himself—into chanting "Lock her up" about Clinton, and interspersing that chant with cries of "Burn the witch." (And worse.)

But the main reason I can't imagine Cooper rolling his eyes at Clinton or a female spokesperson for Obama is because, as much as a certain amount of disingenuousness is expected from politicians and their representatives, the base level at which Trump and his cronies—including women like Conway, like Sarah Huckabee Sanders, like Ivanka Trump—operate, one full of lies and evasions and absurd provocations, is one which tends to elicit—at minimum!—an eye roll or two.

This does not mean Cooper is sexist. It means that Conway lies and obfuscates at a level which needs to be called out; not because she's a woman, but because she's a horrible person, whose own self-interest, as well as those around her, is all that matters to her, never mind the fact that her actions are contributing to an America in which millions of women stand to lose access to health care, a problem that is, actually, very sexist indeed.