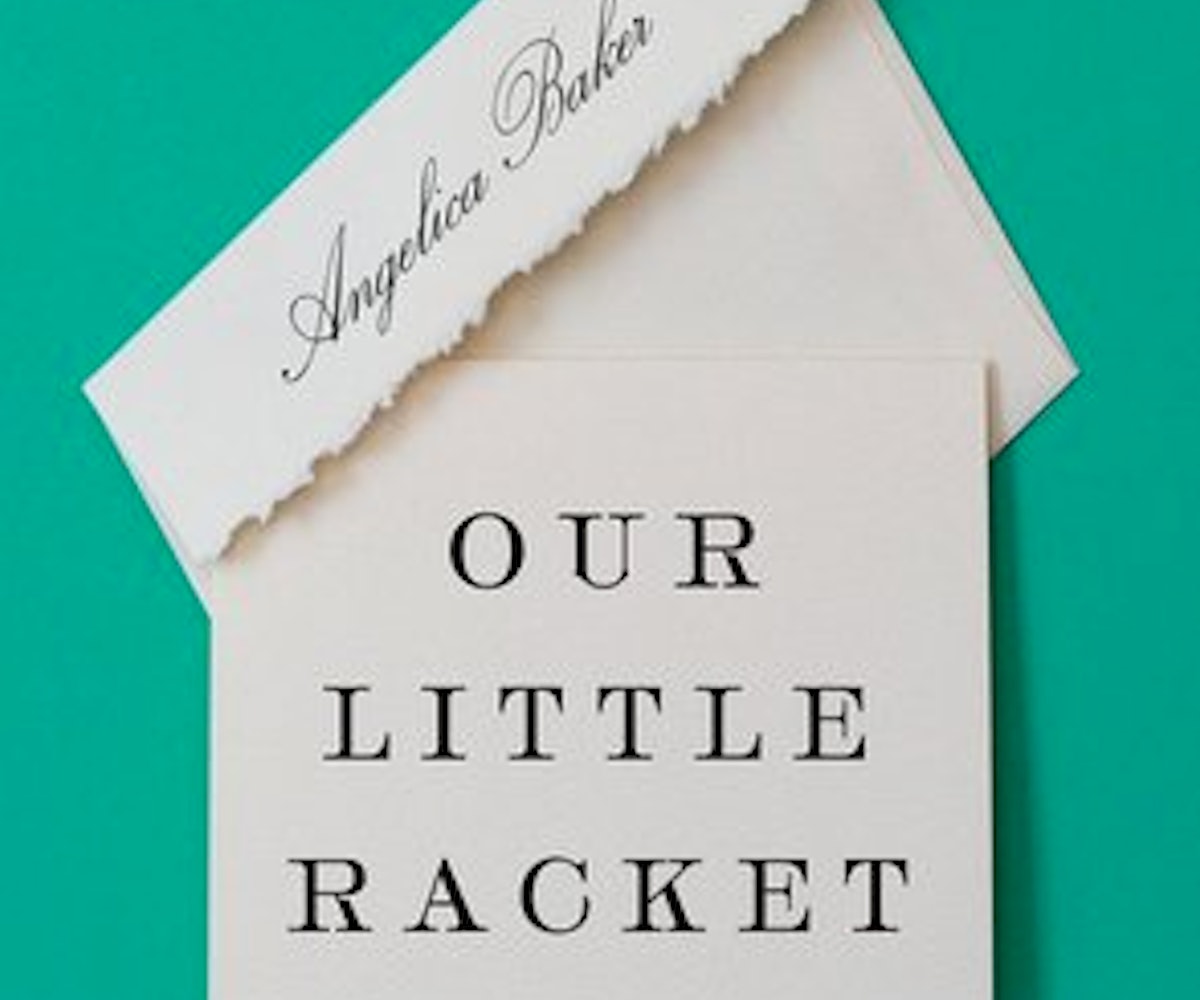 It's said that if you meet someone in New York City, the first thing they'll ask you won't be a question about who you are, but rather about what you do. Of course, in New York (and, let's face it, much of America) what you do is a major way most people define who you are, and it serves as a shorthand for understanding what people are like.

Perhaps no industry has a more familiar shorthand than finance. Or, as Angelica Baker says to me as we meet over coffee to discuss her excellent debut novel Our Little Racket, "If you meet somebody now, it’s like, 'Eh, I’'m in finance, I sold my soul.'" It wasn't always like this Baker points out; prior to the financial collapse of 2007-8, and the nationwide realization that, Oh, hey, maybe all these Wall Street guys aren't looking out for anyone but themselves, because maybe American Psycho had some truth to it, finance was viewed as "just a job that they got that everybody wanted."

That changed dramatically a decade ago, with the housing collapse and the massive bank bailouts, to say nothing of the way in which the emergence of cultural villains like Bernie Madoff, who stole millions of dollars from investors, made the public view the finance industry as being filled with, well, cretinous liars. And while we might not want cretinous liars to be in charge of our country's economy (or, just, like, our country), it certainly is fertile ground for a novel. Enter Our Little Racket.

Baker's debut revolves around the downfall of CEO Bob D'Amico, whose investment bank has collapsed, sending shock waves throughout the Greenwich, Connecticut, community in which he lives. While those waves are undoubtedly felt by everyone in their vicinity, the narrative shifts between the points of view of five of the women who feel them the most profoundly: Madison, Bob's 15-year-old daughter; Isabel, Bob's wife; Mina, Isabel's confidante; Amanda, Madison's best friend; and Lily, the D'Amico's nanny and Isabel's assistant. Each woman gives a different perspective on the ways in which they feel betrayed, as well as how they feel responsible and even complicit for the perpetuation of an untenable situation. Baker astutely navigates the tricky terrain of the incredibly wealthy, bringing an intimacy and empathy to characters and situations that feel alien to all but the 1 percent.

Below, Baker and I talk about why this was a story she wanted to tell, which character's perspective she found most difficult to inhabit, and who she thinks should play Madison in the TV series that I personally really want to have happen.

Part of it was that I was in college that year when Lehman Brothers and all that stuff was going on. I was never gonna get a job in finance, but a lot of other people around me were. And people were waiting to see if that whole industry was going to change, and then, obviously, it didn’t. So everyone held their breath for a while and then went back to normal, and I sorta got interested in that dynamic. When I started writing this book it was four years later, no one had gone to jail, and I was interested in that idea, how we all thought that this was gonna change the way that we look at this whole part of our society, and it really didn’t. And then I started thinking it more interesting to think about what if this was somebody that you loved and that you were really close to, and what you felt like you have learned. And then nothing actually having changed and you not actually having learned anything.

So initially I thought of what would it be like if you were a teenager and this was your father? So I started writing something that was in the first person about Madison, and it had a lot of problems—[it was] repetitive and it just kinda felt like there wasn’t really anywhere for it to go. Then I had lunch with a former professor, and he was like, "I wonder why you would choose just one person?" And so I started writing in the third person and I kinda just kept adding in people and then eventually it became clear to me that I wasn’t adding any men. I didn’t want to add anyone who knew what was going on from the inside completely; I didn’t want people who I felt like had one foot in and one foot out.

Which character did you find the most difficult to write from the perspective of?

Isabel. Definitely, Isabel, because, I think, it’s difficult to evoke someone who is closed off from the people around them but is also somewhat closed off from herself in some ways, but also show that kind of raw part of her, because she's alone. She is the person that people come to the book with the most knowledge of, I think, because she’s the wife. Most people who read this book have a very good idea of a rich guy's wife in that situation, and so I think it was important to me that she be a little more interesting. She’s made the decision to be where she is, she’s not like the teenage girls in this book who grew up in it. She made a decision to be there, but, at the same time, she's in a situation that's developing in one direction, and she didn’t see it until too late in the game. So it’s not like I wrote this book to be like “don’t be mean to the wives,” but I do think there's is an aspect of her situation that is upsetting, and you can see how she got where she is, hopefully.

You definitely avoided making anyone into a cartoonish villain, which can be tempting when it comes to finance people. And yet, you do reveal that there are guilty parties here, even if there wasn't any evil plotting. Did you always know it would pan out that way?

A lot of people refer to Madoff in talking about the book, and that’s very different to me [than what I wrote about] because he's much more of a Shakespearean villain to me; he was literally like, “I’m stealing your money.” This was about the idea of what was going on at the investment banks, where it was bit by bit by bit; I doubt that there was a meeting at Lehman Brothers in 2006 when they were like, “We’re just gonna ride this train until it collapses.” It was—and I think that’s why so many people bought into it—much more ambiguous. I knew I didn’t want it to be a big criminal thing, but however far from the time I went, it was not going to end with [Bob D'Amico] in jail. So that I knew pretty clearly. I think that it was clear to me that he would have done stuff wrong.

Once I knew that was important, it was like, "Well, the core betrayal in this book is going to be Madison’s parents of Madison." She thinks of her father as her person; she’s like, “I’m his confidante,” and he’s been using her to make himself feel better, and that’s really gross and upsetting.

Yeah, I found I didn’t instinctively want to hate him, and it really took a while, but it was through seeing how he treated his daughter that he became really loathe-worthy.

I think if you write him off across the board from the beginning of the book, it’s just not that interesting to read then. You’re reading about these people orbiting him, and while he’s not important to everyone in the same way, he has to be important to his daughter. It was important to me that Bob not be uninteresting, because I think that makes the women around him less interesting too. You want to feel you’re seeing him, something about him that other people don’t know. I think that it's important for the book to mimic the way we all felt about people like this for a long time. It kinda became fashionable to be like, They became criminals in 2008," but that’s not how we talked about that industry really for the 20 years before that, even when there were criminal things.

Lily was also such an interesting character because she was a true outsider to the massively wealthy world the rest of the characters were either born into or had lived in for a long time.

I don’t feel that she’s necessarily similar to me as a character, but that’s the role I’ve come closest to being in in my life. I worked as a nanny, as a tutor; I’ve been in the home and the lives of families that are not my family. I’ve never been full-time caring for children, and I’ve never been as close to a family as Lily is in that situation, but she was interesting to me because she’s the outside, she’s choosing to be there, she does not have to be there. I think you understand how she feels about the children, you understand why she’s reluctant to leave them to their own devices. She doesn’t have to be in this house, but she’s decided to be there. I think she’s also a useful stand-in for us, in that she judges very harshly and then lets herself off the hook. I think that impulse is not a very great one, to be like, “Well I would never behave this was in that situation” or, “ I don’t think about money this way so I can’t be a part of this whole machine at all because I know better.”

I think this would be an amazing TV series or movie; have you cast anybody in your head?

Isabel is very hard to cast; I don’t know honestly. It’s maybe easier if she’s not blonde. Somebody said Jennifer Connelly, and that’d be awesome. And then for Mina, my friend said Sarah Paulson or Jennifer Aniston, which I think would be actually crazy.

I think that would be so great, like a career renaissance for Jennifer Aniston, like Big Little Lies was for Nicole Kidman.

It’s also funny that Big Little Lies came out—and renaissance is not really the word because those people were all movie stars—but I don’t feel like Nicole Kidman has had something that interesting to do in a really long time and then there was this incredible part for her. Even Reese Witherspoon, I love her but I don’t think she’s had a part like that in years. It was funny because we were like, who else…

The only person I was thinking of for Madison is Reese Witherspoon’s daughter. Does she act?

Oh my god, perfect. That’s so funny. And Brie Larson for Lily.

Our Little Racket is available now