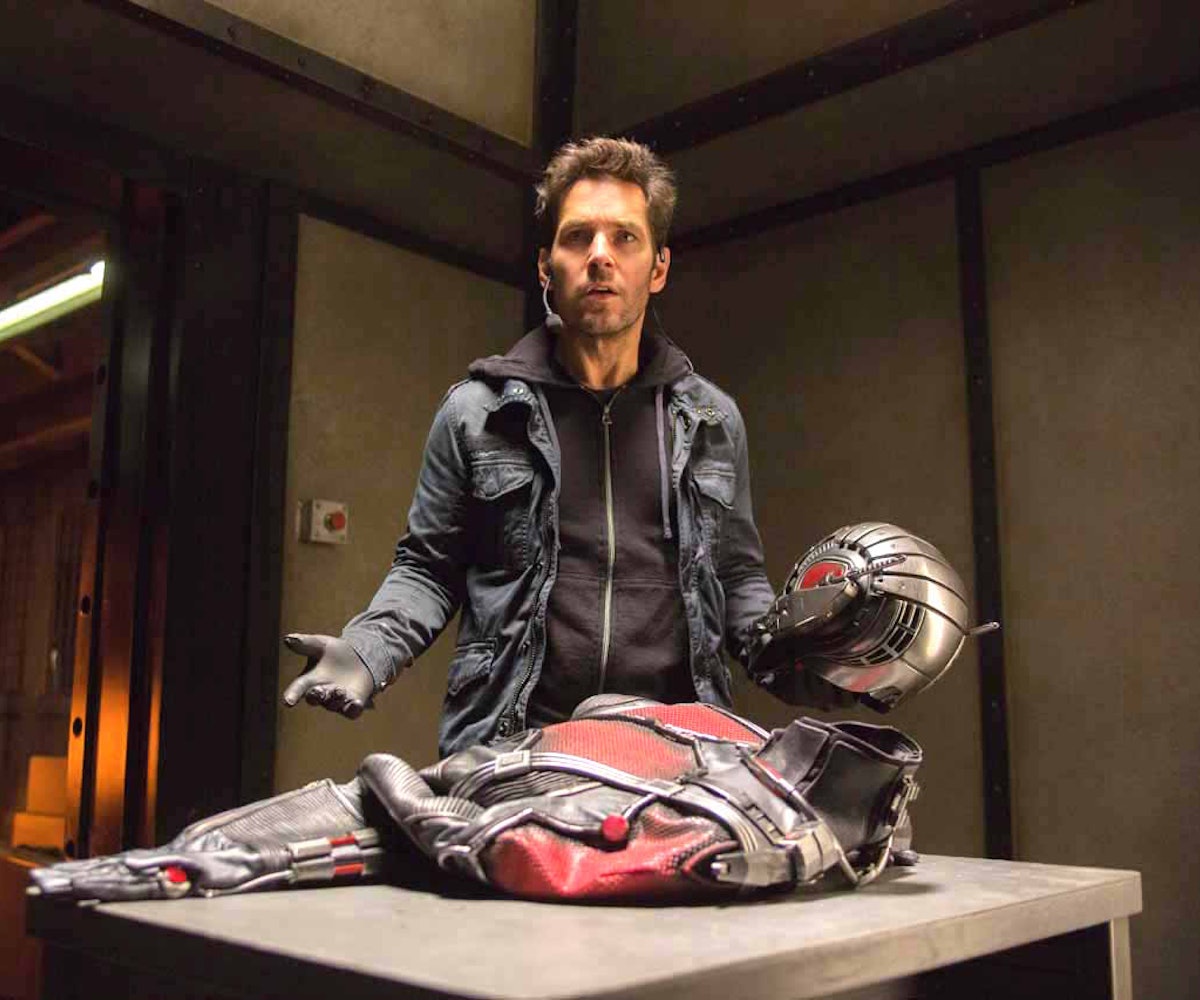 Look, we’re not going to sugarcoat this one: Ant Man is not a good film. It might even be a bad one. As much as it pains us to say that a Marvel movie starring Paul Rudd somehow magically failed to work as a unified whole, there it is.

But the issue isn’t whether Ant Man is a good film. The issue is whether you should plunk down cash money to see it in 3D this weekend. We say, go for it—just know what you’re getting into.

Let’s break it down: Thanks in large part to departed director Edgar Wright (Shaun of the Dead, Hot Fuzz) and Marvel’s efforts, Ant Man boasts a truly sharp, engaged cast (Rudd, Michael Douglas, and Corey Stoll), touching moments of parental love, and gripping, innovative special effects. Even Evangeline Lilly is good, and she’s Evangeline Lilly. With appearances from one loveably cocky Avenger, the constantly hilarious Michael Peña, an army of cute and not at all gross digital ants, and a trip to Marvel’s charming, well-constructed world, all the pieces are in place for something great to happen.

But then there’s that script. Hoo boy.

As has been much discussed, Marvel dismissed Wright and his regular writing partner Joe Cornish over creative differences, replacing them with director Peyton Reed (Bring it On), and leaving the script to Adam McKay (Anchorman: The Legend of Ron Burgundy, Step Brothers) and Rudd. Perhaps ditching Wright and Cornish was a necessary corporate move, but Marvel’s choice of replacements proves to be a poor one. But bear with us.

Though Reed is capable at weaving Ant Man’s brilliant effects sequences with real-world environments, he, McKay, and Rudd have executed a script that echoes the most hackneyed, ramshackle hero films of the 1980s. While played ably by the talented Stoll, the lead villain lacks motivation, the main caper is convoluted, and the film constantly puts on the breaks for reams of boring, uninspired exposition. Again and again, Ant Man stops to explain the plot, to explain the stakes, to explain, explain, explain. Also, even with all the assembled comic talent in front of and behind the camera, so little of what comes in between the explaining is actually funny (though not for lack of trying). But just hold on a moment.

You’d think with all that explaining, Ant Man had a hefty plot. It doesn’t. As you should have guessed from the previews, Douglas is a crotchety ex-hero responsible for the Ant Man technology, Stoll is the industrialist who is using the tech for evil means, and Rudd is the cat burglar enlisted to steal it back—which happens. That’s it. Ant Man stretches 60 minutes of plot over two hours of very slow going. It even takes 30 minutes for something exciting to happen.

Oh, but when something exciting does happen, Ant Man pretty much justifies the price of a 3D ticket.

Whenever Ant Man shrinks its hero down to insect size, it’s brilliant. A bathtub becomes a nation onto itself, circuits are tree trunks, and rugs great plains of wheat. In a sequence that’s unfortunately been spoiled in almost every ad for the film, a Thomas the Tank Engine toy becomes the set piece for a joyful train-top pursuit. These moments—and there are too few of them—seem pulled right from your childhood daydreams. Imaginative and beautiful, Ant Man’s lonely, lovely little world shames so many other digital environments we’ve seen in recent blockbusters.

With them, the dedicated performances, and a few other elements we won’t spoil, you can see that with only a better script Ant Man could have been a film as fun and wonderful as E.T. or Goonies and certainly as good as any of Marvel’s many other projects. But it’s not.

As an afternoon of entertainment, however, it’s more or less worth the trip to the theater. Just get ready for long stretches of boring, pointless yammering and gaping plot holes.

There’s going to be a lot of talk in the next few days about Marvel losing its footing, about the end of the franchise’s winning streak. We don’t buy it. Thanks to a few peeks into its future offered by Ant Man, everything seems to be on track and reports suggest that Captain America: Civil War will be completely bonkers.

That said, Ant Man may be Marvel’s first film to open at number two at the box office (damn those minions). It would certainly deserve it. Perhaps most importantly, unlike all other Marvel films, we don’t see ourselves re-watching Ant Man again and again. Guess we'll just have to stick to Guardians of the Galaxy.

NEXT UP
Culture
The Madonna Biopic Is Being Scrapped
Culture
Kaia Gerber Won’t Stop Until She’s Cast As Patti Smith In A Biopic
Culture
The 2023 Oscar Nominations Full List Is Here
Nylon Nights
Latto Gets Ready for Spotify’s Best New Artist Grammys Party
Style + Culture, delivered straight to your inbox.