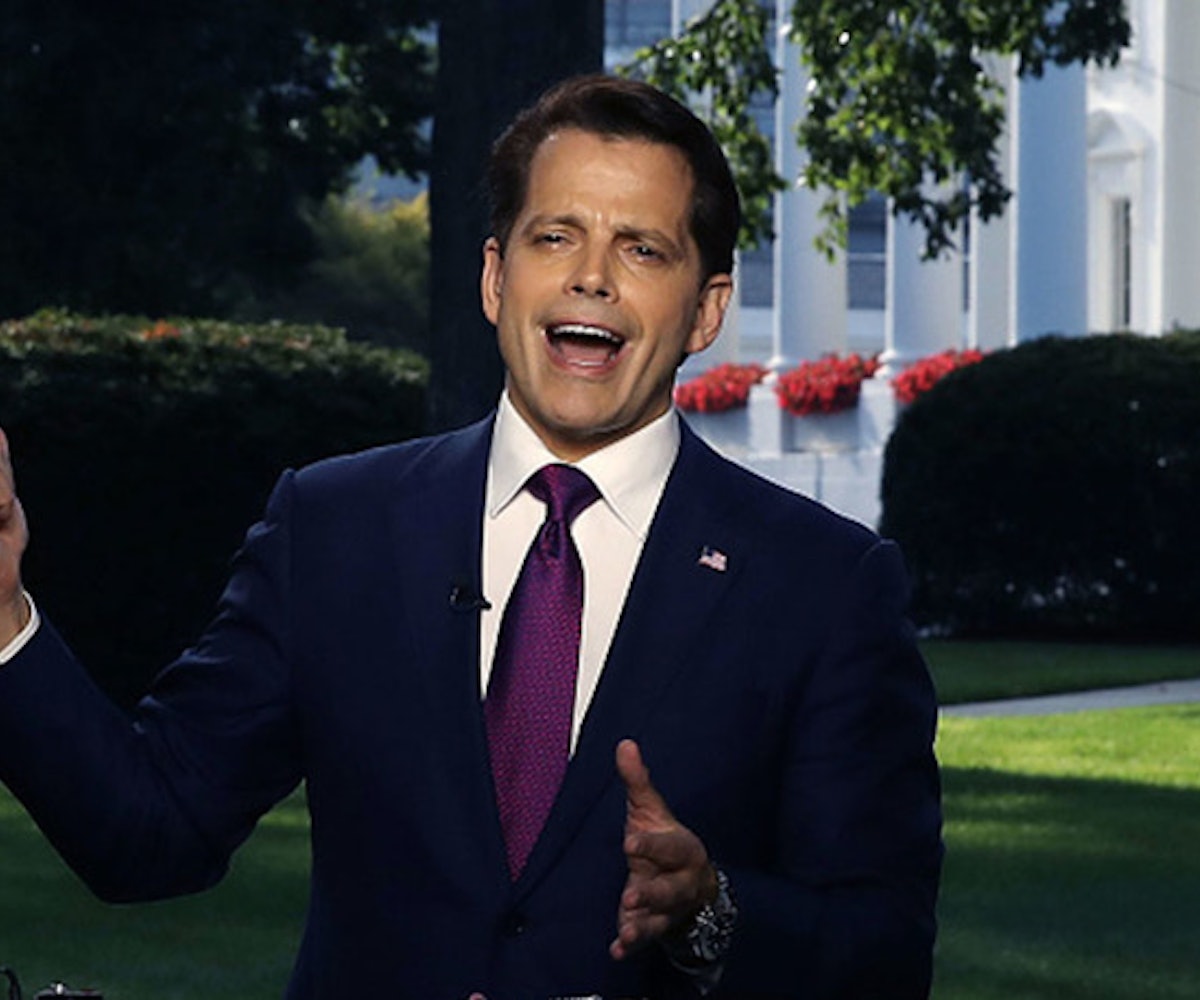 Just when you thought the horror show in the White House couldn't shock you anymore, new White House communications director Anthony Scaramucci called Ryan Lizza, of The New Yorker, and screamed the word "cock" multiple times. As one does. In a long, aggressive, and on-the-record phone call Wednesday night, Scaramucci went off about the suspected White House "leaker" and chief of staff Reince Priebus, the devil reincarnate and Trump's chief strategist Steve Bannon, and threatened to fire his entire communications department.

Wednesday night, Lizza tweeted that, according to a "senior White House official," Scaramucci was having dinner with President Trump, Melania, Sean Hannity, and former Fox News executive Bill Shine. He was curious as to what this gathering meant, wondering if Trump was getting strategic advice from Hannity or was planning on hiring Shine.

When Scaramucci saw the tweet, he called Lizza, and he was not happy. “Who leaked that to you?” he asked. When Lizza replied that he couldn’t reveal his sources, Scaramucci threatened to fire the entire White House communications staff. “What I’m going to do is, I will eliminate everyone in the comms team and we’ll start over,” he said. “I ask these guys not to leak anything and they can’t help themselves. You’re an American citizen, this is a major catastrophe for the American country. So I’m asking you as an American patriot to give me a sense of who leaked it.”

Scaramucci thinks that because someone told a reporter about the dinner, people in the West Wing, particularly Priebus, are plotting against him. Despite claiming they have no problems, Scaramucci and Priebus have been feuding for months. Trump initially asked Scaramucci to join his administration after the election, but Priebus blocked him from being appointed until last week. According to the White House's official announcement of Scaramucci's appointment, the comms director will report directly to the president, not Priebus.

“Is it an assistant to the President?” Scaramucci asked Lizza concerning the person who leaked information about his dinner. He again said he couldn't tell him. “OK, I’m going to fire every one of them, and then you haven’t protected anybody, so the entire place will be fired over the next two weeks.”

When pressed as to why this dinner must be kept top secret, Scaramucci said, "I’ve asked people not to leak things for a period of time and give me a honeymoon period. They won’t do it." Lizza writes that Scaramucci eventually convinced himself that Priebus was the unnamed source. “They’ll all be fired by me,” he said. “I fired one guy the other day. I have three to four people I’ll fire tomorrow. I’ll get to the person who leaked that to you. Reince Priebus—if you want to leak something—he’ll be asked to resign very shortly.”

Then, the clearly paranoid Scaramucci called Priebus a "fucking paranoid schizophrenic, a paranoiac." He imitated Priebus, “‘Oh, Bill Shine is coming in. Let me leak the fucking thing and see if I can cock-block these people the way I cock-blocked Scaramucci for six months.’”

At times, Scaramucci broke into the third person, as most hyper-masculine bros are wont to do. “The swamp will not defeat him,” he said of himself. “They’re trying to resist me, but it’s not going to work. I’ve done nothing wrong on my financial disclosures, so they’re going to have to go fuck themselves.” He was referring to a Politico report about his financial disclosure forms, which showed he could still profit from SkyBridge, the company he sold before joining the White House.

Shockingly, Scaramucci claimed he doesn't want media attention like other senior officials. “I’m not Steve Bannon, I’m not trying to suck my own cock,” he said. “I’m not trying to build my own brand off the fucking strength of the President. I’m here to serve the country.” One would think a good way to stay out of the media is to not say "cock" three times to The New Yorker.

Scaramucci then threatened violence against anyone leaking information to the press. “What I want to do is I want to fucking kill all the leakers and I want to get the President’s agenda on track so we can succeed for the American people,” he told Lizza.

The call ended by Scaramucci again breaking into third person and suggesting he had damaging information about White House aides. “O.K., the Mooch showed up a week ago,” he said. “This is going to get cleaned up very shortly, O.K.? Because I nailed these guys. I’ve got digital fingerprints on everything they’ve done through the F.B.I. and the fucking Department of Justice.”

He then abruptly got off the call by saying, "Let me go, though, because I’ve gotta start tweeting some shit to make this guy crazy.” The "guy" he was referring to was Priebus. Shortly after, he tweeted, “In light of the leak of my financial info which is a felony. I will be contacting @FBI and the @TheJusticeDept #swamp @Reince45." Within two hours, he deleted the tweet and explained to CNN that he only tagged Priebus because he wants to work with him to stop leaks, not because he thinks he's the leaker.

Thursday morning, the reporter of the Politico story said the financial document she used was publicly available and she'd obtained it from the Export-Import Bank. So there's really nothing the FBI or Department of Justice can do about that.

“Let me tell you something about myself,” Scaramucci told CNN viewers. “I am a straight shooter.” Sure you are, Mooch.