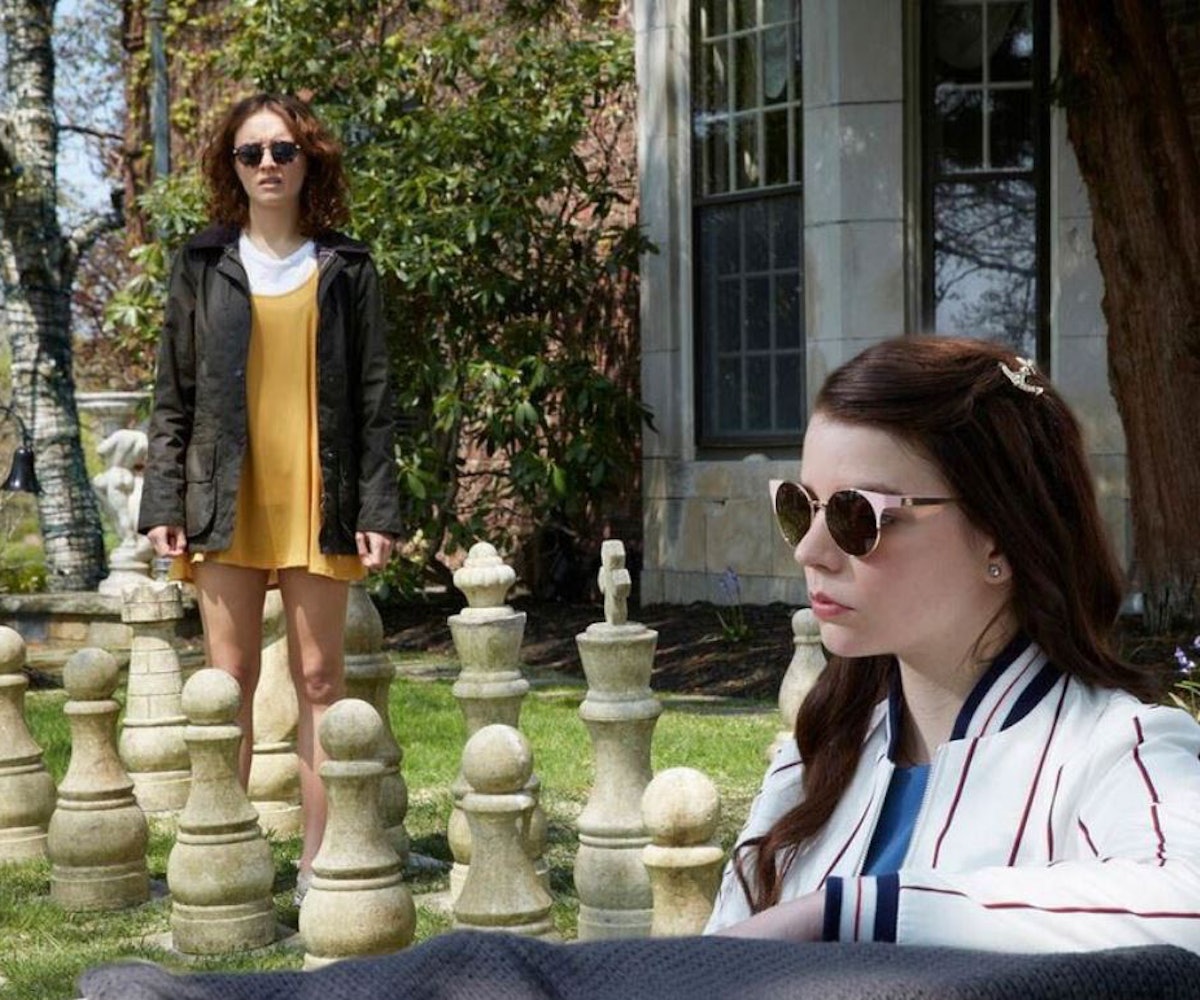 In 2015, two young actresses, Anya Taylor-Joy, 20, and Olivia Cooke, 23, turned the Sundance Film Festival into their own coming out party. Taylor-Joy starred in the foreboding period piece The Witch, one of the best horror movies of that year, while Cooke played one of the title characters in Me and Earl and the Dying Girl, which went on to win the top two prizes at the festival. Casting directors around Hollywood were put on notice. Since then, both actresses have lived up to that initial promise, with Cooke, a regular on A&E’s Bates Motel, recently wrapping a major role in Steven Spielberg’s virtual reality odyssey Ready Player One, and Taylor-Joy starring in the number one movie in the country, M. Night Shyamalan’s Split. But it’s their starring roles in the stylish psychodrama Thoroughbred that solidifies Cooke and Taylor-Joy as two of the most interesting actresses of their generation.

The movie, which premiered last week at Sundance to universal praise and marks the debut of writer and director Cory Finley, stars Cooke and Taylor-Joy as Amanda and Lily, childhood friends who become estranged after Amanda commits an unthinkable act of animal cruelty and becomes socially ostracized. When we meet them here as teenagers, Lily is the seemingly perfect upper-class girl who studies hard and clashes with her asshole stepfather, while Amanda admits that she feels nothing but fatigue and hunger; the spectrum of human emotions do not apply to her. What follows is an extremely tense and often funny battle of the wills, as the girls grow perilously closer and it becomes clearer that this rekindled friendship will lead to a bloody final act. Cooke and Taylor-Joy clearly relished playing these complicated characters, and their excitement over the material was palpable when we sat down with them last week in Park City.

The way this movie looks and sounds is very unique and very specific. Were you taken by surprise the first time you saw it?

Olivia Cooke: Absolutely. I don't have the mind of a director. I'm not as intelligent as Cory Finley, and I never watched playback, so what I envisioned in my head was a way more juvenile. So I was bowled over when I saw it.

Did you have any idea what it would sound like? Because the music really works to amplify the tension in the film.

Anya Taylor-Joy: The music is brilliant. I mean it's sparingly used, but when it's used it's a real kicker. One of the producers actually came out of the movie and he was like, "Wow, that's exactly the movie I thought we were making." I think tonally and vibe-wise, completely. But again neither of us really watched playback. That being said, it's like, you read a script, you fall in love with it, you fall in love with your characters, you do it, and then as actors you just sort of leave your baby with other people and trust them to elevate it. When you're working with such incredible artists, you know they elevated it to something that was far beyond my imagination. It really transcended anything I thought it was going to be.

A big part of acting is having empathy for your characters. But Olivia, you’re playing someone who is incapable of feeling any emotion. Was playing her a challenge?

OC: I know! And I always have so much emotion with all the movies that I've done. I'm always really crying and snotting off. So it was really nice to find a character with whom I had to work within a very, very limited range, but also keep her aligned and keep her deadpan, and keep her empathic. And I really enjoyed playing her, I just thought it was so fun. She's just so brazen and she says what she thinks. She has no inhibition, she's got no vulnerability, she's never insecure. I mean, she just is.

Did you sit down with Corey and go through these characters' backstories in order to understand them better? Because for most of the movie they’re quite mysterious.

ATJ: We had three days of rehearsal that we were really lucky to have, because obviously when you guys are watching the film, you're seeing the reunion of two friends that have been estranged, but we needed to know what our history was prior to that. So we read through the script a couple of times and really sort of fleshed out some memories.

Why were you so lucky to have three days of rehearsal? Is it that rare?

ATJ: Rehearsal in general is rare.

Is that because of scheduling?

ATJ: I never realized, but I think I've actually had rehearsals on all my movies. I can't imagine doing it any other way because you have to build that trust to be able to go into a space and allow yourself to be completely vulnerable, and if you like the person—you know, I'm a lover—so if you love the person and you're in that space with them, you end up going to places that you never even thought you could get to because they create that space.

OC: I've been on a TV show for five years, and so when someone comes in and they're playing your boyfriend, it's just like “hiiii.” It's mortifying. It's awful. I hate it. It's just inorganic. You don't go up to someone in real life and start kissing them. They've got germs and you don't know where they've been and you don't know them. It's disgusting.

Were you two friends or familiar with each other’s work before making this movie together?

OC: I knew your work; I watched The Witch. I really thought it was brilliant. I thought you were brilliant.

Is this the first time you’re telling Anya that?

OC: I told you that when I met you.

OC: I was really excited to play her opposite Anya. I've been trying to do another two-hander with another strong female.

ATJ: Likewise. And I think the fact that we were both at Sundance the same year, and you know, I met [Me and Earl and the Dying Girl star] Thomas Mann, I think my first day ever in L.A., I ended up at his house really randomly, and I was like, "Oh my god, you're the kid from Sundance! I was at Sundance too! We have a connection!" And so when I heard it was Liv I was so excited, because I knew that she was a phenomenal actress and I just thought the idea two young women going up against each other in this manipulative, sort of dark film, I was really excited. We have a similar way of playing with each other where we surprise each other on set. We're basically reactive. Anything that she gave me on set, I gave it right back.

What is Sundance round two like for you guys, compared to round one?

OC: So much nicer.

ATJ: So much more relaxed. I feel like I can actually breathe this time, and Liv was saying that the perception of Sundance is that you’re going to get to see all these movies, and you're going maybe hit the slopes, and make snow angels and shit. And in reality, it's like, no, you go from room to room to room and unless you plan it out you don't get the time to enjoy it. So this time I think we're both a bit more like, [exhales].

OC: There's a combination of trying to have a bit of social life after doing press, and with the altitude all it takes is one drink. I saw Jeffrey Tambor on the street and I love Transparent so much, and I was like, "Jeffrey! I loved you in Transcendence!" [laughs] Now we're very relaxed. I remember being so panicky doing an interview and so worried about what I would say.

Did you try to understand the mental state of these characters from a medical or scientific perspective? Because we see symptoms of psychopathy.

ATJ: Um, I know that Liv did and I'll let her speak to that, but I think Cory's script was just so fleshed out and I don't think Lily would ever put herself in that category. She's too perfect. I couldn't think about it that way. I was just trying to achieve this level of consistent bubbling tension underneath this mask of neatly pressed bows and bunny T-shirts. That's what I was focused on.

OC: I went down the path of researching various mental illnesses, but then I realized that Amanda has been diagnosed with every mental illness under the sun. It’s just such a massive umbrella that I then decided that her emotions had been repressed by herself or something that happened along the way. And it's a control thing, as well. When something happens to her in the end when she's inebriated, that's the first glimmer of vulnerability. There are no inhibitions and she's not in control, and that's the first glimmer of the emotions that are buried way, way, way, deep within her.

Olivia you just finished working with Steven Spielberg on Ready Player One. How did working with a first time filmmaker like Cory compare to that?

OC: Honestly, Cory commands himself with the most confidence, as if he has the most experience and there isn't really that much of a difference. Also, when you've got that much talent like Steven Spielberg and like Cory, you're not fearful that your pride is going to get hurt. You don't throw around your power and neither of those people do, and Cory is exceptional at what he does.

And you came on this movie similarly, you met with him?

ATJ: I read the script and I fell in love with it instantly and just was like, I need to play this role. I met Cory at a hotel in New York. We had a great conversation, and we really, really liked each other, and I remember at the end of it, he was like, “This has been so great getting to know you, I really hope we work on something together at some point.” And in my head I was like, At some point? No, no this one! This is my one! And as soon as he walked away I was like, okay, I can't follow him because he hasn't told me I've gotten the job and so I went into the bathroom and tried to compose myself and luckily he didn't take too long in calling me back, and being like the role is yours. But when you have that feeling that you need to play it, it's quite desperate.

OC: Typical Cory, to not tell you in the room.