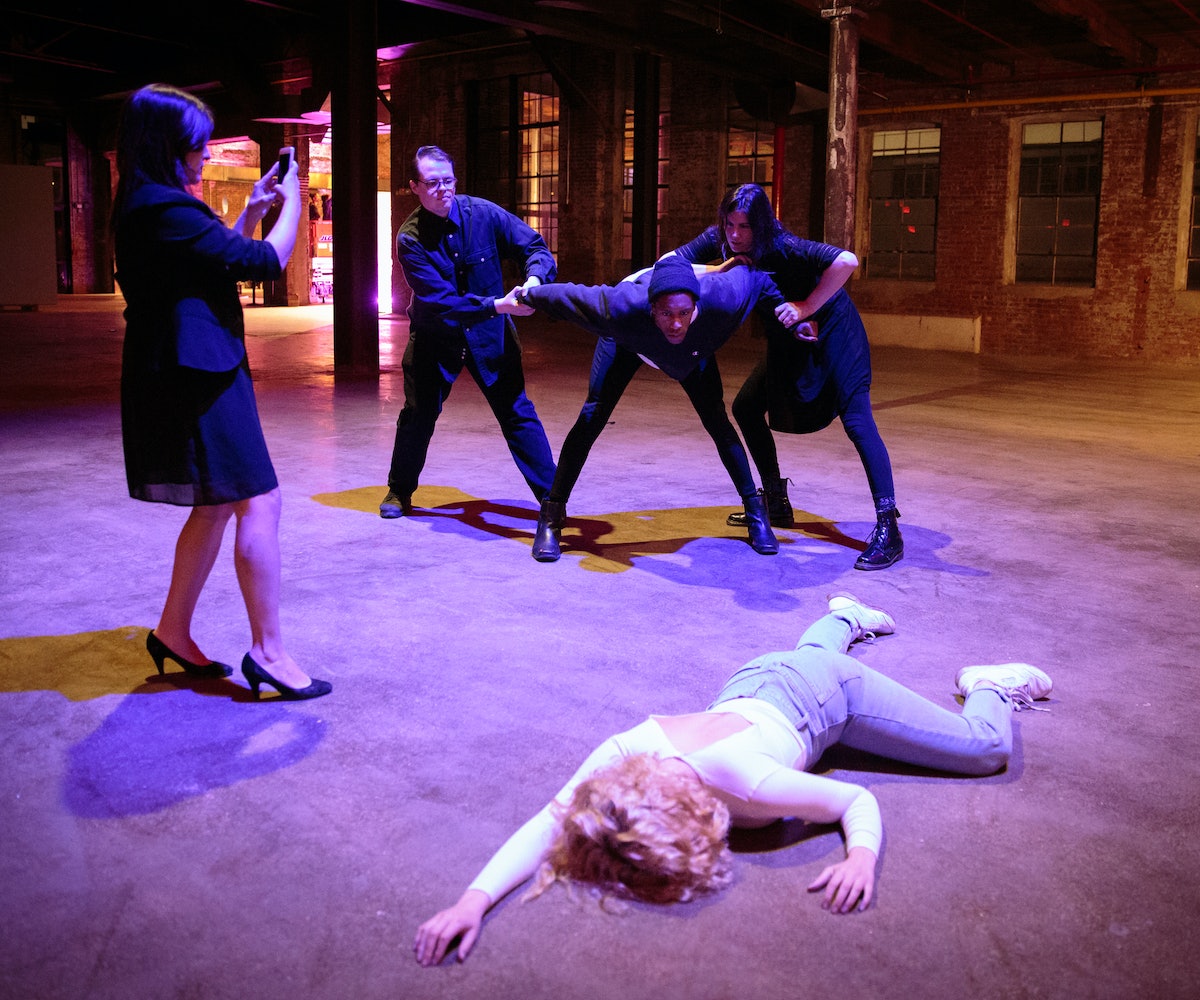 Lana Del Rey once said that "life imitates art," but the opposite tends to be more common in reality. Monica Mirabile and Sarah Kinlaw further explore this concept as they examine the relationship between authority and obedience in a variety of forms through their social psychology experiment "Authority Figure." On the nature of the performance, Mirabile said that "the severity of 'Authority Figure' developed from reflecting on what’s happening in our current political climate."

"I often work within the realm of control, and our concepts generally have to do with control—what is control, how you gain it, and how it’s taken from you," she added. "I’m thinking more about how to incorporate what I do as a choreographer with what I care about as a person, and so these things sort of just started to develop into this project."

Around 150 people were cast to perform in "Authority Figure," and that number doesn't even include the rest of the collaborators. A few familiar names from that long list include choreography by Sigrid Lauren (Fluct), India Salvor Menuez, and Richard Kennedy; installations by Jen Monroe (Bad Taste), Ilana Savdie, Kathleen Dycaico, Jerome Bwire, Signe Pierce; and original music scored by Dev Hynes (Blood Orange), Caroline Polachek, SOPHIE, and Dan Deacon.

Kinlaw said that they "specifically brought people on board that we knew personally and could trust, as well as those whose work and ethos we respected." Both Kinlaw and Mirabile recruited friends from the art community to be a part of this project so the amount of support has been tremendous, and allowed everyone involved to be comfortable growing into their vulnerability. "There are so many people involved and there are so many different perspectives, and they’re all being represented in this project, but still it’s a small group," said Mirabile. "So the ways that we’re affected most greatly from obedience and authority are determined by the individual."

"One of the interesting things is that all these musicians are really operating outside the body of their more pop practices that they’re known for," added Polachek. "I think everyone is really using 'Authority Figure' as a way to step outside of their repertoire and play with something else."

Polachek mentioned that she was really drawn in by the fact that the project is undocumentable. "You can’t take a picture of it or take a video of it or record it and put it online in a way that captures it at all," she said. "I think this is a really important time for this medium to end up in the underground. I’m very honored to be a part of it."

The music that Polachek arranged for this performance comes from material that she created for her Ramona Lisa project. She describes it as minimal meditation music with the intention to "elicit a very physical reaction in people" beyond the element of dance. "I honestly couldn’t invent a more perfect place for these to end up," she added.

"I feel like explicitly mentioning that this is not about criticizing authority," said Polachek. "It’s about captivating the ways in which authority and obedience end up in lots of parts of our lives."

Mirabile is fully aware of the stigma against political art as it is often viewed as something inaccessible and unrealistic because "it doesn’t give change justice on a tangible level." With "Authority Figure," she expressed that she's not trying to change the world—she's engaging in a conversation about its problems in a visual format. One thing in particular that Mirabile highlighted about the quiz is the fact that people will be informed about the ACLU app which can be used to record police conduct, specifically incidents of stop and frisk. On the purpose of this performance, Polachek said that it's more about "trying to point out threads that run through the fabric of our lives."

"Performance is what we do. Choreography is about mobilizing and motivating the body to be physical and to be aware of what it’s doing. This performance is dealing with this psychology of our agency, and how we gain and maintain agency," Mirabile explains. "There’s that term, 'performance is political.' It starts with psychology, and through working with all these people, it is creating some kind of social psychology that does mobilize people."

Kinlaw also shared a similar sentiment about the performance. "When you look into concepts like obedience and authority, it's clear early on that dynamics are complicated, multitiered, and often very personal," she said. "While immersive performance is a medium we both work in, 'Authority Figure' embraces specific psychological avenues of feeling without trying to force a specific thought process or agenda onto the audience. As a participant, you're given both direction and opportunity for free choice, all of which will determine your specific experience."

"There's a helplessness that comes with living in a rigid system that often disregards personal, intrinsic needs. I feel caught up in this at times," she added. "There's also the issue of voice—when to speak out, and how?"

Kinlaw said that it has been incredible to watch their idea grow into "such an expansive and encompassing project." Mirabile wants this experience to make people realize that performance art and choreography have the potential make a positive impact on the human psyche on a therapeutical level, and to challenge the way that people think on a political level.