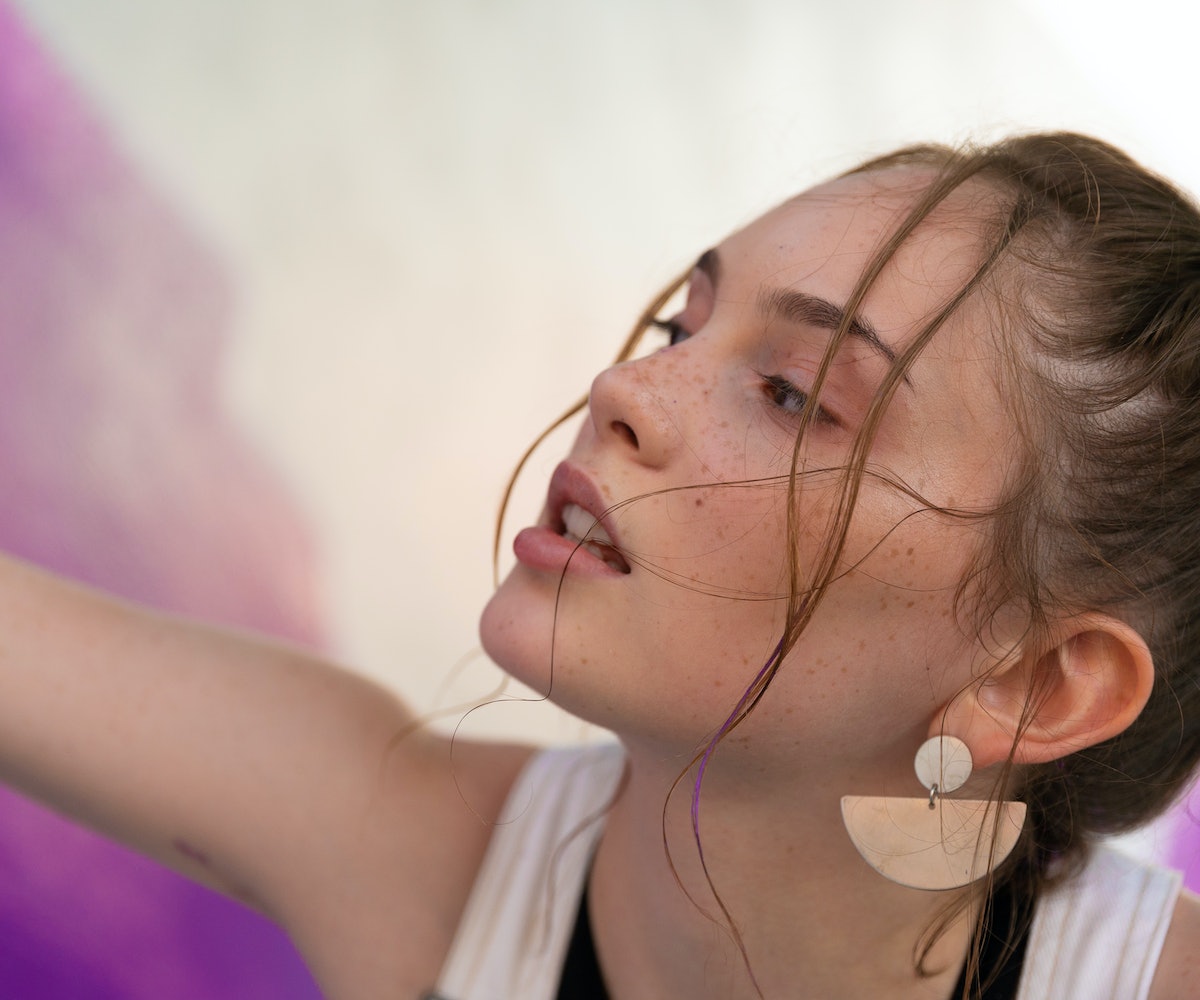 Autumn de Forest started painting at the age of five, when she found out by a “happy accident” that not only was it something she loved to do but something at which she was instantly good. Now, at age 16, de Forest has already sold over $7 million in paintings, worked with Michelle Obama on the White House Committee for The Arts and Humanities, and is on her way to establishing a charity to help young artists save for college.

Below, I talked with de Forest about her work with the Obamas, the Autumn de Forest Foundation, and her first mural which she unveiled today in partnership with hair care brand Aussie.

How did you start painting? What sorts of things inspire you?

I started painting very young. It honestly really happened as a happy accident—it was really just messing around and having fun. I just started creating, and I learned, the more I did it, how much joy it gave me and how passionate I was about it. And the more I did it, the more I found inspiration in the art world, just finding artists that really captured some of the styles that I wanted to emulate—and as I continued, more people started to notice. At the age of eight, I was featured on the Today show. I was never really afraid to look into a camera lens or talk to a huge crowd of people. I was just kind of sharing my story and sharing about what really drove me in life and what inspired me.

Do you mainly focus on paintings or do you experiment with other mediums as well?

So far, I have just been doing painting. This is my first mural, in Wynwood, which is so exciting, although that’s more or less painting on a surface. But I really do love experimenting with three-dimensional objects. I have experimented with wire before, kind of sculpting, if you will, with wire. So far [just] painting, but in my new collection, which kind of coming here and there, there will be some three-dimensional works maybe.

What was your inspiration for this mural and what is the kind of message that you hope it sends out?

I’m really honored to be partnering with Aussie [for this project]. They have really expressed how much they want to send this message of positivity, and just radiating this image of loving yourself and living through your own color. I think your hair is something that really expresses you as a person. It obviously frames the face, but it is so much more than that. It complements your style, it complements you—if you yourself are a piece of art, it can be your frame. So it’s very important. [Aussie] just wanted to really extend out this message of positivity and love and self-expression, and really challenge this image of a beauty standard or one way to style yourself.

That’s a little bit of the inspiration for me, and that’s why I wanted to use some brighter colors and really use this sense of pop art, a little bit of a neo-pop sense with the style. The image is of an actual sunset, but it’s utilizing different things. It’s utilizing the Aussie shampoo bottle and also mixing in this kangaroo, which is the Aussie kangaroo. But, it’s almost a collage sense of an imagination. It’s almost a dream of a more positive world, of a more open world, and that’s one of the things that I really wanted to emulate through the visual aspect of the mural.

It’s the first piece of street art you’ve created. Have you enjoyed that and how does it break from what you traditionally do?

It is, it’s all an adventure, and I’m having fun with it. Usually my works are on a very big scale, so the actual canvases are on a large scale, but obviously nothing this large. The last few days, we’ve just been trying different things, and it’s so funny because, beforehand, we were trying to plan out what exactly we were going to do and the technique, and I was like, “Alright, there’s no way we’re going to be able to know this until we actually get there.” Like, five of the things I had in mind did not work whatsoever once we got there. So I’m learning as I’m going on, and I’m very, very lucky to have a team with me that has been so helpful, and I’m having an opportunity to learn more, and that’s definitely such a great position.

How do you deal with the pressure of being an accomplished artist at such a young age, and how do you take advantage of your platform that you have?

I would say that I really chose this life. I think a lot of times when young people or kids are put in the spotlight, sometimes that can come from their parents or sometimes that can come from another third party. But that really wasn’t the case for me. [Being an artist] was definitely my choice and it’s something that I wanted to do the second that I started doing it. I’ve always loved being able to express myself through my artwork, and it was always an outlet where I was able to really portray my emotions on a visual scale.

I see some young people that aren’t exactly sure what path they want to take—and that can be wonderful—but, at the same time, I see some young people that are really making strides in the field that they’ve chosen, and they’re really able to express themselves so naturally and so organically in what they love. It’s so diverse, it’s such a range—it could be sports or the arts or writing or dance, or just anything that’s productive.

You also have a charity, the Autumn de Forest Foundation. How did that come about?

A couple years ago I started working with Michelle Obama. It was in the last administration, we got kicked out [by this one]. We were on the President’s Committee for The Arts And Humanities, created by Michelle Obama. They have really remarkable influencers like Yo-Yo Ma, Elton John, Kerry Washington, Misty Copeland, Usher—all of these really influential people. And they have them go out into underprivileged schools, and work with kids and talk about the importance of what they love to do, and I had the real privilege to work with them. I’m still working with them now. I’ve been able to go to about nine schools and talk about the importance of self-expression and arts in education. And as I was there, I was able to workshop with some classes of kids, and some of these kids’ paintings are really just remarkable.

So as I started doing that and as I moved to different schools, I wanted to keep that connection with the kids because it was so important to me, but also I saw, as I came back to the schools, that there was a huge influx of interest in the arts and in painting and in all kinds of visual arts, which made me so happy. That’s when I wanted to start the Autumn de Forest Foundation. It’s still very much in the works, it’s not up and running yet, but it’s a kind of online marketplace designed to give these young artists some recognition for their efforts to be creative, and they’re able to really share their artwork. It’s more of an Etsy kind of setup, where they can actually sell their own merchandise from the paintings that they created, and each kid would have a 529 account. We’re actually partnering with CitiBank in the foundation, and 80 percent of the proceeds go to an account for a college fund, 10 percent goes to the foundation that we’re partnering with, and then 10 percent goes to them straight away. So it’s a way for them to actually build for their future through a creative outlet.

Overall, I knew I wanted to change the world for the better with my artwork. That’s really been my goal. I’ve done paintings for different places that really have undergone some tough challenges, such as Haiti—this is many years ago, but they’re still recovering after the earthquake; Boston after the Boston Bombings, Las Vegas after the massacre there. I’ve actually created images and sent them to Washington, D.C. for the March for Our Lives, and many things just to help anybody in need through creativity.

What advice would you give young people or young artists who want to stand out from the crowd?

Find something that you love. Take anybody who’s successful—for example, Lady Gaga—she didn’t become successful from singing now and then and writing now and then, she became successful by doing what she loved every single day. Having that kind of commitment, especially at a young age, is so valuable, and it can take you so far. And I know that can be tough—sometimes we get caught up in daily lives—but being able to have that love and perseverance and passion for something that you love can take you up and beyond.

I think right now, especially for young people, we’re set up to succeed. Social media is a huge outlet to share anything, and if somebody really wants to promote themselves, they can be their own PR agent. They can help themselves by promoting their work, videos of their work, previews of their work, whatever it is. Having that passion to continue to produce and create, but also putting that out there and making sure that it’s known can be extremely valuable.

Who do you hope to inspire with your art and this mural specifically?

I really hope to inspire anybody—first of all, anybody who is walking by and needs a little pick-up, needs a little volume in their hair [laughs]. I would just say anybody who is looking for a reason to really emulate and radiate positivity. Especially through partnering with Aussie and through creating and executing this project, I’ve learned so much, and I’ve been able to really connect with a lot of people. It’s really wonderful having that positivity daily, and just being able to carry that with you is really wonderful. And being able to see that unravel through painting this mural is definitely an experience. So, it’s wonderful to see.