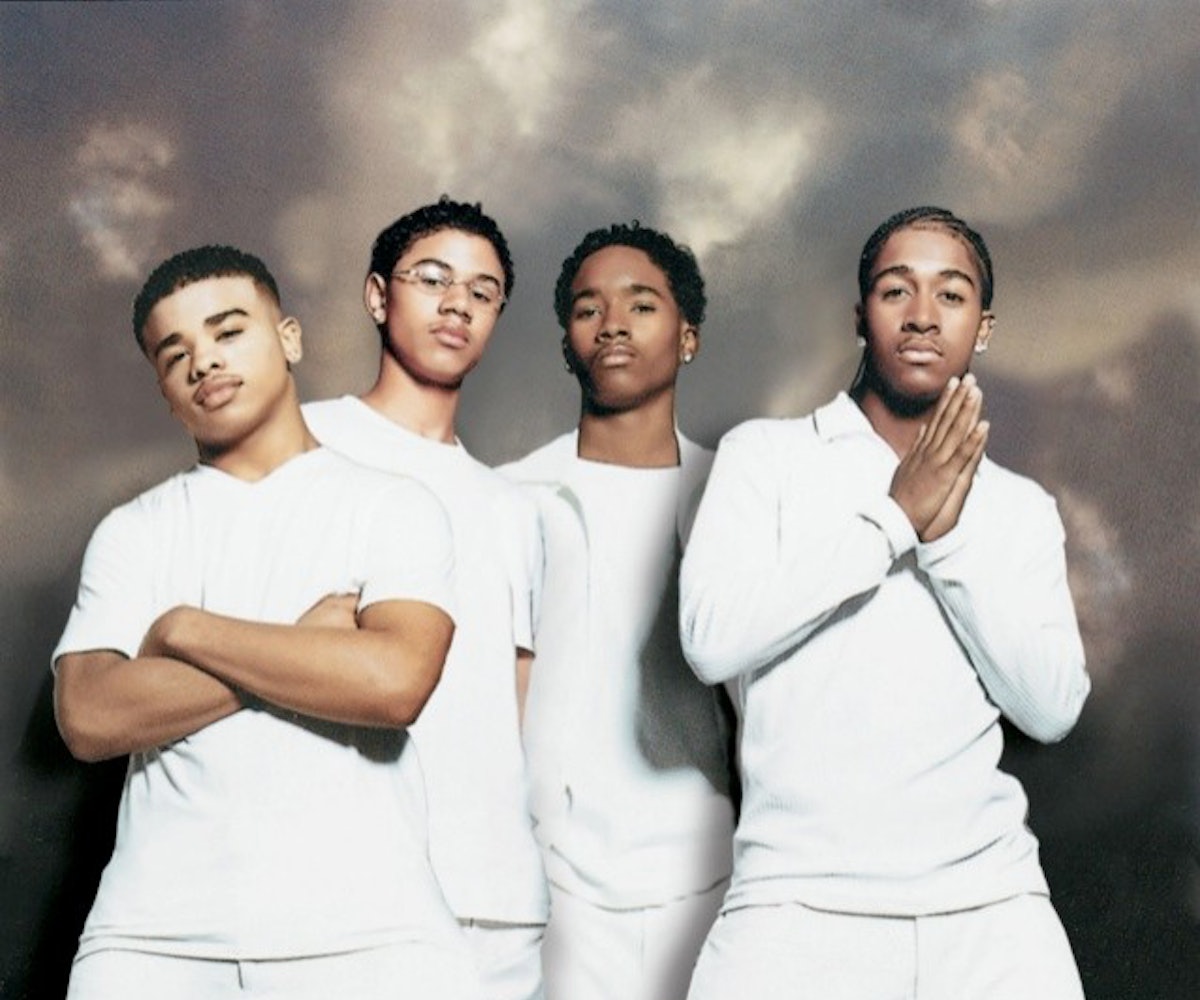 They say you always remember your first love; I sure do. He had long, curly hair that was sometimes styled in a ponytail, but more often in a set of twists. He was light-skinned and baby faced, the kind of lethal combination—I would later learn—synonymous with trouble. He had an innocent sounding voice that lent itself well to his innocent rap lyrics. He also happened to be one fourth of the boy band B2K.

The American R&B group was formed in 1998 and released their self-titled debut album 15 years ago today. It reached #2 on the Billboard Top 200 chart and hit #1 on the U.S. Hot R&B/Hip-Hop Songs albums chart. Lil’ Fizz, J-Boog, Raz-B, and lead singer Omarion were the source of millions of young teenage hormones; their faces peppered the walls of their rooms, their songs soundtracked their middle school highs and lows, and their eventual split broke their pubescent hearts.

But let’s rewind a bit. The year was 2002, Lil’ Bow Wow just dropped the “Lil’” from the beginning of his moniker, and B2K joined him on the Scream 2 tour. Hundreds of girls—myself included, much to the detriment of my father’s eardrums—stretched their vocal chords to their limits in a failed attempt to get the attention of their favored group members, while holding glitter-adorned signs likely declaring their love. It’s the same spectacle you would find at any popular boy band's concert at their prime.

Timeline wise, The Boys of the New Millennium peaked when N’Sync and The Backstreet Boys were waning. They were, by no means, on the same level of fame as the two, but that wasn’t due to a lack of talent. In actuality, one could make the argument that B2K’s dance moves, catchy songs, and the fact that they not only had singers but also a rap component tied in, offered up a more diverse music approach. That might just be a biased former fan talking, but I stand by it. Nevertheless, the quartet grew to be the biggest black boy band in the world, a position formerly held by icons like New Edition and The Jackson 5 before them, and one that’s been left pretty unoccupied since.

As the story usually goes with boy bands, though, B2K eventually parted ways. The reasoning behind the split is where things get messy. Band member Raz-B accused their manager, Chris Stokes, of sexually molesting him at one point. The others denied the accusations, citing other reasons for the split. According to Omarion, it came down to egos. “It is true that B2K broke up but it’s not about me leaving or them leaving. It’s about us growing up and wanting to do our own thing,” he said in a 2004 interview with Jet magazine. “You can’t be a tight unit when everyone is more concerned with their own stuff that they are in the group.”

While Lil’ Fizz and J-Boog’s reasoning also circled back to Stokes, their issue came down to a mishandling of finances on his part. They said that Stokes withheld money from the group that they earned from record sales and touring. “We didn’t break up. We left management, Chris Stokes.” J-Boog told Jet magazine. “Omarion decided to stay. We don’t want to do business with Chris. As long as he works with Chris, there won’t be a B2K.”

And after the release of the dance battle film You Got Served, which came out after the band’s split, there wasn’t. Solo projects were attempted, with Omarion’s notably being the most successful (Stokes went on to produce a handful of his albums), but B2K as the early aughts knew it, was no more. The breakup was quick, but if you look back, their career wasn’t around very long anyway. They came onto the scene in 2002 and released their last and final album in 2004. It was a short-lived but significant career for the young and naïve Californian heartthrobs.

Today, with disbanded band members getting back together every other month, we wouldn’t be surprised if a B2K reunion was on the horizon. In fact, we insist it does. Omarion seems to be the only one still releasing (successful) music. Lil’ Fizz is a regular member on Love & Hip Hop Hollywood. According to his Instagram, J-Boog looks like he works out a lot and is a proud—and still fine as hell—dad. Raz-B, the more elusive of the bunch, seems to be the only one of the four rooting for a coming together of some sorts (he’s also the only one whose social media handle includes a mention of the former band).

Surely, more than a decade later, the dust has settled between the quartet. And if it hasn’t, well, we’ll be waiting and ready with newly-minted vocals, neon poster board, and freshly charged phones for when it does.