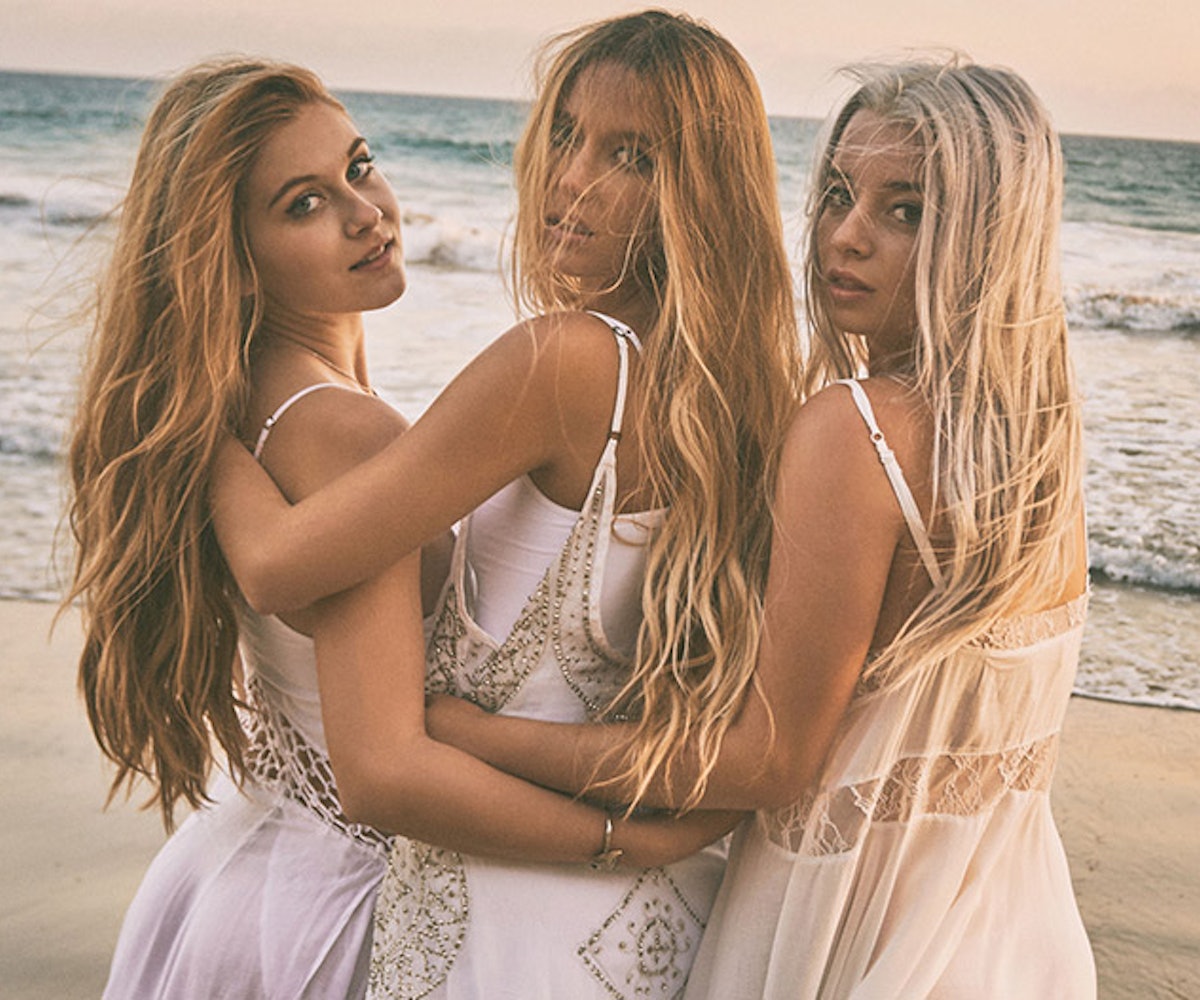 Down on the West Coast, they got a saying. Well, they have many sayings, but they all add up to living carefree. California doesn't get its reputation for nothin'. It's maintained through artists, like Bahari, who make a point in transforming their lives into the California Dream.

The new trio, comprised of Ruby Carr, Sidney Sartini, and Natalia Panzarella, is essentially what California looks and sounds like. Their beachy-pop ebbs and flows like the tides and carries with it the idea that anything is possible underneath the sun. With a new tour about to kick off in New York, the sky is the limit for Bahari. After stops with British chanteuse Birdy, the trio will join forces with Selena Gomez on her Revival tour. That's not too shabby for a group that just released their first EP. We caught up with the group as they gear up for the aforementioned tour. And let it be known, they're just as bright as their music is—if not brighter. No fever dream here. Bahari is the real California deal.

What has been the most rewarding experience since meeting each other and becoming Bahari?

Ruby Carr: I think what’s been incredible, even though we were somewhat put together in a way, we all get along really well and have a connection. It’s incredible to have two other girls to share this experience with. We are always together, and we get to grow up together through the experience of being in a band, which is amazing.

Sidney Sartini: I think also finally being on tour. We are about to start our very first one on the 8th with Birdy, and then we get to go with Selena Gomez. That is so crazy, and we’re so blessed. But it shows our two years of hard work, writing this album and rehearsing, has really paid off. We’ve come so far together. It’s going to be an awesome experience.

Natalia Panzarella: It’s amazing not having to go through it alone. You’re terrified, but you get to do it with your sisters.

What has been the most challenging then?

NP: Being away from home is challenging.

NP: We went on a radio tour for five weeks. We would come back every weekend for, like, a day, but still. We were gone for a while. We were with each other 24/7.

SS: Everyone else’s lives moved on. What happened?

NP: I don’t know. I came back home, and my sister had a boyfriend. I was like, “This is not okay.”

How would you describe your sisterhood then?

SS: It’s definitely a bond we’ve created through writing music and finding comfort in each other through lyrics.

SS: Yes. We chose our family.

RC: Exactly. We spend so much time together, and we know each other better than anyone knows us, and so, it’s basically like we’re sisters. We fight all the time. We’re there for each other.

What’s one memorable story from making your album?

SS: There’s this song that we wrote, but we don’t know yet if we’re actually going to put it out. In the studio, our producer asked, “Who are you singing about?” I was like, “This guy…” We’ll say his name is John. It’s not John. And they told me to sing the lyric and think of him. I started singing, and I just starting crying in the middle of singing. It is such a deep song.

NP: And then I started crying.

RC: They’re both balling their eyes out, and I was like… I just wasn’t crying that day. We have funnier stories from when we were on the radio tour just because we were out doing stuff every day. In the studio, it’s kind of our little safe nest—our protected little zone—but on the radio tour, some hilarious stuff happened. Sidney has a video of her pointing at the sky and saying lightning and then lightning strikes.

SS: We’re in St. Louis, and I’m Snapchatting the giant arch. I was like, “Wow. This is bigger in person!” Then I turn, and I just go “Lightning.” And then it goes foo!

RC: What about when Sidney fell in Vegas? It was a Saturday night, so everyone was out in Vegas, and we were so tired, but we were so hungry. We were trying to find food, and the only place that had food was in our hotel. So we went to the hotel. We ate. It was like 12 o’clock at night at the Cosmopolitan. We were standing in the taxi line outside, and everyone was really drunk. We were obviously not. We were so tired. We were standing there and everyone was screaming, and then Sidney takes a little step back and just falls…

RC: We were so tired that Sidney just fell on the ground and started hysterically laughing.

Oh, man. This tour is going to be fun.

RC: Yeah, the tour is really fun. It’s so tiring and it’s hard being away from everyone, but at the same time, it’s worth it. We get to do what we love every single day with each other, so it’s going to be amazing.

You kick it off in New York with Birdy?

RC: She’s incredible. So talented. I’ve been watching her videos on YouTube for the longest time ever, her covers. She’s so talented, so it’s so crazy.

NP: She’s a true artist, so it’s going to be really cool.

Have you guys ever been starstruck?

NP: So there’s this band called All Them Witches. Do you know them? I’m obsessed. They’re one of my favorite bands, and I saw them play in L.A. at The Echo, and after the show, the lead singer, Charles, he just like walked out. I asked to take a photo with him. He said, “Yeah, let me take the picture.” I just started blabbing words. I wasn’t making sense. There’s this song though that I absolutely love called “Family Love Song For the Leaving,” and I figured out how to play it on guitar and made a cover of it, but I didn’t tell him that. And then I, this sounds creepy, I emailed his manager that night and sent the cover and said, “I met him tonight. I just wanted to show him this song means so much to me.” The next morning, I woke up to this long email from [Charles] personally. The manager actually sent it to him, and he said, “That is so good!”

RC: I went to a concert two nights ago and saw Matt Corby. I’ve never fangirled so hard in my life. I’ve been obsessed with him since I was like 14 years old when I found his music. I love his music so much and he’s also extraordinarily attractive.

SS: I think, for me, the first time when we met Selena Gomez, I was like, “Oh my gosh.” I’m such a huge fan of her. So she was at our studio, and she was eating sushi in the room, and they made this big table so everyone was sitting and we just sat there. We were all really hungry. She was so nice and so pretty. I was kind of panicking. We have the same jeans!

Twinsies. What was your first introduction to music and what solidified you wanted to be pursuing this and actually committing to tour and all of that?

SS: I think together, as a group, was probably when we wrote “Wild Ones.” It made it click for us. We were like, “Oh wow! We actually have a message and a meaning behind what we’re writing together,and it’s having an effect on people.” When we put that song out, it had 26 million streams on Spotify, which was crazy. The label didn’t push it. We just dropped it and then people were like, “Wow this song helped me through this or through that.” So getting to actually have an effect on people or helping people through something—which is what music did for me—was just such a cool experience.

That’s so cool. If anyone, dead or alive, could cover one of your songs, who would you want it to be?

SS: I would want Fleetwood Mac to cover one of our songs.

RC: We covered one of their songs.

SS: We covered “The Chain.” Oh, and Motörhead!

NP: Maybe, like, Jefferson Airplane or something. I think that would be cool with the male and female singers.

SS: I think if anyone covered our songs…

NP: Yes. “Altar of the Sun.” It’s something you can just rock out to.

RC: Exactly. You can just turn off the world and have a good time and dance and just forget about everything else and just have you time.

SS: It’s very empowering, too. It makes you feel like, “Yes. I can do something.”

NP: It’s the perfect song to roll your windows down to and have a great time with your friends.

I feel like all your music encompasses this, but the beach?

That one’s pretty self-explanatory. How has California influenced your music?

RC: Well, I’m from Africa, but I think California, in general, even growing up in Africa, people have such a nostalgic awareness about California. Everyone knows about it. Everyone sees California as this magical place where pretty girls in bikinis dance around on the beach.

RC: Make your dreams come true and pursue your passion and all of that. That’s what I did. I left, and I was like, “I’m gonna go to L.A. and see if I can do it.” There’s something so special about California. There’s a specific vibe that the California lifestyle gives off, and that’s something we really wanted to portray in our music.

NP: We were filming the video for “Dancing on the Sun” like a road trip.

SS: You’re part of this carefree lifestyle that no one really understands until they go. So trying to bring that to people that aren’t from there through our music was a big thing we wanted to do.