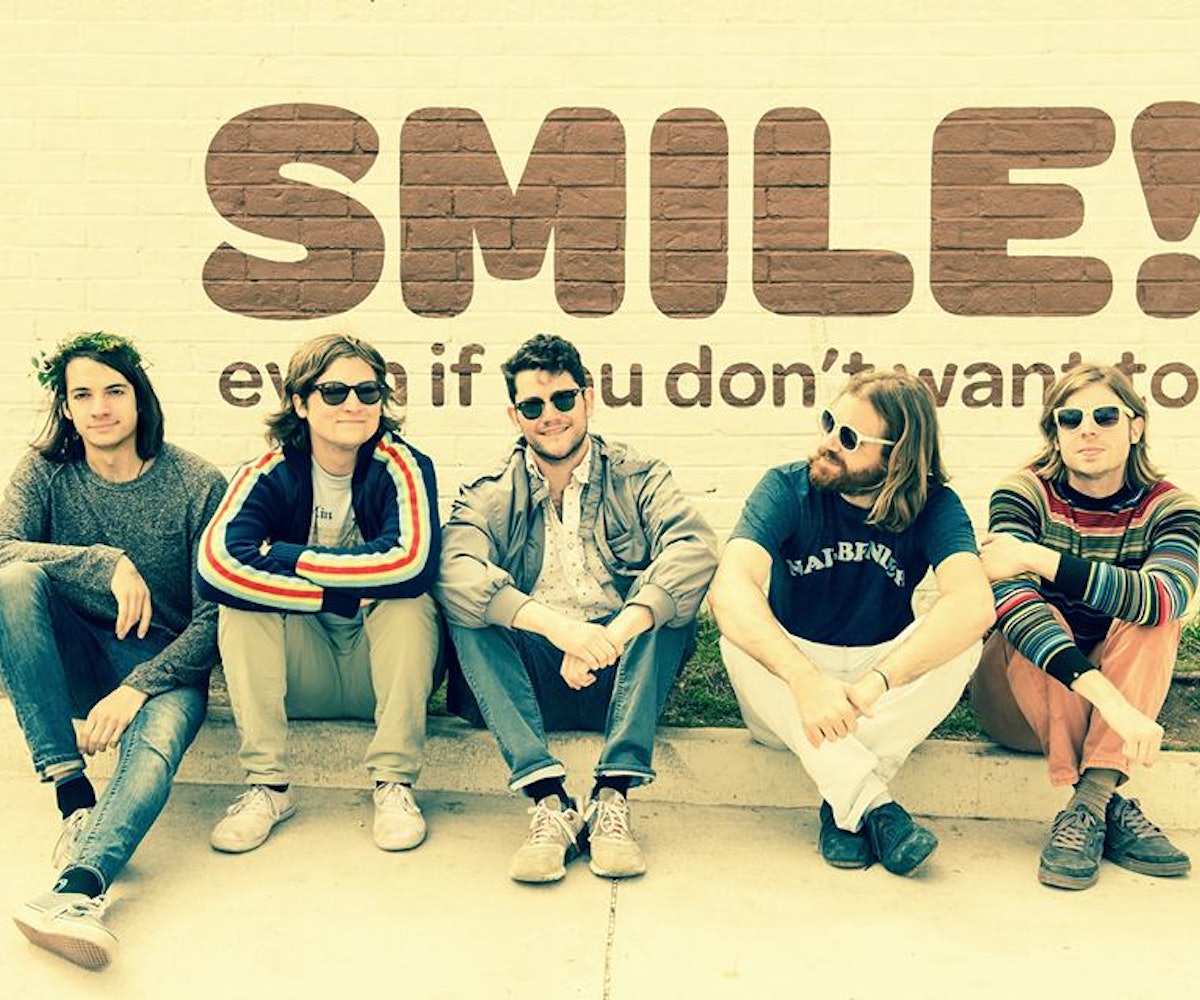 When you’re really, super into a band, it’s hard to think about the fact that they might also just be a bunch of regular dudes who you’d see around at other shows, neighborhood bars, and local coffee shops. The first time I heard Philly’s Cheerleader, I thought they sounded a lot like the kind of band who have a single that's also TV show theme song, or one you immediately recognize from a movie—the kind who you find at VIP sections of parties, and who getting interviews with is like being on a waitlist for a legendary restaurant. And while the five piece hazy electro pop rockers might not yet be at that level of fame and fortune, I think it’s safe to say they someday well.

Until then though, you might just be lucky enough to have one of them teach you drums, serve you vegetarian food, or make your morning cappuccino at the day jobs they current hold around the City of Brotherly Love.

I caught up with the band's Joe Haller, who would love to find out that Cheerleader's self-titled EP (out today) is your go-to record for blasting while you get ready to go out on a Friday night.

What are your plans for October 7, the night your EP comes out?

I think we’re going to be on the road. We’re playing like 20 shows to support the EP. We’re trying to journey out there and play to people we haven’t been able to play to before and hopefully meet some bands and make some friends.

What is your dream band to tour with?

It would have been awesome to have been on tour with The Beatles or The Rolling Stones. Those guys were obviously making music at a time when rock’n’roll was sort of larger than life in a way that I don’t really think it is anymore. I think being on tour with a band in the early or mid ‘70s would have been fuckin’ awesome.

If you were going to take another Philly band out on a date who would it be and where in Philly would you go? If it were me, I would choose The War on Drugs.

That was my first thought, too. The lead singer comes into this coffee shop I work at all the time. He’s a super nice guy. Vacationer comes in, too. They would be awesome to take out. I think we would go for a coffee, maybe take a stroll in the park depending on the weather.

A lot of your songs sound super different from each other. How do guys think that tends to happen?

I think it’s probably because the songs on this record were all written over the course of around five years. Sometimes Chris and I will collaborate a lot, sometimes it starts with me and then we come together after the fact. Or, sometimes we’re also working with the band as whole which as been the case lately. We definitely approach each song as its own thing. Our inspirations and what we’re listening to change as time goes on. There are a lot of different kinds of music that we love and trying to figure out a way to work that into our own stuff gives us a more diverse sound.

Who are you guys into more recently?

We’ve been getting really into Jay Reatard’s album Blood Vision recently that he put out in 2006. Two of my favorite bands of all time are the Beach Boys and Pixies—they’re obviously two really different bands. I also love J Dilla. Tame Impala’s latest record has been one of my favorites over the last few years. We also really loved the Foxygen record when it came out. We’ve been digging some harder stuff recently, too—like a record by this band called Lightening Bolt.

What’s one thing that would have to happen in order to mean that you made it as band? Or has that already happened to you?

It would be nice to make some money—haha. Obviously when you’re passionate about something, and you want it to be your job, having that actually be your job would be super awesome. If we were actually able to quit our day jobs to play music I would definitely count that as a check in a success column.

What do you think your fans are usually doing while listening to your music?

I think that one of our big things when we were writing a lot, especially the earlier songs, is that we’d want people to listen to our songs while driving around with the windows down. This sounds a little hokier, but you know, “What do you put on on a Friday night when you’re getting ready to go out?” It would be pretty cool to be someone’s choice for that as well.

Go scoop up Cheerleader here to play while you're prepping to celebrate TGIF and catch the dudes on tour in your city soon!