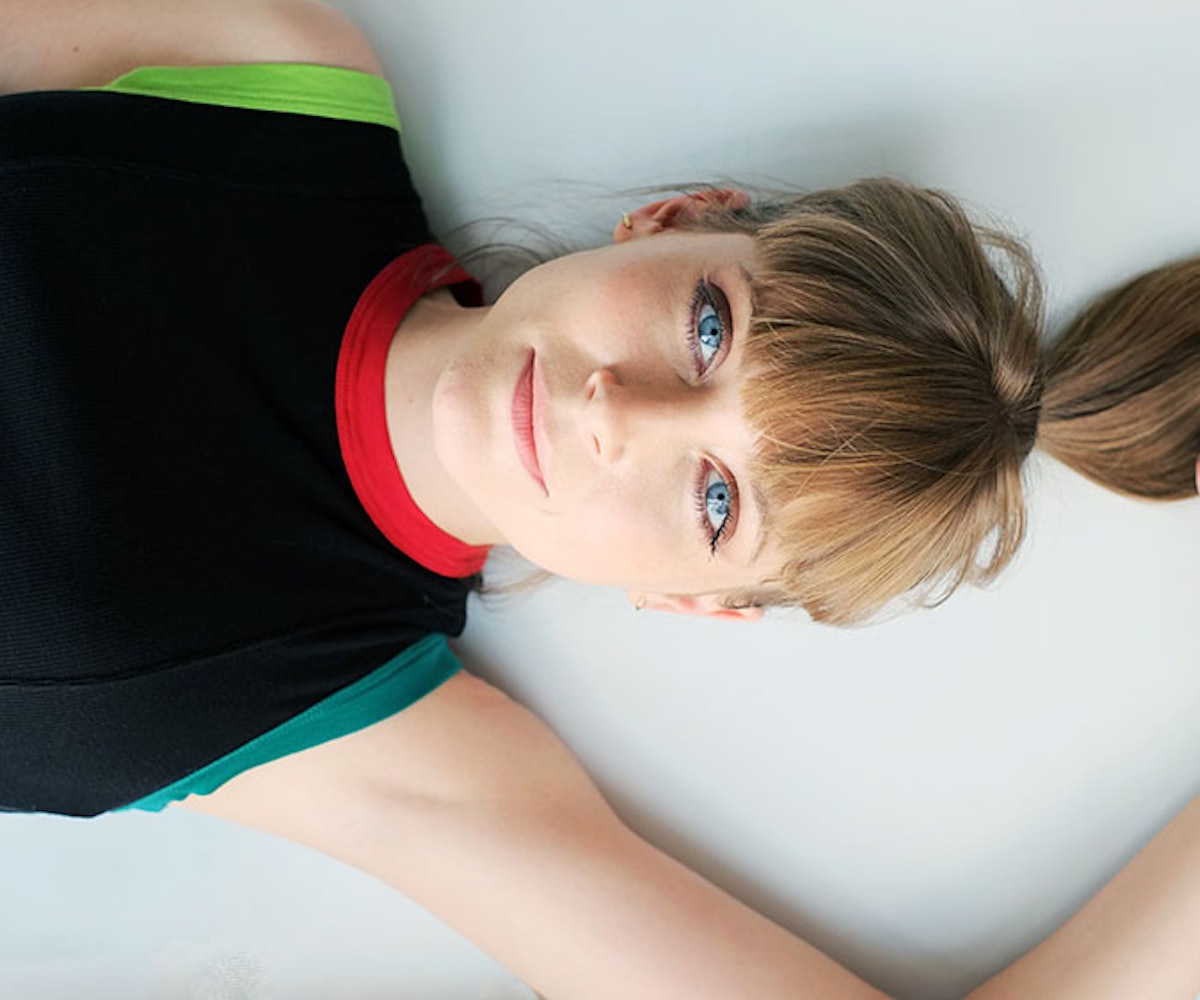 photo by mikaela gauer, courtesy of her habits

Sure, it's electropop, but it somehow manages to be both too-cool and totally approachable: Her Habits has that "It" factor that TV commercial-makers dream of. They create the type of songs that you could put on with your 14-year-old sister and middle-of-a-midlife-crisis father in the car, the ones you listen to while laying flat on your bed with your eyes closed, and the ones that you choose to play when you're watching the sun rise with your best friends. Together, Wolkoff and producer Sanford Livingston have managed to sonically bottle ecstasy in four-minute songs. It's magic, it's wizardry, and if they told you that unicorns were real, you'd believe them.

Be sure to check out the exclusive premiere of the new Her Habits track "True" below, but first, read our interview with Wolkoff below, where we wax poetic about Missy Elliot and post-Soviet music icons.

Do you want to just start off by telling me a little bit about your musical journey and how you first got into it and when you decided to start pursuing it professionally?

Well I was alway interacting with music as a kid because my parents were both musical people. Probably at around 15 I started creating very, very simple 4-track songs with a friend of mine in Toronto who was far more experienced and in the scene than I was. We would create these little songs together about funny topics like earth worms or foreign-exchange students, and it was just an exercise in self-expression and having fun. We used what is now very antiquated equipment. But I didn’t really start to pursue music whole-heartedly until I came to New York in 2006. It started out in some light involvement working on other people’s tracks recreationally and eventually snowballed into participating in a couple of different bands and traveling to perform in the Clandestino Festival in Sweden. Eventually I found myself collaborating with producer Sanford Livingston on the Her Habits project.

What was it about New York in particular that jump-started your musical progression?

New York—and specifically the outer boroughs—really triggered my creative process because they allowed me very relatable and playful exposure to a huge diverse population of people. What makes New York so special for me, in the same way that Toronto is special for me, is its cultural reach.You have such a massive array of demographics, both culturally and generationally. New York is, contrary to its reputation, not a classist place. I think everyone has a decent crack at creating things and accessing some kind of education whether its formal or informal, and that kind of openness and freedom really permeated my whole outlook on making art and story-telling. Essentially, the people of New York and the population of New York and their spirit and their humor, whether they were native to New York or imports from all over the rest of the world, sort of come together to bring the amazing kinetic energy that you sense here everyday and that’s probably why so many creative people and business-minded people gravitate towards it.

What’s your favorite song off your upcoming EP?

For selfish, artistic reasons, probably “Dolla Sign” because it was the one song on the project that I brought to the table that was created from scratch on my end. Sanford did bring it to life with his wonderful velvety production, but I feel an emotional connectivity when I hear that song because I remember how tentative and how new the territory felt when I approached writing it. I sat down with crummy old Garage Band—Garage Band has been like an invaluable tool for me and was like a really friendly beginner-friendly forum for expression so I love it. I love all the other songs too, it was great writing them with Sanford, but that one was like Joanie’s first training bra, like “Wow, look at this, I’m really wearing this song all on my own. No one can tell that they’re still little.”

I can tell on social media that, like almost everyone on this earth, you love Missy Elliot. What about her has really resonated with you?

Well, I appreciate her joie de vivre: her humor, her intelligence, her story-telling, and the way that she has chosen to forge the divide between singer, songwriter, and producer. It's exciting to see a talented person, be it male or female, who is not only interested in expressing themselves, but also in enabling other artists to build a voice and to craft that aspect of music which is paramount to music happening nowadays.

Who are some other artists who have really stuck with you?

This is one of those questions where I’m like, if you don’t answer it mindfully you’ll kick yourself all the way to your grave. We’re not pressed for time are we? Step out have a cigarette, I want to think about this. Alright, well, I would say that in America, this artist is under the radar: Russia’s Alla Pugacheva; she's a great inspiration to me. In her heyday, in post-Soviet Russia, she kind of took all of these skills she built studying in conservatories under rigorous, typically Slavic supervision and started creating this sort of amazing Russian take on what was happening in Western and European music at the time. You know, it’s easy to love Alla Pugacheva because she’s a style icon and she has a larger than life personality and takes younger lovers and would like travel to places like Paris at a time when it was very difficult for people in that part of the world to leave and go perform and come back. I just think she embodies this specter of womanhood, and of musician-hood above all else. Then, purely in terms of vocal stylings, Freddie Mercury. If I had to transition into non-biological manhood to sound like Freddie Mercury, I would do it in a heartbeat. He was an artist who really touched a place of freedom and subtlety with his voice that is so moving and so thrilling.

Are there any Top 40? It's always interesting to see if indie artists gravitate towards those radio-topping hits.

For my money, Jessie J is just the best thing since sliced bread. A lot of people in the states  don’t realize how many hits they listen to on the radio that were written to or collaborated on by Jessie J. "Party In The U.S.A."—what's up Jessie J?! There’s a lot of stuff out there. You know whose awesome? Lady Saw. Is she Top 40? No, but she’s dope. She's a Jamaican dancehall luminary and a hardcore feminist—“saw” like shop class—and she writes hilarious, crunchy, dirty, insightful tracks about agency of relationships and stepping into one’s own. Lady Saw has got it going on and I’m kind of waiting for her to get drawn into some kind of a Sean Paul collaboration or something. She doesn’t need to cross over—no one has to cross over if they don’t want to—but I almost wish there was some way to disseminate the Lady Saw-ness to the world, because she’s dope.

If you could collaborate with any person, who would it be?

This is so cruel! This is like the cruelest question ever. I’m so sorry I’m just like sitting here touching my face and staring into space. It’s so tough right? Because part of you wants to choose someone whose like super fresh and relatively new to the scene, because you’re like “Oh yeah, this person has this explosive newcomers energy,” but then on the other hand it would be so cool to work with people who are seasons, you know, like people who are really veterans. I mean like, can I come back to it?

Yeah, sure. Are there any pop culture phenomena that you’re really finding yourself gravitating towards at the moment?

Yeah, man, like this new thing called the internet is really awesome. I’ve been really getting into the internet lately. I’m not even joking—I resisted getting a smart phone until about a year ago. I kind of felt like social media, with the exception of Instagram, was a necessary evil and suddenly I started to romance the machine and that’s been a big voyage for me. I mean, like, I really cherish pop culture at all levels, from the most obscure stuff to the most hugely expensive, like mass-produced materials across the board I think it’s all valuable, I think it’s all grist for a writer’s mill. I’m really starting to appreciate social media, not just like as another channel for self-expression, because whatever it’s not like we didn’t already have enough, but as a way to see into other people’s perspectives. It’s a mouth piece and it’s also an ear piece; social media is like two soup cans held together by a piece of twine, but you can hand that your listener, or whatever you want to call it your communicator soup can, like all the way across the globe and I think that kind of blows open potential for people in the arts and for mankind at large. I’m bored of hating the internet.

I want you to film a PSA on why everyone should be on the internet.

Get on it guys! Something else that’s really important to add to that is like, I’m most excited about what internet is doing for pop culture. I mean, the internet kind of is pop culture now. But also, it must be used in moderation. Whatever else you write down, make sure you know that. That’s my message to the world: Use in moderation, use with discerning. The internet is an amazing—not a cure-all, but it’s a tool.

Let's end off by revisiting that collaborator question.

Hmmm. If I could collaborate with Mr. Harrison and create the ultimate turn-up banger beach proletariat anthem, then I would have a very cool hole punched in my card of life. Calvin Harris! Slight edit. I just whack up my Harrises. I almost said Harrison Ford.

If you could get Harrison Ford to create a song with you, that would be so awesome.

Like Ed Harris, Harrison Ford, and Calvin Harris on the same project? Yo, but don’t actually write that, because for whatever reason he’ll think I’m just joking and I’m dead serious.