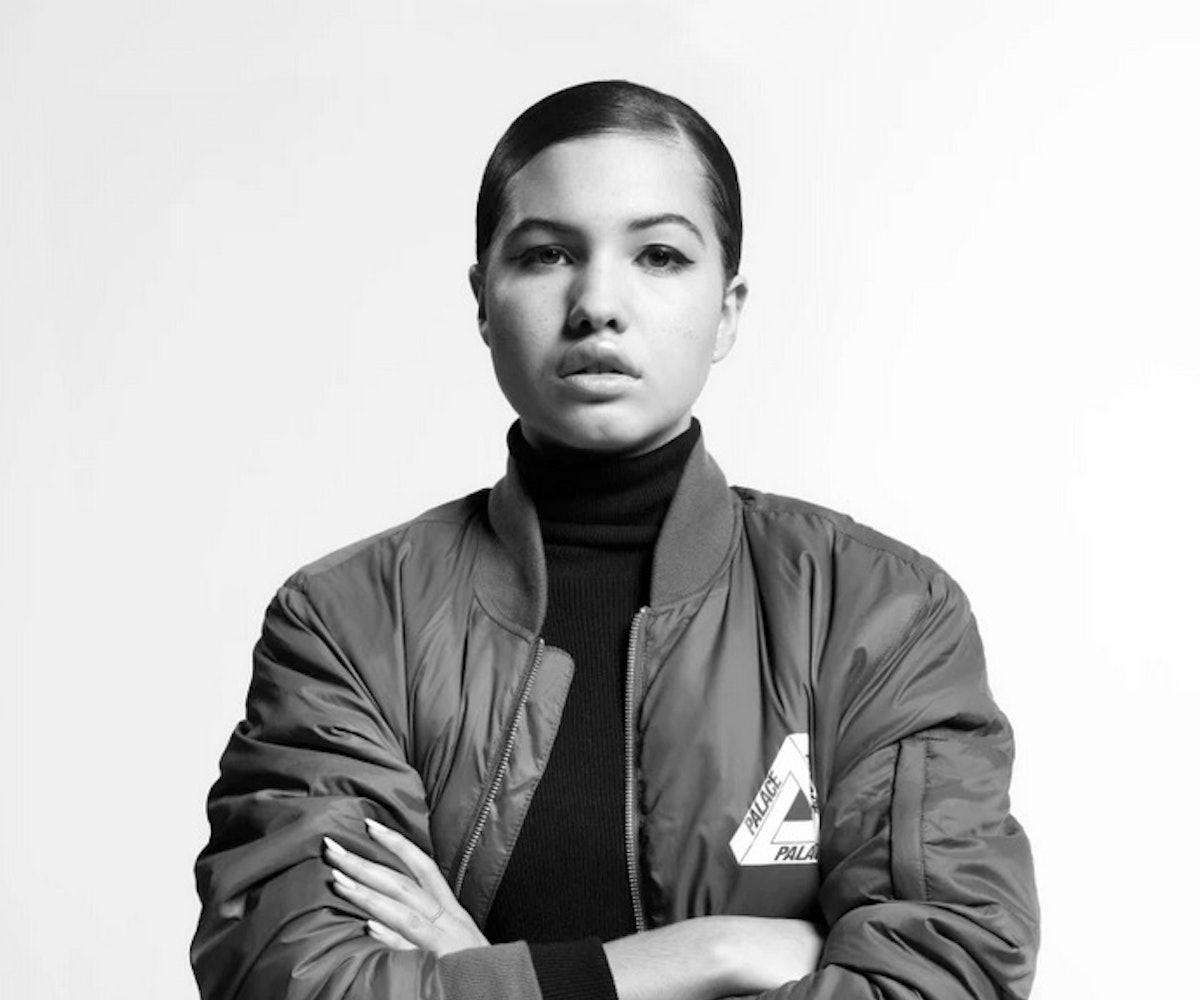 Mabel McVey has never had the life of your average teenager. As the 19-year-old daughter of two musicians—songwriter, rapper, and occasional DJ Neneh Cherry and Massive Attack producer Cameron McVey—her childhood was made up of time spent in the studio, out touring the world, and hanging out with famous jazz musicians who were always writing music at her house. Born in the mountains of Malega, Mabel was raised between Spain, Stockholm, and London. Though she’s lived and breathed music since she was born, she didn’t let anyone hear her songs, and she didn't tell her parents that she was songwriting until she was 16.

Inspired by Lauryn Hill-like beats, Mabel has talent for making music that compliments and contrasts her lyrical storytelling. She writes from a place of vulnerability, but mixes her words with alternative, almost old school-sounding R&B layers. The product is fresh, with funky beats and inventive musical production.

Her debut track, “Know Me Better,” was recorded after she spent some time studying music production in Sweden. It’s a perfect introduction to the artist, who says she wanted to release this specific track first so that people could get to know her better, both as a young woman with a powerful coming-of-age story and as a talented musician and artist.

We chatted with Mabel about her love for fashion and bomber jackets, the writing process behind her debut track, and her eclectic childhood.

You were born in Malaga, raised in Stockholm, and you’re spending most of your time in London. How do you think all of those places have influenced your music?

They've definitely all influenced my music, but I think that moving to London this time around probably made the biggest impact. I learned lots about music in Sweden, as I went to a really good music school. Going to a music school was an amazing experience, but I do think it kind of locked me into making a certain type of music. I became very conscious of what was "right" and "wrong.” When I moved to London, I got rid of the rule book and started making the music that made me happy.

What was it like growing up with two parents who are successful musicians?

When you're a kid, you don't really know anything other than the life you have. I just thought it was normal. Going on tour and hanging out in the studio was kind of everyday life. It definitely had its ups and downs, but now looking back on it, I wouldn't have it any other way. I consider myself very lucky to have been able to grow up around so many creative and inspiring people.

What are the earliest musical influences that you can remember?

My earliest musical influences are probably Stevie Wonder, Minnie Riperton, Justin Timberlake, Destiny’s Child, Lauryn Hill. Writings On the Wall and The Miseducation of Lauryn Hill are two albums that were always playing during my childhood. Me and my sister used to make up dance routines and pretend we were Destiny’s Child.

You studied music in Sweden but didn’t tell your parents about it. Why did you want to keep that a secret?

My parents knew that I went to a music school, but I wouldn't let them hear any of my music. It was because I was worried about what they would think. I guess I just got to a point when I properly realized that my parents were amazing musicians… I'm not even really sure why that scared me, but it did. When I look back on it now, I find it really funny, though, because it's obvious to me that no matter what I did, they would've been proud. Seriously, my mum cries every time I play her my music!

Your friends produced the new track for you. What was that experience like?

Josh Crocker, who produces all my tracks, is amazing and our creative relationship is really good. When I've finished writing a song, I can feel a bit sick of it just because it's a fun but also draining process. Josh knows how to take a song and give it new life! "Know Me Better" was the first time one of my songs got properly produced and mixed, and it was such a great process to be a part of. It was actually quite emotional. But the first time I listened to a rough mix, I was overwhelmed. I think that it was because I'd never had a song be that close to finished before, and listening to it like that, I realized what I'd accomplished.

You write some pretty heartfelt lyrics about vulnerability and coming of age. Do they all come from personal experiences?

All my lyrics come from personal experiences, and that's how I deal with my emotions. I wish I could just decide what I want to write about and then do it, but I have to draw inspiration from something real. Otherwise, I feel lost. Sometimes when I'm writing a song, I can be confused about what it is I'm actually writing about. And then later on, sometimes weeks later, I can properly process it and understand it. I just kind of go with what it is I'm feeling and hope that somewhere out there, there’s also someone that feels or has felt the same. My favorite music is definitely by people who dare to share what it is they feel, and that's what I'm trying to do with my own lyrics.

You have sat front row for Stella McCartney and even ran your own Swedish style blog when you were younger. How do you describe your style now?

I love fashion. Other than music, one of the few ways I express myself is through clothes. I would say that my style now is about mixing really feminine clothes with street wear. I love to wear a tight dress with a bomber jacket and I love contrasts in general. I like to wear high-fashion pieces with really simple things—it's all about the balance. I buy most of my jewelry in really tacky, cheap gold shops and in market stalls, but I love a designer handbag. Above all, I have to feel comfortable. I always wear sneakers, and I'm a sucker for a pair of baggy jeans.

You’ve mentioned that your single “Know Me Better” is about loosing those layers of pretension and control, and really getting to know someone on a real level. Tell us the story behind that song.

"Know Me Better" is of course, a love song. I wrote it specifically for my boyfriend, but as I got deeper into the songwriting process of that track I realized that I was writing it for me, too. The thought of releasing music at the time was really daunting, but I wanted to let myself know that I could do it. And that, although it's scary, I just had to be myself and not let pretension and what other people were going to think get in the way. I think that's why I chose it as the first single. I want people to get to know me, and that song is honest and bare—although that can be scary, it just felt like the right way to go.

What bands and songs are you listening to currently?

I love Ego Death, which is the new album by The Internet, and I love Drake's new tracks "Charged Up" and "Back to Back.” I tend to not listen to too many different things at once. I like to really focus on an album for a couple of weeks and then move on.

When it comes to what’s next for me, there are definitely some exciting things to look forward to. Everything thus far has happened so quickly, which has been amazing. Right now, I'm focusing on making more music and just enjoying the process. I have crazy-big dreams, and as much as I intend to work hard to make them a reality, I also don't want to put too much pressure on the future.