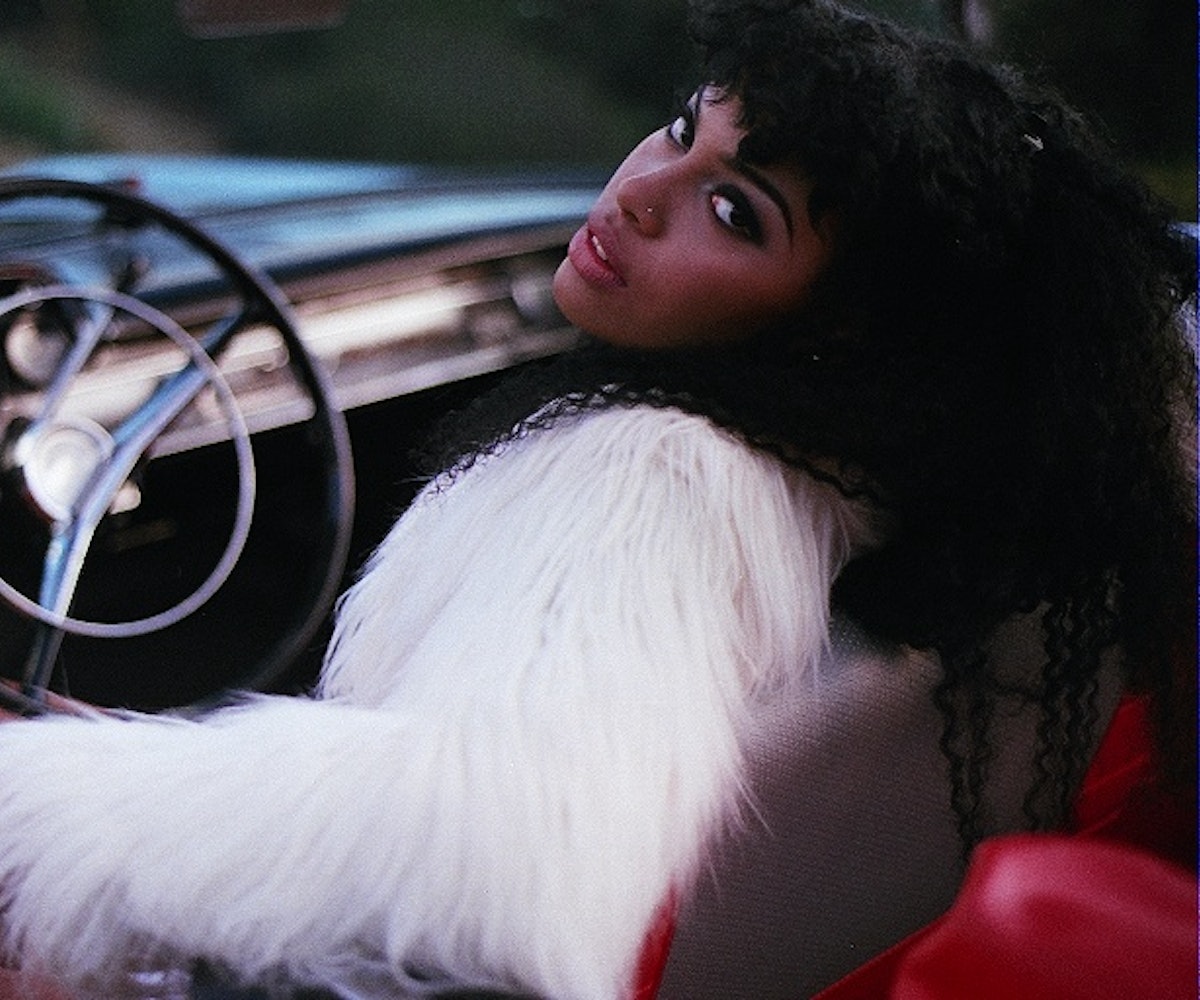 The hip-hop factory otherwise known as New York City produces rappers at an industrial pace. Its latest creation is Leaf, a rapper whose dark-toned music has the potential to break out big in 2015. Recently signed to Fool's Gold Records, Leaf just put out her debut EP, Magnet Bitch, a profane record that combines grit with flash, and showcases her double-threat status: Yes, Leaf can spit, but she's also got an angelic singing voice. Let's get to know her a little better.

I would say my aesthetic musically is future R&B. R&B isn't what it used to be and I think that needs to recognized. My fashion aesthetic at the moment is pin-up retro goth. I pull a lot of inspiration from Pulp Fiction, Scarface, and Kill Bill.

I've been making music my whole life but I would say I started to take it seriously at 14. I started recording out of my friend's closet in the Lower East Side/Chinatown and putting my music on Myspace. That's how I started my buzz around New York as well as throwing parties. However, I don't think I found my sound until very recently with Magnet Bitch.

I hope to have established my brand, made my stamp on the world, inspire girls across the world to achieve their goals, and spread love, 'cause you know it's the Brooklyn way.

I just put out my project Magnet Bitch which is a short EP of counteractive music. By that I mean everyone is saying the same thing, degrading women, "it ain't nothin to cut that bitch off," "these hoes ain't loyal,"... I created the alternative version of that. "N*ggas be thinking they slick, that's why they all on my dick." My next project is going to be my first album, that's all I can say right now.

I can't pinpoint what I'm most proud of right now because I still feel I have much to accomplish before I can pat myself on the back, but everyday that I wake up I'm proud I've made it as far as I have.

I don't know about roommate but I'd have Jimi Hendrix's child. He's the reason I started playing guitar when I was younger and is still one of my greatest inspirations. After a bad day I always come home and listen to some Hendrix.

I love all of the music coming out of the South right now. However, my music taste is versatile, I don't like listening to the same thing everyday. Always gotta change it up.

There's no career that I want to emulate, I think I'm the first of my kind. However, I have to pay dues to any successful woman that has come before me because they've paved the way for me to spread my message to the world.

I love the era I grew up in (the '90s) however, if I had to choose it would definitely the '60s and '70s. It would be a difficult time to grow up but the unity, love, fight for change, and psychedelic culture has always inspired me.

I really like to move solo, so I enjoy doing most things alone.

Most nights I fall asleep creating, but when I get the luxury of winding down before bed I like to play the ocean waves and try to meditate. My grandma lives right on the water in Puerto Rico so it reminds me of falling asleep to the waves.

I try to wake up everyday around the sunrise and meditate. That's the only time I get time to myself some days.

I was more of a quiet rebel. A lot of people hated me because they didn't know me and I didn't open up about anything. I was pretty much infamous for being a bad kid. I got arrested from school when I was 16. A lot of people probably didn't see how successful I was going to be mostly because I was caught up doing a lot of dumb shit, hanging out in Union Square and Brooklyn. In reality though, I was just struggling to express myself, all I wanted to do was music, and school wasn't where I was making any so I wasn't in school you know.

I'm proud of my ability to turn down what I don't deserve and my patience to wait for what I do.

I really like to watch anime and read books.

I want to learn how to drive. I mean I know how but that will probably be my next hobby after I get my license.

I seen this meme the other day that said, "Change the A in bae to a Y real quick." I was rolling.

I want to continue to expand my sound and spread my message to girls around the globe. I feel like there aren't enough females in the music industry for girls like me. Before we had Erykah Badus, Lauryn Hills, Aaliyahs and Missy Elliots. I just want to keep their legacy alive by creating my own and allow girls a space to be a little more then average.

"The most courageous act is still to think for yourself. Aloud." - Coco Chanel