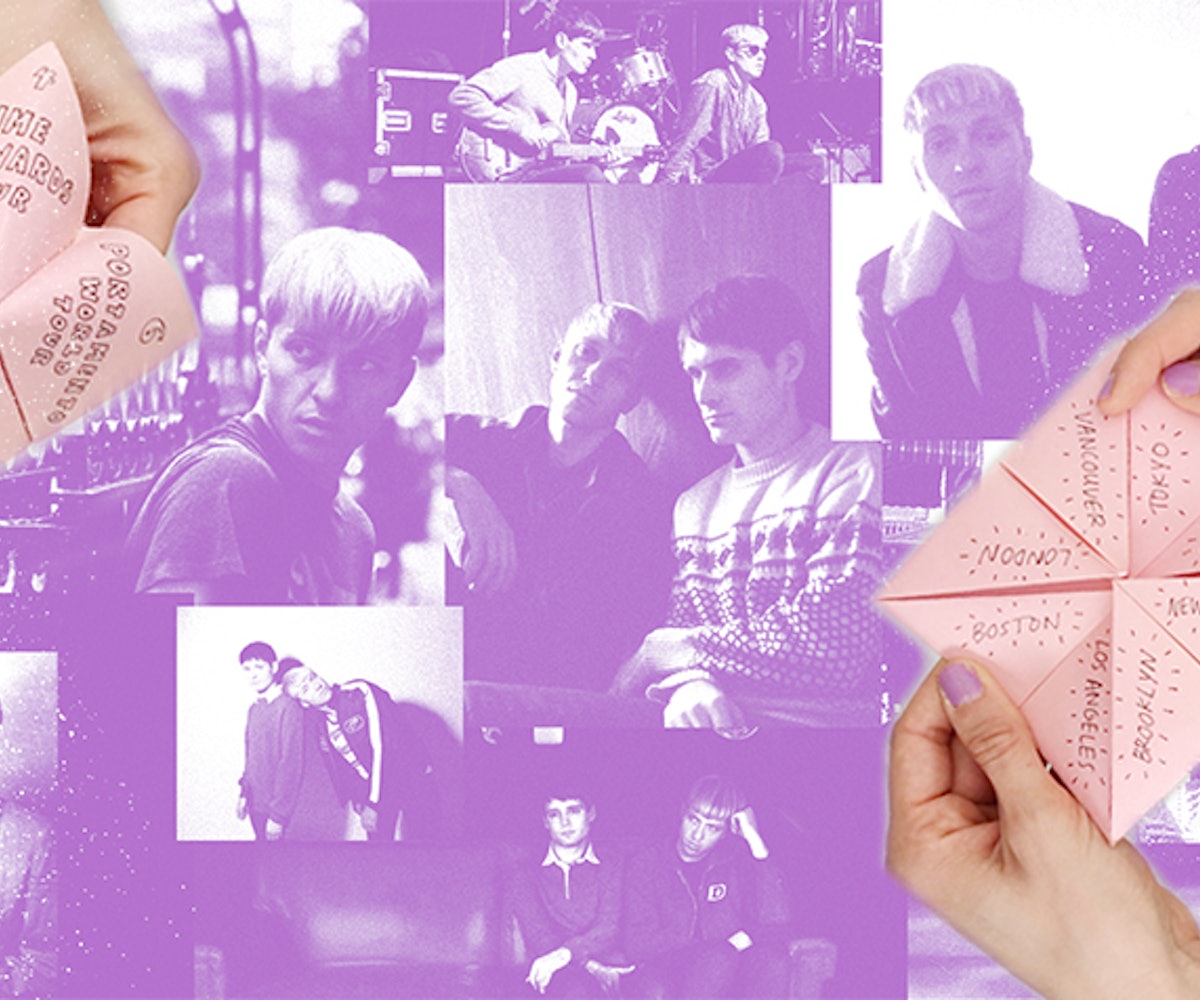 If you're anything like us, you've had today--the day The Drums drop their latest album Encyclopedia--marked in your iPhone calendar with confetti, heart, music note, and book emojis for what seems like forever. Finally, we get the chance to hear the latest tracks from the indie surf rock band who have provided us with the ultimate heartache anthem ("I Need a Doctor"), the ultimate beach roadtrip anthem ("Let's Go Surfing"), and the ultimate regret anthem ("Days Go By"). Now, we get to hear beats by Jacob Graham + the band, and vocals by frontman Jonny Pierce that have quickly (seriously, the album just dropped a few hours ago) become our anthems for summer love that's still somehow leftover in the chill of fall--kind of like a tanline that never goes away.

While they were in NYC last week, myself (NYLON's special projects manager, Jackie Yaeger) and Haley Stark (NYLON's art director) hung out with Jacob and Jonny in their dressing room, just before their show at Bowery Ballroom. Not only did we ask the band questions about being BFFs for so long, what the weirdest gift they've ever received from a fan was, and what they love most about Encyclopedia, but we also made them play our origami paper fortune teller (yes, the same one you used to tease your crush with at recess in the '90s, because, that's basically what interviewing The Drums was like).

Find out what happened in our interview below!

Jacob: When we were kids, Jonny lived in upstate New York and I lived in Ohio. Once a year we would try to get together and hang out, and we'd always bring our favorite analog synthesizer--because that's what we first met and bonded over. We would always have the intention of recording a song together when we were around 13. We'd make a few sounds and then we'd be like, "Eh, nothing's really happening." So then Jonny would be like, well, I have this disposable camera. So we would call his brother in and say, "Take pictures of us with our synthesizers!"

Do you still have those photos? You need to find them!

Jonny: Yeah, I think I do somewhere. My favorite memory is from the time we met. We were both just sleeping on a gymnasium floor and I was playing a record by a band I really loved on a cordless CD player. But no one else liked them and I got made fun of all the time, they were called Joy Electric. They were a weird synth-pop thing from Orange County in the early '90s. Jacob comes running over, he says, "Who's playing this?!" Naturally, by default, I thought he was going to try to beat me up.

Jacob: Try to beat you up? I'm sure I was very intimidating.

Jonny: No, just kind of like, make fun of me or whatever. But, it was the opposite! He was super excited.

Jonny: Then I just pulled out a T-shirt of the same band, and I'm not joking, he just reaches out, and is like, "Can I touch it?!"

Jacob: It was a really rare T-shirt!

What is the weirdest gift you've ever received from a fan?

Jonny: I wish that would happen every day.

Jacob: Back then I was just like, you know, really young and really hungry.

Jonny: No really, he went through a weird period, where he would just like, collect food. We'd have a rider and he would just actually take a pack of ham and throw it in his backpack and then three days later, pull it out and be like, "I think this is probably good."

Jacob: I would put bananas in my shoes because they can't get smushed while they're in your shoes. When the band started I was in full-on survival mode. Before then I worked at Disney World for ten years doing puppet shows. I had been used to living very resourcefully.

If you could take another band out on a date, who would it be and where would you go?

Jacob: I would definitely take Wendy Carlos out on a date. I would probably take her to like a fancy restaurant or something. She deserves the finest of everything.

Jonny: When he says fancy restaurant he really means something exotic, like the jungle...she's still alive right?

Jacob:Yes, she is. Wendy if you're reading this, I love you.

Jonny:I'm going to take my dream person out on a date. Well, I haven't asked her yet. Like, tonight I'm going to ask her. She's here. It's the singer of Beverly. She's so pretty. I just love them.

Yeah, we think they're like the perfect person for you to tour with.

Jacob: Us, too! We're glad you think so!

Jonny: Yeah, we don't have any glitch-y DJs to round-out the night. It's just two bands, like bands. Nobody does that anymore, just plugs in and plays.

Who designed your CD?

Jonny: We do all of our own artwork.

What do the symbols mean?

Jacob: They kind of correlate to the songs a little bit, we haven't said which is which, but we think it could be kind of a fun thing for kids--or adults--to kind of look and guess.

Jonny: For album covers these days, it feels like bands want something really basic, because of music on the Internet a lot of times your album cover is super small. People want a photo of a fist, or a triangle, or the side of a girl's face. Instantly you digest and you know what it is. So, we're classic, like shooting ourselves in the foot, "Let's do something super detailed that you have to look at for a while to take it all in. It tells a story, it has a narrative." Our manager was like....

We try not to do anything that doesn't reflect another aspect of our world: the music, the artwork, we direct our own music videos. We're very hands on like that,  because the second you hand over the responsibility to someone else...you change five percent, you might as well just change one hundred percent. It's that kind of thing for us, while still somehow, maybe in an abstract way, trying to evolve. Always moving forward but also looking back. We always say we're looking into the past while running into the future and slamming into a tree.

What was the best thing you ate in Tokyo?

Jonny: Oh, God! Okonomiyaki! It's like a pancake, it's made with scallion.

Jacob:Remember that one place we just like, moseyed into the last time we were there? It was like heaven.

Jonny: When you go to Japan, the press there like you to do things that are very Japan in nature. So, they did this whole video series of us making our own Okonomiyaki and that was our introduction to it.

Jacob: They were kind of like, laughing at us messing up. We were being all I Love Lucy, being like "Ahhh" "Ahh!" "Arrrgh!"What is your worst memory from being in Boston (Interviewer's Note: Jacob picked Boston because that's where Dr. Quinn Medecine Woman was from)?

Jacob: (to Jonny) Have you ever had any bad memories in Boston? I kind of only remember good things about Boston. The biggest thing I remember is that Jenny Slate came to our concert in Boston and we were really excited!

Stream The Drums' new record, Encyclopedia, out now below. Then scoop up your own copy to have and to hold forever, right here!