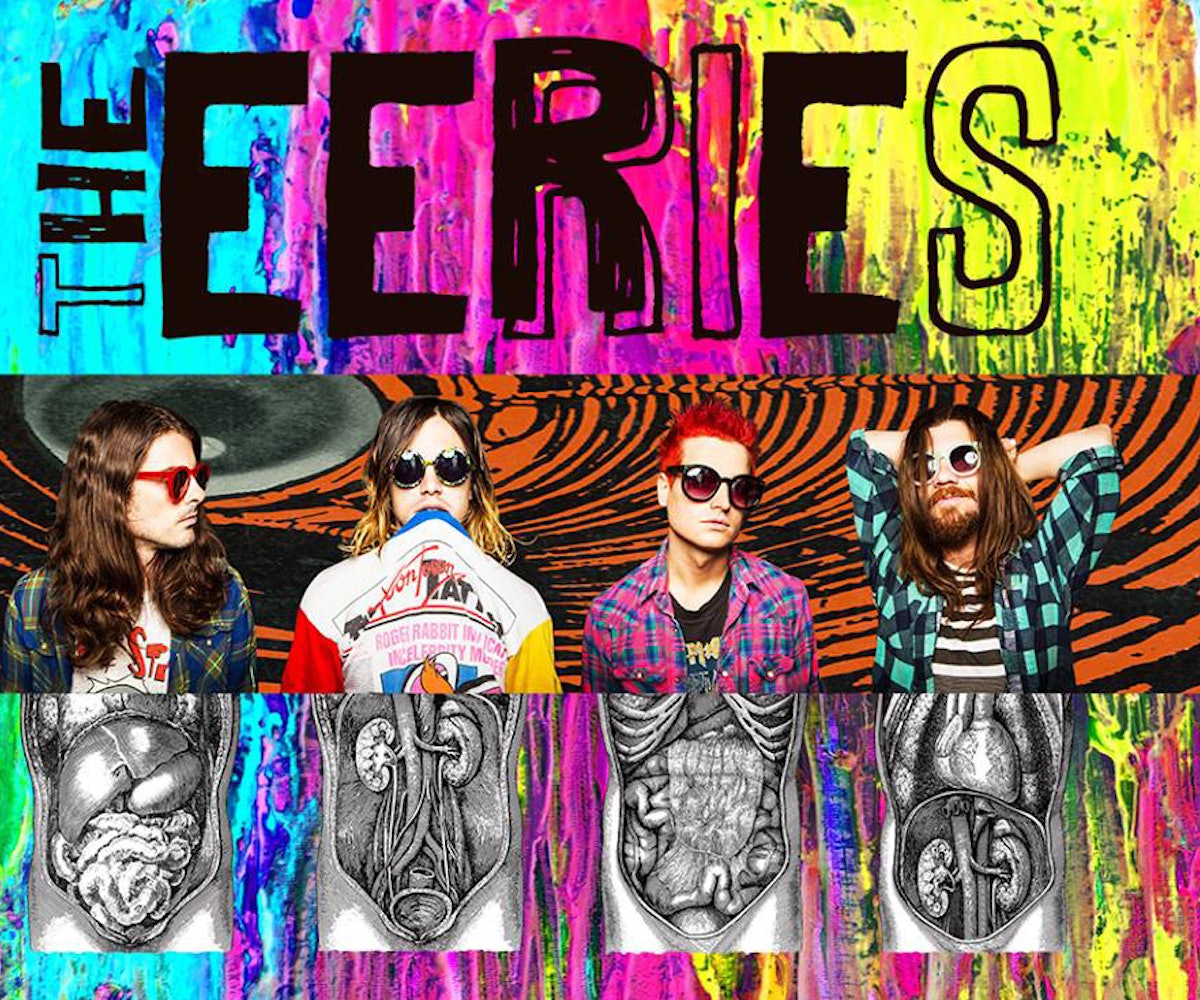 photo courtesy of the eeries

Last July, a then-unsigned Los Angeles band called The Eeries seemingly popped up out of nowhere. With just one fuzzy garage rock anthem to their name, and a few tweets courtesy of Courtney Love and Frances Bean Cobain (who is engaged to band member Isaiah Silva), they somehow managed to make it into just about every angsty pool party playlist in Southern California. "Creating is and has been an unconscious part of our daily lives which, in my opinion, has enabled us to get to this point," says Silva. "Just constantly creating and playing every second with whatever was available to us as kids, teenagers, and adults despite our circumstances. I've found in my life that perseverance has been just as important as talent."

With '90s punk rock tones, veiled critical lyrics, and a touch of pop, the band—comprised of Silva, Brandon Sweeney, Eliot Lorango, and Nadir Maraschin—releasead their debut EP last December. It recalls a time when music was ego-free and not overtly concerned with commerciality. "The fact that we're always listening to each other and trying to make a song as good as we can together is something I've always been proud of," says Lorango. "If a bass fill or drum part isn't working we throw our egos to the sidelines and do what's best as a collective effort for the music."

Currently on tour with The Used, the guys are finishing up their debut album, which will be released later this year. "We started as a band just playing what we want to and staying true to that idea," says Lorango. "The more we play, the more confident we grow playing even more of what we've always wanted to. I don't think we'll become a band that will shy away from that idea. That would feel like reverse growth!"

Isaiah: It's difficult to pin down the precise moment of when our careers as musicians started because we've all been touring, recording, producing, writing and playing live for the better part of our lives. Looking back, it seems like a long series of events that allowed us to provide for ourselves to barely make rent combined with just enough forward progress to allow us to continue being able to learn and grow as artists.

Brandon: Carl Sagan. I could learn a lot from Carl Sagan. If anyone knows if aliens are out there it would be him.

How would you define your sound?

Brandon: Our sound is the sum of all of our experiences. Our love, frustration, passion, laughter, and anger all smashed together and run through a distortion pedal.

Nadir: I've honestly never really thought about it. We kind of just dress the way we like to dress. I like changing my hair color and the other guys have long hair!

Isaiah: I love creating. Whether it be a song or an art piece, so for me, I'm simply proud of building this band from my mind, and with the help of my friends taking it from my bedroom to where it currently resides with people that I love and respect and look forward to seeing and creating with on a daily basis.

Isaiah: That's an interesting question. I want us to be true to ourselves first and foremost. I hope we create our own path that suits us and only us. I also prefer the word inspiration over emulation—we all have inspirations and project them in ways that only we can. Hypothetically, if you and I had the exact same influences and made a record, our records would be vastly different because of our individuality—that's the variable. It's beautiful that we are all essentially the sum of our influences yet we are able to consistently create vastly different art.

Isaiah: Yoda once said "Do or do not, there is no try." Yeah, we're nerds and proud of it.