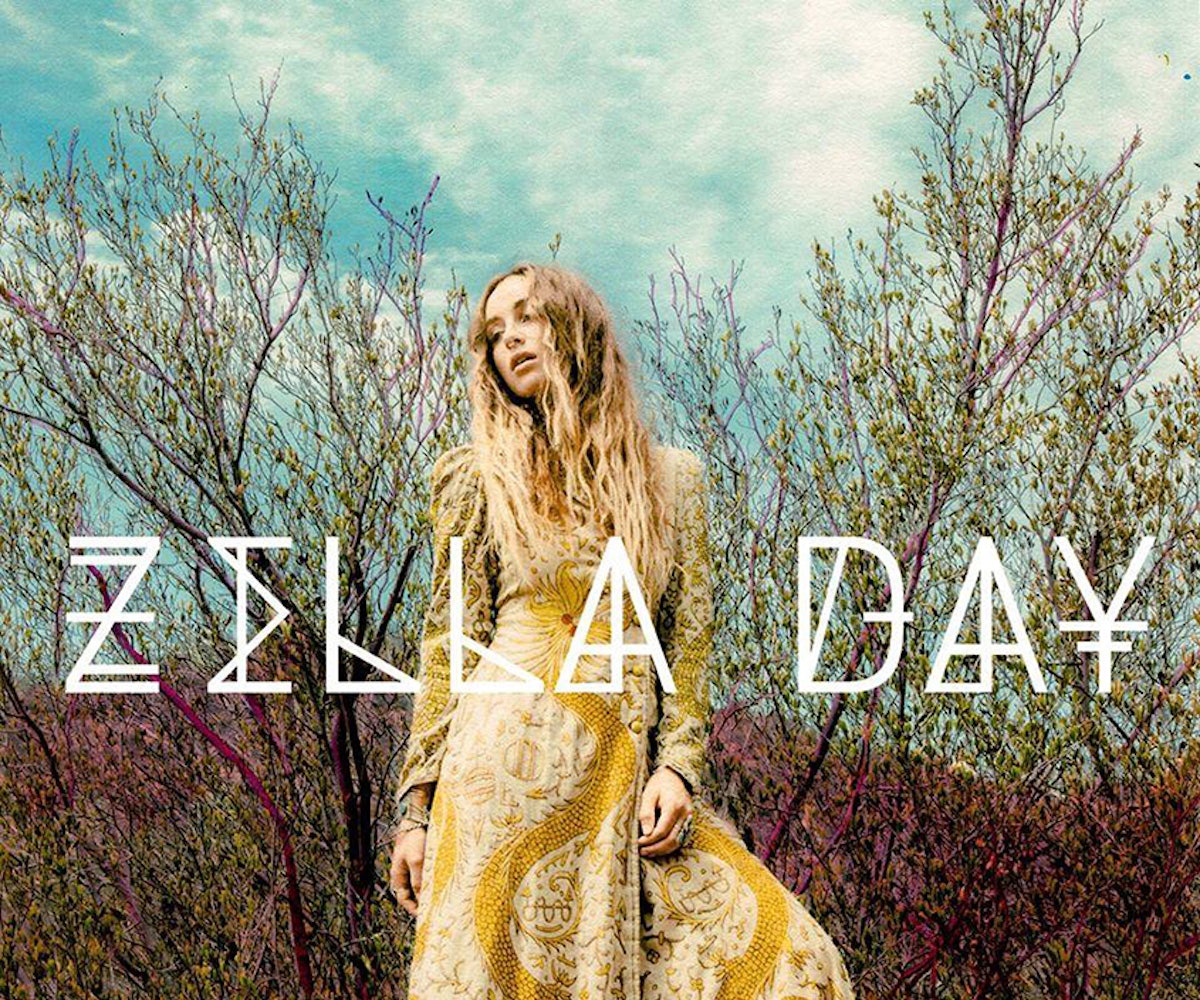 Every pop star has a story about how they grew up, what their influences were, and what made them want to be a famous musician. We normally don't find these things out until their "VH1: Behind the Music" epiosde airs on cable. For electronic pop girl, Zella Day, though, her history is a lot simpler than an entire 30-minute television piece. Day grew up in Pinetop, Arizona, where she ran barefoot into the woods to sing alone with her guitar, and rocked out to the Jackson Five before she hit first grade, "The Best of Jackson Five was huge for me when I was a kid. It taught me how to sing. I was in the back seat just going off when I was like six years old. I was like little Michael Day."

It's impossible for the bed-headed beauty with a nose ring to steer totally clear of her roots, even though she's now based in Silver Lake in LA. "I definitely blended to two worlds together. It’s that perfect balance for my life and my artistry of where I’m from, kind of the mountains and that western influence, mixed with that chic LA scene that goes on here." And it's that same balance that allows the wild-haired free spirit to take on the pop world fiercely, yet gracefully; she's got the sound (a carefully cultivated look to match), and a stage presence that comes with the territory.

While we'll all have to wait an entire year before Day's official debut album drops, we can still get a pretty good glimpse into it with her four-track first official EP, out today (featuring "East of Eden," "Compass," "Hypnotic," and "Sweet Opehlia").

In honor of the EP's release, I had the chance to chat with Zella Day about LA's vintage shops and how she learned to play guitar from The White Stripes.

What was the most challenging part about making this EP?Zella: I’ve been writing music for a long time, ever since I can remember. It feels like I don’t even know what I was doing before this. Throughout the span of my time as an artist, I’ve had many challenges; from being told “No,” to being told that my songs aren’t good enough, to “This is it, Zella.” It’s riding the wave of believing in yourself and going for it, and being very present and confident in the music that you’re making, but also understanding that there are going to be trials and tribulations through out your journey.

How did growing up in Arizona influence your music?Zella: Inso many different ways. When I started playing music there (in Pinetop), nobody else was doing what I was doing. So I had the freedom to be and do whatever I wanted. There was no one to compare myself to. Now, being in LA, I definitely resort back to that place of not being afraid. Growing up in a small, isolated town made me not afraid to express myself in a sense because there was nothing holding me down. It was just me and my barefeet, running out into the forest, playing my guitar and screaming at the top of my lungs. Which is what I did for, like, nine years.

How did where you grew up influence your style, fashion-wise?Zella: When I lived there I was always looking at California and the West Coast as my ideal picture of what I was. I loved the beach and the rocks. In my head, I was a surfer girl stuck in Pinetop. So when I moved out here three years ago, it took me a while, but I started becoming more appreciative of where I came from and incorporating the colors and aesthetic of Arizona into my life. I really love adding old Western pieces into my wardrobe. I have some riding pants that I’ll wear casually out and about. I have some old fly fisherman hats that I love to wear.

Where are some of your favorite places to shop?Zella: Definitely vintage stores around here. I just moved to Silverlake. Ragg Mop is amazing. The Way We Wore is insane. For jeans, I really love American Rag. There are different little spots that I go to. For photoshoots and shows I love getting pieces that I know nobody else is going to have. It’s kind of an art form in itself. I’ve really grown to love fashion because I wan to look the way I sound. I want this music to be something that nobody has ever heard before and I want the same for my style.

"It was just me and my barefeet, running out into the forest, playing my guitar and screaming at the top of my lungs."

Where do you get your septum rings?Zella: I got my nose pierced in Long Beach at this place called Sonatic. It’s run by women and has some serious female empowerment vibes running through that shop. It was a really great experience. All the jewelry they have in there is really gorgeous. My nose ring has diamonds in it. I decided that if I was going to put a ring in the middle of my face it might as well be really pretty and sparkly. When you walk in there you’re like, “Oh my god, I want to pierce my whole body.”

Your album art totally fits your vibe as well. Do you have any say in what that looks like?Zella: All of the say. I have been working with a graphic design artist by the name of Brock Lefferts. He has a band called A Cloud for Climbing and he’s also from Arizona. I met him through an ex-boyfriend. Years ago I was looking through his Tumblr and I was blown away. He was taking the environment of Arizona, the beautiful sunsets and canyons and pine trees, and making them into these psychedelic pieces of art. When I started needing album artwork and single art work, I called him. We’ve been working together ever since. It’s been a really beautiful harmony. I love that each song has its own persona.

What are your go-to beauty tips for being on the road?Zella: I am more of a purist when it comes to beauty. I’ve always been that way because all the women in my life were always very natural and would go makeup-less. For my day-to-day routine, I don’t wear any makeup and my hair has that messy bedhead thing goin’ on. I’ve gone through my phases, but it doesn’t work for me, for my personality. When I’m on the road I have coconut oil because I hate wearing shorts with dry skin. Besides that I have my floral essential oils that keep me really grounded. I love putting the oils on my wrist right before I go on stage as just a little reminder of home, because it’s familiar smelling.

Can you tell me three albums from your personal record collection?Zella: The new Beck album, Morning Phase, has been playing every morning in my house for the last three months. Joni Mitchell, Blue, was definitely quintessential when I was moving out here. Also, The Best of Jackson Five was huge for me when I was a kid. It taught me how to sing. I was in the back seat just going off when I was like six years old. I was like little Michael Day.

Who is your dream musician to tour with?Zella:Right now, Mac DeMarco or Alt-J. From the past, probably my girl Stevie Nicks. That would be so dreamy. I would just end up staring at her, though.

"I was playing “We're Going To Be Friends” at my talent show when I was in the fourth grade."

I know you’ve previously released a cover of The White Stripes. Why did you choose to do a song by them and not someone like Joni Mitchell?Zella: When I was learning how to play, I was learning White Stripes songs. So, I was playing “We're Going To Be Friends” at my talent show when I was in the fourth grade. When I first started working at Wax, I had my friend Joseph Keefe (singer of Family of the Year) in there. We were talking about The White Stripes and he had a guitar in his hand. He started plucking “Seven Nation Army” and I started singing on top of it. We were just kind of jamming in the studio. My producer was like, “Umm, you need to go record that right now.” So we went in there together into the live room, and he pressed record. It was the second time through, and that’s what you hear.